I come to you hoping that one of you can help me understand and solve my problem regarding my Asus Rog strix Z490-E-Gaming motherboard.

I wanted to update my Bios with the latest from the manufacturer’s site (ASUS), for me everything seemed normal for the procedure since it’s not the first one I’ve done.
it tells me that the bios has been successfully installed, the computer restarts 2 or 3 times without starting Windows, citing a no boot problem concerning Aura and since then I have pressed the button to turn it on, nothing don’t want to start. unless I keep the button pressed for 10ths of a second, release it, and press it, it starts for 1/4 of a second and it cuts off immediately.
I tried again by removing all the components one by one and the same.

Everything seems to think that the bios update has messed up and the card is bricked.

I therefore tried to return to the basic version of the bios by going through the bios flashback of my card, the procedure seems correct but still the same problem no start-up and the power supply is not the cause.

I therefore said to myself that the restoration system itself was corrupted and therefore directs me to a direct reprogramming on the bios chip using a mini ch431A programmer and its small clamp which is fine for it. connect.

I plugged into the 128Mb one, I read what’s inside, I save the data on my computer, I delete what’s inside, then I rewrite the chip with the manufacturer’s bios. base that I had before this broke down.
the application tells me that the size of the bios is larger than the size of the chip but I continue as the same procedure. (does that mean that the bios must be contained on the 2 chips?
I read the chip again and compare with a hexadecimal software the original bios and the bios that I have just integrated into the chip.
I realize that indeed BIOS origin: 16388Ko or 16781312 bytes and BIOS after copy: 16384Ko or 16777216 Bytes and that I find myself with a header at the beginning of the file of 4096 Bytes more on the original than the one that comes from be copied to the chip but everything else is the same.

out of curiosity, I even compared using the hexadecimal editor the bios data that I had saved (the one that was in the chip and downgraded to the version that was there before all that happened that I had submitted using the bios flashback.) everything does not seem to coincide after this famous header of 4096 bytes that I do not see.
I have different values ​​on a 30th byte which really makes me think of data corruption during the copy.

I would therefore like to know if someone can explain to me why I have 2 chips?
why the size of the bios is bigger than the size of the chip 128 Mb with a difference of 4096 bytes?
does my bios have to be cut then put in the 2 chips

Thank you very much to those who can help me because I am missing some information to understand the system and thus restore it to its original state.

I put photos of the analysis of what is in my winbond 64mb chip.

That model doesnt have ASUS USB BFB function? This is primary the option to use besides CH341A, for the programmer it requires the bios image out of the CAPSULE, using UEFItool to extract it…

But this wasnt the option you took when updating the bios rigth?
And now incorrect use of the programmer damage the whole SPI…
And the ME FW image is probably on other chip, Asus bios files dont provide the ME image.

yes it has this function, I have already tried to do the flashback but it’s the same, no result.

the bios and other stuff is wrong.

here is what i currently have on my 128mb chip

What should I do to get out of the tunnel?

That model doesnt have ASUS USB BFB function? This is primary the option to use besides CH341A, for the programmer it requires the bios image out of the CAPSULE, using UEFItool to extract it…

But this wasnt the option you took when updating the bios rigth?
And now incorrect use of the programmer damage the whole SPI…
And the ME FW image is probably on other chip, Asus bios files dont provide the ME image.

I updated my bios with the latest from the manufacturer site and for which a lot of people brick their card from what I see now, so I tried to put back the version of the bios that I I had flashback at the very beginning because nothing started, even after the flashback and a procedure that was nevertheless successful according to what the notice says since the light is indeed off and it is indeed flashing when it was his work.
it is for this reason that I go through the ch341A because the evil is deeper.

I know it is always possible to catch up with the programmer but how, I don’t know.

We all know what happened with MSI Z490 series…

Wait for another user opinion, i my self didnt had to recover none of this yet.

That was a very big jump… never do that.

yes it’s a big mistake and all for me is to put this card back on its feet.

thank you to all who can help me get my head out of the water, I know that very competent people will be able to answer this subject.

see you later thank you meatwar

As far as I understand this very long text you have a dump of both the 8MB and the 16 MB chip in original state?

yes indeed, I have recovered the data from the 2 chips in their state with the programmer.
how should i attach them?

ME region has corruption in MFS partition.

Put those 2 files together for a complete firmware image: Use a hex editor and copy the content of the 16 MB file at the end of the 8 MB file thus generating a 24 MB firmware image.

Guide-How To: Clean Dumped Intel Engine (CS)ME/(CS)TXE Regions with Data Initialization Last Updated: 2020-07-22 This guide is relevant to those who need to clean the DATA section of an Engine (CSME, ME, CSTXE, TXE) Region, which is part of a dumped SPI/BIOS image, in order to flash the latter on a different machine of the same OEM model. It is not meant as a guide on how to completely transform a dumped Engine region into a stock Intel-provided one. Although the guide can be used for that some…

Edit:
I doubt that this is the reason for the board not starting, the bios region is perfectly fine and the ME region shouldn’t even have been touched by the update since Asus updates for these boards don’t contain ME regions/ complete images.

Thank you very much for the information,
I would try to do this procedure with a rested head which does not seem to be so simple. when I have some time. and I will keep you informed.

I applied the procedure, I see a little improvement but there are still problems there.
I forgot something ? 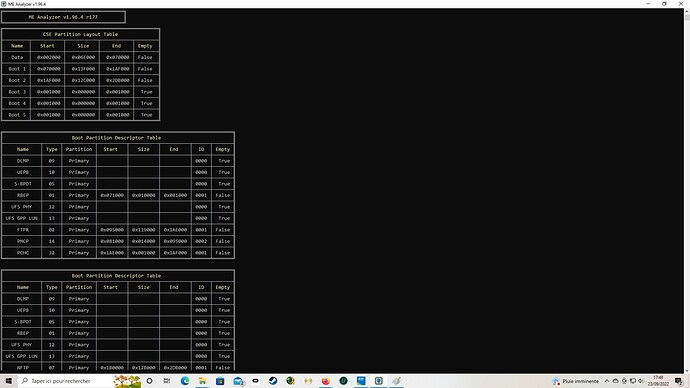 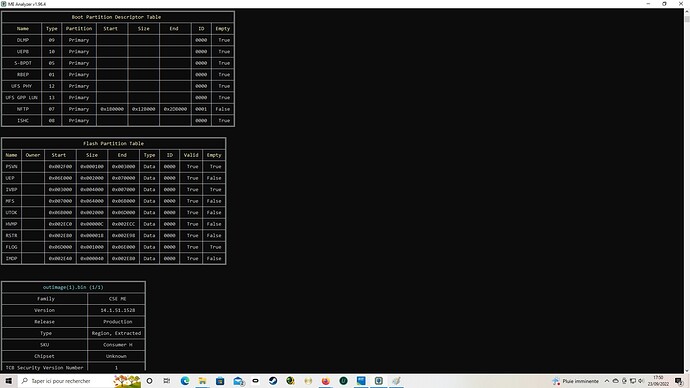 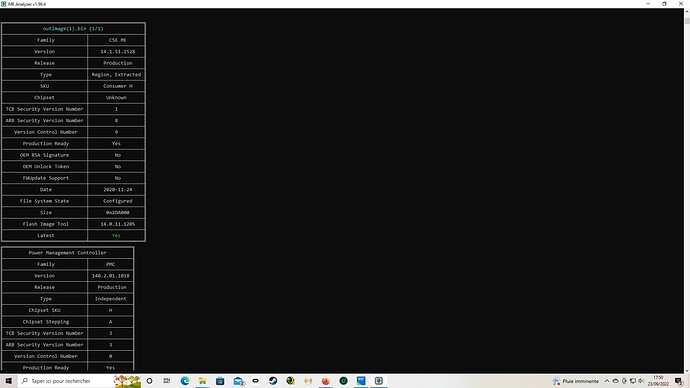 Update your MEA to get proper results.

If I follow the procedure I get no error mesages.

BUT In addition this is one of the firmwares where Asus included a placeholder PHY, not sure how to handle this when cleaning, there were just some cases and afaik all regarding updating, not cleaning. Compare output of MEA for the bricked image, it’ll show you one additional item…