I recenlty changed my computer cpu i7 920 to a cpu Xeon W3690 Westmere WS to give my computer a long life and I find the Spectre problem suddenly spoiling my second-hand purchase. I need help if someone has managed to update the microcode of your motherboard and could upload them. My motherboard is a Gigabyte GA-X58A UD7 Rev1.0 and de CPUID is 206C2. I tried to do it on my own but update the intel microcodes are very hard to understand for me. Thanks in advance.

I need some help. The archive is f9dm extension and q-flash does not recognize it and is not valid to update bios. I changed extension to bin but no solution. Are microcodes inserted in this modified bios? How to proceed?

@Eioneus - Qflash is OK with any file name it does not matter, that means BIOS mod failed it’s my fault, sorry about that I think I forgot to do final step!!

Do not try to use that file anymore, throw it away

Here is new, again if it fails it is not due to file name, it’s possible Qflash cannot be used if your BIOS is currently much older version. If this is the case, to avoid issue, you can flash original F9d first, then do the mod BIOS

Sometimes also you cannot update official BIOS with Qflash either, if current BIOS is very old. In those cases you either have to use latest FlashSPI included in official download (via DOS), or use @BIOS from within windows (not suggested)
That usually happens when there is a new Qflash included in BIOS, or sometimes other major BIOS change may cause need to flash other way first before you can use Qflash again.

After flashing it I found that it works like a charm. Now Inspectre says it is protected and in Intel Extreme tuning software i checked that the last microcode inserted is 0x1E. The two problems that i see is drop in processor performance (working like a w3670) and an older version in marvell controller so i need to put ssd in bypass mode until maybe I’ll reinstall the system in fwmode but obviously that’s not your problem. Thank you so much for everything.

Great to hear, and again my apologies for posting the messed up BIOS earlier! I was in a hurry to get you the file, and forgot to do final step after update and corrections, it resets everything inside again.

Yes, this wouldn’t affect the SSD, unless you weren’t using F9d before. If you want, I can modify any older BIOS you were used to using? Let me know version if you need it!

For CPU performance, you need to set max multi manually and enable Turbo & C1E, or I think you can disable turbo but still have max multi if manually increased to max multi when C1E is enabled.
It’s been a while since I used a UD board, but I remember it was an odd sounding combo there that always got the max multi and kept it locked in

Yes, I put the microcodes into the BIOS in numerical order, you can see all the codes and their release dates on the right in image above, in case you need other CPU later sometime, all those CPUID’s will work in your board

I’m sorry I could not have answered before. The bios that I was using was the f9d modded with drivers updated. I hope you can touch it up as I would be better for sure. To the bios that you offered previously (checksum B600) I found something strange when restarting the computer. It first shuts off and restarts and should not go out. It does not always, but if it is possible to try it with the bios that I send you, which is the one that suits me well, better. I uploaded my bios for you that is f9d checksum 3100. Hope you can edit it for microcode update, thanks. By the way with the configuration that you had commented to me and the turbo enabled the processor goes like a shot, even surpassing the mark for this model.

It’s OK, we’re all on here at different times. Yes, I can put microcodes in the already modified BIOS for you, the restarts may be due to how something is set in the microcodes, possibly something to protect from Spectre. Sometimes this is normal with Gigabyte X58 too, so it’s hard to know for sure which is the source of these resets.

Checksum will change with edit, so probably wont be 3100 anymore.

I’m glad you found good option for the CPU, I couldn’t remember which was best way, but I know sometimes we used to disable everything there to get max (Turbo, EIST, C1e etc) but sometimes it’s better with one of those enabled (Still can’t remember which one for these older models).
Some keep max always, some allow higher max but also allow downclock at idle. Some BIOS you can set max clock with turbo disabled, some you have to have enabled to keep highest CPU multi.

Will edit in your updated already w/ drivers, now updated BIOS w/ new microcodes once I get it done - File is attached now, and this time I remembered final redo step

Thank you again. I have a last question of microcodes, i have a small jewel at home, Pentium 4 Extreme Edition socket 478 3.4Ghz. Are there microcode update for this Gallatin model?. The CPUID is 0F25 and the microcode is 0x2B. I have it in a ABIT IC7 MAX3 with award bios.

You’re welcome! I’ll see if I can mod the ABIT BIOS for you, if so will edit in this thread and post update. I probably can, but don’t see ABIT too often anymore nor 478, so I can’t remember how those old 478 BIOS are built.
I’ll look now and see how it is, will post back soon

* I checked, and I can modify that BIOS, but that CPUID (cpu00F25) has latest microcode for that BIOS Platform in there already (2B and 2C) so no need for a mod. 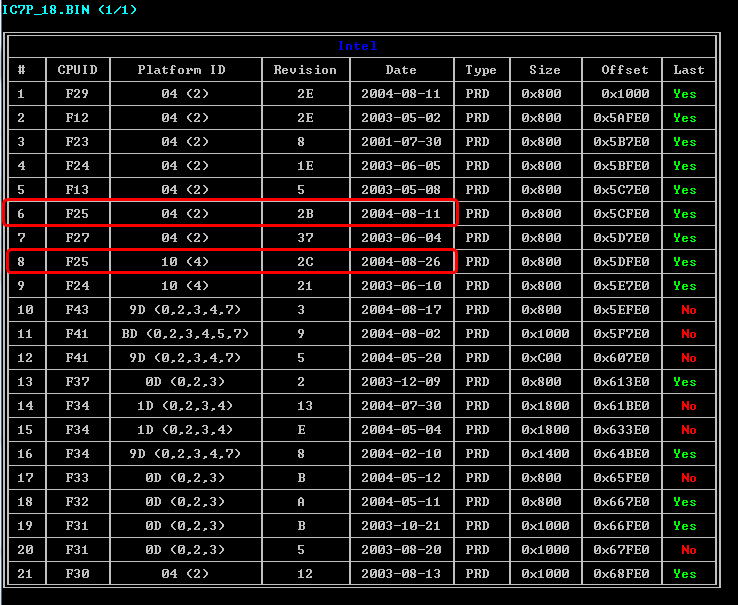 All latest Intel micrcodes are here, if you ever want to check anything for newer versions in the future
https://github.com/platomav/CPUMicrocodes/tree/master/Intel

Ok thanks for the information, in case you need it here is the latest ABIT IC7 MAX3 bios that i have if you want to compare but I guess it will be the same. It contains as a last microcode 0x2B for this CPUID 0F25 processor so I guess there’s nothing to do with this because updated microcode is for different Platform_ID?.

In any case I am ultra happy for the new bios free spectre for my GA-x58-UD7. My thanks to you and I hope that Google searches will serve more people with the same motherboard and the same problem.

Yes, it would be the same, version 18. Both 2B and 2C are already included, those are the latest for both platforms contained in that BIOS.

Do you still have your i7-920? If yes, would you mind putting it back in for a Spectre test?
If you have time, and don’t mind doing that, could you please take an image showing CPU-z main tab, another instance of CPU-z showing motherboard tab, and the InSpectre result app all open in one image and post it here.

If you don’t want to mess with it I understand, don’t worry about it.
I asked because some say due to Intel’s PDF that only Xeon have been fixed for Spectre on X58 with those codes, and I’m not sure and cannot test myself right now, so always try to ask others when I can until I can find out for sure.

I have it and it tempts me to do it but I’m afraid that something else will break because when I installed the w3690 I broke several staples of the cpu heatsink and it grabs just. Also I do not have any thermal paste or product to clean it, I hope you understand that it’s complicated for me but do not worry because I am in contact with people in other forums of Gigabyte to try to offer the bios that you did modified for specter and ask about the results. When I know something I will inform you in this post.

It’s OK, don’t worry I def. understand what you mean! You’ll have to get a new heatsink when you can afford, barely hanging on is not good for heat and can cause the CPU to short out or bug, due to not being evenly pressured into the socket.
Thanks for asking others, I’d like to know and see images as mentioned (2 x CPU-z showing main and motherboard tab + InSpectre result), with Bloomfield and Gulftown CPU’s (non-Xeon ones). Thank you!

Thanks for the bios with updated microcodes! Before I update my PC, I would like to clarify some things…

This is the first time I’m dealing with modified bios and I have no clear idea how to handle them… BIOS is super important, so I don’t want to just flash any one and brick my pc or worse…
Please bear with my stupid questions…

I’m trying to follow this thread and have downloaded the bios files posted but I am having trouble differentiating between the different F9D bios versions. Both you and OP refer to the bios files by their checksums.
How do you find this checksum value? CBROM.exe (ver 1.55 or 1.98) doesn’t show this info at all…

Question to Eioneus:
Can you tell me more about the “checksum 3100 F9D bios” that you uploaded?

The modified F9D bios I found is this one:


I thought this was the one you were referring to when you said "f9d modded with drivers updated". But it doesn't seem to be the same as the one you uploaded (according to hex comparison between the bios files).

Do you have a similar breakdown of the component versions included inside your F9D bios?

Hi! No worries, even if something went bad, very cheap to recover using CH341A flash programmer and SOIC8 text clip cable, $3-4 each part.

I did not refer to any checksums personally, I was only replying to what he mentioned. Checksum is showed to you by Qflash, the built in BIOS flashing program within the BIOS.
Sorry, I cannot remember the algorithm or method used to get the Qflash checksum value. If you get all alphanumeric values then it’s OK to flash.
You can enter Qflash by pressing “END” key at bootup like you press “DEL” to enter BIOS, or by pressing F8 once inside BIOS.

Edit, found it! Here is where checksum for Qflash is coming from, overall file 16bit checksum
On the right, BIOS from post #7 he said checksum 3100 / On the left BIOS I made from post #4, he said in post #7 checksum B600

The BIOS I provided ending in .9d2 at post #4 above is stock BIOS from Gigabyte, with only updated microcodes, no other changes. The BIOS you linked above was built from the same, but has already been modified with all you quoted there (Except AHCI 1.20E is standard already), and no microcode updates mentioned.
The BIOS he mentioned is probably modified by someone else, at a different date, possibly with same or different changes and also probably no microcode updates ether, since that was his request here.