Hi, just a small note. In the OP, one of the images is missing for me

Starting from CSME 12+ , the main CSME firmware must first be combined/stitched with one or more obligatory IUPs , before initiating an update procedure via FWUpdate tool. Whenever CSME + IUP merging is required, equivalent instructions and firmware are provided below. The following CSME/IUP Table lists the CSME 12+ firmware Major.Minor versions which require the presence of IUP(s) and their respective versions or SKUs. You’ll need to consult this table while following the update instructions below to choose the correct CSME + IUP combination for your system.

All (CS)ME >= 8 and all IUP firmware are defined by a Security Version Number (SVN) like 1,2,3 etc which is used to control the possible upgrade/downgrade paths provided by Intel’s FWUpdate tool. The SVN gets incremented if there is a high or critical security fix that requires a Trusted Computing Base (TCB) recovery operation, a significant event in the life cycle of the firmware which requires renewal of the security signing keys in use. A downgrade to a lower SVN value via FWUpdate tool is prohibited whereas an upgrade to the same or higher SVN is allowed. For example if your current firmware has a SVN of 2, you can update to another firmware with SVN >= 2 (for example 3) but you cannot downgrade to another firmware with SVN < 2 (for example 1). Trying to flash a firmware with lower SVN will result in the error “The image provided is not supported by the platform” or similar. To view the SVN value of any (CS)ME or PMC firmware, you can use ME Analyzer tool.

In the gap of the quoted section there appears to be a line of code linking to an embedded image of the chipsets and PMC/PCHC/PHY sub modules. It was/is a useful visual guide for me - is there any way it can be restored to displaying how it was? It did survive the original forum move, but has since disappeared.

Hi, just a small note. In the OP, one of the images is missing for me

Weird, some formatting issue. A space was apparently needed above the image tag. It is fixed now. Thanks for bringing this to my attention!

I have tried and build a FW update for my rocketlake and i get the following results, there are some changes in the sizes of the firmwares and there is also the “file system state” being unconfigured vs the original fw from bios as can be seen in the picture, i also get the warning bellow about the missing 4k alignment padding but that should pose no problem has been stated in this thread.

If plutomaniac could have a look at the comparison it would ease my mind to go ahead and flash this on a very recent (new) pc, since the manufacturer is neglecting the IME firmware as shown.

2 posts were split to a new topic: Unlock undervolting for Dell G15 5511 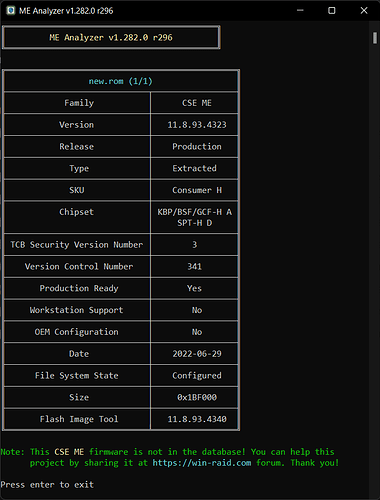 Thank you. Whole ROM image or a way to extract just the CSME? (ROM anyway

Done at OP, thanks!