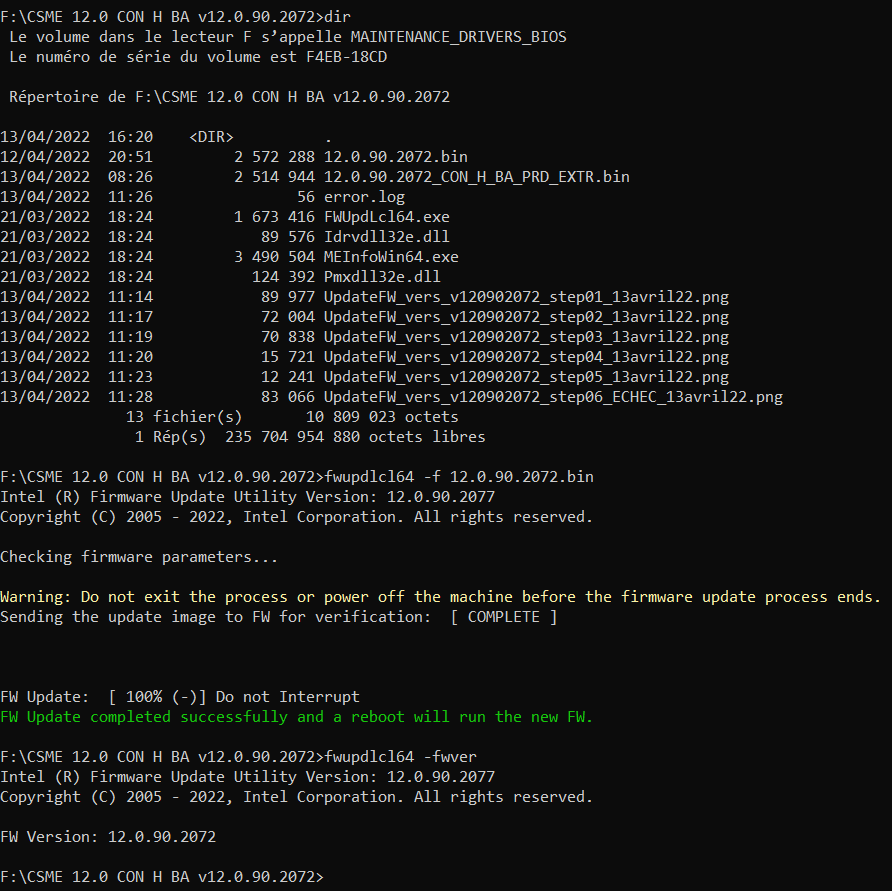 I have read the first post regarding updating CSME12. This procedure is too complex for me.

I’m afraid you’re the wrong target audience for this thread, then.

@plutomaniac
Attached find the TGP N 11.225 PHY I was missing on the list of the start page. Maybe it will help someone ?

…Attached find the TGP N 11.225 PHY I was missing on the list of the start page

When I tried to make an image to update ME (with ME img, PMC and PCHC), FIT give me issues about missing IOM. Can I get it somewhere, or take it from my current machine? Also Can I update NPHY and TBT? It is strange to see TBT on a system without Thunderbolt.

If I use the last tab on the left side ‘FW Udate Image Build’ there’s no complaint at all. If I look into the ME update file of the original Dell update package the only difference is that MEA states ‘OEM Configuration Yes’ for the Dell upgrade file. This OEM partition is different for every ME included in bios 1.17 to 1.19 and contains a signed manifest (?), so wouldn’t make sense to copy it.

I have an BIOS that is locked from Advanced Features which I would like unlocked.

I have installed Intel ME drivers and software, downloaded what I thought was the correct CME for this (CSME v16.0.r7).
I have greatly misunderstood all this and don’t know enough.
I have installed python 3.10.4 and downloaded the MEA.py from the link provided but could not install it as prescribed at the page for MEA.py download.

Installed are the prerequisites as prescribed there with the past command failing with “pysinstaller is not found to be an internal command or could not be found.” < close to this.

I have a few snapshots but it looks like cannot upload here? from HWINFO64 and when I tried to run the command
“pyinstaller --noupx --onefilfe MEA.py”.

What do I need to do next?
Would please help?
Thank you kindly
stumanchu

Which is this link… https://www.station-drivers.com/index.php?option=com_remository&Itemid=352&func=fileinfo&id=3435&lang=en

Doesn’t appear functional anymore. Or I can’t figure out how to get it to work. Is this just gone? I already tried a Google search and am not sure of a valid replacement. I think there was a Lenovo link I didn’t try yet, but… A couple others failed similarly (acted like it existed, but trying to download failed).

Thanks for all this information either way

Let’s hope we soon can collect all the missing firmware versions around… looking for 14.1.65.1969 Cons H.

Good to see content has been synced now, only the blue color of the links on the dark background is

Agree, the blue is too strong/bright.

I know everyone is very busy with the new forum, but maybe someone has an answer to my question posted before ?

I’ve fixed all the (Intel & SD) broken old driver links at the OP.

The migrated posts are a completely different experience, compared to the ones we’re natively (to this platform) creating now. New posts should work automatically with light/dark theming, but old ones are their own thing. There are various issues: format is ugly/raw html and needs manual conversion to MD or bbcode, colors need to be removed for proper visuals, some html elements are deprecated but were still allowed at the old forum software, so they may break without careful adjustments etc. Basically, all important/complicated old posts need some (probably manual) love by their creators to look good here. That is to be expected when migrating from such an old/deprecated/proprietary forum software. Anyway, still WIP. These will be fixed in time. Focusing on the more important things for now.

How CSME/BIOS updates are handled is vendor-specific for the most part. Some other systems may work exactly as you described, others not.

Here is the corresponding security bulletin from HP:

Intel has informed HP of potential vulnerabilities identified in Intel® Boot Guard and Intel® Trusted Execution Technology (TXT) for some Intel® processors, which might allow escalation of privilege. Intel is releasing firmware updates and...

The FW versions at the OP are up-to-date based on what has been found so far (including HP). When 14.1 CON H becomes available, it will be posted here.