[REQUEST] MSM Driver Update ICH10R - is that the right way? What can i do?

Hi there,
i want to build up my NAS with new HDDs and hardware i have.
My disks were not or wrong recognized in the Intel msm.

I read a little about INTEL Storage Problem with old raid controllers and newer HHDs and thought, i’ll give it a try and update the msm module with a new bin as described in your posts
Sry don’t found the BB codes for URL wrapping

worked out well. But nahhh the controller still recognizes the HDDs as 746.5GB instead of 3TB… 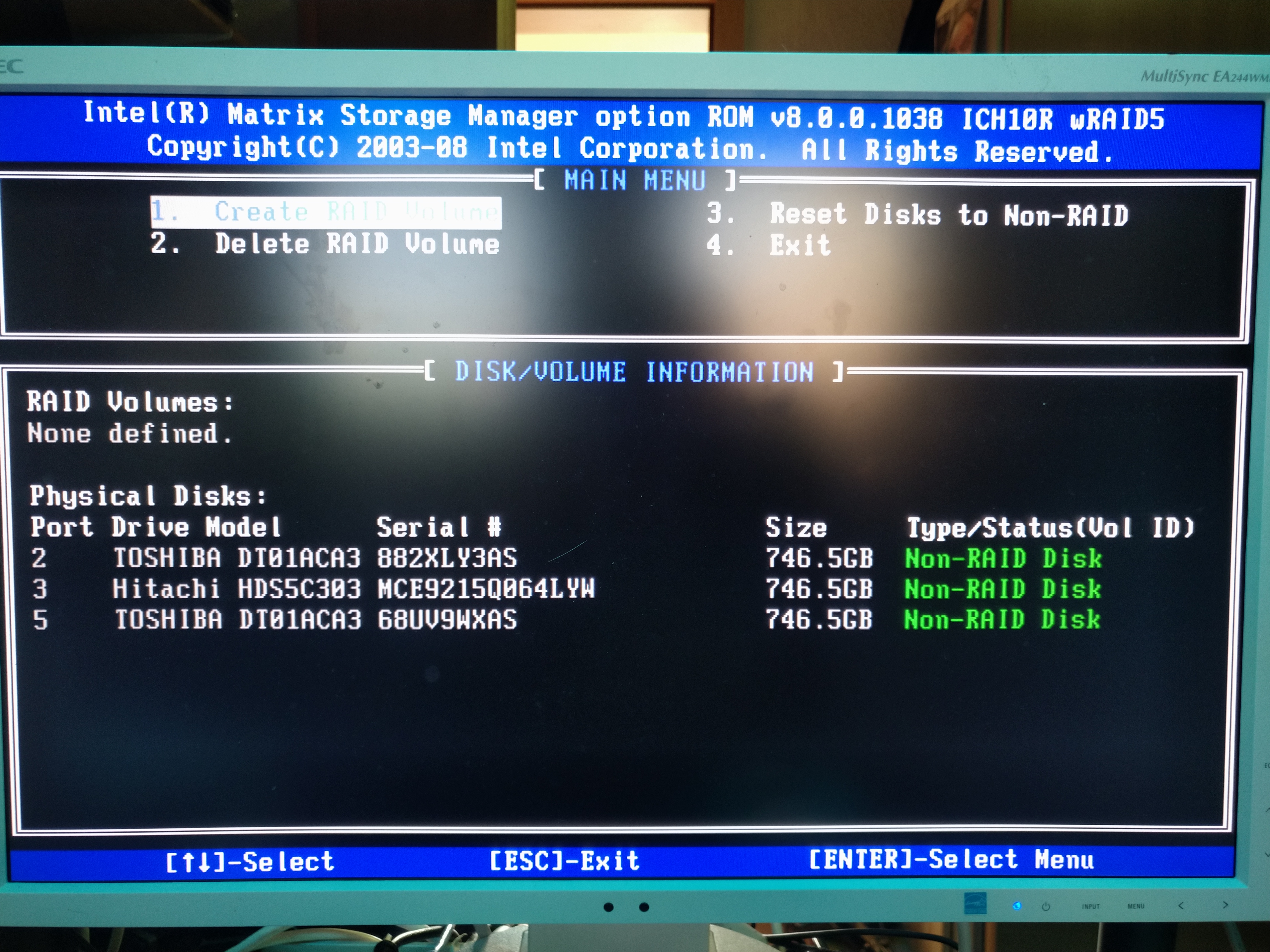 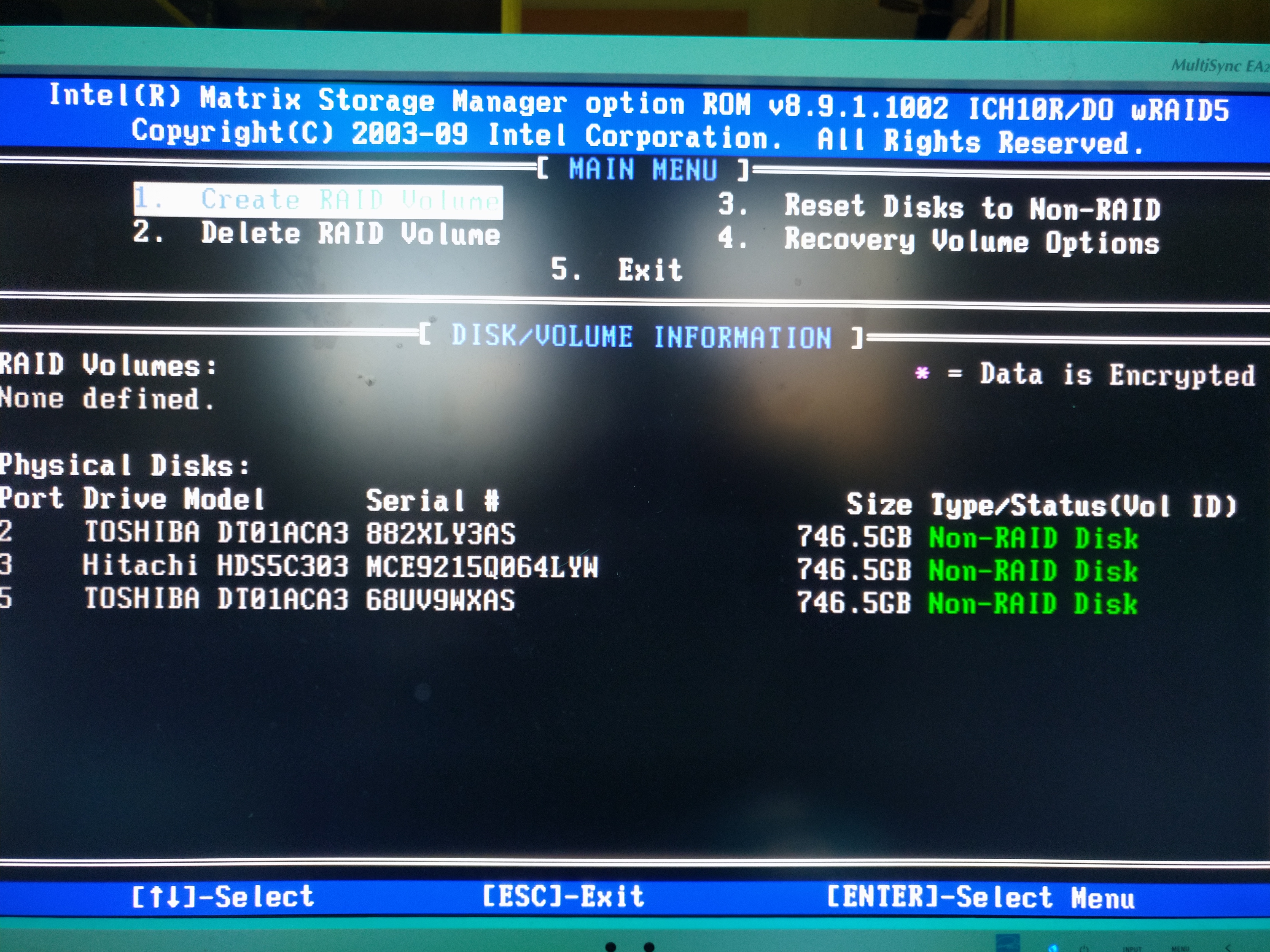 The MoBo i use is the P5q Deluxe

if that is the wrong section sorry.

Andy last but not least. Thank you for your great work with the tutorials

@Lithos :
Welcome to the Win-RAID Forum!
Here is my comment:

Thank You very much @Fernando !
I looked up the List and found megatrons record.

I don’t know why. either i could not figoure out where the JMicron is in my bios rom. Since there is no VendorID for it within the entrys in the MMTOOL. Maybe i am not deep enough in that Tech-hole.
Is the JMicron embedded elsewhere then wiht a PCI Option?

But the hint was gold so far =) . After some research, and old posts that included discuss between megatron and you about drivers, try and error i could archive something:
The combination of >Marvell 61xx RAID ROM v1.1.0.L75 for DEV_6121< and >Intel RST RAID ROM v10.5.1.1070< from your AHCI & RAID ROM Modules post did it for now! yay

My drives in Full size firework 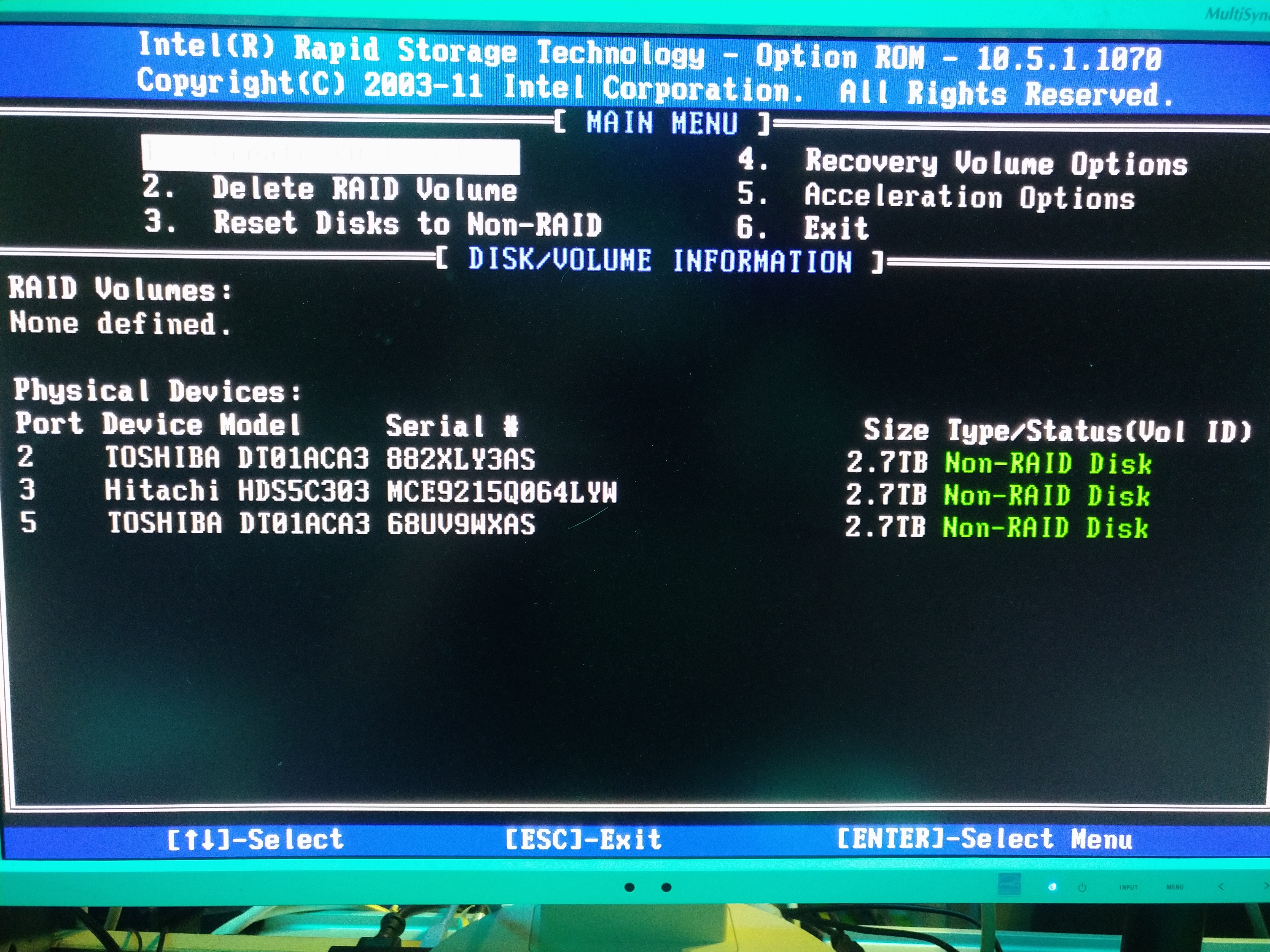 I am going to set up my NAS in the next days, and take the installation as a test. afterward i dig some more through the forum and will post the result.

Again thanks for your fast reply.

OT
After flashing my old P5Q several times and try things out. Hitting right timed the pause key to lookup entrys. I notice once again i hate most of that new UEFI BIOS…

@Lithos :
1. The P5Q and the P5Q Deluxe mainboards are different.
2. The JMicron Option Rom will only be used, if you are booting off an HDD/SSD, which is connected to the JMicron SATA port.

Yes i mean the P5Q Deluxe and wrote only p5q.

Okay, i get some trouble. I hoped that would be the solution already.
With >Marvell 61xx RAID ROM v1.1.0.L75 for DEV_6121< and >Intel RST RAID ROM v10.5.1.1070<
When the RAID is selected as storage option. i can access the msm ui and the hdds are correct recognized, even a RAID can be setted up proberly and is still shown after restart in the msm ui. but i can not get any further.
it seems to freeze after the msm setup ui or if i doesn’t enter the msm ui. if i enter it and leave it nothing happen, just a blinking prompt… i can not enter the bios other selected devices e.g. usb drive etc. nothing work.
only after restoring defaults with a cmos clear. other options (storage config {ide/ahci}) work and boot.

Since the Intel RAID drivers and RAID ROM modules from v9.5 up belong to the much newer "Rapid Storage Technology" (= RST), the Intel RAID Utility (available via CRTL+I while booting) should not show the "Matrix Storage Manager" (= MSM) GUI.
Questions:
1. Are you sure, that you have set the Intel (and not the Marvell) SATA Controller to "RAID" within the BIOS?
2. Why did you flash a modded BIOS, which contains an updated Marvell RAID ROM, which is neither needed nor used?

Some thoughts fell out onto the page as I passed by, use v10.1.0.1008 TRIM mod + do not update Marvell controller (especially if you are not planning to boot from this controller)