As stated, I’d like to have the option to enable “Above 4G decoding” and if possible, have the [Experimental] Resizable BAR DXE driver driver properly added to my motherboard’s BIOS.

There seem to be some doubts around the effectiveness of enabling Resizable Bar on intel’s 3rd Gen Ivy Bridge platform, and I believe I have enough benchmark prowess to provide you with the proper numbers, but, you all gotta help me out here with getting Rebar working first.

Also, there is this option in my BIOS that says this: 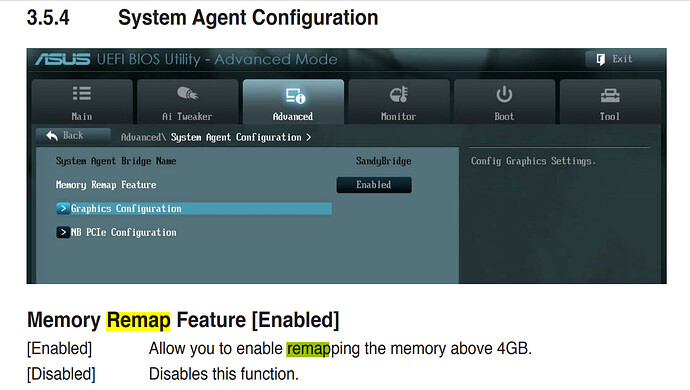 I believe this has to do with allowing the OS access to more memory and not necessarily tied with Above 4G Decoding, but thought it was worthwhile to point this out, in case anyone stumbles across this while editing the BIOS. I am open to corrections as well.

Tagging some of the regulars and others who seem to have similar mods done: @Kuri0 @boombastik @bgelb0 @prazola

Use GitHub - LongSoft/Universal-IFR-Extractor: Utility that can extract the internal forms represenation from both EFI and UEFI modules. on the Setup module in BIOS extracted using UEFITool. Should show you the hidden BIOS settings this method worked to get 4G on my motherboard

I used “AMISetup_IFR_v0_1” to obtain this. Is this what you’re looking for? I do see two hits for “Above 4G Decoding” in the string dumps.

I also had a quick look with AMIBCP: 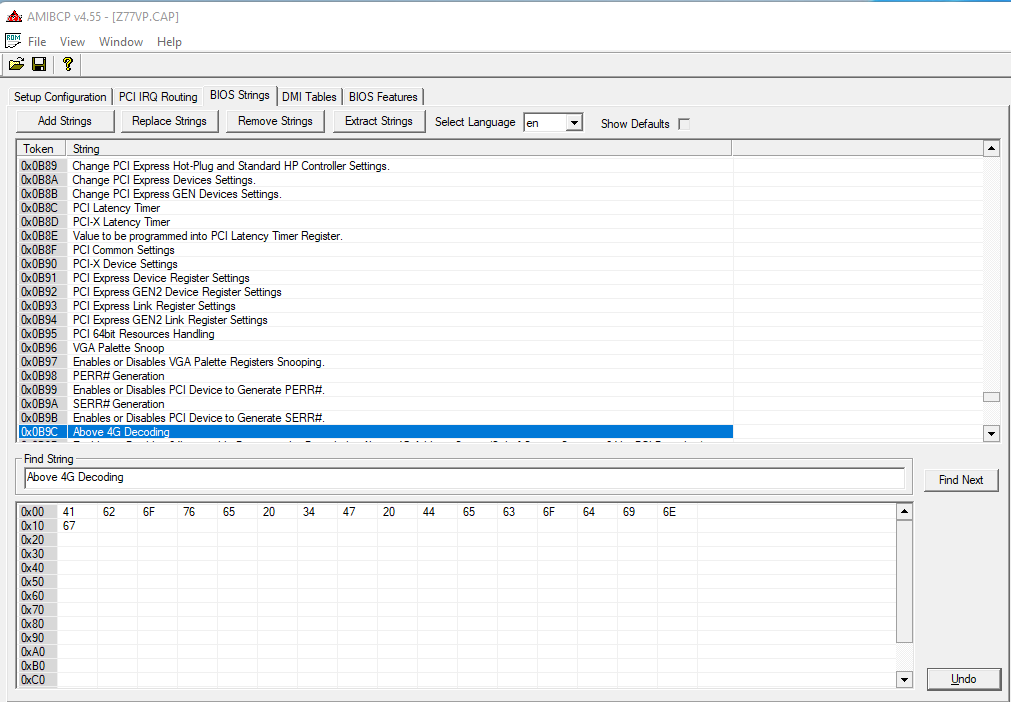 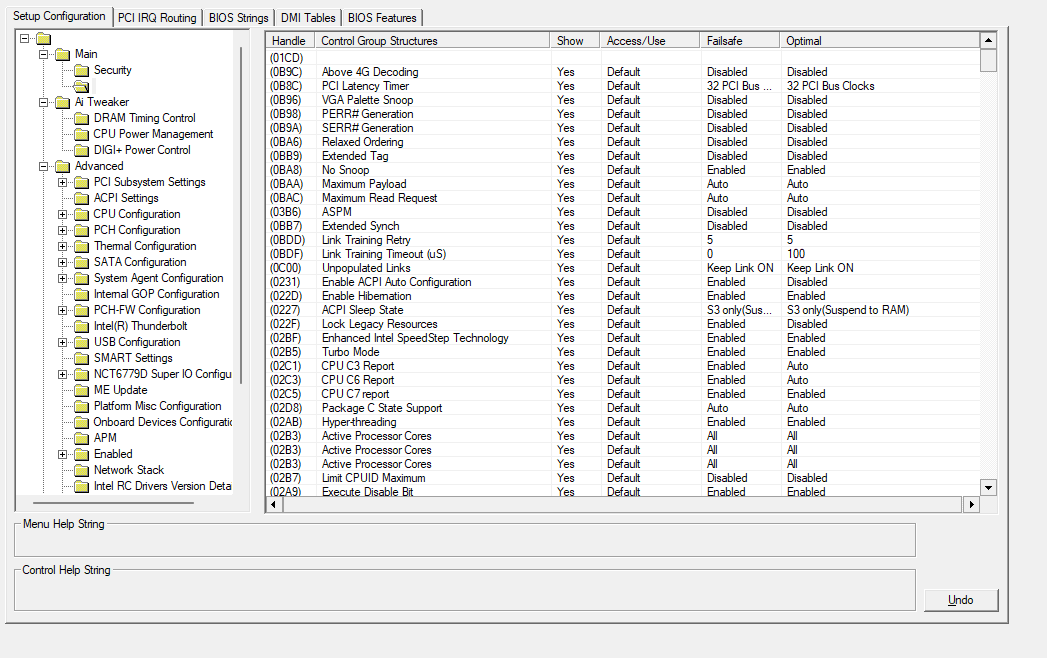 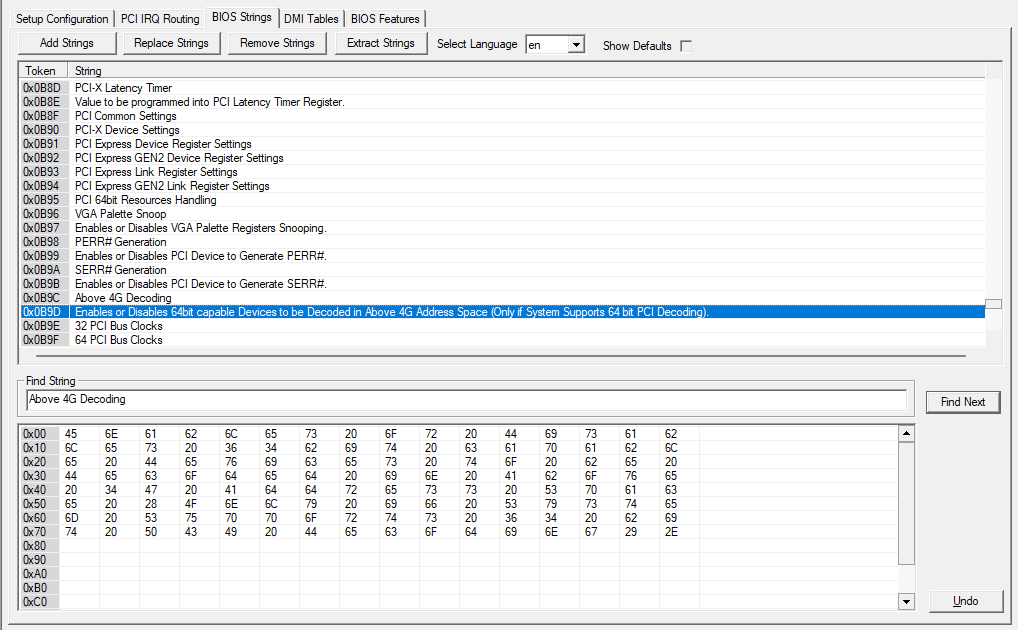 Looks like the BIOS has some hidden options in there, waiting for someone to avail them.

This motherboard is one of the last ones that AMIBCP tool still does the job, modifying the Access/Use tokens (ONLY, do not change Failsafe/Optimal or will break it), work it on the CAP for USB BFB flash or in dump bios region with Intel FPT for same method flash (May require Flash descriptor/Access to bios regions unlocked)

The parent of the desired available functions is the token to modify, not the string itself.
Ex.: “Thermal Configuration”, change it in Advanced, the hole sub menu will be visible. 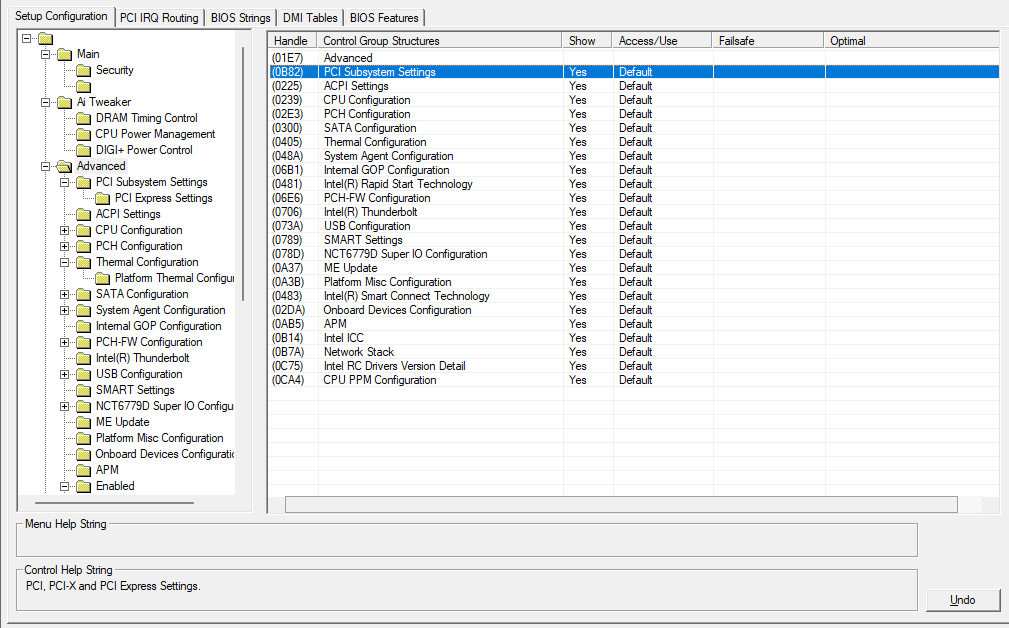 I said parent menu. It says yes but you cant see it in original bios settings.
And i said Access/Use token not Show… pay attention to what is written.

I was able to figure it out on my own, thanks anyway.

So the Above 4G Decoding option is now available. 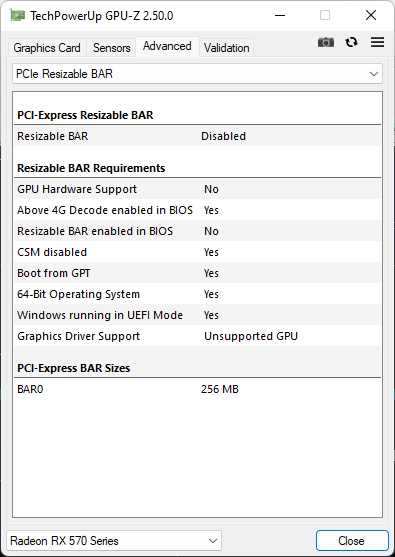 And for good measure, checked Device Manager, and Large Memory address is there too: 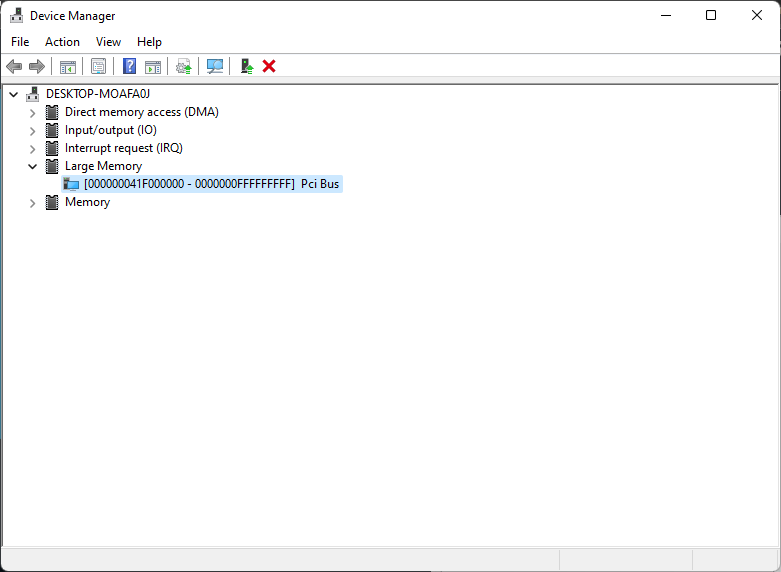 There’s still the hurdle of getting the Resizable BAR DXE to work, which I haven’t been able to do so. The original instructions were to insert the FFS before the PciHostBridge using UEFITool (non FE) but that mod bricks my BIOS in its entirety. Here’s hoping Kuri0 can help me out with this.

Once that’s done, all I need to do is use the modded AMD drivers that enables SAM on RX 570… and pick some titles that do benefit from REBAR, some on and off benches should clear up all doubts.

.rom file inside I just inserted the ReBarDxe with UEFITool like it has worked for multiple people here and someone on overclockers.ru tried it and had it work too apparently.

If it doesn’t boot even with ReBar disabled I guess it’s a problem specific to ASUS Z77 BIOS which I don’t know how to fix.

Also there’s a possibility of the BIOS not working with larger BAR sizes. My Gigabyte B75M-D3H BIOS only works upto 2GB BAR and prazola’s Asrock Z97 only works upto 8GB. Don’t know how to get around this limit.

I checked your bios and i want to confirm that you unlock correctly the above 4g option.
If you want anything else for me, tell me.

Unfortunately, this BIOS doesn’t boot/never POSTs. I have to use Flashback to do a recovery. Any ideas what the issue might be? I know you’ve already said you don’t know of a fix, but maybe we are overlooking something simple… perhaps a different location to insert the DXE driver? (likely a stupid idea as I don’t know what I am talking about)

We got so close, yet so far in the end…

Even if you cant make the ReBarDxe to work in your motherboard, i will give you the advice to leave above 4g enabled.

Could try using MMTool to insert the module 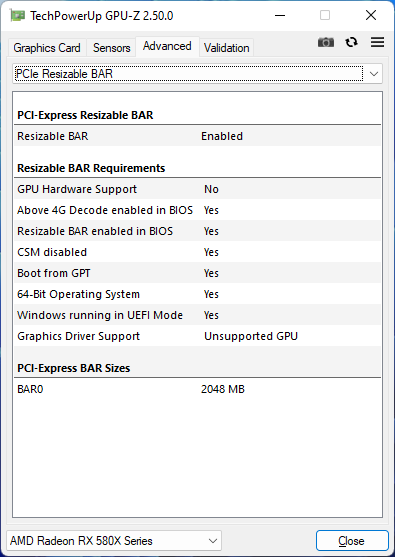 I followed Fernando 's tutorial and inserted the module at the very end of the table. And that did the trick! Now to get the modded driver working. 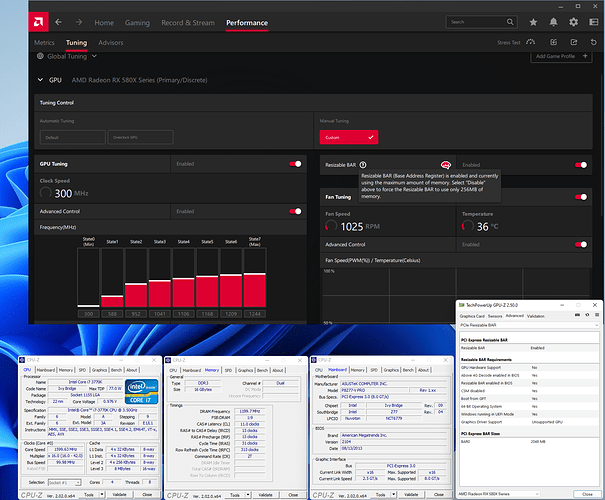 This is with REBAR ON: 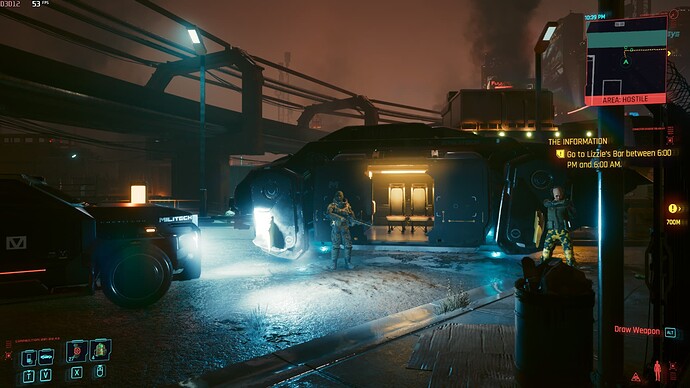 And this is with REBAR set to OFF: 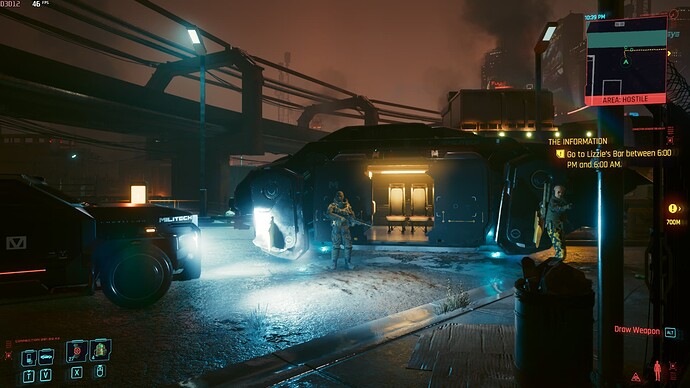 Preliminary testing shows that this is more than just some cosmetic, you do gain performance for sure.

I can’t thank @Kuri0 enough for this! Dude, you rock!!

The above screenshots were with the FSR 2.1 MOD, I tried native resolution without any sort of image upscaling, and yep, it does have a performance uplift there too.

Rebar is set to ON 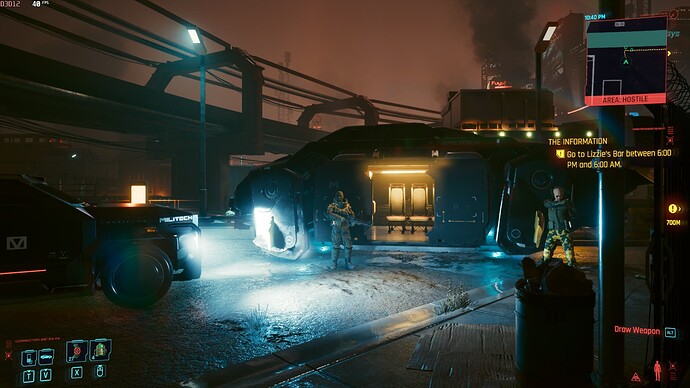 Rebar is set to OFF 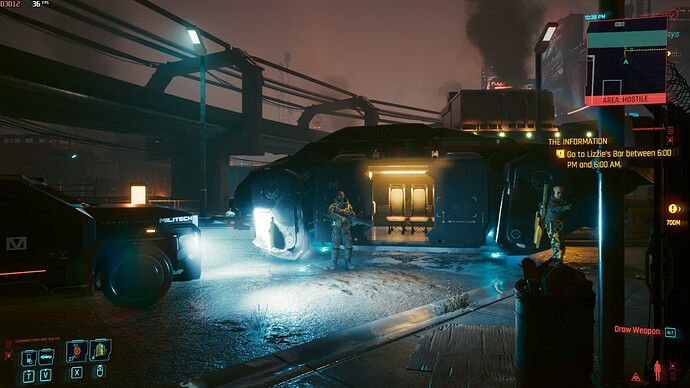 So, that’s quite the gain IMO.

I don’t use the integrated GPU, do you think I can use a higher value than 11 for ReBarState? Is there some kinda test I can perform to see which values may or may not work beforehand? Because having to Reflash BIOS every time I get the values wrong is a bit of a pain.

Please consider to upload here the bios for anyone that want to use it!

Here is the ROM. So, long story short, following principles is what got this mod working in the end. I read Fernando’s UEFITool Tutorial and his suggestion was to add the DXE stuff at the very end, which is what worked!

And thanks to you all, I also was able to unlock the ability to save OC profiles in my motherboard’s BIOS, something ASUS seems to have disabled, guess they saved it for the more expensive motherboard variants.

It’s too bad that my MSI Afterburner Overlay isn’t ready, I’d have loved to have made some before and after game capture comparisons.

I thank each and every one of you who participated in this thread, your opinions and input certainly helped!

Thats great my friend, now tell us something, you said you need a mod driver for this… “the modded AMD drivers that enables SAM on RX 570”
Can you post some more info on this? Is it mandatory on this mod?
It doesnt work with standard AMD drivers?

My faith on this mod has grown a liitle bit now… we need some NVidia users now.

These guys are doing great work, is all I can say. To take advantage of REBAR on unsupported graphics cards, you either use the modded driver package, or you can use a registry hack that you have to enable every time you start your PC.

I am going to write a detailed guide that is more n00b friendly in a couple of days.