I had an Problem, while order a new PC there was an Bug on order and so there is no activated AMT.
Now I tried from anotter PC (with activated AMT) dumping ME an flash this dump to new PC - nothing happens, AMT isn’t available. FPT -greset doesn’t help. Both PCs are on same BIOS Version (2.6.1)

I attached 2 ME Files, ME_PC06 is from an PC with working AMT, ME_PC_neu is from the not working AMT PC.

I enabled AMT at the me_pc_neu CSME region. Flash it with “fptw -rewrite -me -f me_pc_neu_fix.bin” followed by “fptw -greset”. After the reboot, you should be able to provision and use AMT.

thanks a lot, I test your fixed file tomorrow.

Please give me a hint, I don’t understand why it’s not possible to use a dump from the other PC. It’s same BIOS Version and same Board.
Was mistake I used fptw -me -f, instead of fptw -rewrite -me -f?

I enabled AMT at the me_pc_neu CSME region. Flash it with "fptw -rewrite -me -f me_pc_neu_fix.bin" followed by "fptw -greset". After the reboot, you should be able to provision and use AMT.

fix is working on one of two machines. that means, the machine wheres the original dump you fixed works fine. a secound machine doesn’t work. ist the fix machine specific?

Do not a system’s dump to flash others, it might cause issues. Read Section A of the CleanUp Guide to learn more. For any other systems with AMT disabled, just open the dump in Flash Image Tool, go to AMT tab and enable all relevant settings (around four if I remember properly, don’t forget TLS at the bottom).

I tried to flash them with fixed dump from other system.

What’s to do to fix this failure? It is enough to Flash them with a cleaned image?

The above warning concerned the Engine region only which can always be cleaned, provided that we have its settings (DATA Configured or Configured + Initialized). What is more important is the BIOS as it may contain system specific info such as Serial Numbers, MAC address etc (more relevant to laptops usually). If you flashed another system’s dump, I suggest you take the original dump of each system (to have its own BIOS) and then follow the CleanUp Guide. While following the guide, additionally enable AMT settings before building the final output. Otherwise, all you have to do is enable AMT settings and re-build the SPI image, no need to follow the CleanUp Guide if not needed.

a dump from original ME from wrong flashed System isn’t there, I flashed via fpt -me, so BIOS isn’t affected - right?
You Suggestion is, get an SPI dump from affected System (fpt -d spi.bin) and then follow your cleanup guide - right?

ME Dump and reflash with activated AMT is no solution?

If you didn’t touch the BIOS region, there is nothing to do there, ignore it. If you flashed the CSME region of another system then follow the CleanUp Guide, enable AMT if you want and flash it back via “fptw -me -f outimage.bin”. Make sure that the output/cleaned Engine region is 0xFF padded at its end to be the same size as the original. For future reference, if you have another such system, all you have to do is dump its SPI image (or CSME region, whatever you want) and enable AMT via FIT (no CleanUp Guide needed).

Is there an Setting in FIT for padding Engine Region?

I cleaned ME Region from another System to Flash my affected System - right?
I don’t remove Now my PDT Binary File Paht, because Filesize is 1.
I activate AMT bevore creating Image.

At the end my outpoutimage is smaller than dump.

hope everthing is right, don’t want to brick my board.

Subtract the new region size from the dumped one to get the difference and thus how much padding you need to append. Add the padding manually by using a hex editor. A hypothetical example with HxD Hex Editor: 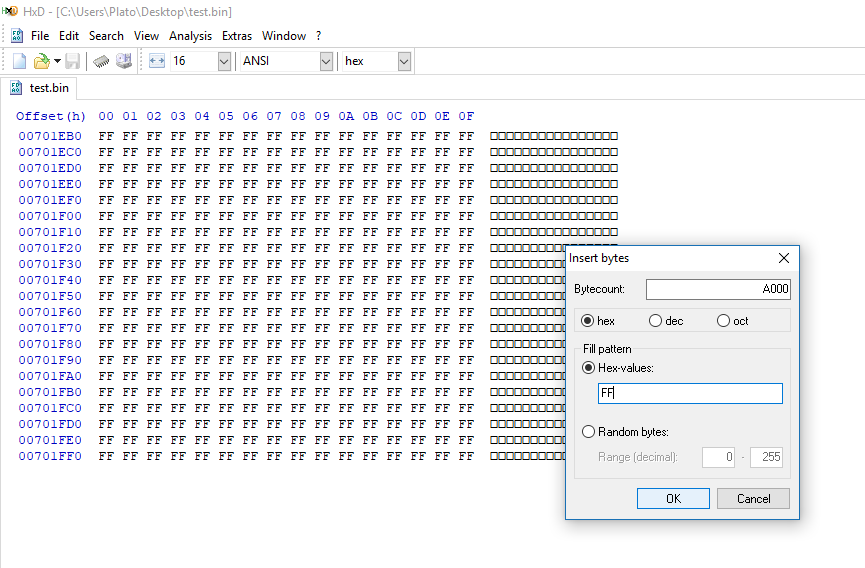 plutomaniac - thaks a lot, your guide is great.

today I test the cleaned ME Region - works fine!
ME works now for every system from this model, right?

I attached it for other people - at your own risk!

@plutomaniac , maybe you delete the systemspecific file, if you want maybe you can check my file.

ME works now for every system from this model, right?

Yes, the goal of the CleanUp Guide is precisely that.

@plutomaniac, maybe you delete the systemspecific file, if you want maybe you can check my file.

Yes I will. Compared to that CSME region (dump with AMT enabled), I can see one change:

Is it possible to see if cleaning was successful?

I don’t change deliberatly anything on WLAN, but there is no WLAN in this model. so in my oppinion it is not a problem

The last steps of the guide mention how to check that cleaning was successful. If the dump you actually cleaned (compared to what had been posted at the first post initially) has the same settings as the result, you’re good to go. Nothing to worry about.