Hi,
My laptop is an ASUS R500VD, is shutting down every 30 min exactly since fews days ago, and it won’t boot to BIOS (I tried both methods: by windows or keyboard at start).

I am now under Windows 10 (originally Windows 7).

I tried to follow this guide, to re-initialize the ME data, but I was unable to achieve it.

Guide-How To: Clean Dumped Intel Engine (CS)ME/(CS)TXE Regions with Data Initialization Last Updated: 2020-07-22 This guide is relevant to those who need to clean the DATA section of an Engine (CSME, ME, CSTXE, TXE) Region, which is part of a dumped SPI/BIOS image, in order to flash the latter on a different machine of the same OEM model. It is not meant as a guide on how to completely transform a dumped Engine region into a stock Intel-provided one. Although the guide can be used for that some…

I don’t know how to be able to flash the dumpted ME image because the command FPT -f give the error: “could not communicate with the HECI”. (I was able to dump it without error).

MEinfo gives me an error too. I send you the result of FPT -i command. 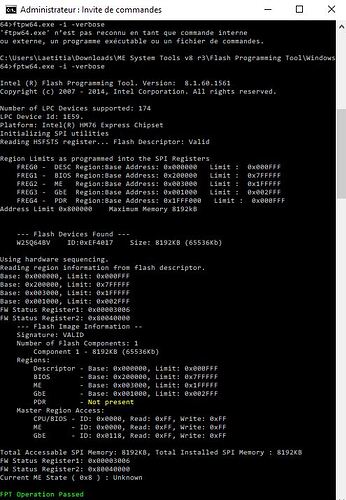 I don’t know if I have to update the BIOS first, or if there is an other way to fix this problem.

Thanks for the help!

Were you able to get a complete dump of your firmware? What did you use as a base for the cleaning process?

Yes, I think so.
I use this dumped image as a based for the cleaning process.
I send you what I obtained in the cmd board: 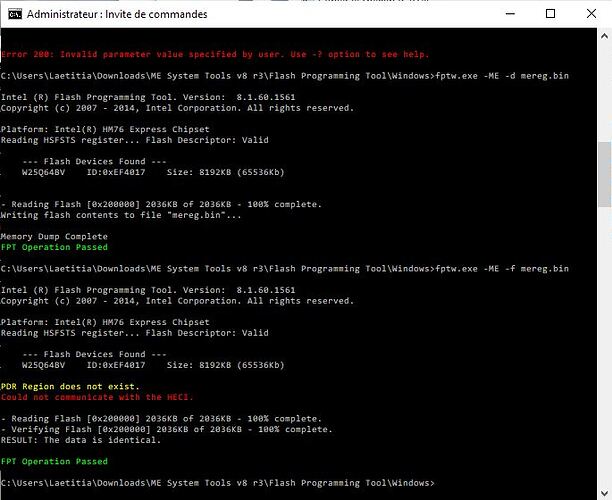 I’d recommend working on a full spi dump (fpt(w(64)) -d spi.bin instead of working with a region for the cleaning process. Anyway I recommend to dump the complete bios to have a backup- Asus bios update does only contain the bios region.

Your flash descriptor seems to be unlocked, so that shouldn’t be a problem. Create a DOS USB stick and try the dos version of fpt, it’s independent of the Windows driver installation.

Hi,
Thanks for the answer.
I’am now working with a full spi dump (it includes GbE Region, is it normal?)

I tried to run the dos version o f FPT, but I got the same, when I try to flash the spi image:

PDR Region does not exist
Could not communicate with the HECI

Might be possible to use the standard flashing tools, they might have a switch to overwrite ME, but it’s unpredictable hoe they will work.

Regions of the firmware you’ve seen in one of the pictures: FD, GbE, ME, Bios

Thank you very much for your help.

My problem was solved, although I didn’t understand exactly how.

After trying to run FPT under DOS, my computer worked normally again, and in fact, the FPT -f command under windows did not return the same error as before.

I don’t really understand what happened because it happened before I could flash the reinicialized BIOS image (and I didn’t do it, since everything was back to normal).

The only change was to disable the fast startup of the computer, to be able to enter the BIOS, and even after re-enabling the option, the system is still stable and now works properly.

Maybe it was a ME driver startup failure because when I had this problem, I didn’t see “Intel Management Engine Interface” in the device manager, nor in the HWinFO64 program.

Anyway, I’m glad that my computer is back to normal.