but have no idea how to use it, Github doesnt provide any tutorial , technically it is clear but practically it is not! Checksum error may cause all further problems with your modded bios image!

I got stucked om my BIOS image with checksum = 0x0 and have no idea where how I can find it! 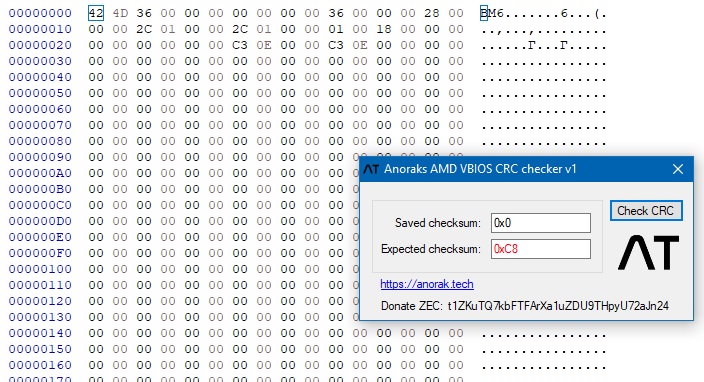 the AMD-VBIOS-CRC-checker is to use for an AMD V(ideo)BIOS (graphics card bios).
It should not work with a PC (motherboard) BIOS.

the AMD-VBIOS-CRC-checker is to use for an AMD V(ideo)BIOS (graphics card bios).
It should not work with a PC (motherboard) BIOS.

what is the difference?? any more “experts” ???

If you don’t know the difference between motherboard and graphics card, why do you wanna know something about checksums?
What do you wanna do? Or are you just trolling us?

i didnt expect a narrow minded person would answer me

Post BIOS you need to correct checksum in, and a link to a stock BIOS of the same version, and I will check and see if I can find the location for you and I’ll let you know where it is and how to correct

@Lost_N_BIOS I ve read many posts where authors just announce their checksum values and its offset locations but doesnt explain how do they find it.

My problem started when I realised that EZE H2O doesnt moddify setup menu of *.FD images, in order to do that i must convert *.FD image into *.bin file by cutting off "exessive" code ("capsule").

After doing that i get a file with wrong checksum… but when I return to wrap *.bin back into *.FD "capsule" the checksum error dissapears…

@Lost_N_BIOS here is my modified BIN file with wrong checksum, if i will use it on programmer im afraid it may cause a error

@klaxklax3 - as mentioned, I would tell you how/where etc. I wouldn’t leave you hanging like that, especially since you asked to know how, so you could learn etc

What you mentioned, is better done a few different ways, or maybe I’m just not used to how you explained it

Best way, extract the BIOS from the capsule, via UEFITool or hex, then replace once done. Similar to what you mentioned, but easier/cleaner doing this way.
The “Checksum” you mention may be a “Security” type checksum, which you can’t edit/change/fix etc. If the mod BIOS refuses to flash due to security issues, this is why, and you’ll need to flash it another way (via programmer, via FPT (Dump first, edit, reflash), or by modifying the stock flashing tools to bypass the security check)

What tells you “Wrong/bad Checksum”? If it’s Intel Insyde flash tool, this is normal with mod BIOS, you’ll have to dump and mod then reflash via FPT or programmer, or edit the iscflash.dll to bypass the exact error you are getting.
This is done in assembly, I need to see the exact error given to you before I can show you how to edit this file. You can show me an image of the error, screenshot or camera, or I really only need the exact text and then I can show you where to edit and how, to allow the Stock flash tool to flash mod BIOS.
This is not relevant to using a programmer, none of this is needed then, and you do not put BIOS back into that FD to use with programmer either, and ideally you don’t edit stock BIOS to program back in either, dump then edit, then program back.

What model/system BIOS is this, so I can save that stock BIOS into a properly named folder on my end, I keep copies of all stock BIOS I download so I don’t have to re-download later if someone asks for mod BIOS.

* Pre-post edit in
I checked the stock BIOS FD, this is not an encapsulated BIOS in the normal sense of capsule/CAP/Encapsulated, however there is several images in the original BIOS.FD (Driver, EC, BIOS, Platform.ini) - so some of what I mentioned above doesn’t apply directly in this case (ie extract from capsule etc)
BIOS Starts at 0xCC0 and ends at 00800CBF (Cut this, it’s 800000h) This looks like what you were doing originally, or at least similar outcome, this is the only part that is actual BIOS code

Since you mentioned programmer we can stop there!

If you are using programmer, it’s best to dump the original BIOS, if you want to update to different version do that first, then edit your dumped BIOS.
This way you keep your original NVRAM/VSS and system specific details (Serial, UUID, LAN MAC, Windows activations etc) And you don’t have to cut the BIOS up to edit it, as well as you don’t have to edit in any of these kind of details manually, nor do you have to worry about “Flashing Issues” with modified BIOS.

I checked your mod itself, just a quick glance, and I would not flash or program that, it’s a broken BIOS mod, an entire volume of the BIOS is broken and does not parse properly and this is the main DXE/BIOS volume itself too. Bolded that for anyone scrolling by later, so they don’t grab and flash

Here, compare to stock BIOS on left, your mod is on right, this is same main BIOS volume and should expand properly as you see on left (and that scrolls way down after expanding)

I do not see any checksum issues with your BIOS mod itself, only you may run into stock Insyde flashing tool problems with mod BIOS, this is normal and expected and only way to get around that is to edit the stock flashing tools themselves as mentioned to bypass the check at the assembly level for that specific error.
Or, those may have been shown to you anyway due to broken BIOS volume, luckily the stock tools stop any flash of mod BIOS anyway usually, unless you edit them first too.

Since you have programmer, you should have already taken a backup and verified it was actual BIOS code no 00’s or FF’s etc, compared to stock BIOS in BIOS tools and made sure it’s similar layout etc. Correct?
If yes, then don’t worry so much about testing your mod BIOS files with programmer, once you are sure you have a good backup and know your programmer works with whatever software version for your BIOS chip etc, then you can always and easily recover from any bad test program/flash within a few minutes
If you’ve not done this, do it now, for many reasons! Mainly so you can recover when things don’t work properly, but also because it’s best you mod that file and then program back anyway.

Now, lets discuss your mod, what did you do and with what tool? If only a single edit, or multiple edits wit a single tool, then you know right away what’s breaking the BIOS, if not you’ll need to do the edits one by one and check after each edit to see if it’s still OK or not.
Redo the mod, try another software version etc, until you don’t have this issue. But as I’ve mentioned, start with your current BIOS backed up via programmer, use that as your base BIOS file.

i used this app to modify my bios (i would say it is analog of AMIBCP for Insyde), it might be partly broken, check the link

@Lost_N_BIOS I ll try to rethink all the info i got from you, meanwhile (just in case)… do you have any guidance on how to edit iscflash.dll ???

Sorry if I misunderstood you, but your startup post did not contain any information regarding hardware or preliminary work. Your question “what is the difference??” was not specified further. So I started from the absolute base.

Your (politically incorrect) term “ni**a” let me guess a so-called “troll”. That’s why I asked you directly.
So-called trolls usually answer with insults or other “trivial” questions in order to continue attracting attention.

i didnt expect so narrow minded person would answer me

What I now could read, that you have a special interest. Why didn’t you wrote that just in your posts before?

@klaxklax3 - You’re welcome! And thanks for the tool used info, I have a copy already, I will do some testing with that version and some others and see if I can find the reason it’s breaking the main BIOS volume.
What exact modifications did you do with H20ZE? Edit setting defaults, insert modules, remove modules, update microcodes, replace some option rom etc, please tell me all so I can test each step and try to find the cause.
Once I find, I can show you other way to make same edits instead, so BIOS wont get broken. I already tested one simple setting change (Numlock default off to On) and this breaks BIOS. But, I’ll wait until I know what all changes you need made, then I can tell you safe way to make them.
This may not happen if you do it on BIOS dump instead, sometimes that edits a lot easier than stock, only way to know is test and see.

Yes about iscflash.dll, I am waiting on your reply on the other thread, then I can show you where the edit is you need to make. This is not safe for you to do right now though, since the BIOS you want to flash will brick the board.

sorry for the delay, i was disconnected from the internet today for some reason… using internet in my country become more and more unpredictable…

Glad to hear that! I am happy to help.

Nothing special. I unlocked some settings / enabled some defaults, thats it!

i have also older version of H2O EZE but its package doesnt fit site’s requirments… it exceeds 6 MB limit. 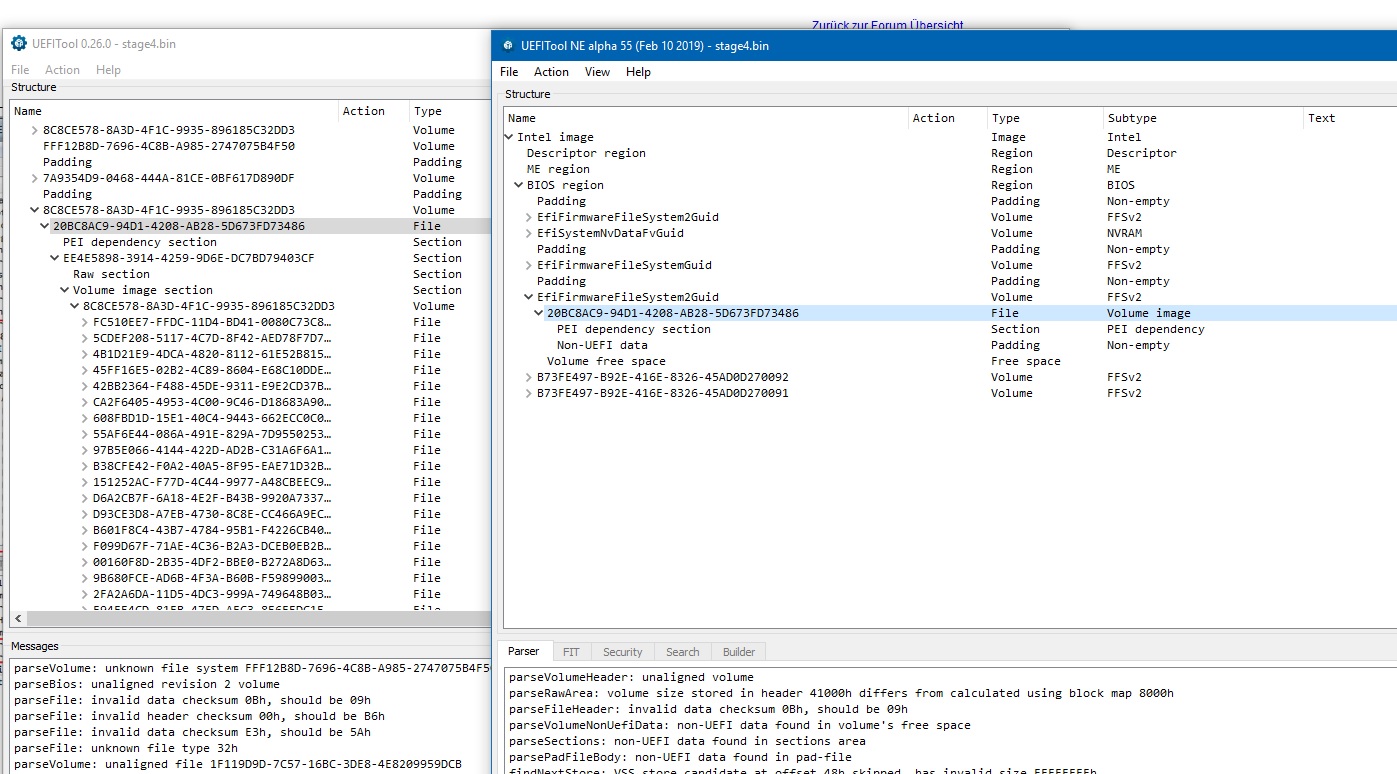 @klaxklax3 - yes, I have all the older versions too, they don’t properly allow certain edits, and the final public version you first mentioned here allows you to edit the default settings, but a single change there is what breaks the BIOS volume (did you see I mentioned editing NumLock default = broken BIOS)
So, if you are only changing BIOS setting defaults, then this should be done via hex/IFR by extracting and editing the setup file.

I compared using UEFITool alpha, but yes, not latest version, only 51. However, stock BIOS and your edited one do not open same, which it should, so this is broken in my eyes and not safe to flash.
It should match after you edit, to look same as before the edit in that same program. No matter what tool you are using, what version etc, before/after mod should parse the same way (In that same version tool, you can’t compare before/after in different tools, unless you compare both again in the other tool too)
Just because some other version can parse the post-edit file does not mean it’s safe to use, H20EZE can open it post-edit too, but that means nothing. I’ve seen similar with EZE breaking CRC32 checksum, and it still opened in EZE but bricked boards if used (General example of similar issue).
It may be OK, but I would not trust it, especially since you don’t have a proper backup made in advance (Do this NOW!!! Especially since you keep trying to talk yourself into flashing this file)

If you do the edits how I mentioned, this will not happen, and edited file will parse exactly the same in UEFITool as the original. But, as mentioned many times now, all/any of this is best done on a dump of your current BIOS first, either programmer or FPT
I highly suggest you dump the BIOS region via FPT, if you don’t want to open it up to get a programmer dump, then at least you will have a proper BIOS region backup and good source file to modify (Don’t use stock BIOS to mod, unless you are flashing in via stock tools)