I’m actually on Samsung 850 Pro in Raid 0, and I’m thinking of switching to a Samsung 950 Pro M2; is it possible to ghost the OS from one to the other using Acronis or similar?
I remember that this can be done from raid to raid and not raid to single, but I’m referring to SATA…
Thanks!

I have just come from that exact scenario and ended up deciding to clean install.

Although it is possible - it is a bad idea, you would have to mess with the registry (swapping from RAID mode to AHCI) and then uninstall the storage controllers in device manager before you cloned the RAID array.

If you just set the RAID controller back to AHCI without changing the registry setting and attempt to boot form the cloned drive you will get a BSOD with the error "“Inaccessible_Boot_Device” due to the installation being in RAID mode.

If you attempt to boot with the RAID controller in RAID mode it will likely also BSOD due to not loading the (Windows default) NVMe driver on boot.

You would be better off clean installing in AHCI mode and using the Samsung NVMe driver.

I agree with chinobino, that a clean install of the OS is the best and safest option, if you want to change your system drive from an Intel SATA RAID array to an M.2/PCIe connected NVMe SSD like the Samsung 950 Pro.
According to my knowledge the SATA mode of the Intel SATA Controller (AHCI or RAID) doesn’t matter. After having switched the SATA mode of my on-board Intel SATA Controller from AHCI to RAID mode (and vice versa) my Z97 system booted into the Samsung 950 Pro, where the OS is installed, without any problem.

Thanks everybody: for sure clean install is always the best solution, but actually I have no time for it…
As Fernando said, if Intel SATA controller is not involved in M2 SSDs (as they should have pipelanes directly to CPU, right?) I can try cloning the OS and let Windows fix the boot issue…
Thanks!

You could give it a shot and see what happens, no big loss except for the time to clone.

Try it in AHCI mode and if that fails switch it over to RAID.

I know Fernando said he can swap over without issue on his Z97, when I tried to switch from AHCI to RAID I get BSOD on my Z170 (and yes the 950 Pro has my boot partition on it).

I guess the result is motherboard/UEFI dependent.

@gpvecci:
Since each mainboard model may have its own internal PCIe lane distribution, only users with a similar mainboard model may be able to answer your questions. I suspect, that you will have to try it yourself (as me, when I am going to setup tonight a RAID0 array consisting of a Samsung 950 Pro and a Samsung SM951 Nvme).

Thanks! Please, let me know if that’s worth the price… 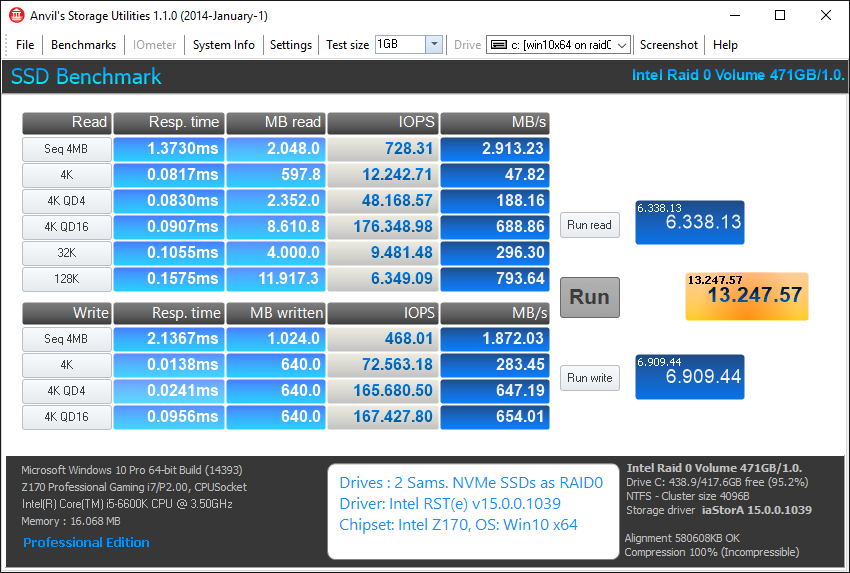 [quote="gpvecchi, post:8, topic:31512"] Please, let me know if that's worth the price... [/quote] It depends on your computing preferences and on your budget.
I doubt, hat you will realize the performance boost while doing Office tasks or surfing in the Internet.
gpvecchi August 3, 2016, 10:44am #10

Not bad, it looks that writing had a nice boost.

it looks that writing had a nice boost.

Yes, this is the biggest advance of an Intel RAID array: You can enable the famous WRITE-BACK CACHING feature via the Intel RST Console.

I read around that as the raid setup between Samsung M2 devices uses Intel drivers and not the Samsung optimized ones (that still don’t support it) the access time is really increased, making the every day performances slower than single card setup. Do you agree?

Yes, my NVMe SSD RAID0 array is not managed by the Samsung NVMe Controller, but by the Intel SATA RAID Controller DEV_2822, which uses the Intel RST(e) driver v15.0.0.1039 named iaStorA.sys.

the access time is really increased, making the every day performances slower than single card setup. Do you agree?

By the way: >Here< I have posted a more detailed report about my recent test results.