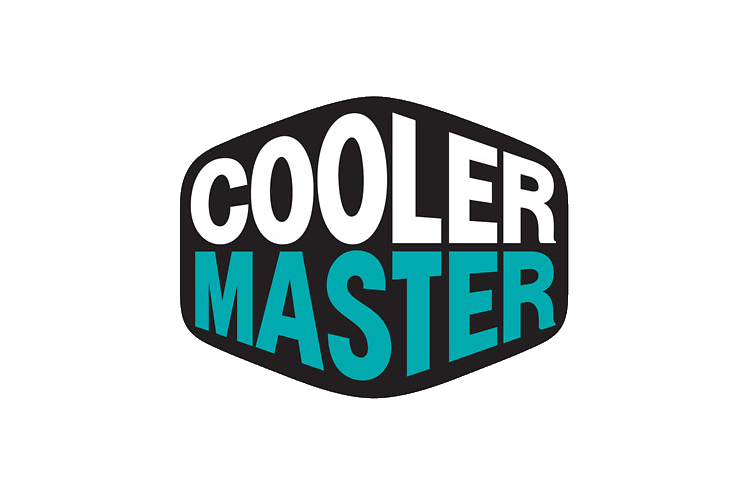 Welcome onlookers and passersby! Here today we have the Cooler Master MasterLiquid 240 for us all to take a look-see at. Cooler Master should not need an introduction by now they have been around for a long time providing some really quite good products for people including fans, PC cases, power supplies, and as we are looking at today, All-In-One coolers among other things as well. I think that'll about do it for an introduction, does anyone read introductions anyway? No? I can't say that surprises me.

Let's have a peek at what this MasterLiquid 240 is flaunting. I'm expecting good things Cooler Master.

So there's the specification, not too shabby but I will pick up on that the pump L10 life of 20,000 hours is equal to 2.28 years and the warranty period for this AIO is a flat 2 years. That is an uncomfortably short time in my book and I'm surprised they are using the same pump as the MasterLiquid 120 on their 240mm offering as well. Use better pumps CM or at least have a warranty period that covers the full life expectancy of the pump.

The other thing I'll pick up on is the fans they are decent for the most part but their air pressure is on the low side for ones to be used with a radiator.

It's good to see AM4 brackets once again being included in the package and the FEP tubing with very secure fitting both to the pump and radiator is most welcome, effectively eliminating the biggest concern with any AIO; leakage.

Now we take a trip to Florence, Italy, where these artful pictures have been put on display for your viewing pleasure. 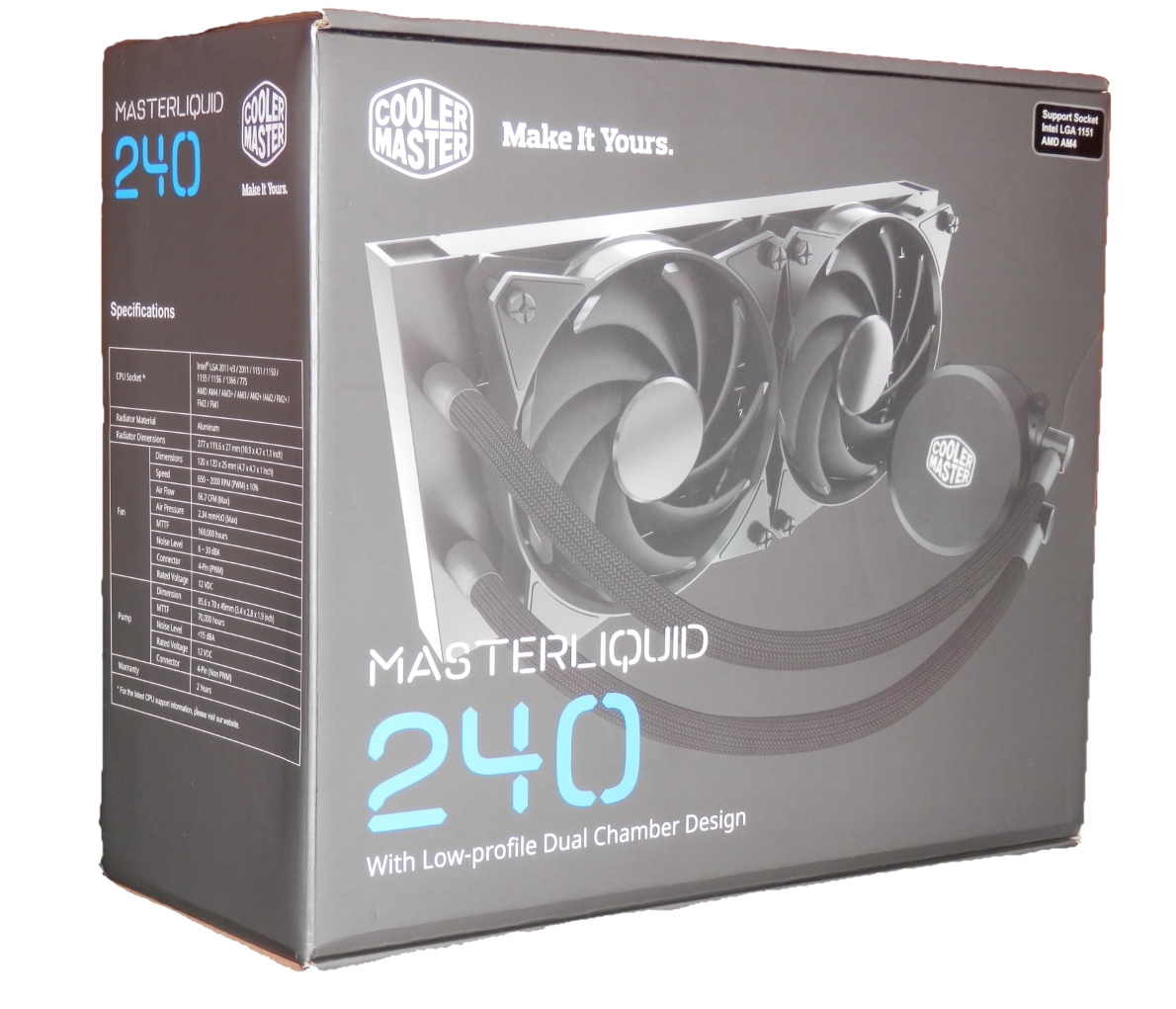 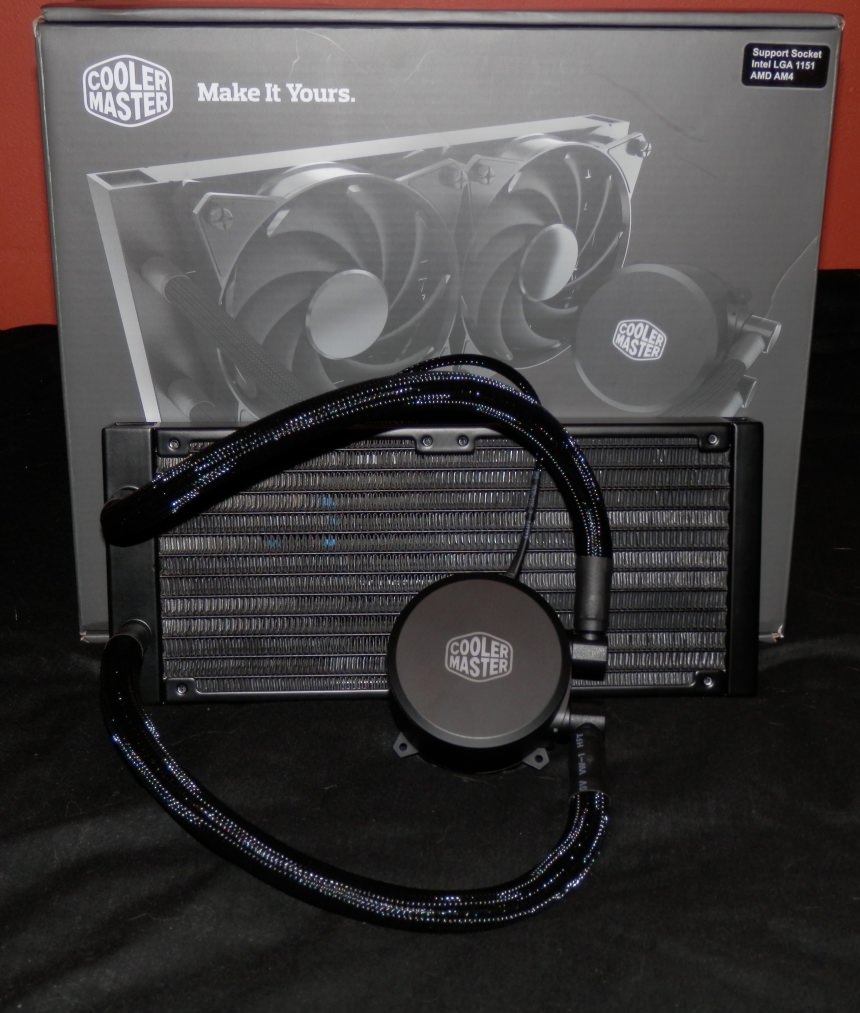 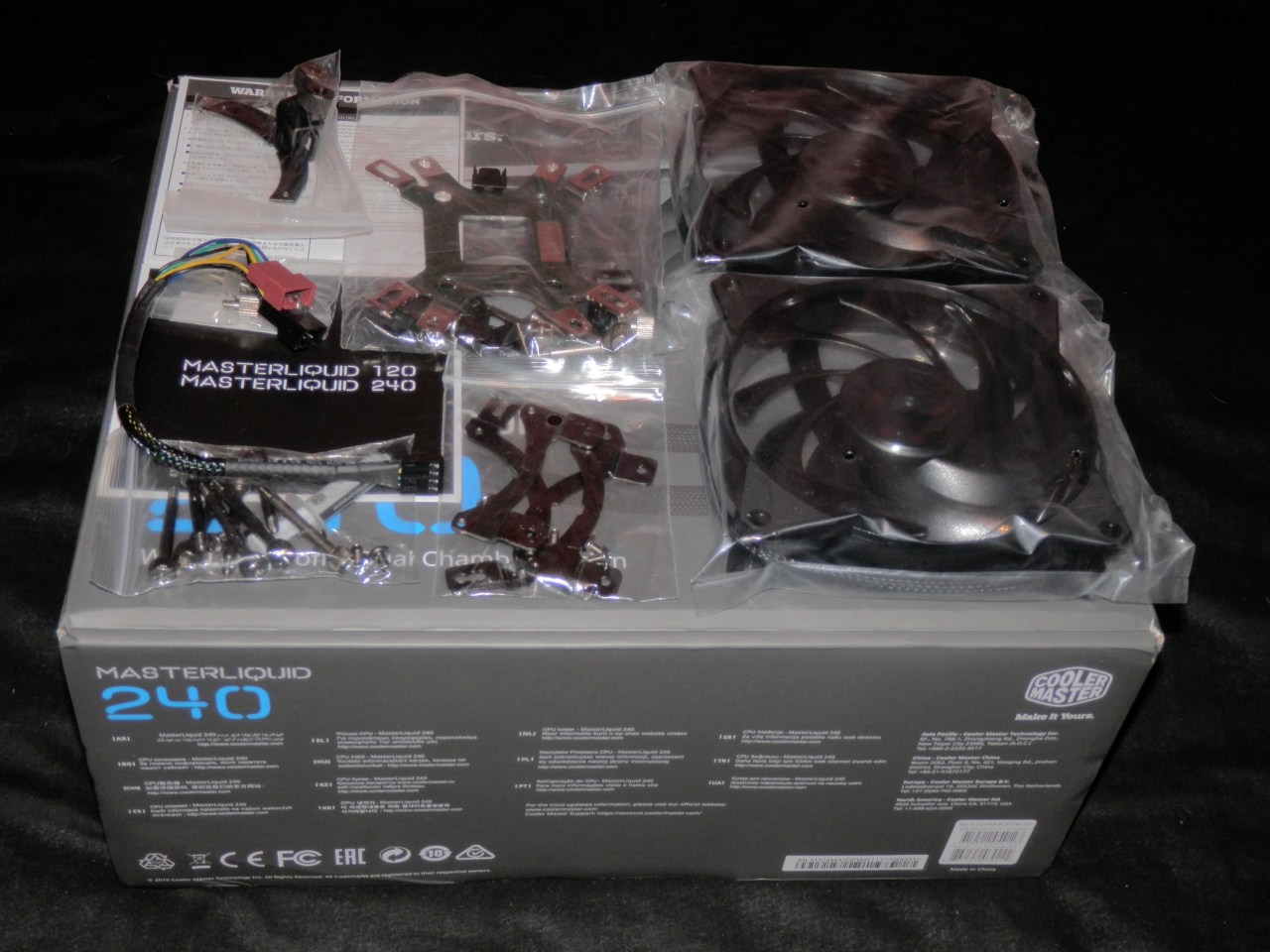 The pump and radiator look nice enough here and the included fans look very much like to be Cooler Masters "Air Balance" variety. Fairly promising so far so let's have a few close up looks. 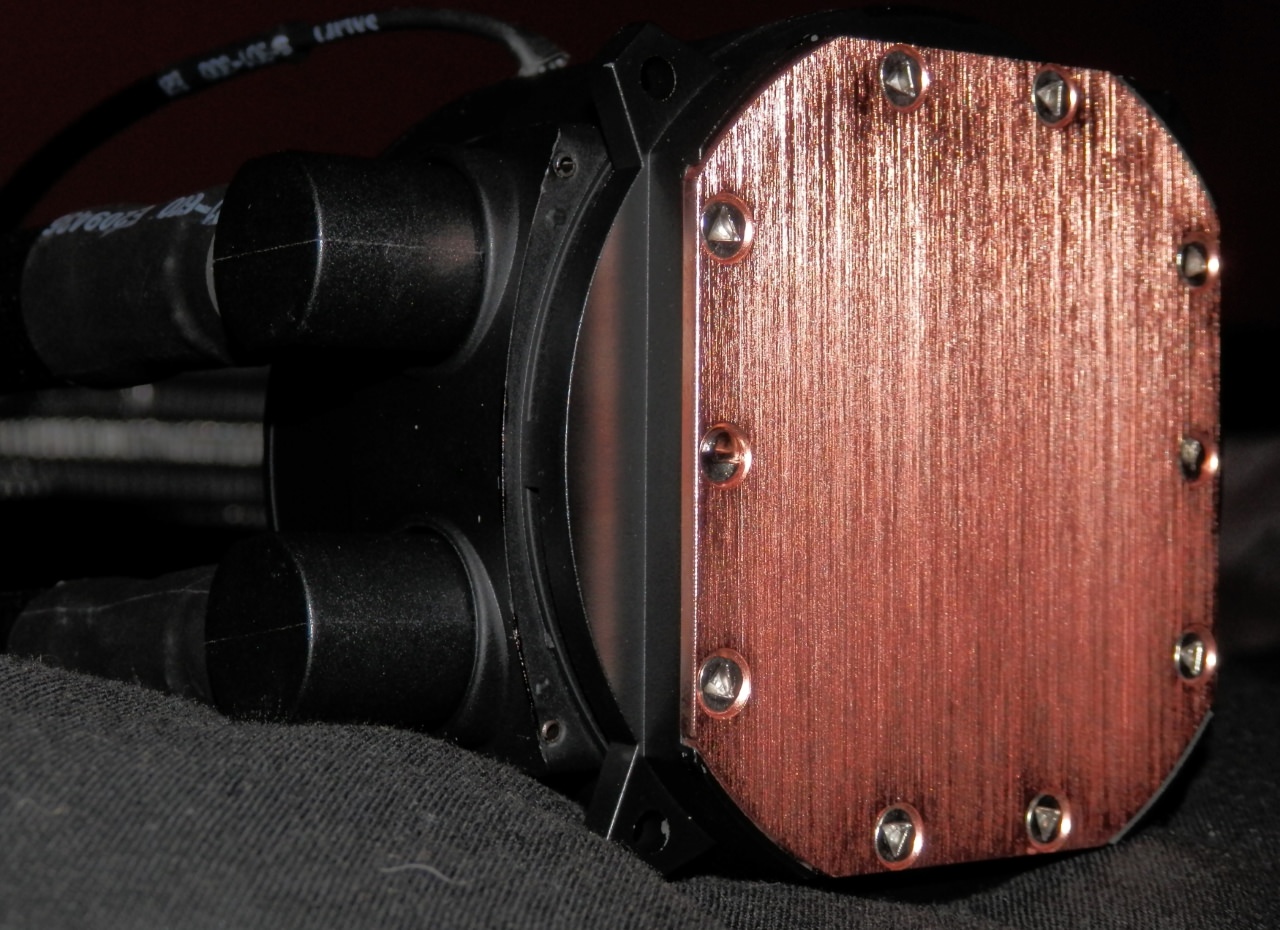 So, upon close inspection the ML240 has all the same flaws as what I didn't like about the MasterLiquid 120, dodgy AM4 bracket fitting and badly finished copper plate being the worst of the offenders.

CM, may I have a word for a moment with you? Why aren't screws for the AM4 mounting brackets longer and come with some nuts to ensure a solid, reliable fitting? We are talking pennies in manufacturing costs here. I'd also like to know why you aren't using a better quality pump on a larger AIO unit like this.

Now we get to testing, we already know this MasterLiquid 240 is a MasterLiquid 120 by looking at the specs just with a bigger radiator so it'll be interesting to see how the ML240 performs compared to the ML120. 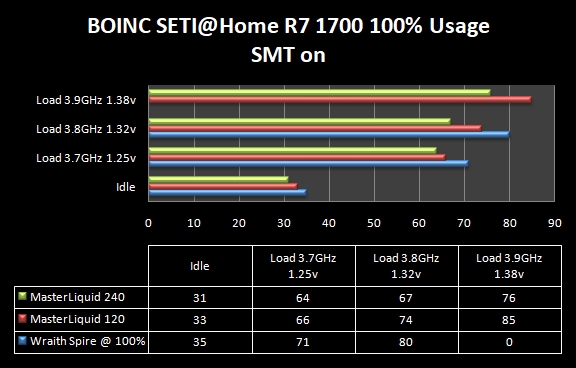 As you can see at idle there is really nothing to discuss, all coolers are performing very close to one another. The 3.7GHz test also shows all of the coolers performing relatively close to one another but once we hit 3.8GHz temperatures do start to show clear differences with the Spire trailing the ML240 by 13c. Clearly the Wraith is starting to feel its limitations at that speed and voltage, unsurprising given its rating of 95w but let us not forget the Wraith is something you get for free as such it is extremely good.

Things do start to get interesting at the 3.9GHz mark, now it should be noted that I do not have data for the Wraith at 3.9GHz as the results come from the ML120 review hence the "0" rather than an outright fail indicator, which when I do reviews like this will always be "-1" for a fail. Getting back to the ML240 and "Milly" at 3.9GHz we see the MasterLiquid 240 really own this level the difference between Milly and the ML240 is quite pronounced. It should be noted that Milly at time of her review was installed differently compared to the MasterLiquid 240 due to obvious size differences as such if Milly were to be installed in a similar fashion to the MasterLiquid 240 I would not be surprised to see better results from the 3.9GHz test for Milly. Unfortunately 3.9GHz is the maximum stable frequency for this 1700 with SMT on and I was not able to coax any further speed out of the CPU with the ML240 so that is where the testing will end today.

With SMT off however the 1700 happily pushed to the 4GHz marker completely stable as it has done in the past. I'd call those results pretty respectable for Zen, they amount to between a 26.8% and 30% overclock over the base frequency of 3GHz.

I'm sure this wasn't the essay length review most of you have come to expect from me but that is just the nature of reviews like this, there is just not as much to look at as something like a mainboard or GPU. From what there is to look at though we can conclude a great deal. Firstly, anyone who happens to look at both the MasterLiquid 120 and MasterLiquid 240 will have an awkward moment, the reason for this is that the MasterLiquid 120 retails for 55 pounds while the MasterLiquid 240 can be found for 65 pounds. That is uncomfortably close to one another and makes the ML240 the obvious choice to go for. Once again the sleeved FEP tubing is most welcome and really adds a great finishing touch to the unit. Bare hoses are reprehensible in my book on all but the most budget orientated AIOs.

The Cooler Master MasterLiquid 240 is a respectable 240mm AIO that with a little time put in to it can become a rather good AIO. The performance of it gives the unit a respectable lead over the ML120 but its understated looks, while nice, are too understated a couple Sickleflow LED fans that shift both more CFM and static air pressure would have been a welcome inclusion that would have not only performed better but given some much needed individuality to the AIO. The ML240 falls slightly short in out of the box build quality and aesthetics which are more important on AIOs than any other component considering AIOs are just essentially big black lumps. Even lovely curvy big black lumps like the ML240 need something to dress them up a bit currently the appearance just comes across as not really taking any pride in ones work. That is the feeling you are left with in terms of both build quality and aesthetics but ultimately the ML240 is a respectable AIO at a decent price.

You didn't disappoint with the MasterLiquid 240 Cooler Master, but a bit better was expected the life expectancy of the pump has hurt you here and your current catalogue of AIO coolers is becoming somewhat over saturated contradicting some of your own offerings.

I can overlook the bad finish on the pump block, the mediocre included fans, and even the rather poor AM4 bracket fitting on the pump housing as these are all things easily remedied with a bit of DIY. What I can't overlook though is the relatively short life expectancy of the pump and a warranty period that does not fully cover it. You got away with this with the ML120 CM where it slipped my net I am now going to include a new category in the final score criteria; warranty period. 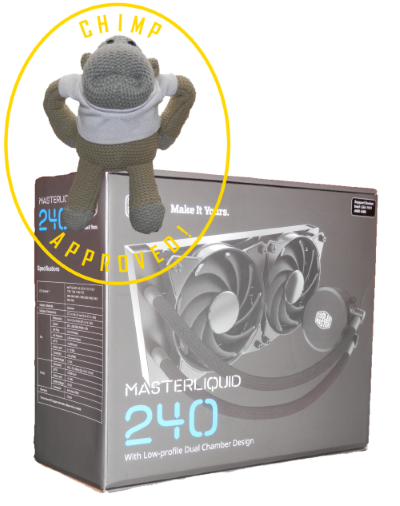 I invite manufacturers to contact me for their thoughts on any reviews I do there are multiple ways in which you can contact me including finding me on LinkedIn.