Benchmarking showed this later ME version, in which Intel addressed the Spectre/Meltdown issue has measurably lowered the processor performance for certain tasks - Cinebench20 for example shows a ~12% degrade while Cinebench15 shows no change.

I would like to fully roll back the BIOS but a simple BIOS update with an earlier bios version does not change the ME because the more recent ME version has a higher numbered Version Control so prevents earlier ME versions from installing. When I first attempted a BIOS downgrade the ME part of the update reported an error. The rest of the downgrade ran correctly and reports in the BIOS is now A12.

The Dell T7610 has a service jumper on the motherboard so I followed these instructions (3553f39-Guide-Unlock-Intel-Flash-Descriptor-Read-Write-Access-Permissions-for-SPI-Servicing). I have bridged this and confirmed using the Intel Flash Programming Tool that the Flash Descriptor is unlocked - it reported no errors and dumped out the data file (please see attached). With the service jumper in place I then attempted a second BIOS Downgrade. This ran without errors during the update (unlike the first time above) but when I check I see it still did not downgrade the Intel ME. 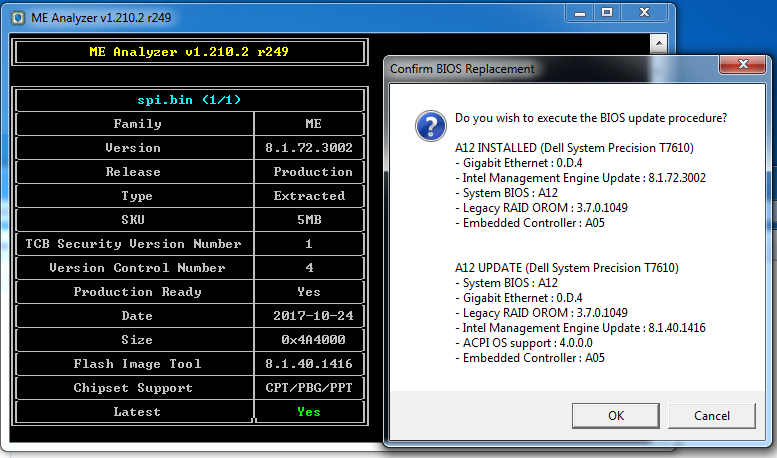 Thats about as far as I've managed to get. I would really like to downgrade the ME to 8.1.40.1416 to restore the full performance of these processors. With the service jumper in place I appear to have the Flash Descriptor unlocked so if I've understood correctly I would next require a recompiled ME to install which can overcome the Version Control Lock. I've downloaded Intel System tools and started trying to build a fresh ME file follwowing these instructions (t1658f39-Guide-Clean-Dumped-Intel-Engine-CS-ME-CS-TXE-Regions-with-Data-Initialization).

CPUz reports the machine has the X79 Southbridge - I think this means it needs the C600 and Patsburg X79 setting in the Intel Flash Image Tool. 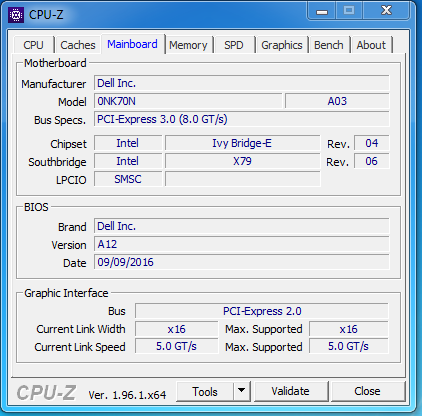 I've been working through the rest of the guide following the instructions but I'm probably getting a little too far out my depth from here and I'm risking bricking the machine if I mess up. Any help, instructions or advice from here wouild really be appreciated. Many thanks in advance.

Ignore all the above

I realise now what I need to do is roll back the microcode which was updated with the bios change.

Hi,can you plz show me how did you roll back the microcode??

Please assist if you have any further advice or steps on how to fix this.