I made a custom BIOS based on beta 3.25C for ASRock P67 Pro3 motherboard.
That’s the only one with working “Fast boot” instead “UEFI-compatible” mode.

The things I wanna talk about is:
- What’s the reason of having Intel Sandy/Ivy GOP modules or vBIOS on 6-series motherboard chipset? Are they safe to remove at all?
and also:
- I have some obsolete microcodes here (I mean dated 2009-2012) - Does removal everything except 2018’s 206A7/306A9 will affect CPU compatibility? 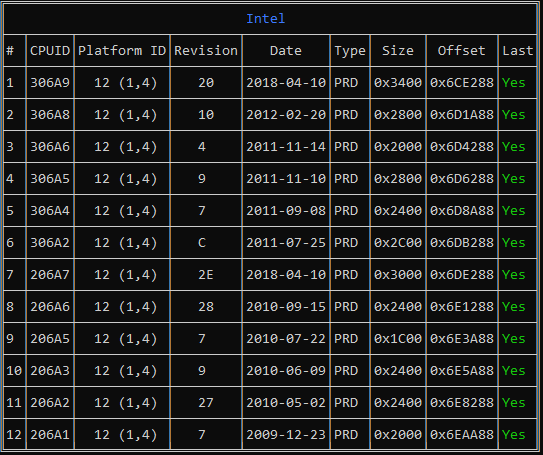 @Majaque - Sandy/Ivy bridge GOP/vBIOS are the only ones you can have/use on P67, their designed for P67-Z68-Z77. I would not remove those, you never know when you might need for testing or in case graphics card dies etc. You can disable integrated graphics in the BIOS.
On the microcodes, you can remove any your current CPU does not need, or think you may never use in the future, if you want. Just be sure you leave at least ones for current CPU’s you use.
Then in the future if you end up needing to use a CPU you removed microcode for then just reflash stock BIOS before putting in that CPU.

Every post here mention about it, but the problem is… P67 doesn’t support iGPU, according to my knowledge (but H67 has). I don’t even have video outputs. That’s why I’m asking about reasons.

, probably there due to getting ready for Z68 and or used as a base BIOS to but built upon for other boards like H67/H55/Bxx/Qxx etc
I would leave them in place, in case it breaks the BIOS removing or FF’n etc, unless you have programmer in hand and can recover from bricked board easily.

(…) in case it breaks the BIOS removing or FF’n etc, unless you have programmer in hand and can recover from bricked board easily.

I have Arduino Uno, breadboard and bunch of wires - is this enough?

BTW I have a feeling that ASRock messed things up: Can you check available BIOSes at official site and look inside them? Looks like 3.25C is superior to 3.30 or even latest 3.40 (from last year!)

Only you can know if that’s enough

I don’t know how to setup/use that, if you do and you know you have everything to make it work then probably yes, otherwise order the $2.50 programmer and $2.50 SOIC8 test clip cable if your BIOS is soldered to the board.
If you want to test it you can hook it up, make a backup and see if that backup is valid (looks similar to stock BIOS in UEFITool, opens properly in AMIBCP if stock one does etc). If it appears your method works, then you can erase chip, and test your mod BIOS.

What do you mean by “Superior”

I can plug this chip out of the socket, so I don’t need a test clip at all.
“Superior” by having more and updated EFI modules.

@Majaque - Yes, no clip needed then! Newer is not always better, and version names increasing or decrasing do not always mean newer or older, so hard to know for sure without asking them directly or investigating the version changes for each specific module you mean in places like this forum.

@Lost_N_BIOS - So what’s the most safe way to replace/remove microcodes and modules? What exactly am I risking by doing it?

@Majaque - Microcode updates can be done many ways, depending on what you prefer using, what your comfortable using etc, and sometimes maybe limited choices depending on BIOS. Microcode update on this board can be done via UEFITool/hex, MMTool, direct hex, UBU, and maybe other ways I’m not thinking of right now too.
No risk, other than if you mess it up then board will run on no microcode until you fix, or if you mess it up badly could brick the board depending on how bad it’s messed up.

@the4anoni - 3.40 is just 3.30 with updated microcodes, nothing more.
3.25C has:
Ultra Fast Boot - meaning full UEFI support for modern GPUs;
EFI modules for IRST and Realtek (also iGPU GOP drivers for Sandy/Ivy, but I don’t really know reason including it in that motherboard).