Hey guys, just to let you know I just installed one of these bad boys today in my new GA-Z97X-Gaming G1 WIFI-BK (F7 BIOS also UBU 1.30.1 modified), here are the speeds -
It is very fast and it boots fine, I currently have 64GB Boot partition, then 365Gb Game Partition and have kept 47Gb free for over provisioning etc.
Got my older Samsung XP951 setup for rest of my data.
Both using Lycom DT-120’s

Beautiful! I am upgrading my mobo to GA-Z170 Gaming7 and installing 2 of these in Raid0. Where did you source them? How many sata slots do you lose?

Beautiful! I am upgrading my mobo to GA-Z170 Gaming7 and installing 2 of these in Raid0. Where did you source them? How many sata slots do you lose?

No SATA slots lost although I don’t use SATA any more, so disabled them anyway, the board I have uses PLX chip.

This device worked fine, perfectly (and very quickly) 2 days only and afterthat I got a ‘no longer detection’ problem and it was impossible to do a NTFS format: 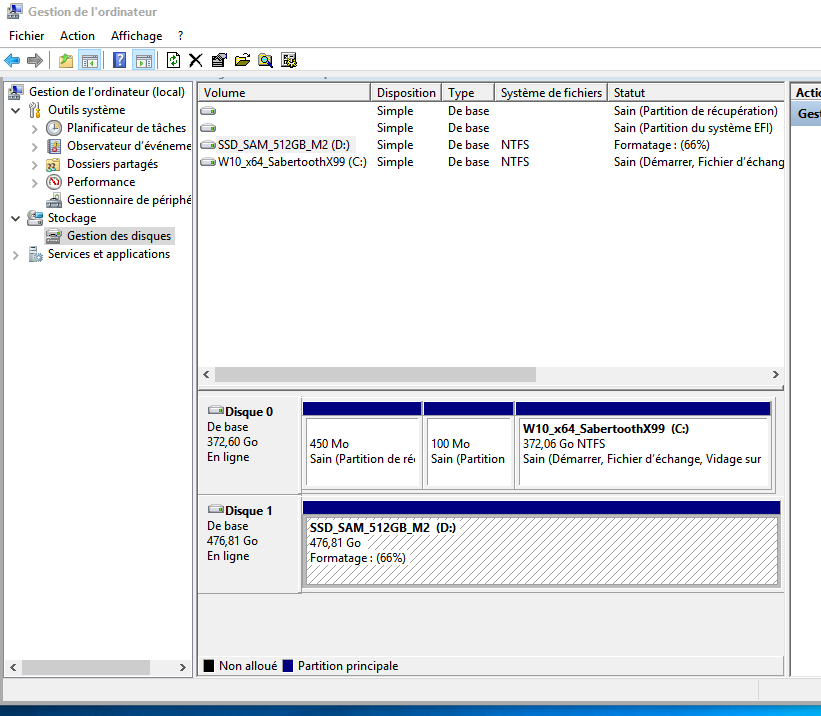 I have done some investigation and found via MAGICIAN 4.6 the abnormal SMART values: 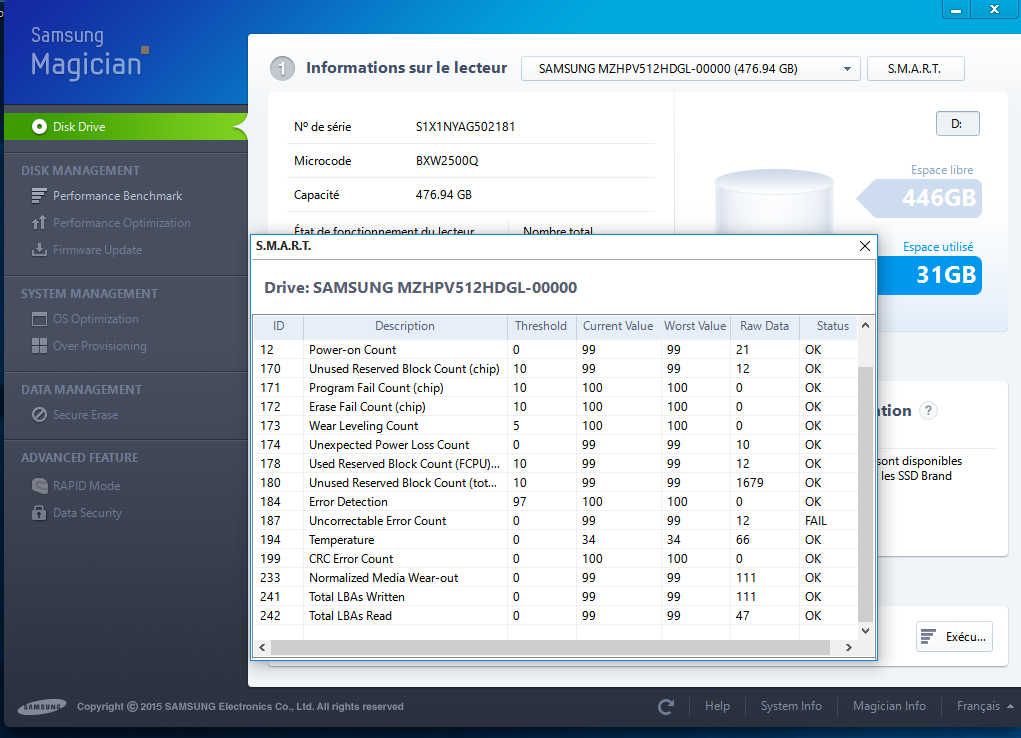 I have returned back the unit to the supplier and got my money back.

I have a strong doubt on the reliability of this too ‘new’ technology.
What do you think about ?

@ 100PIER:
You can be happy, that you have realized the issue within the first days after having purchased the Samsung SM951.
Question:
What about the use of Samsung’s Magician 4.6? Did you hhave any problems to get it installed and working with the Samsung SM951?
For me the Samsung tool in combination with the 256 GB Samsung SM951 AHCI SSD killed my Win10 installation (the system just freezed after a few seconds). I was not even able to boot into the OS in safe mode.

@Fernando
About SAMSUNG Magician 4.6:
You said have your W10 killed when trying to use Magician.
This is a very interesting information, because I think now Magician is the source of the troubles for you and for me.
I explain:
For you, I assume you used SM951 as a primary OS W10 bootable pure AHCI mode. And when you started Magician , this application killed hardware structure of the SM951 and so killed your W10 OS.
For me, I used the SM951 as a secondary drive, in pure AHCI mode, and the first 2 days I had done some performance tests on this new PC and all was running perfectly because I had not installed Magician.
As Crystaldiskinfo and some others tools did not recognize the SMART features of SM951 as i had reported you in a post few days ago, I thought that the SAMSUNG Magician was able to report the SMART infos.
So, i installed Magician, But doing that, Magician killed the SM951 when trying to access the SMART infos. Obvoiusly my W10 drive was not killed because it was running on a 750 PCIe NVM card.
I understand now why the Distributor writed me to not use Magician tool because SM951 is an OEM device… and Magician was designed for Consumer Samsung SSD only !!
Thanks, Mrs SAMSUNG…

So, at the moment I recommend to NEVER try to use Magician with SM951 !!

On your side, is your SM951 always alive (without Magician installed) ?
Can you try to use your SM951 as a secondary drive AHCI mode ?
What size is it ?

I have seen somewhere on the net that the Eluktro Pro-X Performance 512 GB AHCI TRO - PCIe 3.0 x4 M.2 marketed in US only (at a better price) is stricly the SM951 512GB. And in a technical data sheet it is clearly said that NEVER try to do a Secure Erase (i assume with Magician Tool) on this product because it destroy the hardware.
Compatibility:

“The Eluktro Pro-X Performance PCIe M.2 SSD is compatible in a wide variety of systems, so long as support is built into the system UEFI BIOS code. Please contact us if you have any compatibility questions. Below is a general compatibility guide:

WARNING: Do not secure erase this SSD. It may render it useless and will void your warranty.”

What is your opinion ?

On your side, is your SM951 always alive (without Magician installed) ?

I haven’t yet reinstalled the OS onto the SSD, but I hope, that I will succeed.

Can you try to use your SM951 as a secondary drive AHCI mode ?

No, I want to use it as system drive.

What size is it ?

On your side, is your SM951 always alive (without Magician installed) ?

Meanwhile I was able to reanimate the SM951 M.2 Ultra AHCI SSD by doing a clean install of Win10 x64 and avoiding to install Samsung’s Magician
Here are some fresh benchmark results: 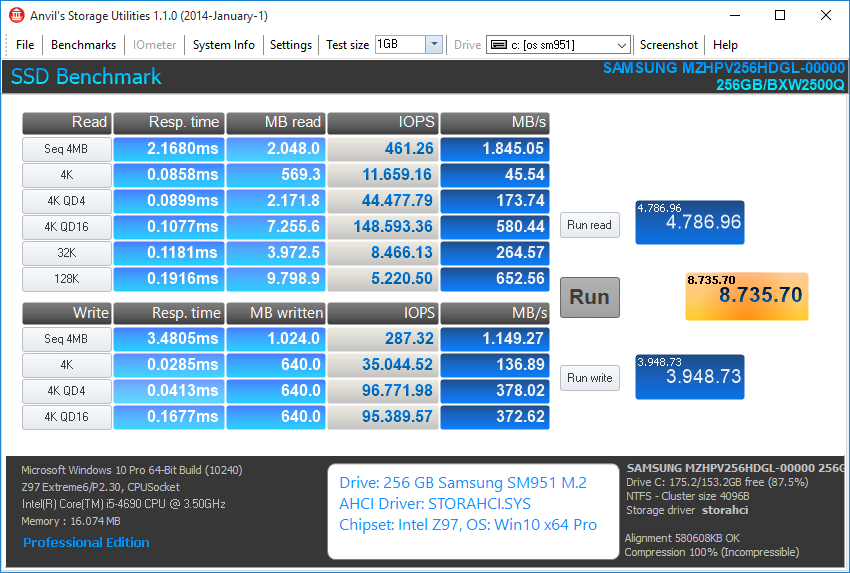 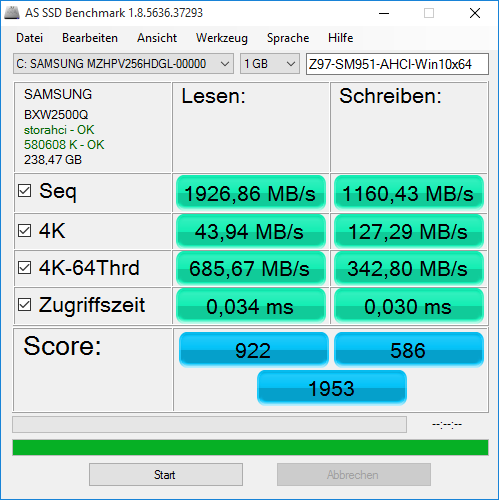 @Fernando ,
So, it is a good news your SM951 was not destroyed !!!
As i reported you if you run Magician the warranty is avoid, this was confirmed me by the supplier !!!

Can you tell me now how you can get the SMART infos of this SSD ? (CrystalDiskInfo, and lot other tools do not detect this device…)

You should better ask Samsung and not me.
Samsung SM951 users probably have to wait until Samsung releases a new Magician version, which really works with the SM951 SSD and doesn’t destroy it.
Currently we have the situation, that the tool, which should just monitor the health status of the SSD, kills the device itself.

have you investigated why this is the case? maybe a driver gets installed? i think intel delivers such a driver for their newest SSDs

@e.v.o
Intel delivers a NVME driver for its 750 NVME device.
I assume Samsung will deliver also a NVME driver for its SM951 NVME version when this one will be marketed (in the coming months ?)
The current SM951 AHCI version seems not delivered with a specific driver.
This is an OEM product and so the Tools for the consumer (such as Magician) are not only ‘ready and validate’, but are dangerous…

@e.v.o
Intel delivers a NVME driver for its 750 NVME device.
I assume Samsung will deliver also a NVME driver for its SM951 NVME version when this one will be marketed (in the coming months ?)
The current SM951 AHCI version seems not delivered with a specific driver.
This is an OEM product and so the Tools for the consumer (such as Magician) are not only ‘ready and validate’, but are dangerous…

Yeah, cause it’s a NVMe driver Intel is shipping. There is no need to so for AHCI

But how does Samsung or the OEMs who put these drives inside there laptops handle the situation? Do they simply put the drive in and hope for the best since it is working but maybe not as fast as it could be?

But how does Samsung or the OEMs who put these drives inside there laptops handle the situation?

The AHCI variant of Samsung’s SM951 is running fine, but there is currently no tool available, which is able to read the S.M.A.R.T. values and to monitor its health.
Warning:
Users of a Samsung SM951 should not even try to get Samsung’s SSD tool Magician v4.6 installed! According to my own experience this tool in combination with the SM951 AHCI SSD will induce an immediate and not repairable system freezing.
The remarkable delay of the NVMe variant, which had been announced in April for being available in May, verifies Samsung’s current problems.

It would be better, if you start a new thread within the same Sub-Forum "Solid State Drives". You can give it a title like "Benchmark comparison of the newest/fastest consumer SSDs".

@Fernando
I have done some tests using a SM951 NVME 512GB (as a secondary media).
I observe very bad performances (half of i750 NVMe, and near half of SM951 AHCI 512GB) !!!
I don’t understand why.
Is it due to MS native driver ?
Here are some screen shoots. Comments and suggestions are welcome.
DriverController Infos: 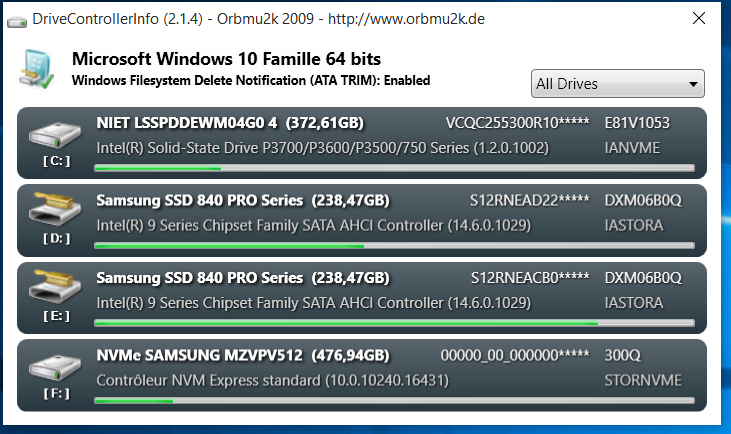 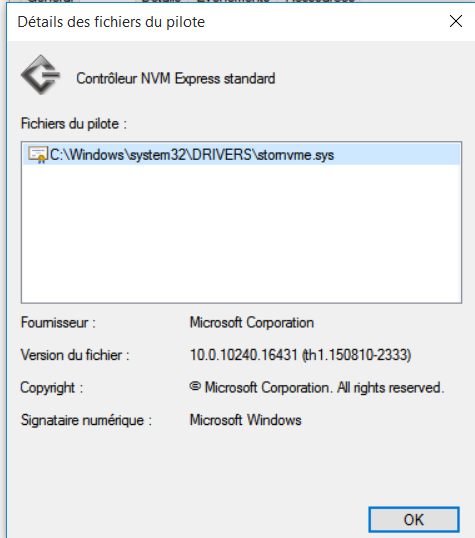 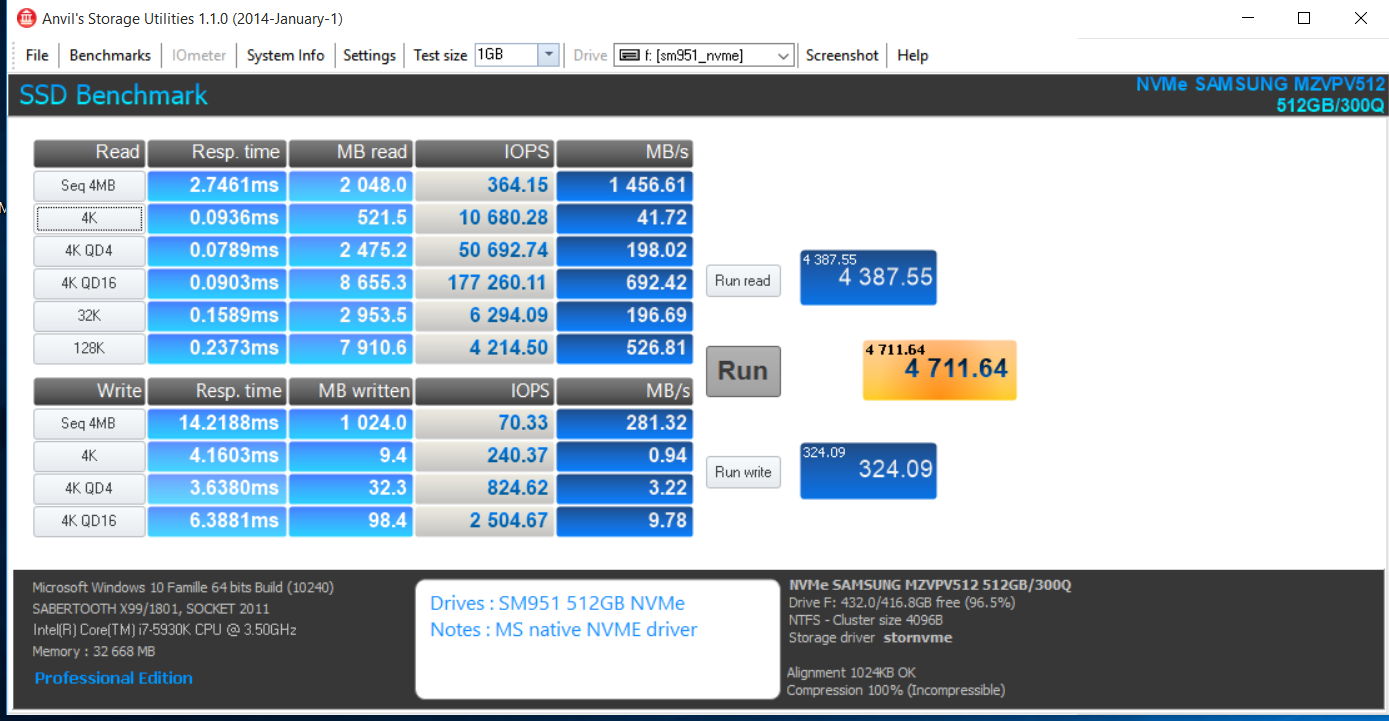 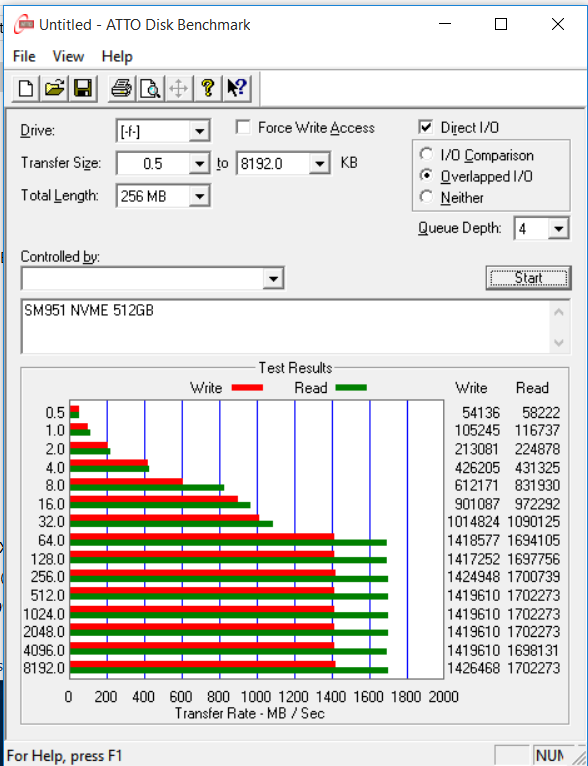 I stopped the ASSSD bench due to very slow 4K performance: 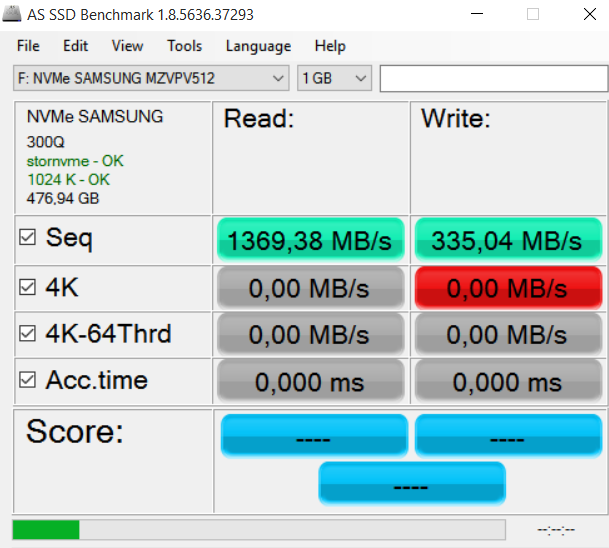 Why CURRENT Link Speed not at 8 GB/s ? 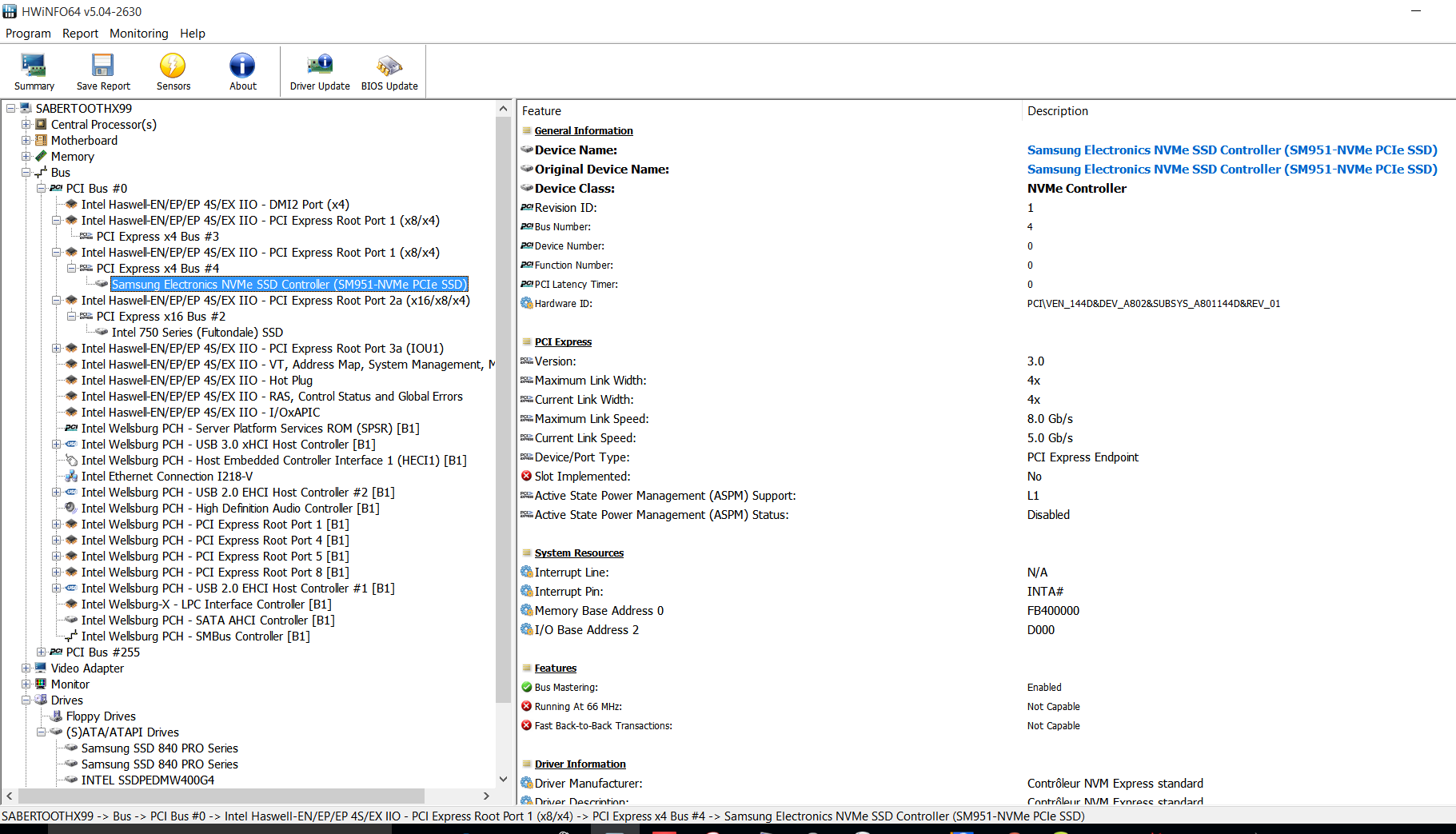 Since I don’t have any experience with a Samsung SM951 NVMe, I cannot answer your questions.

Make sure you turn on Dynamic Storage Accelerator in BIOS, other than that some benchmarks will not be useful with the Samsung nvme drive due to force writes probably, the Intel nvme drive is faster in some ways and slower in other ways but that is due to the fact it has battery backup and has custom drivers from Intel.

@mjgr33n
Thanks for your suggestion, but I don’t see any ‘Dynamic Storage Accelerator’ option somewhere in ASUS SabertoothX99 BIOS v1801 menus !

May I ask you to publish your screen shoots of ANVIL and AS SSD benchmarks, so we can compare where is the problem ?

Controller Firmware is “300Q” on my side and it seems very strange that my SM951 NVME device Serial Number is zero.

Thanks for your suggestion, but I don’t see any ‘Dynamic Storage Accelerator’ option somewhere in ASUS SabertoothX99 BIOS v1801 menus !

Have you looked into the "Storage Controllers" section of the UEFI BIOS?