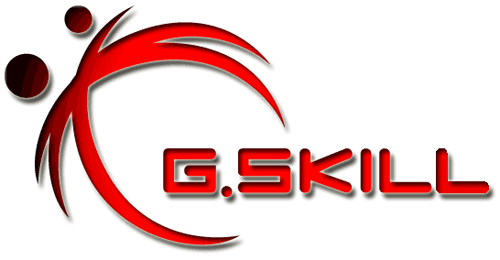 Why hello there dear reader. I thought we would get back to something you are used to me doing here today, a review of G.Skills F4-3200C15D-16GVK memory kit. Why this particular kit? Well, I noticed this kit does not seem to have any reviews for it which I found highly unusual for a kit of this calibre, in fact it would appear many G.Skill memory kits particularly over the last year or so have not got the review they deserve. What's up with that G.Skill? Perhaps I'm old fashioned, but I like to know exactly what I'm buying into before buying it.

G.Skill are a name that should not need any introduction to anyone by now, they have a reputation for consistency, quality, and above and beyond testing with their products regardless of price. It's for these reasons that many enthusiasts buy G.Skill, although for whatever reason they do seem to have trouble in reaching out to the wider audience despite branching out selling mice, mice pads, headsets, keyboards, flash memory and SSDs. I can only imagine it's because there are just not very many G.Skill reviews in contrast with the competition at least here in the west. Let's see if we can't balance the scales a little bit today, shall we?

Off to the Pictures!

So here we go, time for a bout of pretty pictures for you all to ogle over, and ogle you will. I know it, you know it. Everyone knows it. 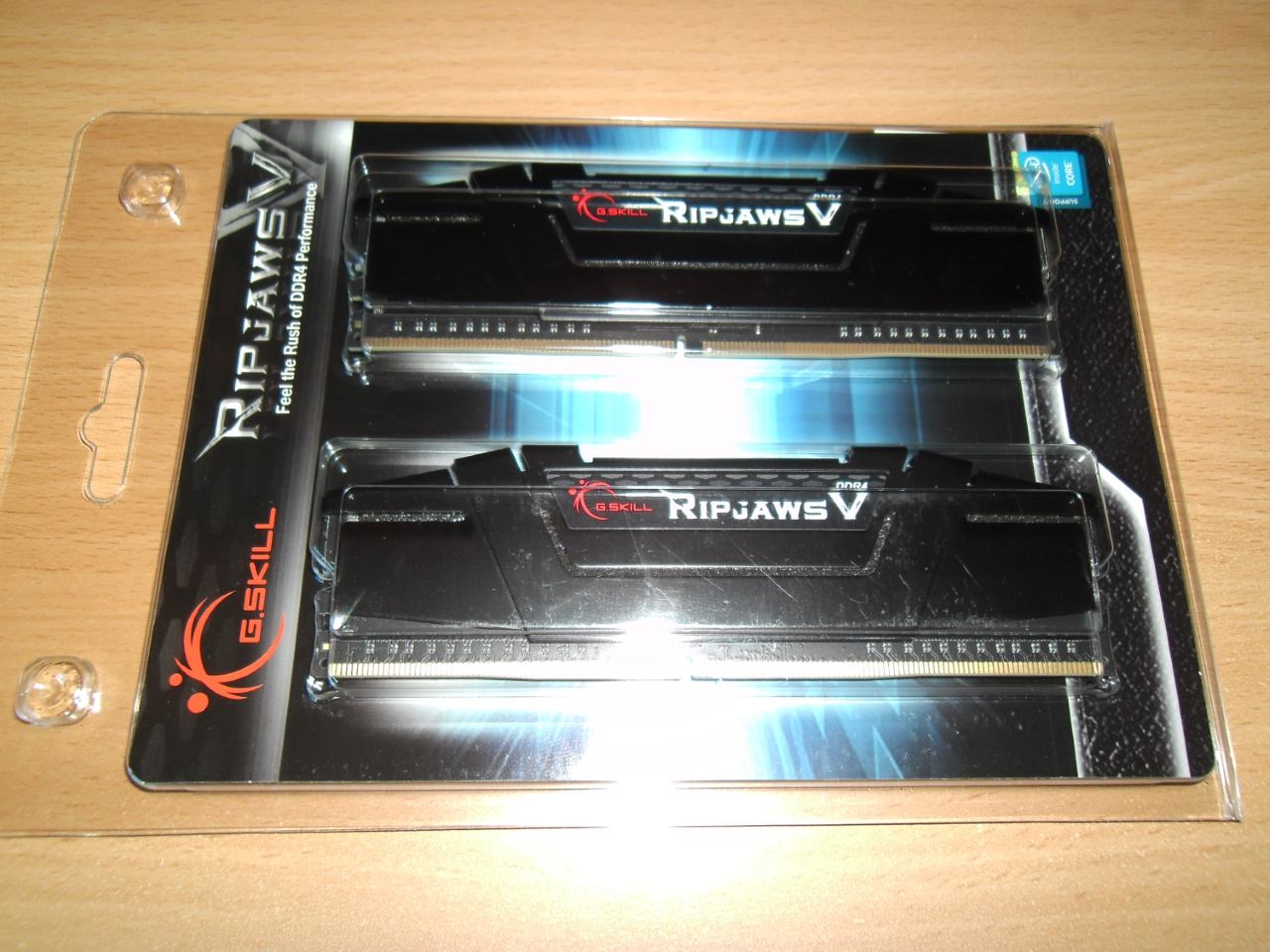 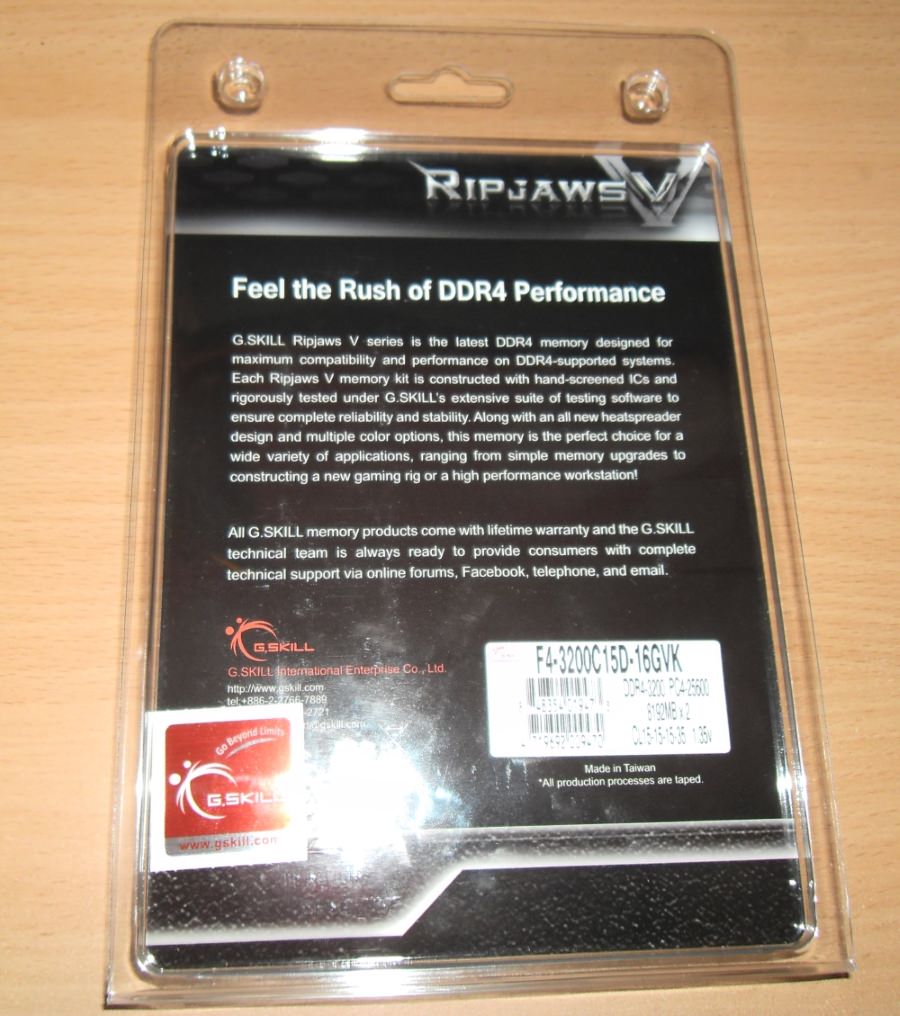 Packaging then, nothing out of the ordinary to speak of, I do wish memory manufacturers would take better steps in ensuring the product does not get damaged during transit though. This packaging does not offer any real protection save for perhaps the jiffy bag it's shoved in from where you make your purchase, hardly ideal protection but at least the modules have heatspreaders which will help protect them a good deal which is more than what can be said for what WD do with their Green line of SSDs. 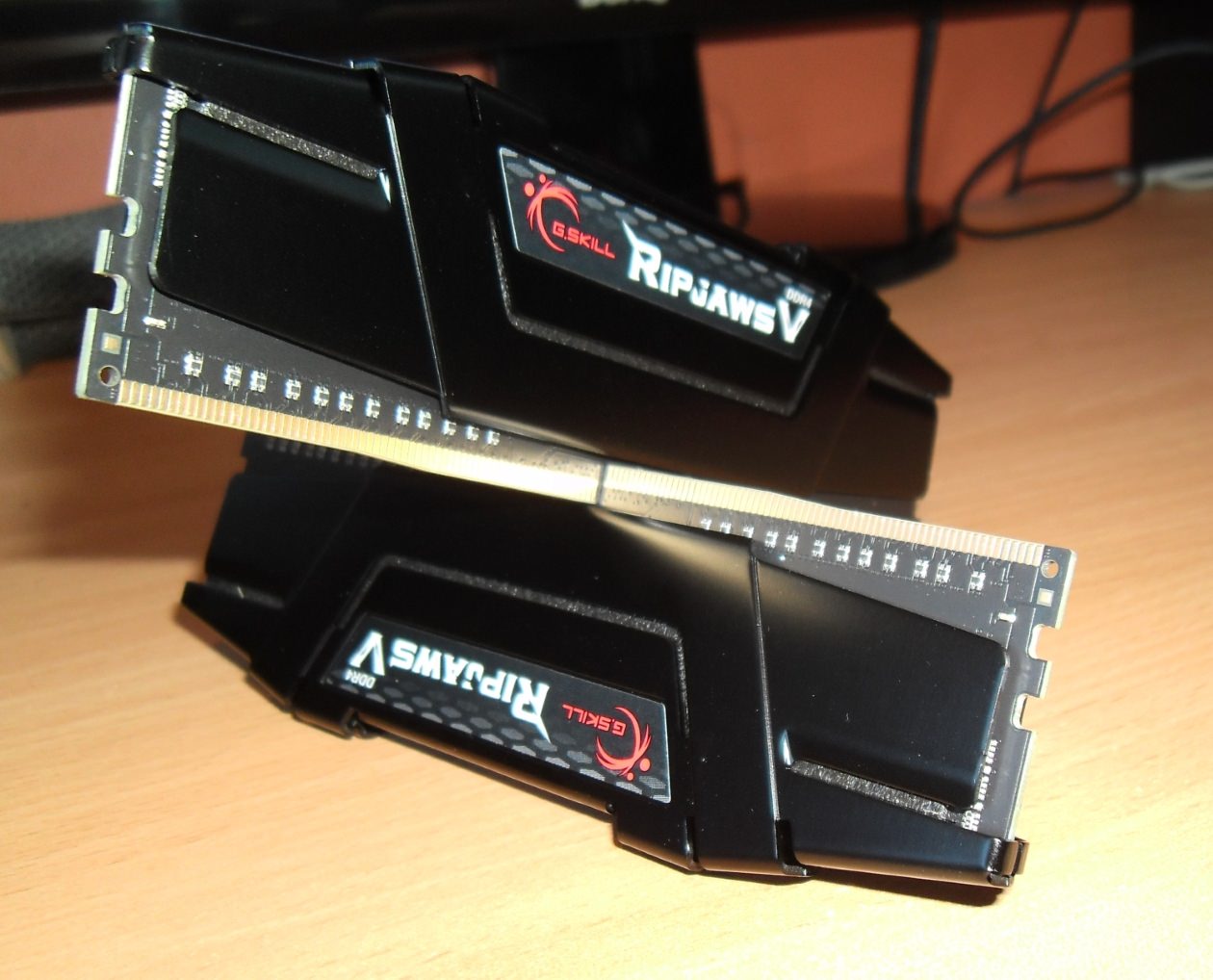 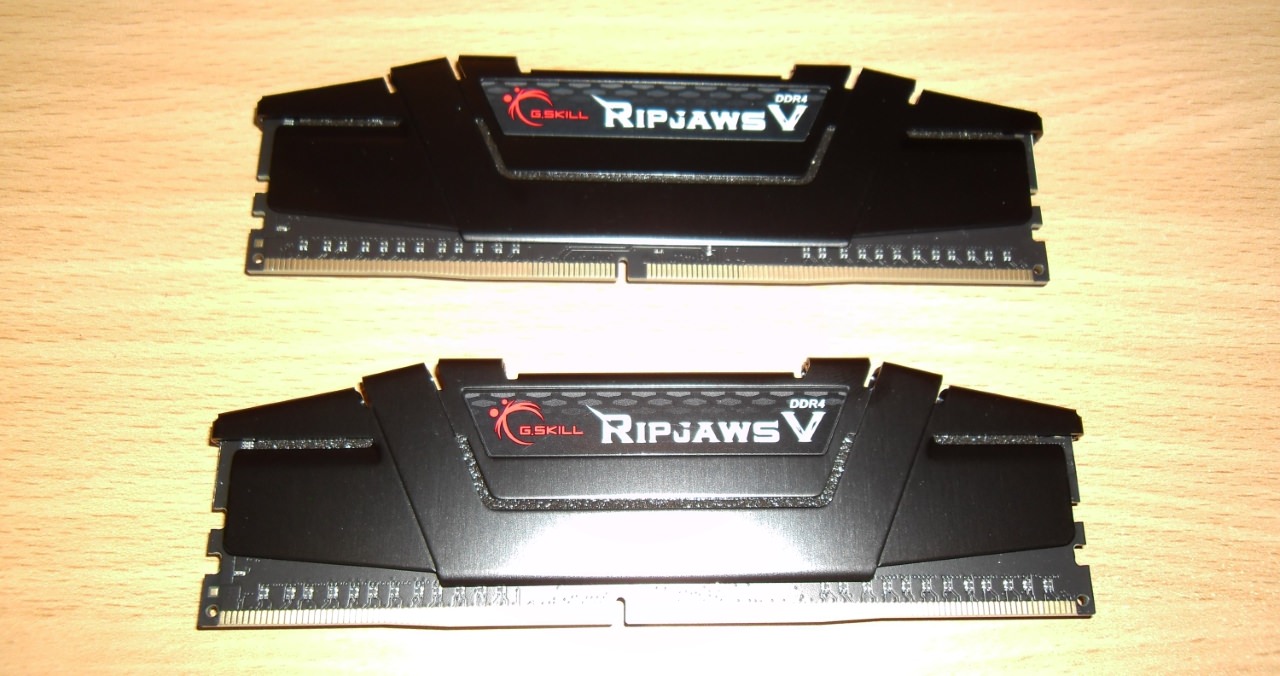 Oh me, oh my, I say. Don't you look beautiful in that black little number and those sexy curves! Needless to say I like this design, a lot. I cannot think of a single system this colour scheme and design would not go with. It's elegant, but subtle, while also being extremely tidy looking and low profile. If you are someone who still uses a air based CPU cooler I doubt you will have a problem loading your system up to the gills with this memory.

The new test system is here again today to help us determine if this memory kit is the bees knees... or if it can just buzz off.

Not many benchmarks today, that is because AIDA64 has a nice all in one test that sums almost everything up quite nicely. As it gives a really quite good overall picture and because Zen is sensitive to memory speed and timings I'll also be using the Call of Pripyat benchmark to see how FPS is affected with faster memory when using Zen. 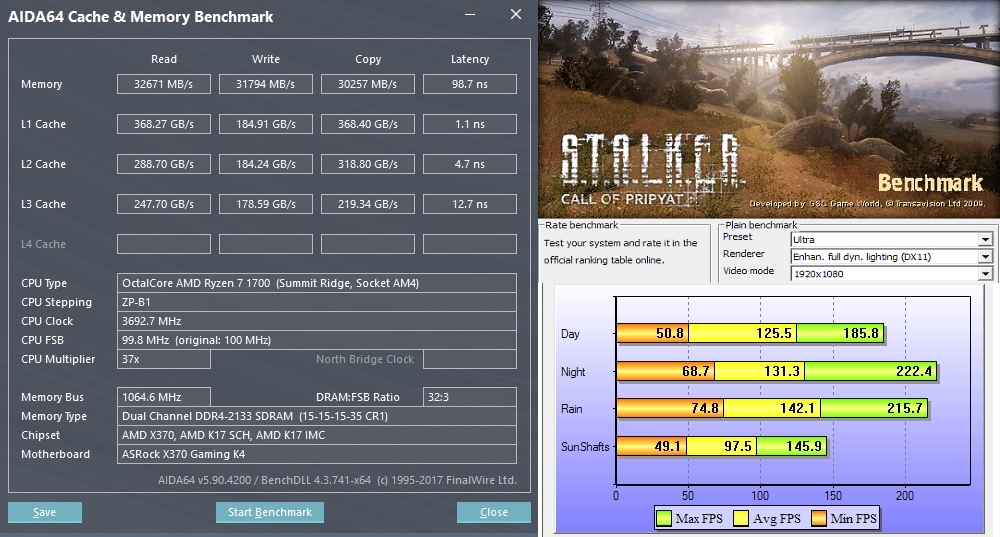 First bout then, 2133MHz CL15. Right away we see that performance for the Ripjaws is good according to AIDA but a more real world test shows that memory bandwidth and latency causing issues with applications that are memory sensitive particularly in more demanding situations as can be seen with the minimum FPS for the Day and Sunshafts tests. Don't use 2133MHz memory if you want to game or use memory sensitive applications on Zen is the moral of the story here folks. 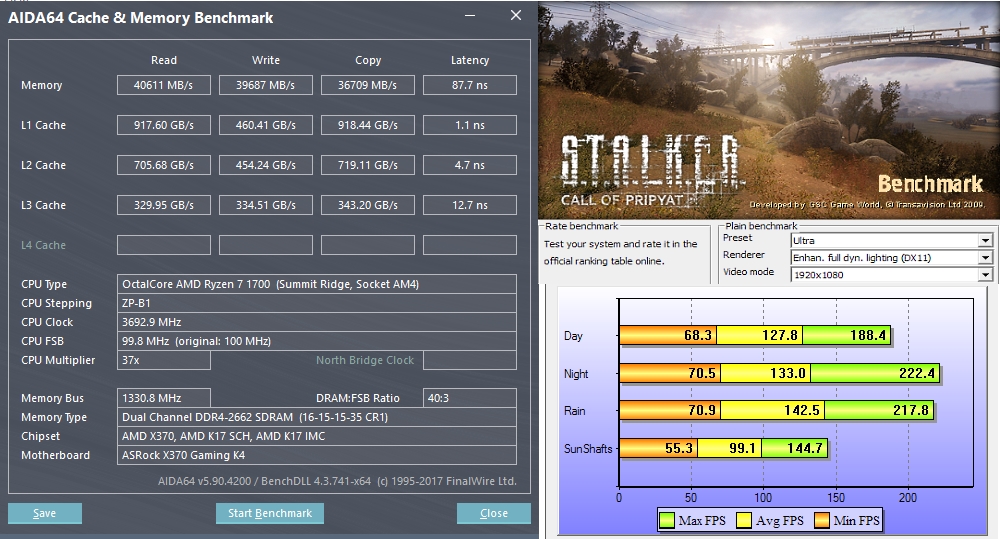 Second round stepping up to 2666MHz CL15 (no I don't know why AIDA reports CL16, it is set to 15 in the UEFI) once again shows some good AIDA results for the G.Skill Ripjaws and this time the Stalker benchmark backs AIDA up. It's fair to say if you have a Zen based system 2666MHz RAM really ought to be the bare minimum speed you look at. 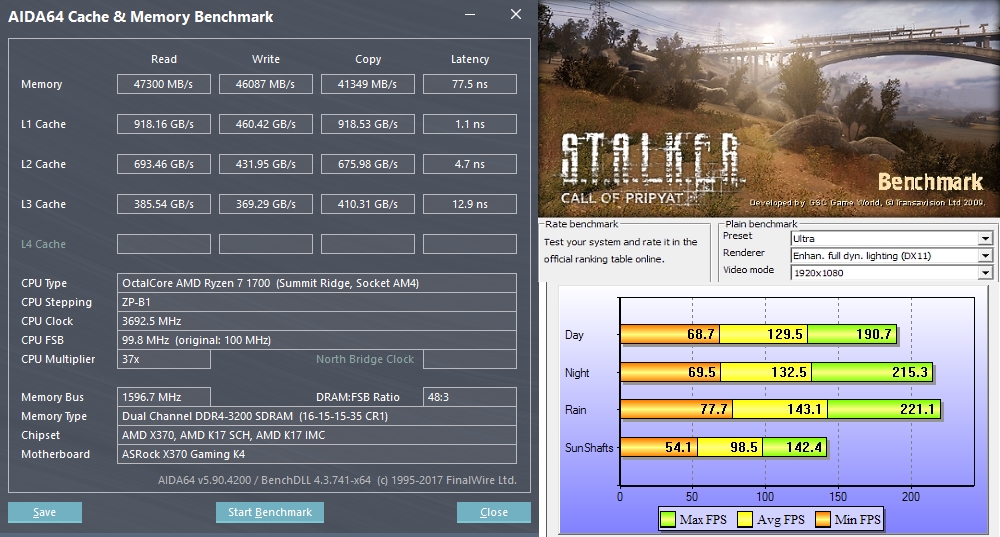 Lastly we reach the Ripjaws XMP of 3200MHz CL15. Once again AIDA mis-reports the CAS latency but otherwise shows healthy numbers. The Stalker benchmark also backs AIDA up again confirming any application sensitive to memory should perform well. It's worth noting that performance in the Stalker benchmark seems to level off as well but it is worth remembering that AMD are currently working on new AGESA code to significantly improve memory compatibility with 3000MHz / 3200MHz memory kits so this result could be an anomaly of 3200MHz memory kit compatibility not being quite where it should be yet so don?t be surprised if there is another performance bump when that memory compatibility gets better.

Once I started to overclock it became apparent that memory compatibility on the Gaming K4 with this 3200MHz Ripjaws kit isn't quite there yet as results became inconsistent with the Stalker test so instead I used the 2933MHz divider. It is very likely to a lesser extent this current compatibility issue is why we did not see any improvement when going from 2666MHz to 3200MHz in the earlier tests. I'm certain this issue will be fixed once AMD release the new AGESA for high speed memory compatibility but for now let's see what this kit managed with the 2933MHz divider. 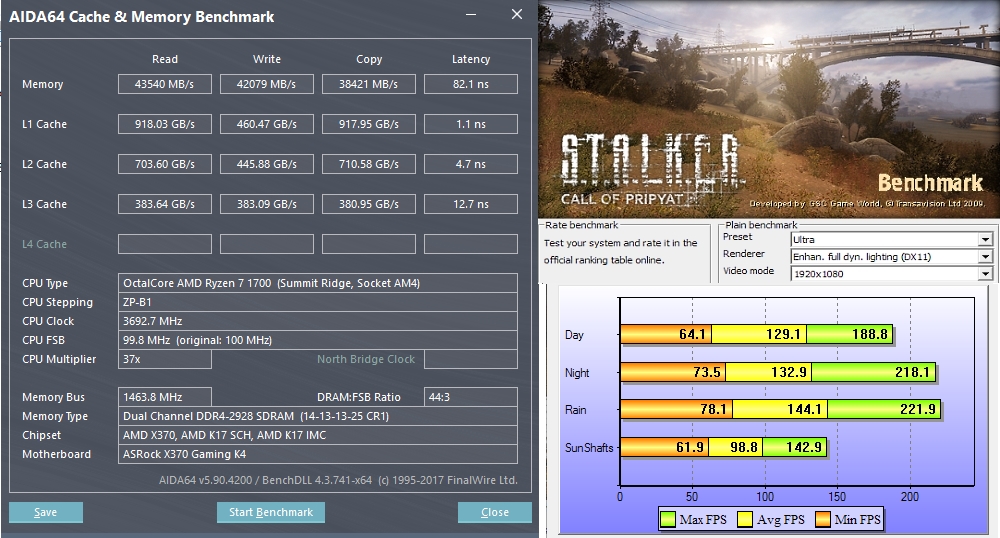 Well will you just look at all that extra free cheddar! This was only a quick ?OC? session but 14-13-13-25 timings with the default 1.35v and the minimum FPS results in the Stalker test speak for themselves a 6.6FPS increase in the sunshafts minimum FPS test is really rather impressive and these results give a nice window in to the kind of performance laying in wait once this pesky memory compatibility issue that?s plaguing all AM4 boards gets resolved.

Hopefully these results also once and for all put to bed the nonsense that Zen is a bad platform for gaming too. If it was a bad platform for gaming, these results would reflect that yet they do not. Quite the contrary in fact once you give Zen some 2666MHz memory as a bare minimum the performance really starts to take off and once you hit 3000MHz or faster the returns you will see are really quite staggering Zen just gets better the more bandwidth you give it.

Now AGESA 1.0.0.6 is released here is the overclocking update for this G.Skill memory kit. The first thing you'll likely notice is the change of boards, this is simply because the Gaming K4 has some outstanding issues with this memory kit - the best the K4 is currently capable of is 3066MHz 14-14-14-25 1T with the default XMP voltage of 1.35, which while still good, it made the board impractical to use for overclocking tests with this memory kit. 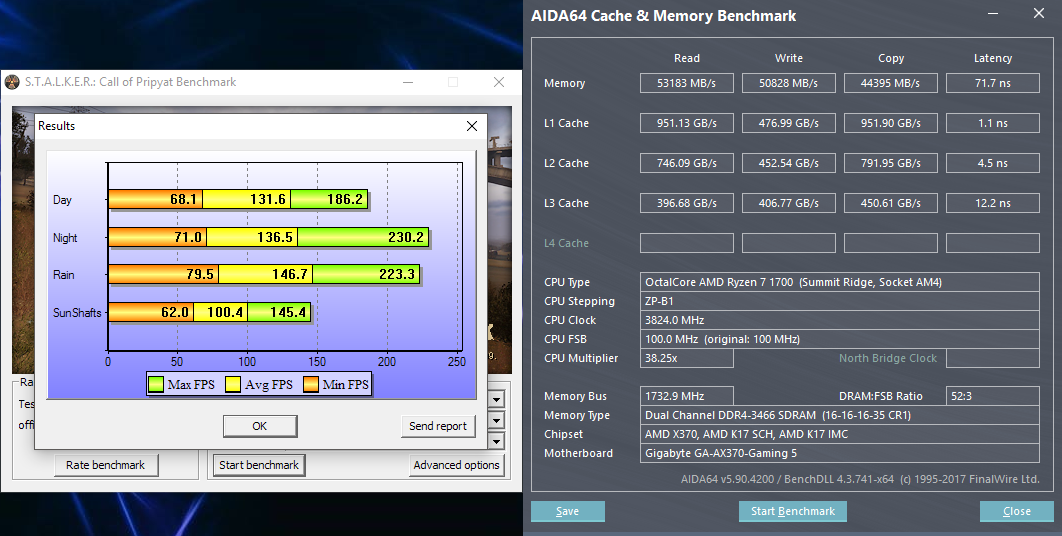 For many years now the joys of true memory overclocking have been robbed from us all due to ever more stringent binning processes, these days unless you buy stupendously expensive kits that are often not worth the money asked for them you buy a memory kit and what it states it is capable of is exactly what you get with marginal to no wiggle room. Usually you will be lucky to get a kit that you can merely tighten the timings up a bit with but that is it. It is fantastic to see with these results that G.Skill have not forgotten the excitement and joy true overclockers get from discovering the best frequency limits and timings a memory kit is capable of without forcing you to buy a outrageously priced kit, that in itself G.Skill should not only be applauded for but why more people should buy their memory. While I haven't had time to discover the upper most limits of this kit it is unquestionable that 3466MHz with CL16 timings at 1T is simply fantastic.

Focusing more on applications that rely on the system as a whole we can see the Stalker benchmark shows a bump in performance from the older 2933MHz results but it is not a large difference, still, if you are looking to completely remove any possible bottleneck for 1080p gaming and to a lesser extent 1440p any memory kit in the 3200-3600MHz range with good timings will do exactly that.

G.Skill have earned the 100% score I gave this kit every step of the way.

This kit is certainly fast isn't it? 3200MHz out the box is slick as oiled lightening. It's not as fast as some other kits, but there is no argument to say any performance gains you get from any memory above 3200MHz is anything but negligible at this point. With a little more time for faster kits to become the norm we will have a better picture on this front for Zen though.

So, the modules perform great current compatibility issue aside, look great, have some of the tightest timings you can get at this frequency, and are low profile allowing for compatibility in most cases. Overclocking, or perhaps I should say AMDs current interpretation of memory overclocking, proved quite fruitful even though compatibility is currently patchy at 3200MHz. I'd suspect when (if) AMD get to adding dividers faster than the XMP profiles will allow that this G.Skill Ripjaws kit will prove to be a ideal overclockers companion. "Ah.. but what about price?" I collectively hear the audience cry. Thought you got me there didn't you? Well, in terms of price I think this kit is extremely well priced at 120 pounds, however I am also aware that the current shortage of memory ICs has lead to memory prices somewhat skyrocketing, but I can only rate a product based on the price at time of review. So with that in mind let's get to scoring.

This doesn't happen very often, a perfect 100%! G.Skill have clearly sprinkled magical PC god pixie dust on these memory kits they are a great balance of timings, speed, and price with seemingly good overclocking headroom to boot (I'll update this article once the memory compatibility issue solution lands). You can't blame G.Skill for AMDs current lack of memory compatibility at high speeds so you can?t take points away from G.Skill for that.