In short, I’m lazy and don’t want to have to manually install updated driver components for the intel HD3000 IGP all the time so I made this package, the drivers are all newer than what you get from the vanilla 9.17.10.4229 driver package intel offer on their website. Only aim was to make a lazy mans shortcut so I have no idea what compatibility issues these drivers might resolve but unlike if you just let Windows install the 4459 driver through WU this package restores/maintains hardware encoding QuickSync capabilities with encoding software like Handbrake. OpenGL support for Windows10/11 is also fixed, just extract the archive with IZArc or whatever your preferred archive utility is and run Setup.exe to install like you would any official intel driver.

Resolved:
No hardware H.264 encoding acceleration in software such as Handbrake with the Microsoft Windows Update (WU) 9.17.10.4459 driver.
Fixed OpenGL support in W10\11, restoring the functionality to 3.1.

++ Note: WDDM 1.3 features such as Miracast are not supported for these processors.

Thank you for this! Will help with my compatibility builds ( also no copyright BS

Obscure is what I do

Its still a pretty decent piece of silicon for hardware H.264 media encoding.

@ket thanks for this. Also i know that sandy bridge only support opencl in cpu.

@ket The intel control center is control panel? It seems the same to me.
Also if you can found an opengl workaround would be excellent.
It is well known that the driver in windows10-11 dont install the opengl.

*the packet works also at windows 11 i tested it.
Both gpu and hd audio installed correctly as the opencl.

@boombastik yep its the regular CP I’m just referring to it as its referred to in the intel driver package. Try testing OGL, its limited to v3.1 but it appears as though its installed, at least according to GPU-Z. 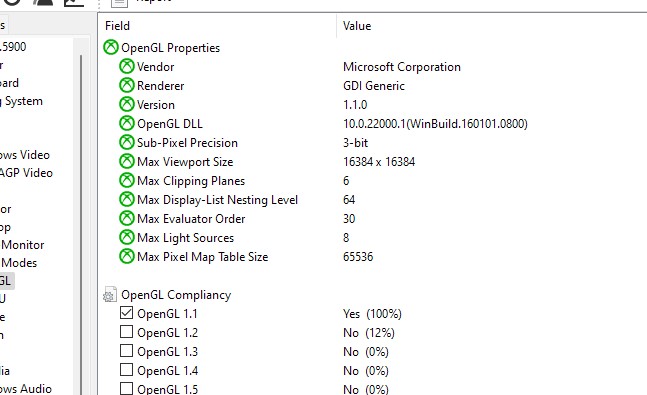 @boombastik at a glance the problem isn’t with the driver inf file it has OGL stuff in there so its probably an issue with the installer itself. Transplanting the installer used with the 6th gen IGP drivers might fix it.

Yes i know that that the inf file is ok, i also tried myself and i failed. You have more experience, if you find a workaround with the help of the 6th igp installer i will be glad.

I’ll pull out some components and chuck them over the old installer files. It probably won’t work, but who knows. If that doesn’t work I’ll dig deeper, see what differences there are with the 4229 inf for clues and if need be I’ll try transplanting some newer DLLs for the driver as that could be another cause if one of the OGL DLLs or igfxsrvc is “broken” on W10.

EDIT: Well, seemingly the problem isn’t with anything I thought it would be but a compatibility problem with W10 itself. I’m looking into some sort of workaround/fix but basically at this time people need to hound Microsoft to fix it. Anyone with W11 (why would you do that to yourself?) install AIDA and see if the OpenGL driver is installed correctly.

The problem exist also with windows 11 because I have them installed and the Pic with Aida is for my machine with windows 11. This problem exist all over the internet that hd3000 don’t install correctly with opengl in windows10 and the answer from Intel is that hd3000 support only windows 8 so because Intel provided as is them, Microsoft don’t do anything.
For example:
https://answers.microsoft.com/en-us/wind…2b-978e834cc118

@boombastik is there any version of HD3000 drivers where the OGL files are successfully installed? If so transplanting the files from that package to this custom one should work.

@boombastik hmm… well, this looks like it might be something that can’t be fixed outside of intel, the installer doesn’t like me editing the inf, I’ve tried making a Windows level fix that should work but doesn’t - at least not in 21H1 W10 builds, I’ve tried using different installers, no newer DLLs exist in other driver packages and I’ve even tried hacking the ig7icd DLLs to make them think they are ig4icd DLLs in case the issue is with the DLLs themselves.

Not much left I can try, I’ll try editing the inf file to force it to use ig7icd DLLs rather than hacking the DLLs themselves to see if that works and I can try some older DLLs, another solution would be to change the device ID of the HD3000 so it thinks its a HD4000 but modify a driver to install HD3000 components. Unfortunately the latter (and a high probability of working) solution would require dumping a HD3000 vBIOS, modding it, then injecting it back into the system firmware, fixing checksums and flashing, so overall, not very viable.

@boombastik after some more investigations it looks like the OGL DLLs are flat out broken or incompatible. The DLLs do in fact get installed (just check syswow64 and system32 folders) but they don’t load, trying to register the DLLs via an elevated command prompt by typing regsvr32 ig4icd64.dll then trying to register the 32bit DLL in syswow64 results in the same error being spat out; the module failed to load. Ergo, the installer and inf are perfectly fine the biggest culprit is likely Windows itself as up to build 1809 or so you can likely get the DLLs working with a compatibility administrator database file. Beyond that, literally nothing works unless someone can debug or rewrite the OGL DLLs for W10. You can experiment slotting in other intel OGL DLL files weather that be ig4icd64 or ig7icd64 (the latter needing to be renamed and edited with a hex editor) then using regsvr32 via an elevated command prompt to try and fudge something together that’ll work but ultimately I think the only viable way to fix this issue is for someone to take the DLLs and debug or partially rewrite them so they will work on W10.

EDIT: There is a possibility that igfxsrvc.dll or igfxsrvc.exe are to blame for the OGL DLLs not loading too.

Slightly updated install package to clean things up a bit and rewritten readme. Unless someone can fix the OpenGL problem this is as good as these drivers get.

EDIT: Small update on the OpenGL issue, there is a (very) faint glimmer of hope that this problem can be fixed. I’ve chatted with one Mesa dev from the media side hopefully one will come along from the compute side. @boombastik I’ve also discovered that with no HD3000 driver installed at all that Win10 defaults to OGL 3.3 in compatibility mode through Mesa 22.0. There is a tiny bit of hope yet

Hmm… well because I’m obsessive over these kinds of things I decided to disable driver signing and try to do some hoodwinking. If the supplied OGL drivers won’t work I figured maybe I could “patch” the issue with different DLLs. I was a little surprised to see that even pointing Ivy Bridge DLLs in the INF for HD3000 don’t seem to work either and HD4000 IVB parts are supported on W10 so we are back to this being a Windows problem or the OGL files with the driver are completely borked @boombastik. Still looking to see if I can get some sort of workaround working but if I do it will absolutely require the use of a modified INF so people will have to disable driver signing in W10, if that ends up being the case I’ll include a few batch files and a watermark remover for lazy people who can’t be bothered enabling/disabling driver signing all the time but don’t want a nasty watermark either.

@ket Do i need the slightly updated package if i have installed the previous one?