@ all users with an old nForce RAID system:

Preliminary Notes
Many users with an old nForce RAID system have severe problems, when they try to get Vista or Win7/8/10 installed onto their nVRAID array. Either the nVRAID array will not be detected at all by the OS Setup or the OS installation fails after the first reboot. Affected are mainly old nForce RAID systems with an nForce2, nForce3 or nForce4 chipset, who are able to support nForce P-ATA RAID and S-ATA RAID arrays simultaneously. These so-named “LEGACY mode” nVRAID systems need a special procedure to get any modern Windows OS properly installed. This guide has been especially designed for users with an nForce4 AMD (CK804) chipset running in RAID mode.
Note: None of the Windows Operating Systems from Vista up do support NVIDIA nForce2 and nForce3 RAID systems.

The following instructions are only an abstract from my original and much more detailed guides, which I have started at nForcersHQ Forum in May 2006 for Vista (>LINK<) and in February 2009 for Win7 >LINK<). Interested nForce RAID users can get there a lot of additional informations (as long as the linked guides are available at nForcersHQ Forum).

Since none of the modern Windows Operating Systems has nForce SataRaid drivers “in the box”, which are suitable for all nForce chipsets, users with an old (= Legacy type) nForce Raid system should do the following preparations:

Users, who want to install any modern Windows OS outside the nForce RAID array, should be able to complete the OS installation successfully without the need to load any drivers, but they will not see the RAID partitions and datas within their Windows Explorer and Disk Management.
The problem can be solved by installing the needed and appropriate nForce SATA and RAID drivers from within the running OS. This can be done either by running the installer of a suitable Vista/Win7-10 nForce chipset driver set or manually from within the Device Manager.

Hi Fernando, thank you for this guide.
Maybe I am completely brainless, but I am not able to use the Legacy patch.
“Rufus” says that the iso is not supported, “ISOtoUSB” is able to burn it on a usb stick but it won’t boot, it seems that the iso itself is empty…
And I can’t use the program to create a floppy becuse it is incompatible with a 64bit SO…


Update, I was able to make a floppy by booting a freedos usb stick.
BUT
The installation program says that it cannot install 64bit unsigned drivers… I cannot load them.
What can I do???

The installation program says that it cannot install 64bit unsigned drivers… I cannot load them.
What can I do???

The 32/64bit drivers, which I am offering within the start post, are digitally signed by Microsoft (they are even WHQL certified).
Which special driver did you try to load?

No special drivers, only the one you posted on this guide.
Windows Always says to me to load signed drivers and that unsigned drivers are not supported, don’t know why.
Strangely, even if I was not able to load the drivers on the install procedure, it seems that the installation went fine.
With your guide I was able to manually update the drivers.

I still doesn’t understand why WinXP64 won’t install at all, but at least now I was able to install Seven.
I linked this discussion on Vogons forum, credits to you.

@uazzamerican :
Thanks for your reply.

No special drivers, only the one you posted on this guide.
Windows Always says to me to load signed drivers and that unsigned drivers are not supported, don’t know why.

Do you remember the exact message you got?
Are you sure, that you tried to load the correct driver (SATA_IDE resp. SATARAID) with the matching architecture (32/64bit)?

Are you sure, that you did it according >this< guide?

I linked this discussion on Vogons forum, credits to you.

Please give us the link to your post at Vogons Forum.

The message is like "if you want to install the drivers choose “have disk” and select 32bit or signed 64bit drivers. Windows 7 64 bit doesn’t support unsigned drivers"
I have tried all drivers with no luck same message.

WinXP64bit appears to be unable to recognize the Raid-0 no matter what.

Anyway now I have a funcitonal win7 ultimate installation.

@uazzamerican :
Thanks for the quick reply and the requested link.

The message is like "if you want to install the drivers choose "have disk" and select 32bit or signed 64bit drivers."

This message is absolutely normal, if the user wants to replace an OS-in-box driver by another third party driver, because all Windows Operating Systems prefer to use the in-box drivers (no matter, if they are the latest or best). That is why you may have to force the installation of third party drivers by using the “Have Disk” button and navigating to the matching *.inf file.
By the way: I doubt, that you got such message at the beginning of the OS installation, because the “Have Disk” option is not available at this point.
Additional questions:

Hello Fernando,
This is the first time I have posted here and I have read 32 pages on how to install RAID drivers for win10 32bit on an old nForce 4 board, so big thanks to you and all your contributors as it looks promising.
My mobo is an Asus A8nSLI-premium and AMD athlon64x2 4200+ CPU.
I have win10pro 32bit installed on an OCZ-Agility3 60gb SSD.
Programs are installed on 2 WD Raptor 37gb HDD’s in RAID0.
The RAID0 is showing in the BIOS correctly as an nVidia RAID0 device and also during POST as an nVidia 68.9G device but in windows it doesn’t install.
I have installed the below drivers from within device manager as you have suggested one after the other in this order, “NVIDIA nForce Serial ATA Controller”, “NVIDIA nForce RAID Controller”, “NVIDIA nForce RAID Device” using the 32bit
9.98WHQL driver pack which was unsuccessful. Then I installed the 10.4 32bit driver that comes with your certificate using the same procedure, which seems to have installed more successfully but still not sufficiently enough to make the RAID0 drive show.

Would you be so kind as to give further advice as to what I’m doing incorrectly?
Also if I may here is a screenshot of the device manager for further clarity, which shows yellow exclamation makes against the Storage Controllers section. 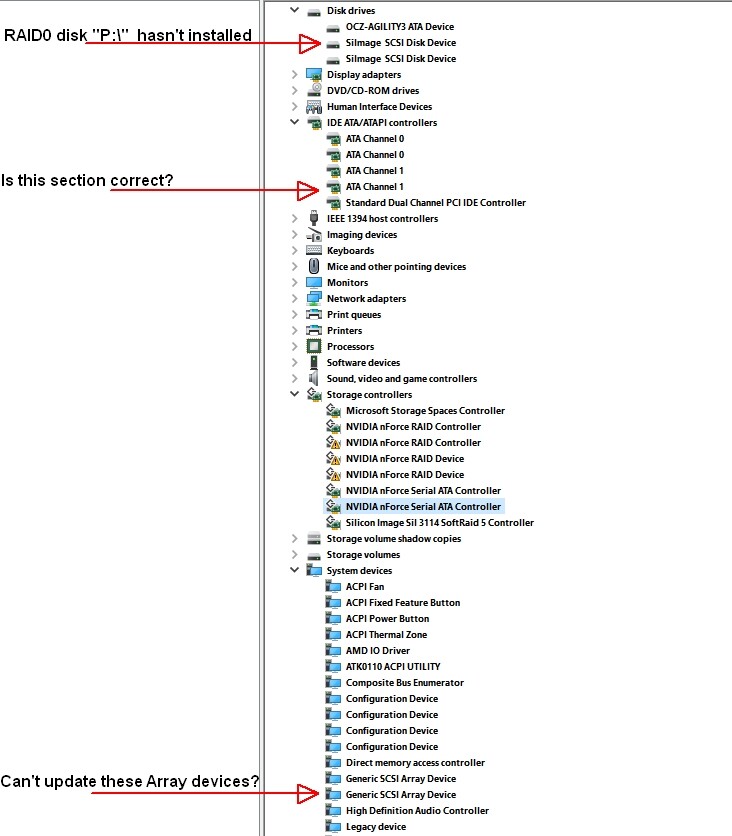 Unfortunately Microsoft has changed a lot, when they delivered the “Anniversary Update” of Windows 10.
If you want to do a clean install of Win10 v1607 (“Anniversary Update”) onto any nForce RAID array, you have to use a previously customized Win10 ISO file. Otherwise Win10 v1607 will not detect any nForce RAID array.
You can find a detailed guide and links to everything you will need >here<.
A guide about how to remove and integrate drivers from/into a Win10 image is >here<, a special guide about how to remove the Win10 in-box INF file named scsidev.inf can be found >here<.

Thank you so much for your quick reply Fernando, I will read those posts you have marked.