I have Clevo P750TM1-G.
Decided to add 2Tb Nvme SSD and CPU i9 9900k. Both don’t work due to old BIOS.
I have contacted Eurocom as they have the same laptop X4C ( Clevo P750TM1-G) and asked
them for a BIOS upgrade to get working big SSDs and new CPU.
They provided 2 archives :

2) 2nd one has 2 files: WMeset.exe(run from Windows) which should prepare ME and reboot OS prepared for further BIOS flash. The 2nd file - Proceed.exe (according to its size all BIOS parts are included)

The actions I performed:

- Tried to run WMESET.exe but nothing happens at all. I can just see it is running in the processes.
- I have downloaded previous BIOS from Eurocom website.
- Tried to run WMESET.EXE from here to check if the problem with my PC. This time the system reboots with all fans running.
- At that moment I had to run Proceed.exe according to the instruction but I was not sure that the previous version of WMESET can be used instead of provided one.
- Here I decided to make my BIOS backup. Before actual flashing. This was a fatal decision.
- Turned off the laptop. Disassembled it.
I have found a chip Winbond 25Q80DVSIG(soldered one)
I have connected a clip to the chip and to my GZUT Dream Pro 3 programmer. Chip was detected successfully so I pushed read button and saved backup. But the size looks too small, just 1042Kb (BIOS rom size is 8192Kb)
- I assembled my laptop.

The laptop stopped booting at all…
I still can charge it. Fans are working. Keyboard backlight is working. But the screen is dead.

I would be very appreciated for any ideas, help or support.

P.s. I also has another CH341A programmer if it can help.

Update:
Found another chip on MB : MX25L6473E. Looks that this is the main BIOS chip. Did not touch it yet.

Update 2: both chips are detected successfully by CH341A and by GZUT Dream Pro 3. Made backup of both chips by both programmers. But PC is not booting at all. No POST visible. Just fans and keyboard backlight…

@Lost_N_BIOS Can you please help with the problem described above?
Just some ideas what could go wrong and what can I try to do?
Sorry for bothering you.
Thanks in advance

@iAndrew5 - No bother! Sorry, for late reply, I can never keep up here

Due to what you did, best you ask them directly how to use package #2 before we do anything else (after recovery)
DO NOT use old BIOS with new EC Flashed, this may not (read usually) work, or is that what caused your brick

I assume so, you did not boot after this I think. Also, unclear, did you run Proceed.exe or not? If not, that would be the fail also (since old BIOS in there with new EC FW still)
Do not use anything “previous” with a new BIOS package you received, why would that even be a consideration?

W25Q80DVSIG (1MB) is EC FW or vBIOS, this is not BIOS. The failure happened before you read this chip, that would not cause any issue. Send me this dump along with the EC FW you flashed, I will check and see if same
** Sounds like you now have OLD BIOS, flashed in with NEW EC FW, correct?
Do you have generic CH341A too, or just the Dream Pro? If yes, please dump BIOS with CH341A and this software/version >> CH341A v1.31(1.4) (CH341AFree) (This is the name of the folder), choose 25 type and 64Mbit/8MB and then read, verify, save
https://ufile.io/p21lj9ck

MX25L6473E is the BIOS. Dump this, send to me, along with latest BIOS. Also, please confirm my thoughts above ** Please dump this with CH341A as noted above, and your Dream Pro, so I can compare and see if dream pro at least reads this chip correctly.
For now, put back in OLD CPU, and tell me this CPU’s model and SSPEC (off top of CPU) - Unless you have faith, or know this BIOS they sent you works for sure with the 9900K, if you feel this is true then you can leave it in there.
But if it was me, I would put back in previous CPU, get things back up and running again, then proceed with the BIOS/EC FW update again and once done swap CPU’s

@Lost_N_BIOS You are right there should be an old BIOS with the new EC FW.
BIOS EC FW before flashing: 1.05.03
After I successfully flashed ECs. BIOS shown them 1.07.16
Then I run Proceed.exe but there was an error that ME is not disabled so I stopped the application, turned off the PC. Disassembled it and made BIOSes backups by Dream Pro3 & CH341A.
The link to the folder with my original BIOS backups by both CH341A and Dream Pro 3 as well as files (including manual how to flash ECs & BIOS) from Eurocom(ECs & BIOS):
https://drive.google.com/drive/folders/1…nJj?usp=sharing

Let me know if you don’t have access to the google drive.
CPU TOP: 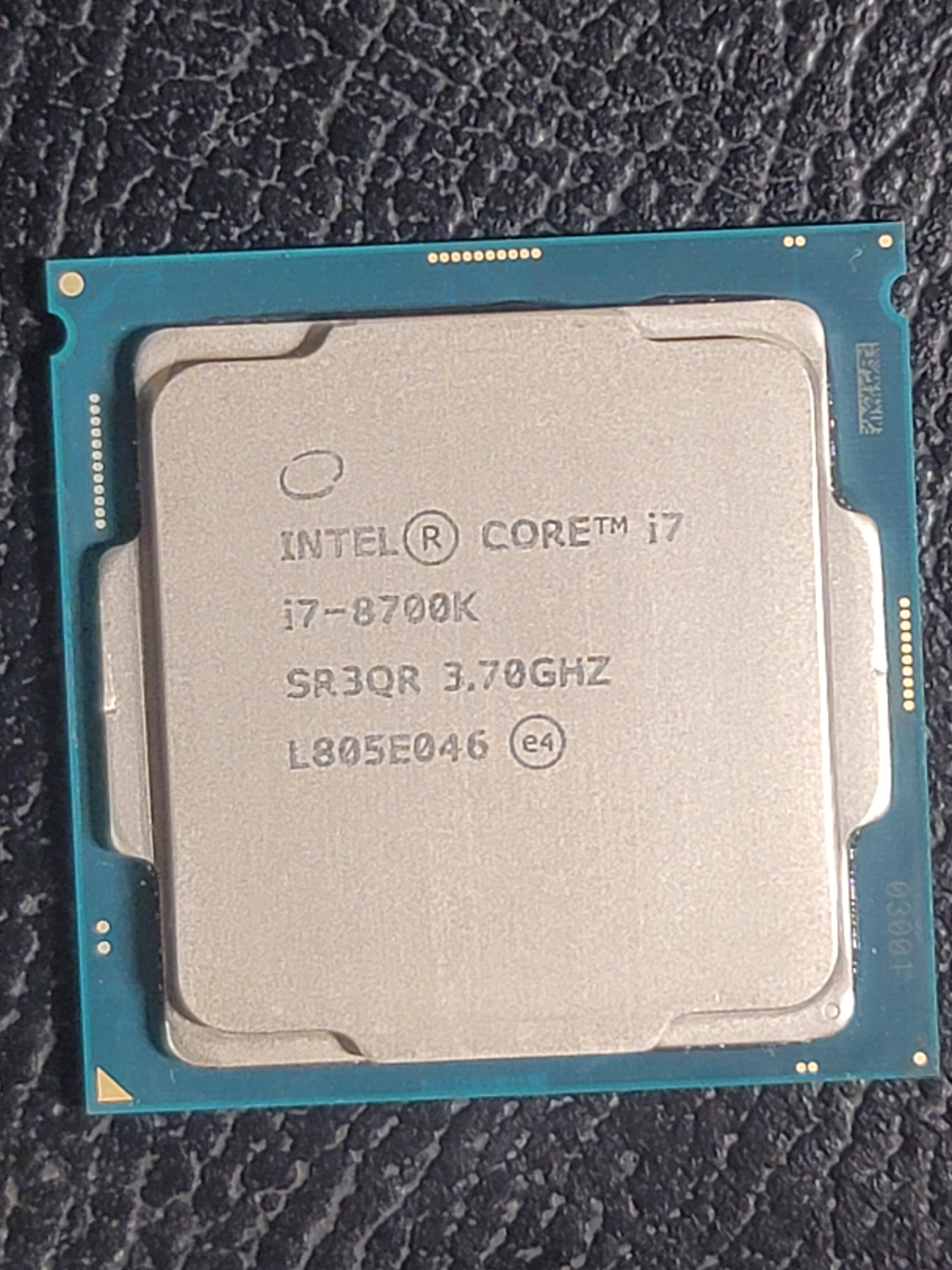 CPU Bottom(just in case if needed): 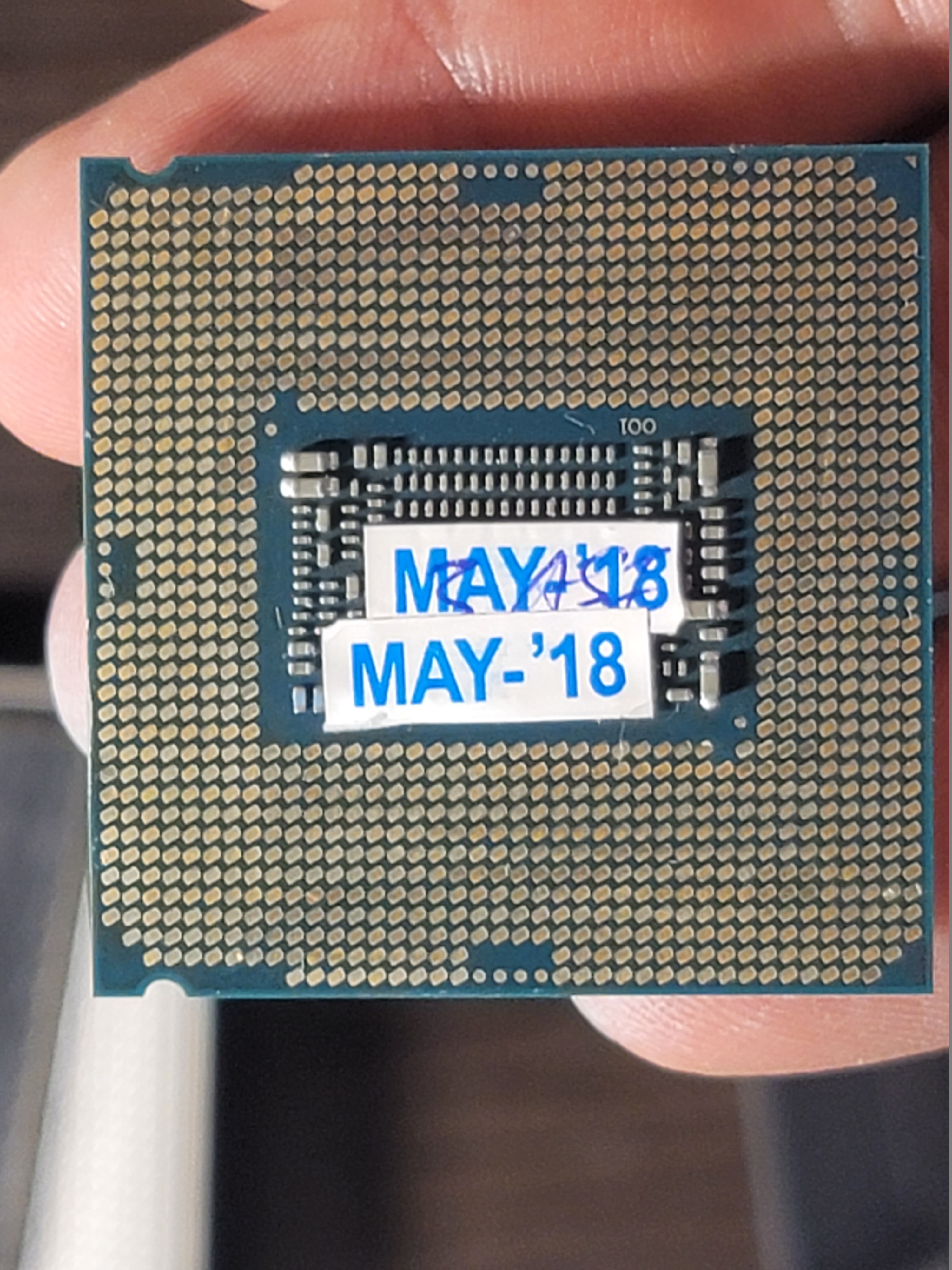 @iAndrew5 - Thanks for confirmation. Once you ran WMESet that should have disabled ME FW (confirmed by fans running at full speed), so you should have been able to proceed there, instead of turning off system. Did you try, or did you just immediately shut it down?
Can you please put all that into a single max compressed zip or 7zip - thanks. Do you want to try with the old CPU first, or go ahead and trust that the new CPU will be OK and bootable?
It may be fine to use either, not sure yet, until I can look at BIOS and confirm that the new BIOS is also compatible with your old CPU (U0 - 906EA)

What is the chipset of this system? And, did Eurocom tell you for sure that 9900K would run with that BIOS, or did they say "Here, you can try"
Also, since you are crossflashing other brand BIOS here, do both models get sold with the same GPU? If not, then you may not be able to crossflash like that.

@Lost_N_BIOS Thank you for your answer. Here are the details:

Q: Once you ran WMESet that should have disabled ME FW (confirmed by fans running at full speed), so you should have been able to proceed there, instead of turning off system. Did you try, or did you just immediately shut it down?
A: I just closed windows terminal immediately, then shutdown my Windows PC.

Q: Can you please put all that into a single max compressed zip or 7zip - thanks.
A: Here us the link to ZIP with all the files: https://drive.google.com/file/d/1eVaoJyF…iew?usp=sharing

Q: Do you want to try with the old CPU first, or go ahead and trust that the new CPU will be OK and bootable?
It may be fine to use either, not sure yet, until I can look at BIOS and confirm that the new BIOS is also compatible with your old CPU (U0 - 906EA)
A: I have to use old CPU i7 8700K as I have returned a new one to the shop( until PC get back alive. I will buy it again)

Q: Also, since you are crossflashing other brand BIOS here, do both models get sold with the same GPU? If not, then you may not be able to crossflash like that.
A: They usually are sold as constructor. So you have a choice which CPU, GPU and how much memory do they install. My configuration was NVIDIA GeForce 1070 8Gb.

Note: also Eurocom says that their benefit is Unlocked BIOS with overclocking support for maximum performance with “K” series of Intel 8xxxK processors up to 9900KS

@iAndrew5 - Thanks, I have to run for now, will get into this tonight for you!
The bricking likely occurred once you shut down without reflashing BIOS, due to new EC FW and old BIOS + branding mis-match then as well may cause issues too.

Hi @Lost_N_BIOS . Hope you are well. Did you have possibility to compare the BIOSes from Dream Pro & CH341A if they are equal? Also you wanted to compare the initial BIOS backup with the one provided by Eurocom. Did you have a chance?
Can I flash it safely or it is required to inject some data from my BIOS backup to the BIOS by Eurocom before Flashing?
Can you lead me or link to the manual how to do it. I will try to do it myself.
Thanks in advance.

@iAndrew5 - Sorry for the delayed reply!! Stock BIOS from Eurocom will work with either 8700K/9900K (906EA/906EC), since you have the Eurocom EC FW in there, best to now program in the matching BIOS.
For your dumps, MX25L6473F - both match from DreamPro and 1.40, so both can read from this chip OK. If write fails with DreamPro use 1.4 instead as I know it’s confirmed working by many
For 25Q80DV both dumps DO NOT match. But, I am not 100% sure what can write to this chip safely, but you should not need to write to it anyway, since EC FW update went in OK current contents should be OK

I do not see any user/system specific data (no serial, UUID, LAN etc) in the dumped BIOS that would be relevant to transfer over, so you should have no issues with direct program in of the Eurocom BIOS

Hi, @Lost_N_BIOS
I have sent my laptop to the service. Almost one month passed.
They can’t do anything.
They have flashed the BIOS.
They have replaced the socket 1151(they said it was damaged)
But the screen is still black…
They said that POST checks are not passed.
And they can’t find out where is the failure.
Is it somehow possible to find out what is POST #19 related to?

I have lost any hope…