Hello, I have an Dell G5 5587, chipset HM370, BIOS 1.11.1. I already managed to dump full BIOS chip via unlocked FD. However I noticed that Boot Guard features is enabled (see MeInfo pic attached). The list of task I want to do with this BIOS modification:
+Change BIOS settings, hidden one to be precise
+Update GOPDriver and its associated VBT/VBIOS
+Update microcode
+Update RAID Driver/RST
+Update ME FW/PMC
I dont have much experience around this, so I want to ask which task above I can do using the posted guides here without hassle, especially with Boot Guard enabled by default on my PC. About ME FW update, I know I can do it myself but Im afraid to do that, because I want to retain all the default stock settings while only want to update the FW and perhaps change some settings (like BCLK OC…), I tried to play with FIT but dont have much trust in it. Attached are MeInfo pic and my BIOS full dump (BIOS, ME, FD regions, edited to remove my serial number), i splitted the dump into 2 part ZIP due to forum limitation, please rename dellg5.jpg into dellg5.z01, then you can unpack it with main dellg5.zip file . Dell BIOS: Dell
If anyone can point me to the right direction or can modify the BIOS to my request, then I would be grateful. Thank you.

-------------
Update: I was able to cook an ME image from FIT to update mine, works okay. So now I only need how to edit ME settings via FIT but retains the original settings. 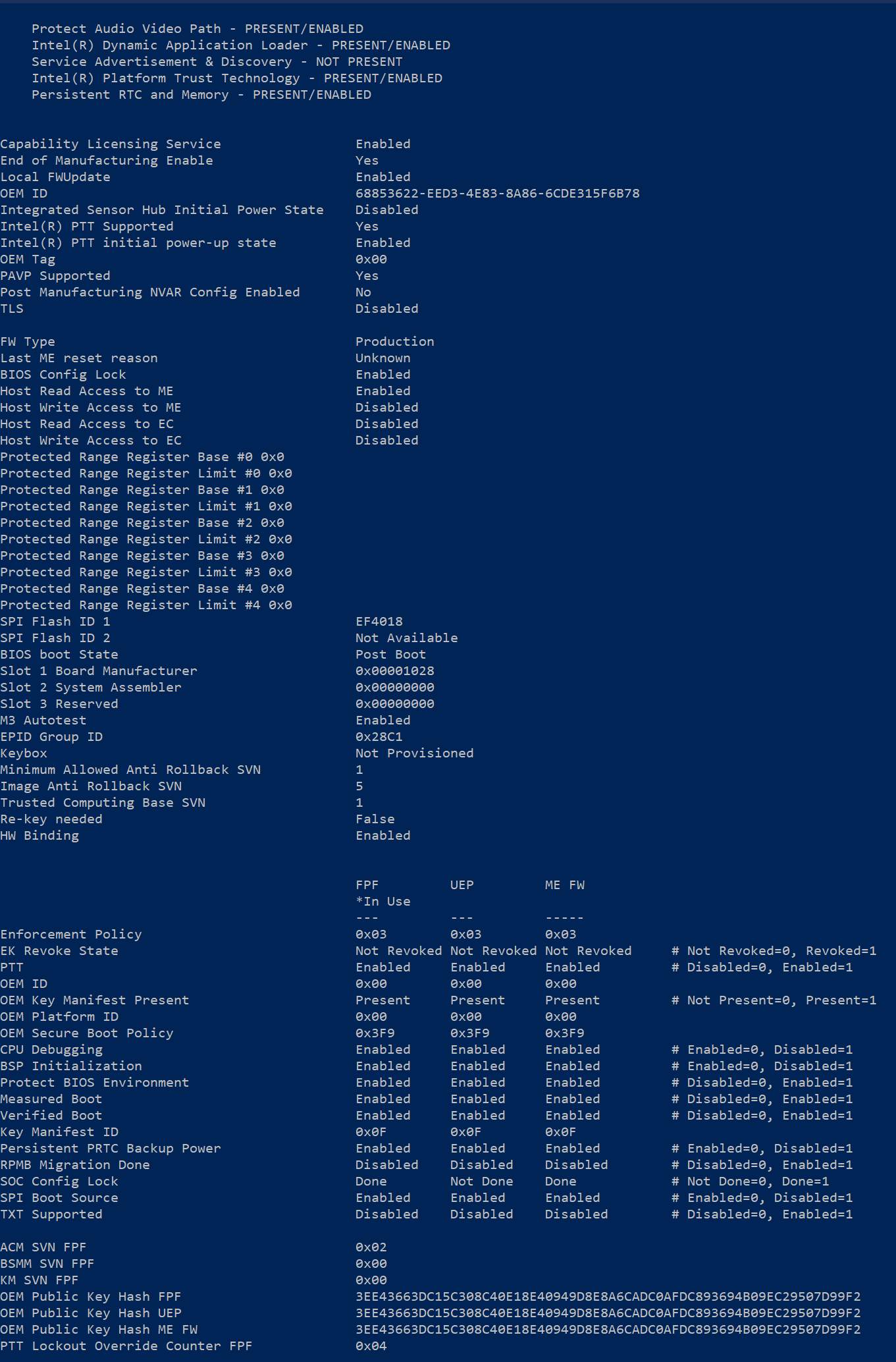 @hp300 - You “Cooked” an ME FW image via FIT, but did not retain original settings? If not, then how did you “Cook” It? Sounds bad [smil2]
If your ME FW was originally in working order, not corrupted or failing to load, then all you had to do was update ME FW via the ME FW Update tool.

Since you’ve now put on some “Cooked-Up” ME FW, without retaining your original ME FW settings, it’s probably messing some stuff up.
To fix this, give me your original dumped BIOS from both chips if there is two chips (Is that what’s attached above?) If yes, please re-attach new one, without you editing it, I don’t care about your serial and no one else does either, but I don’t want some edited file that may brick later and then we don’t know if due to your edit or mine.
Here, upload to one of these sites, then you can delete once I tell you I downloaded it (they both give you delete links after upload, or you can time limit before gone at uploadfiles) http://tinyupload.com/ Or https://uploadfiles.io/

I can help with
+Change BIOS settings, hidden one to be precise << Possibly, you never specified what setting you want to make visible.
+Update microcode
+Update ME FW/PMC