[HELP/REQUEST] Is it possible to disable HPET somehow? There is no BIOS option, yet AMIBCP shows a value for it in a hidden section

If I were to flick those two values ‘Failsafe’ & ‘Optimal’ to False would that achieve what I desire? I expect it is not as simple as that though… 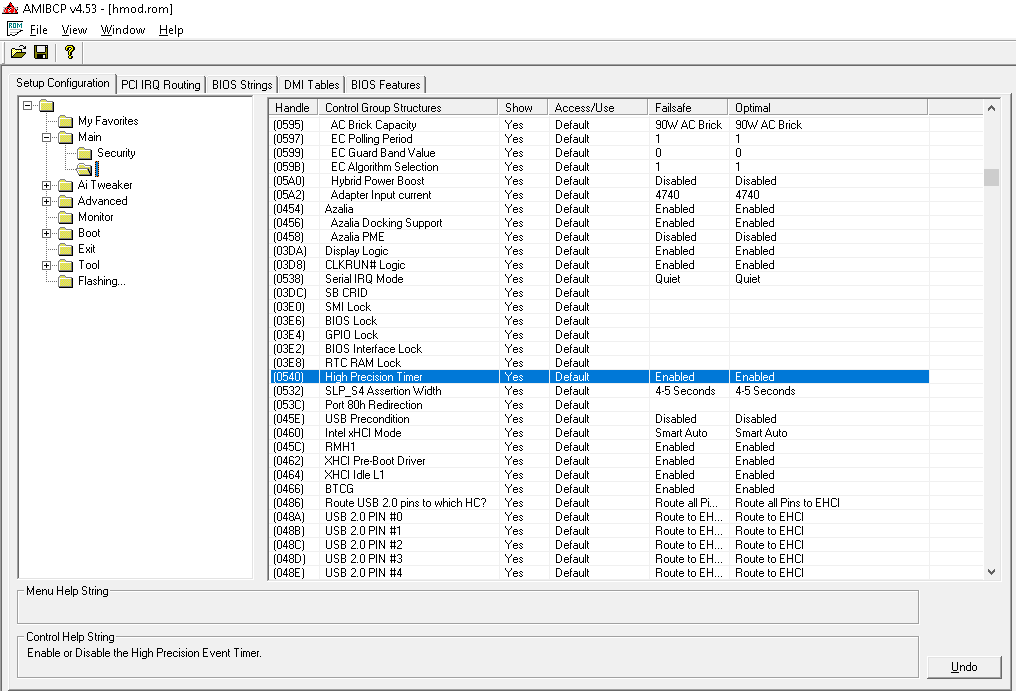 Any guidance/help would be greatly appreciated as to how I could go about this if I can’t simply change the default value, save and flash.

Yes, that may/should work! But, if you have not changed anything with that tool, be ready for recovery in case it gives corrupted BIOS flash after changing a setting.
Sometimes that happens, if it does you can recover via USB Flashback with BIOS on root of USB named w/ the recovery name (Z87PL.CAP). Sometimes you may need to try 4-5 cheap small USB Sticks before you find one that works, w/ LED is best so you can see action taking place.

I tested making those changes, and BIOS looks OK afterwards, but that’s just a best guess look using a few apps to reopen after the mod.
There is newer version AMIBCP, that is what I would use. Version 4.55.0070

Or, you can modify the setup module by extracting with MMTool, edit and then replace. I will do this for now, in case above method does not work


*Edit - I tested and found that changing those values and saving/opening only leaves them changed in AMIBCP, not in the actual BIOS itself.
The setting will still be default enabled after change in AMIBCP, even though it shows disabled in AMIBCP after edit, this can be verified with setup extraction and IFR output

Don’t use MMTool for the mod itself, you can use it to extract and view the setup module and IFR if you want, but do not modify the files from it, waste of time and wont insert.
To properly do this mod, use UEFITool for the extraction and insertion, but only as outlined in the mod files folder included below.

Here’s how to do this mod, files included to show you also, in case you wanted to learn a little bit today 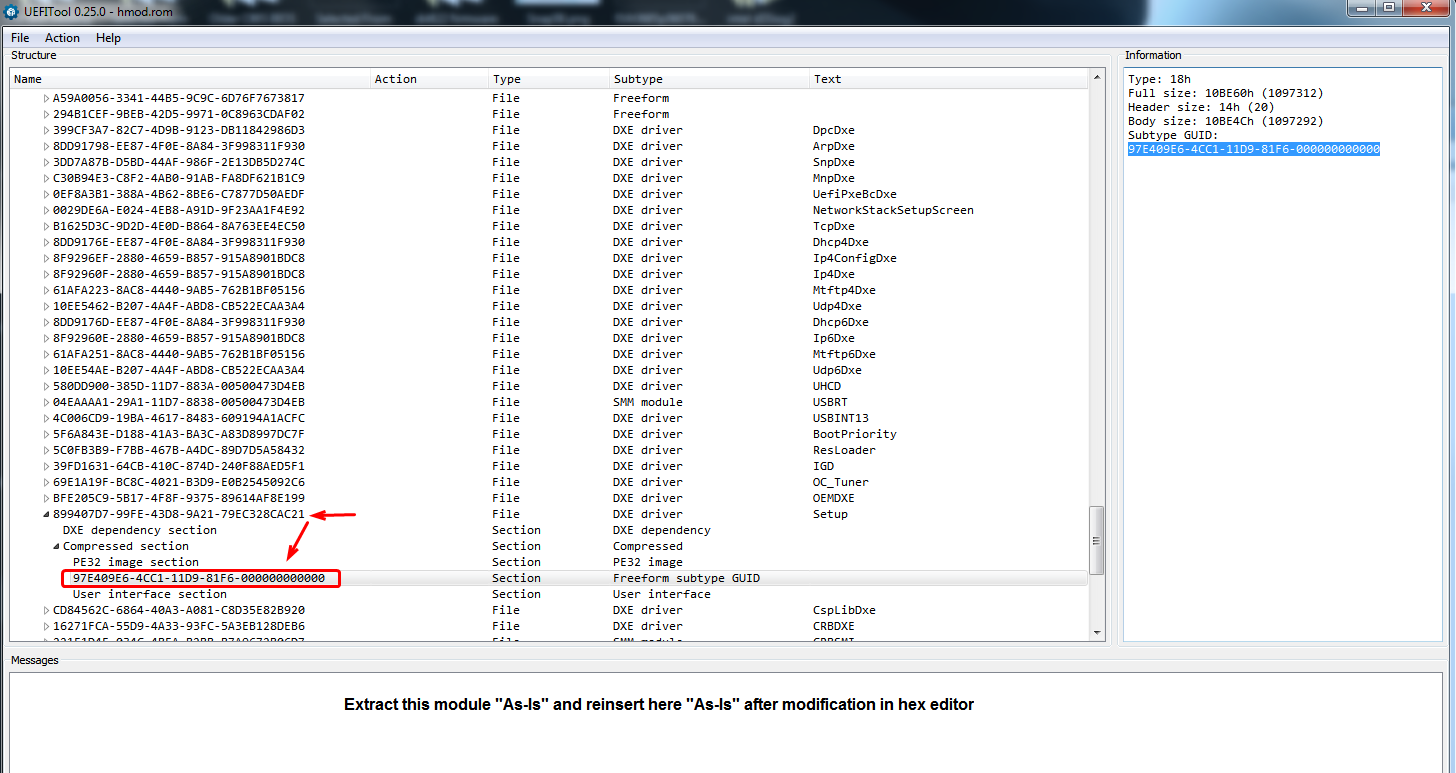 Extract and insert only With UEFITool, this particular “setup” BIOS mod cannot be edited and reinserted properly with MMTool

Wow thank you so much! A hand-tailored comprehensive solution and tutorial complete with testing and pictures. Cheers!!

What is the purpose of that?
Modern Windows do not use HPET by default (as an implementation of QueryPerformanceCounter function at least).

What is the purpose of that?
Modern Windows do not use HPET by default (as an implementation of QueryPerformanceCounter function at least).

I’m not sure really, it doesn’t seem to have had any effect which was probably to be expected, QueryPerformanceFrequency remains at same value. There was in the past some conjecture/anecdote regarding the frames per second (games, video benchmarks) benefits of forcibly enabling HPET via Windows, apparently some experienced improvements and many others noticeable declines in video performance. Ultimately it seemed to be agreed (amongst much snakeoil) that HPET isn’t an optimal timer for consumers and shouldn’t be forced on due to performance degradation and input lag/DPC latency. However, people seemed to suggest that enabling/disabling HPET in BIOS would affect the default timers used by Windows and that having it enabled in BIOS (such as in my case) would lead to an inferior and different timer configuration than with HPET in BIOS disabled. Probably hogwash, but I like my PC performance superstition.

You’re welcome @Shrib - I was wondering too, why disable? Thanks for the explanation, someone else requested similar mod in the past day or two as well, maybe you guys were discussing together in another forum
Accessing Locked BIOS Menu Settings

I wonder if there is some other actual way to check enabled or disabled from windows, maybe in power shell or something? I assume the mod I did above actually sets it to disabled as it appears, but it would be great to somehow confirm once in windows.
I found this, and it seems like it says HPET disabled or enabled in the BIOS may not matter to certain apps, windows might use some other similar counter that can hurt performance.
https://www.ghacks.net/2013/04/18/try-ch…cs-performance/

and this - https://www.reddit.com/r/Overwatch/comme…se_performance/
Maybe this would confirm BIOS Disabled? If it’s not there? I’d have to test to confirm that, only a guess