I stumbled over this forum because we have here two HP 8200 USDT with a Sandy Bridge i3-2120 (CPUID 206A7) processor, which we would like to update with an Ivy Bridge i5-3570K (CPUID 306A9). The Q67 chipset should in theory support Ivy Bridge CPUs but HP obviously never updated the BIOS to support Ivy Bridge, since they wanted to sell HP 8300 series (running on Ivy Bridges with the Q77 chipset).
I searched the net now for 2 days and it seems quite a lot of people would like to boost their old machines with Ivy Bridge CPUs. So my thought was to mod the BIOS.

Do you see “HP Surestart” anywhere in your BIOS? If yes, this is not possible to flash in editing BIOS. If it’s not shown in your BIOS, and you don’t see it mentioned in the overview or specs for your system then you can do this.

However, you might also need to update Intel ME, and if they did not update Intel ME to V8 it may not work. We can test without ME8 though, if ME7 is still in that BIOS (you can check with ME Analyzer)
To answer your question, yes it is that easy if that tool is correct one for your BIOS. Did BIOS look OK after save, close app, open again and load the edited BIOS, where all the CPU dates and versions shown correctly? If yes, then it’s probably good to go

I will check BIOS myself here in a bit for ME version. Do you have flash programmer? If not, you may have to wrestle through a few methods to try and flash the modified BIOS.

I checked this BIOS (https://ftp.hp.com/pub/softpaq/sp88501-89000/sp88541.exe) ME is still 7.1, so if ME8 is required on your chipset for Ivy then this will not be possible until HP put’s out BIOS update with ME8
I also checked inserting microcode with the version you mentioned, all OK! So you can test that BIOS if you want, should be fine if it will let you flash.
If flash goes OK, but wont boot with Ivy, but will with Sandy, then you know ME8 is required for your chipset/Ivy

thanks for your fast reply and your support and sorry for my late answer!

- There was nothing like “HP surestart”.
- We updated Intel ME firmware to the latest on the website available version, which is 7.1.91.3272
- We updated to BIOS version v2.28
- The added microcode was succesfully stored in the BIOS - it was showed correctly upon reopening the “modded” BIOS-file

- I have no specific “flash programmer”. I assumed that I just mod the BIOS and then I use the flash-option within the BIOS to flash the new (modded) BIOS. My worries are about a certain checksum?
As I stated above, we updated only to v2.28 so far. There would be version v2.29, v2.31 and v2.32 available, whereas v2.32 only got the spectre-microcode-update. And because of this fact, my last thought was, if we should manipulate just the v2.31 to have an “escape”-option with the V2.32 (I don’t know if you can flash to the very same (but unmodded) version, if the modding failed?)

You wrote that “…it’s not possible until HP puts out BIOS update with ME 8”. This implies, that it’s not a hardware problem. The latest BIOS could also be updated/modded with ME 8?

So if no other suggestions come by someone else, I try to flash the BIOS with the mini-mod I listed in my first posting and we see what happenes.

Thank you so far!

P.S.: i guess that would be great for many many others, since there are so many other HP 8200 models around. There can be find a lot of postings/questions concerning exactly this topic.

You’re welcome, and no problem with not instantly replying, we’re all busy it’s OK

How did you insert the microcode? Checksum, if it matters, would be fixed by many tools usually

I would update to very latest BIOS version, if you want best chance of being compatible, and possibly having ME8 already (Check latest BIOS with ME analyzer and see if ME8). BUt you can wait until more info is known.
There is always many changes in BIOS updates vs the little change logs they give you, so “Spectre-Microcode” is not all that put into that one BIOS for example, just the main fix everyone was worried about is mentioned.
If you want to avoid spectre updates, then check one older like you mentioned, really I’d check them both to see if ME8 is there or not.

No, ME8 may not be required, but at same time possibly is required for Ivy support (I am uncertain). If none of your BIOS contain ME8, then you cannot put/update ME8 in there, only ME7.
And if ME8 is required for Ivy and your chipset, then you will not be able to do anything to get it to work until HP puts out BIOS with ME8 already in it

Yes, you can flash mod version, then non-mod same version, depending on how you flash you may need to edit some ini config file or uncheck a box/check a box to allow same version etc.

Tell me once you check, is ME8 included in latest BIOS (I checked SP88541.exe already above, still ME7)?

I asked about flash programmer because often if you mod BIOS stock flashing program will not work due to signature/security checks, and you may need to find non-OEM version of the same tool (or use flash programmer)

This time a bit faster

- I inserted the microcode as stated in my initial posting (see there steps 1 - 4)
- Hmmm, why should they do the work to do BIOS changes, but not savour them in the changes.txt? Investing time but not mentioning it doesn’t make sense - your boss should know, what you’ve achieved and what you get paid for!

- as stated, we did the latest BIOS-updates via BIOS itself (jump with F10 in the BIOS and use there the Flash Option to flash the XYZ.bin flie from USB stick)
- Just to not mess up: “flash programmer” is a general term for all flashing tools, the tool to flash AMI-BIOS, a really specific software, or a hardware tool for BIOS-chips?

ME analyzer has the following 5 hits on Virustotal.com:

Here are the results of ME Analyzer as attachment!

I have no clue how to interpet these result, since we updated the firmware already successfully to 7.1.91.3272 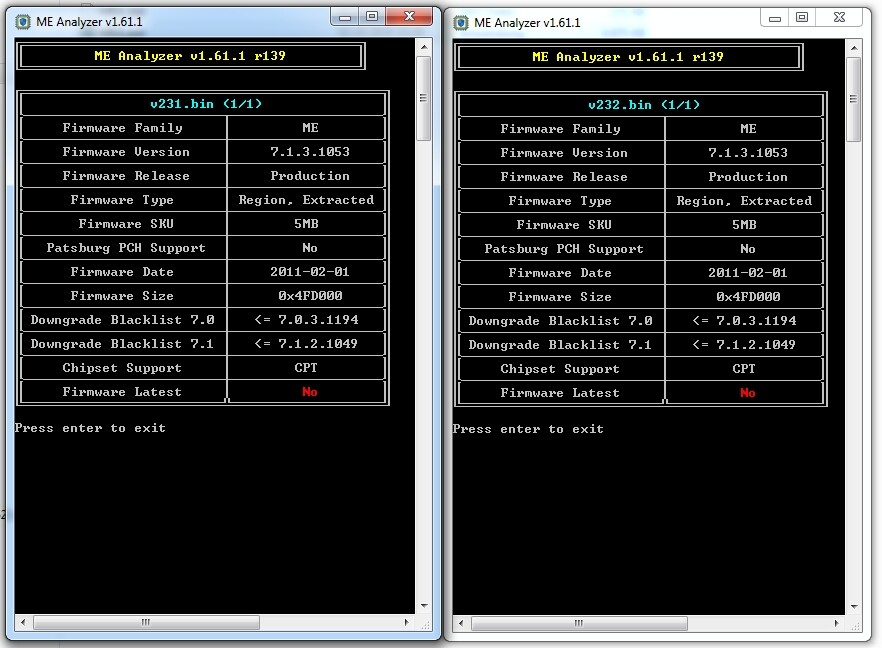 Thanks for the rehash, sorry I didn’t look back at post one again and see you mentioned how you did the microcode. So, after this mod, does all microcodes still show up in CPU tab with correct dates and revision numbers? If yes, then that should be OK

Manufactures often make 20-100 changes (not always that many, but lots usually), bug fixes, enhacements, security changes, etc in BIOS releases and then sometimes only put a few (1-3) changes mentioned in change log.
Very rarely will you see a complete full detailed change log. Lazy is the reason why

The boss knows, he gets full change log internally, and I’m sure it’s kept in a folder with the BIOS updates as they make them too.

No flash programmer is a specific term, meant in general for a hardware flash programmer (Like $3 CH341A, or EZP2010 or EZP2013). When talking BIOS mods, people always mean this when they mention flash programmer or SPI programmer etc.
If software is meant, it would be mention by name, or generally BIOS flashing software/program etc.

Those ME images mean in those BIOS files you dropped on the ME Analyzer, that is the ME version inside the BIOS files (7.1.3.1053)

Did you test your mod BIOS yet with microcode added? If not, go ahead and test, with SB CPU first, then if booting OK test with the Ivy CPU.

I forgot to mention, vBIOS may also need updated if using internal graphics device (onboard graphics)

Hi and thanks again for your efforts!

You can go ahead and test, but with SB CPU, this way you see if you’re going to run into a BIOS flashing problem too with mod BIOS.

Or you can, if you do it, follow the guide here - [Guide] Transfer of specific Intel VBIOS settings by using Intels BMP tool
If you don’t do, I will get to this tomorrow for you.

I’m pretty sure the ME7 needing to be ME8 will hold this back no matter what, everything I can find say for Q67 ME8 is required for Ivy support, some P67/H67 was possibly OK on ME7, but we can try and see what happens with ME7.
Nothing bad can come, I mean from us updating microcode and vBIOS, it will be OK with SB no matter what, so you can leave as is in the end if Iy does not work, or you can flash back to non-mod BIOS.

hi did you get this working? as im in the same boat

What is the method to flash modified BIOS to HP 8200 ?