I have bought 4 brand new WD elements for a great price. They far exceed my need for storage but even taking into account losing half to raid 10. I have followed videos and read the manual and seen forum posts but its been hard work so far. I have successfully created the raid array but I don’t trust windows not to throw a hissy fit if I try to install the RAID drivers without actually being in rair mode. I can’t boot into windows in raid mode (so that I can install driverXpert). So I’m in AHDI mode and I have cloned my OS to my second SSD and I am using freefilesync to sync back my data (lost on clone).

As I say I have created the array of 64KB stipe and 28TB raid 10 over 4 disks but will windows 10 let me install drivers without having a visible raid array? I currently have storeMI drivers in the device manager next to my storage controllers. I have 2 hours before my data is back in place. I think this raid 10 will give much better performance than my current SSDs. I’m getting 220MB/s from a single disk and for read that is quadrupled (with read caching on).

@megatron :
Yes, to be able to get access to your AMD RAID array, you have to set the AMD SATA Controller to "RAID" mode. It would have been a good idea to do it before going to install the OS.
By the way - compared to a single HDD/SSD the performance of your RAID array may be quadrupled, if you read/write big sized files, but not if you use it for "normal" PC tasks, when mainly very short sized files are processed. The 4KB scores will not even be doubled.

I came across this post, it has some substance. I still have 2hrs 30min before my files are restored to my secondary SSD from my backup. I will then test (after I use macrium to make a backup of my OS on my secondary SSD).

Edit:
Should I run WD alignment on my disks (empty)(see attachment)? 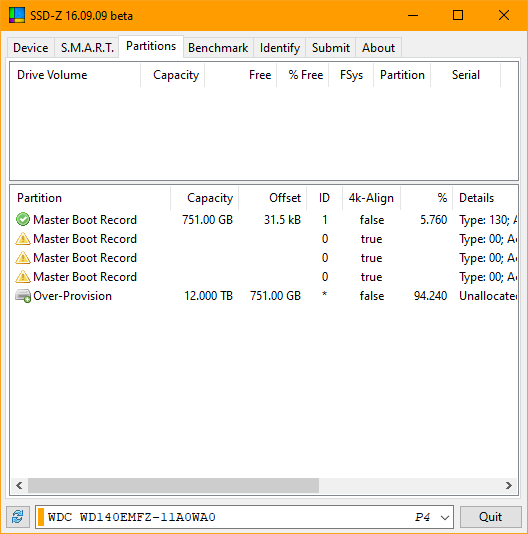 According to this thread its simple to create a partition (which I can then clone to an SSD & hopefully boot from that in raid mode):
https://community.spiceworks.com/topic/1…g-raid-10-array
As a bonus I can get my OS all sorted out and leave it defragging overnight and have a fully defragged copy on my SSD (I know they say it doesn’t matter with SSD but still). 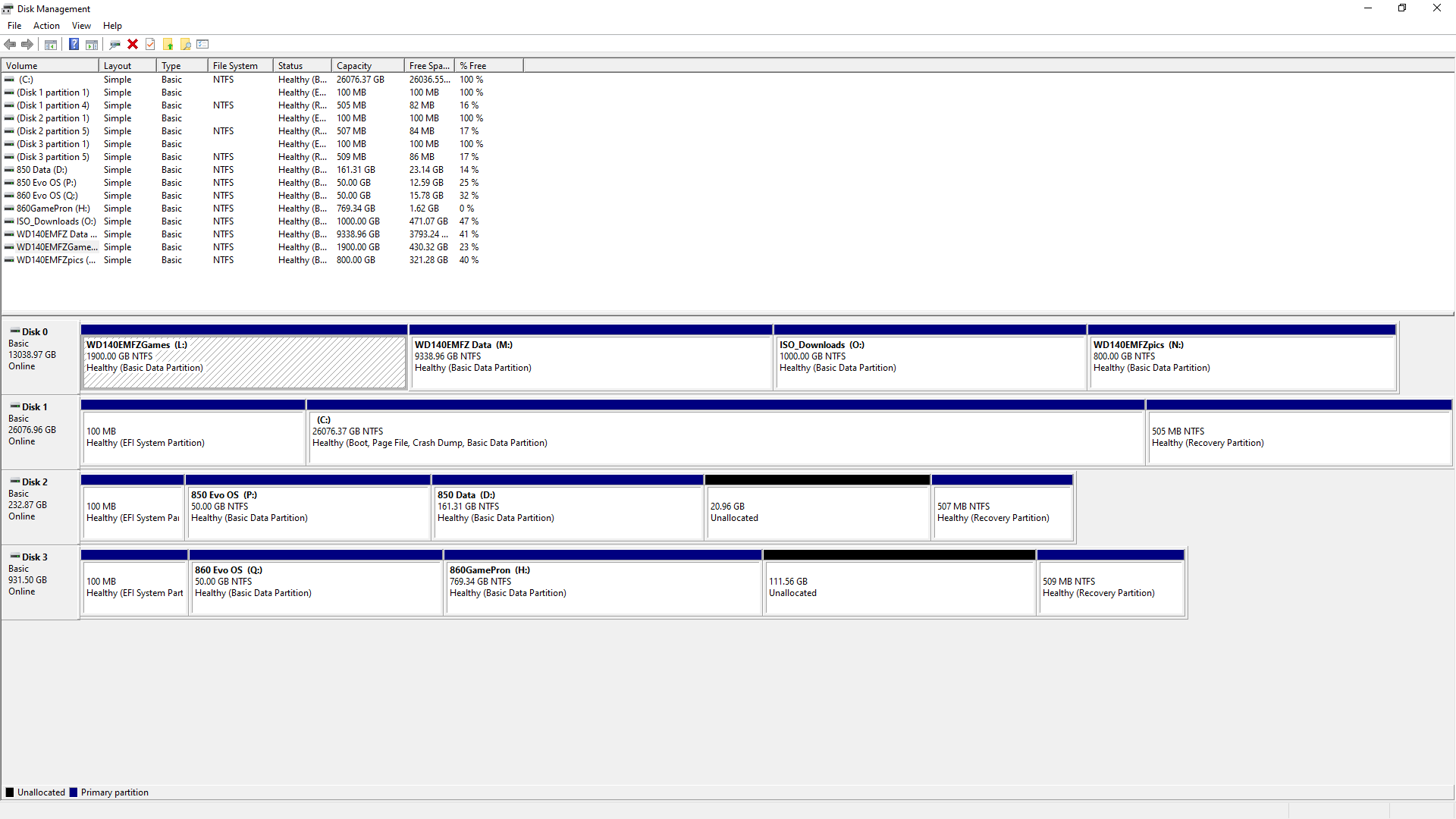 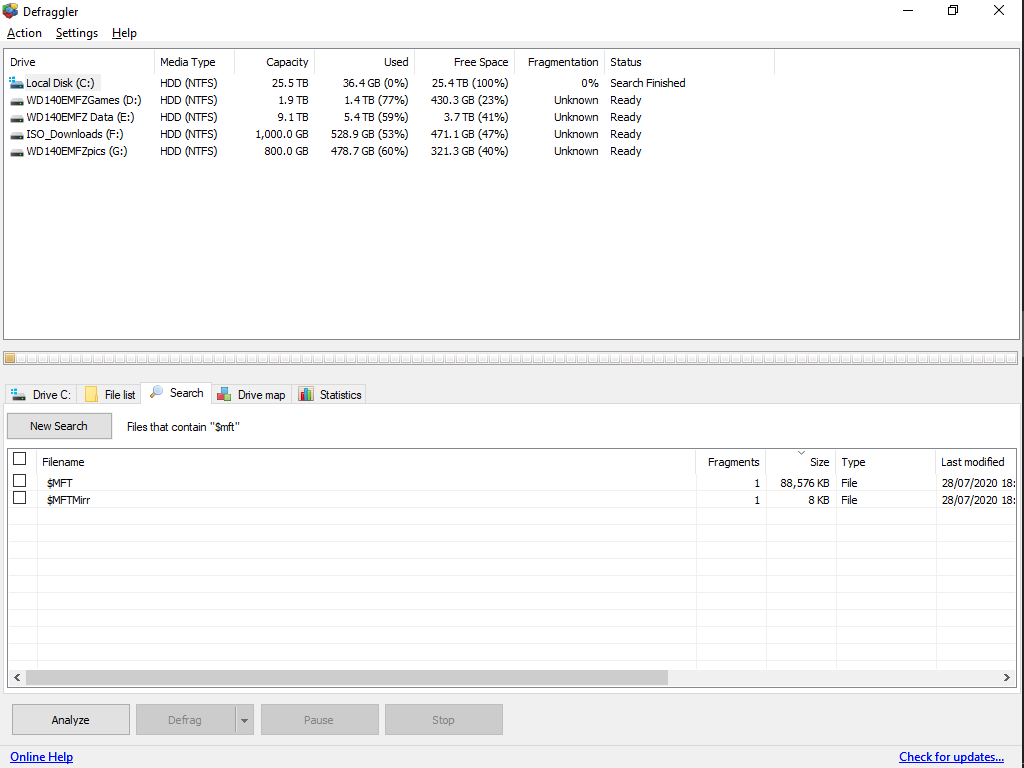 @megatron :
What you are doing doesn’t make any sense for me. It would be much better (and safer) to install the OS and the boot sector onto a single SSD and to have the 28TB sized RAID array outside of the system drive.

@Fernando
That was the plan, but I could not boot my SSD while I was in RAID mode. Now that I have installed windows on RAID10 I have successfully transfered a copy to cold storage and now I have installed AMD RaidXpert2 hoping it would improve performance. Right now I am defragging (with defraggler) a 31GB/50GB RAID 10 OS partition, it will take 7 hours (edit: it took much less than that) but a normal drive with this kind of workload would take just as long or perhaps longer. I have just seen 80MB/s simultaneous read/write and that is a first, I think its usually 30MB/s (but right now its 0.51MB/s). I have not done any large file copys yet (from another external 14TB elements).

I was using minitool partition manager to create a series of partition which would have near enough emulated my old hard drives (to keep my software from falling apart), but I was presented with options which I did not recognise. I knew I had set a 64KB stripe but it was talking about cluster size (I can’t get the same dialong now). 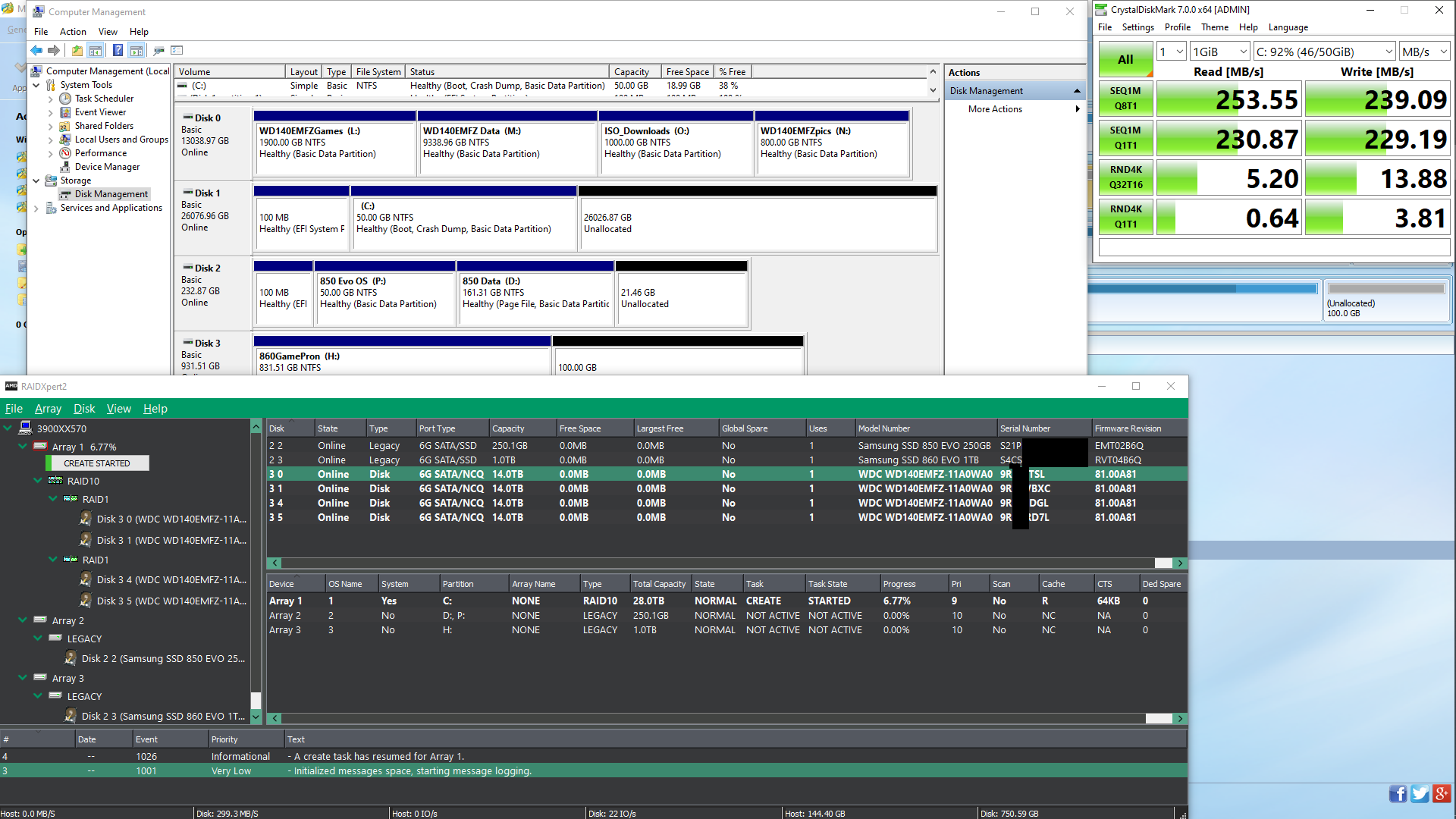 What I wanted to know is if I can optimise the array somehow before I commit my data (assuming optimisation needs to be done on creation of my partitions). I’ve already set my stripe to default (64KB) which will double the space used for the total of small files on the disks; something like 8GB instead of 4GB (a tradeoff for more permance in larger filetransfers).

Trying to wade through this a bit:
https://drivers.amd.com/relnotes/amd-rai…_user_guide.pdf


I have some more data here:

I usually stick to crystal disk mark but it doesn’t show the difference in speed over time which can help with checking for issues.


I’ve got some screenshots here with my thoughts about each one on imgur:

Here are some screenshots from somebody else’s Raid 10 from 2013: 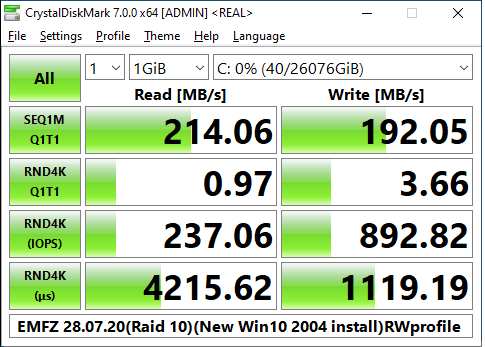 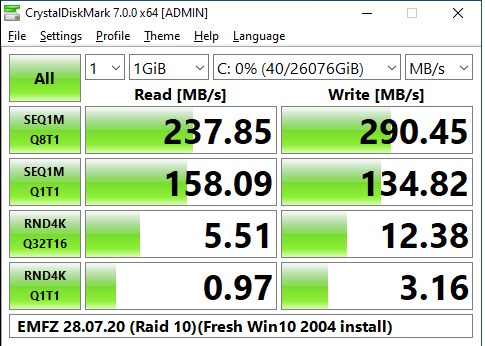 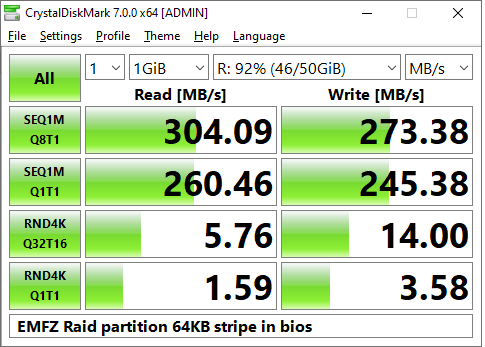 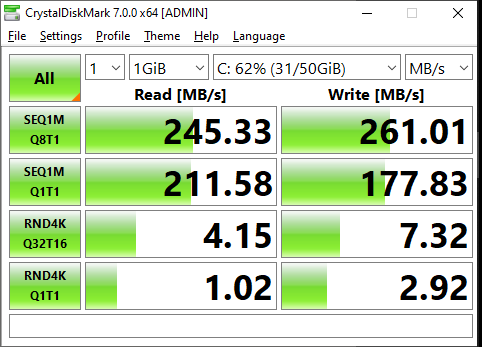 Someone told me that the onboard cache is disabled when you do raid (500MB for these EMFZ); this is why performance is bad. I either need to get a UPS [and enable write caching in bios] or just use the disks with freefilesync. I don’t need to raid but I still want to test it and need to make a backup to USB stick. I’m almost there with clonezilla. I don’t know the filesystem of the 16MB hidden partition on windows 10 install.

Someone told me that the onboard cache is disabled when you do raid (500MB for these EMFZ); this is why performance is bad.

If this should be true, nobody would have a performance gain by using a RAID0 array instead of a single (non-RAIDed) SSD/HDD.

I don’t know the filesystem of the 16MB hidden partition on windows 10 install.

You can find the answer >here<. It is an additional hidden partition, which has been created by the Win10 Setup, if the GUID Partition Table (GPT) has been chosen by the user. This is what Microsoft has written:

I gave up trying to install a live OS on a USB stick, I put my internal SSD into an external 2.5in ssd enclosure and used Macrium reflect. I was away for a week and when I came back my monitor C24FG73 Samsung had died, and the array was offline. I hooked up a backup Samsung, now I am typing on a Fi27Q-P Gigabyte. The array was not only offline but had “failed”, I rebooted into windows 10 from the external, and upon reboot the array was back. I have now installed RaidXpert2 with the latest drivers from AMD, and I have done a full scan (took more than 2 days) of the 28TB RAID10. It seems like its going ok now, the performance is deceptive, when I use freefilesync the array always finishes before the external drives (14, 8 & 4TB) have, and it contains the primary copy of the data which is on the 14TB & another copy on the 8+4TB.

After installing the raidxpert2 software I notice that I have only 3 drive temperatures available in HWiNFO, completely misses both SSD temps and only shows 1 of the 4 raid 10 drive’s temperatures.

Oh and in regards to the topic title, I did a fresh install. Right now I have both SSDs as array 2 & 3 whereas before they showed up as legacy drives in raidexpert2. I think I made this change when I got my UPS.