Since I have installed Windows on my new NVMe SSD all the drives connected to the Intel controller (in raid mode) disappear after some time.
They even disappear from device manager. Scanning for new hardware in device manager does nothing. The RST console crashes everytime
this happens and I try to update the devices within the console.

Since there are only a very few Forum members with a hardware configuration like you, it is not easy to help you.
I suspect, that it is impossible with your board/chipset to run simultaneously a PCIe connected SSD with NVMe support and Intel SATA port connected drives, which are running in RAID mode.
Off topic:
Since your chosen thread is not very meaningful, I recommend to rename it to "Are PCIe connected NVMe-SSDs compatible with an Intel RAID system?" or similar.

Further investigation revealed, that “Ultra fast boot mode” caused this issue. I thought the drives disappeared over time, but as soon as I set “Fast boot mode” to “Ultra fast” the drives are gone.
I think the combination RST RAID + NVMe + “Ultra fast boot” locks up the driver, because in the BIOS setup all drives are there (regardless of fast boot mode).
The driver from the Windows 8.1 installation media (RST 12.whatever) and version 13.6.3.1001 share this issue. Maybe version 14.whatever bring some improvement (only final version in combination with a matching RST EFI module).

If RST and RSTe RAID sets are compatible, I would test RSTe, too. But I’m afraid they are not and RSTe will destroy the data on my RST sets…

Since I have installed Windows on my new NVMe SSD all the drives connected to the Intel controller (in raid mode) disappear after some time.
They even disappear from device manager.

This doesn’t happen with my current Z97 system running Win10 x64 TP Build 10158 on the Intel 750 PCIe SSD. After having set the Intel SATA Controller to “RAID”, I can still see and use my 2TB HDD, which is connected to an Intel SATA3 port.

This doesn’t happen with my current Z97 system running Win10 x64 TP Build 10158 on the Intel 750 PCIe SSD. After having set the Intel SATA Controller to “RAID”, I can still see and use my 2TB HDD, which is connected to an Intel SATA3 port.

As you can read in my previous post it only happens with “Ultra fast boot mode”.
I thinks it’s the combination of hardware and software (X79, ASRock UEFI with inofficial NVMe support, Intel RST 13.5 UEFI and 13.6 driver, ultra fast boot mode,…).
Next step: downgrade to RST 12.9.

PS should I update to the latest Intel ME FW 8.1.x.xxxx?

The integration of NVMe modules doesn’t change anything, too.

I could update the Management Engine from version 8.1.40.1416 to 8.1.52.1496, but I don’t know how.
Flashing with the ME tools is not possible, because the firmware is locked.
Integrating in the BIOS is a bit harder. I can replace the ME/TXE region but the descriptor region shows this:

Since the NVMe SSD has a metal shield on the back the GPU cooler sometimes gets stuck on this thing.
And now the Ultra Fast boot problem...
I'm gonna send it back - if it is still possible...

EDIT: I still can configure raid volumes in BIOS if I set boot mode to Ultra Fast.
The RAID controller stops working if Windows is loaded. Crazy things are going on here...
Fernando July 9, 2015, 9:55am #7

@ mr_nuub:
1. Why is it so important for you to use the "Ultra Fast Boot" mode?
2. If you have a problem to get the Intel MEI Firmware updated, you should better post it into the Intel ME section of this Forum.

It’s so important, because I frequently attend LAN parties. Most people there judge the performance of a PC by the start up time.
I personally don’t feel any difference between the Intel SSD 750 and my Samsung SSD 840 Pro RAID-0 (2 disks).
Sequential read or write does never happen. At least not if you play games or write/compile code.

It’s so important, because I frequently attend LAN parties. Most people there judge the performance of a PC by the start up time.

If the boot time should be more important for you than the performance while working, it was not a good idea to purchase an Intel 750 PCIe SSD. As you can see >here<, this SSD natively has the longest boot time of all tested SSDs.

Primarily I purchased the SSD to test the compatibility with X79 chipsets, mod the BIOS and do some tests.
But ASRock forgot to remove the NVMe UEFI driver so I did not have to mod my BIOS.
At least it seems they forgot to remove it…

The boot time is not more important than the performance while working, I just feel no difference.
And I can’t see big differences in the benchmarks you posted.

@ mr_nuub:
If you insert a brandnew, PCIe connected and neither IDE nor AHCI/RAID supporting SSD like the Intel 750 SSD into an "old" X79 Chipset mainboard, you cannot expect a proper initialisation of the Storage Controllers after having chosen the "Ultra Fast Boot" option.
So for me your test results are absolutely normal and foreseeable.
By the way: My ASRock Z97 Extreme6 mainboard offers the "Ultra Fast Boot" as well, but I never used it again after having realized, that I was not even able to enter the UEFI BIOS by hitting F2 while booting.

And I can’t see big differences in the benchmarks you posted. 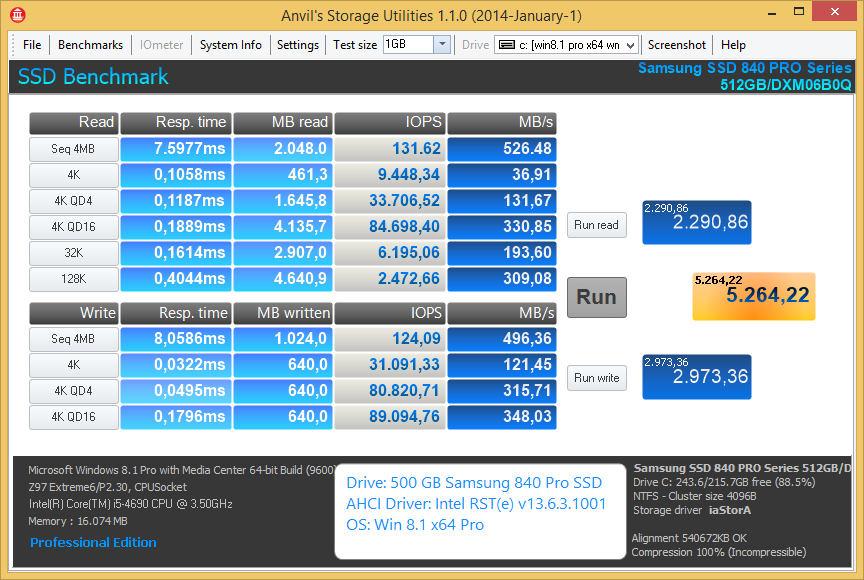 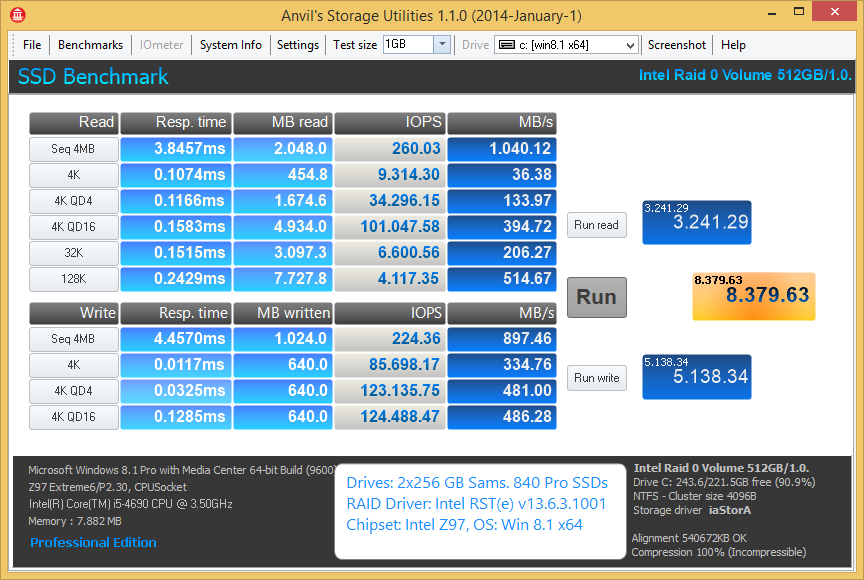 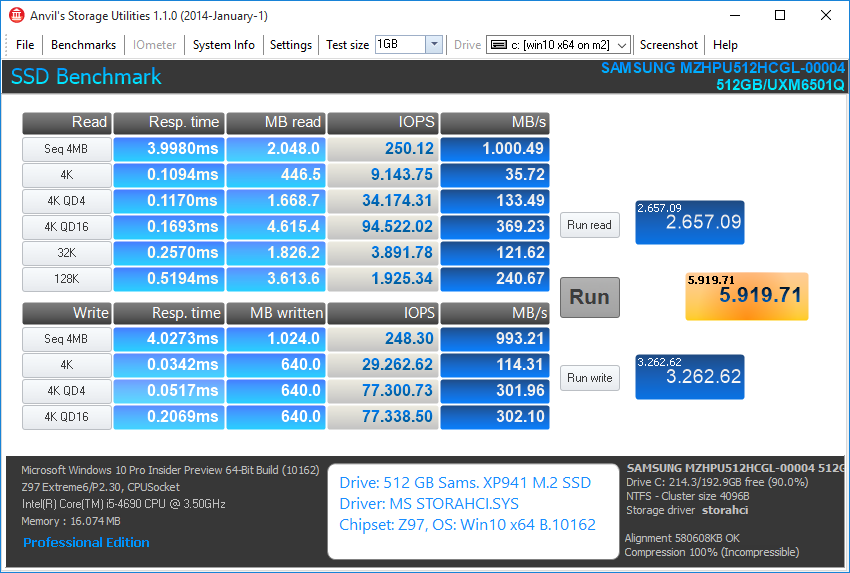 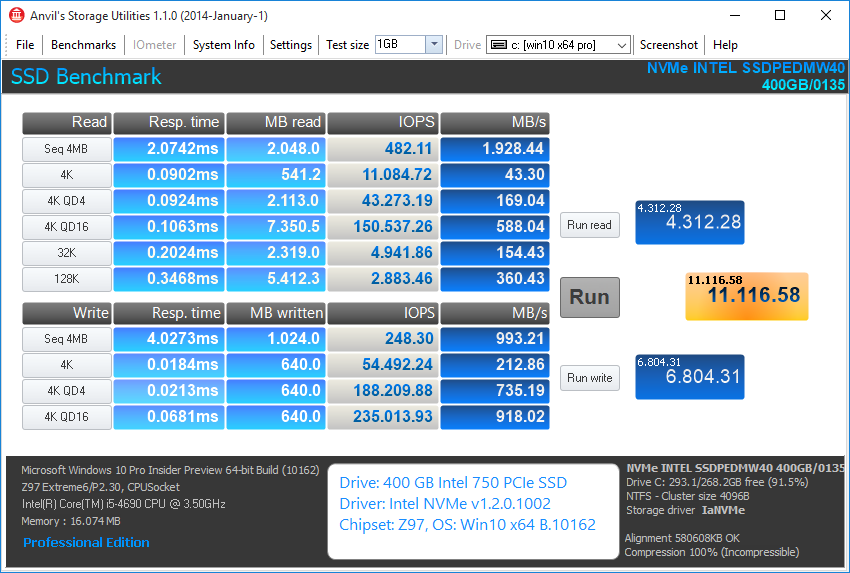 Do you see the differences?

As you can see >here<, this SSD natively has the longest boot time of all tested SSDs.

I meant the benchmarks here. Man…
I am sorry, I meant the load times of different programs/files. I do not move things around like the crazy cat lady throws cats around (Simpsons).

If you enable Ultra Fast boot mode, you have to use the Reboot to UEFI feature of Windows 8/8.1/10 (hold shilft while clicking on reboot → troubleshoot → advanced → UEFI setup).
However, the Intel SSD 750 in my system did never reach the 11.xxx.xx score as you did. The best I got was 9.6xx.xx.

I don’t even know how to read this scores. Are those just points to group the number? Or is it a grouping and a decimal comma?

@Fernando ,
I see you have got very great Anvil numbers with a W10 platform running on an Intel 750 SSD 400GB and x79 mboard platform.
This is a similar platform i am planning to build with a X99 mboard (DDR4) and a i7-5930K, but i hesitate about Intel 750 or Samsung PCIe solution.
Do you know if a Samsung XS1715 PCIe Gen 3.0 x4 NVMe should get a similar Anvil numbers or better ?

@ 100PIER:
Since your question has not much to do with the topic of this thread, I have copied your post and my reply into a new thread, which I just have started. You can find it >here<.

I see you have got very great Anvil numbers with a W10 platform running on an Intel 750 SSD 400GB and x79 mboard platform.

My mainboard has an Intel Z97 Chipset. I never used a system with an Intel Enterprise Edition Chipset (X58, X79 or X99).

Do you know if a Samsung XS1715 PCIe Gen 3.0 x4 NVMe should get a similar Anvil numbers or better ?

Since I never had access to a Samsung XS1715 NVMe PCIe Enterprise SSD, I cannot answer this question.

@ mr_nuub:
As you probably have realized, I have customized the thread and post titles. I hope, that this is ok for you. Otherwise you can change it again.
Furthermore I propose to move this thread into the "Solid State Drives" Sub-Forum, because meanwhile we all know, that your reported problems have not been caused by the Intel AHCI/RAID drivers.

What do you mean?

Both Intel 750 SSDs (the PCIe and the 2.5 inch one) will work fine with your system, but I am not sure, if the performance gain while your daily work will be worth the price of an Intel 750 SSD.
A good and much cheeper alternative may be the Samsung SM951.

@Fernando
Here is a complete benchmarks report about an Intel 750 PCIe SSD 400GB running W7 x64 SP1 on an ASUS P8Z77-V Deluxe platform.
This Intel i750 PCIe device compliant to V3.0 x4 is slotted in an available PCIE V3.0 x16 (the fare most of the CPU is recommended, the PCIe V3.0 x16 graphic add in card is near most the CPU).
I have installed the last NVME driver (see capture screens).
Some utilities does not recognize this device (CrystalDiskInfo) , but a lot of them properly detects this device (but generally without SMART as Speccy or MAGICIAN does). 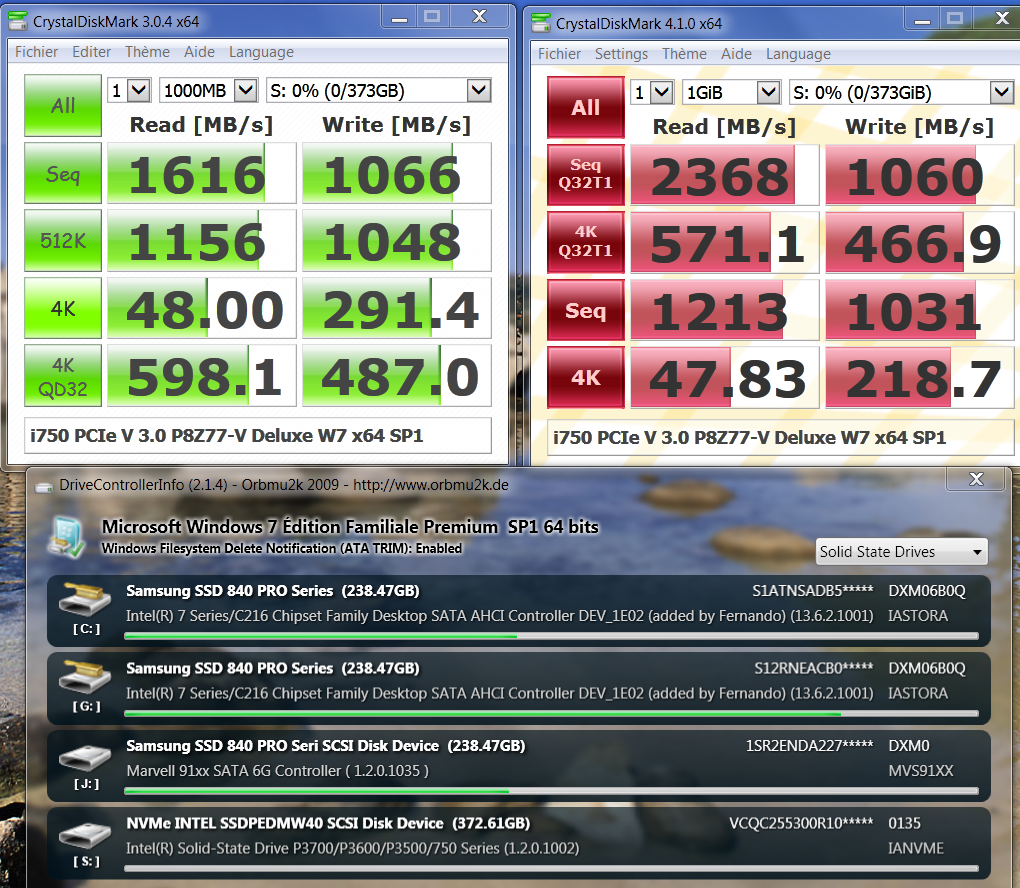 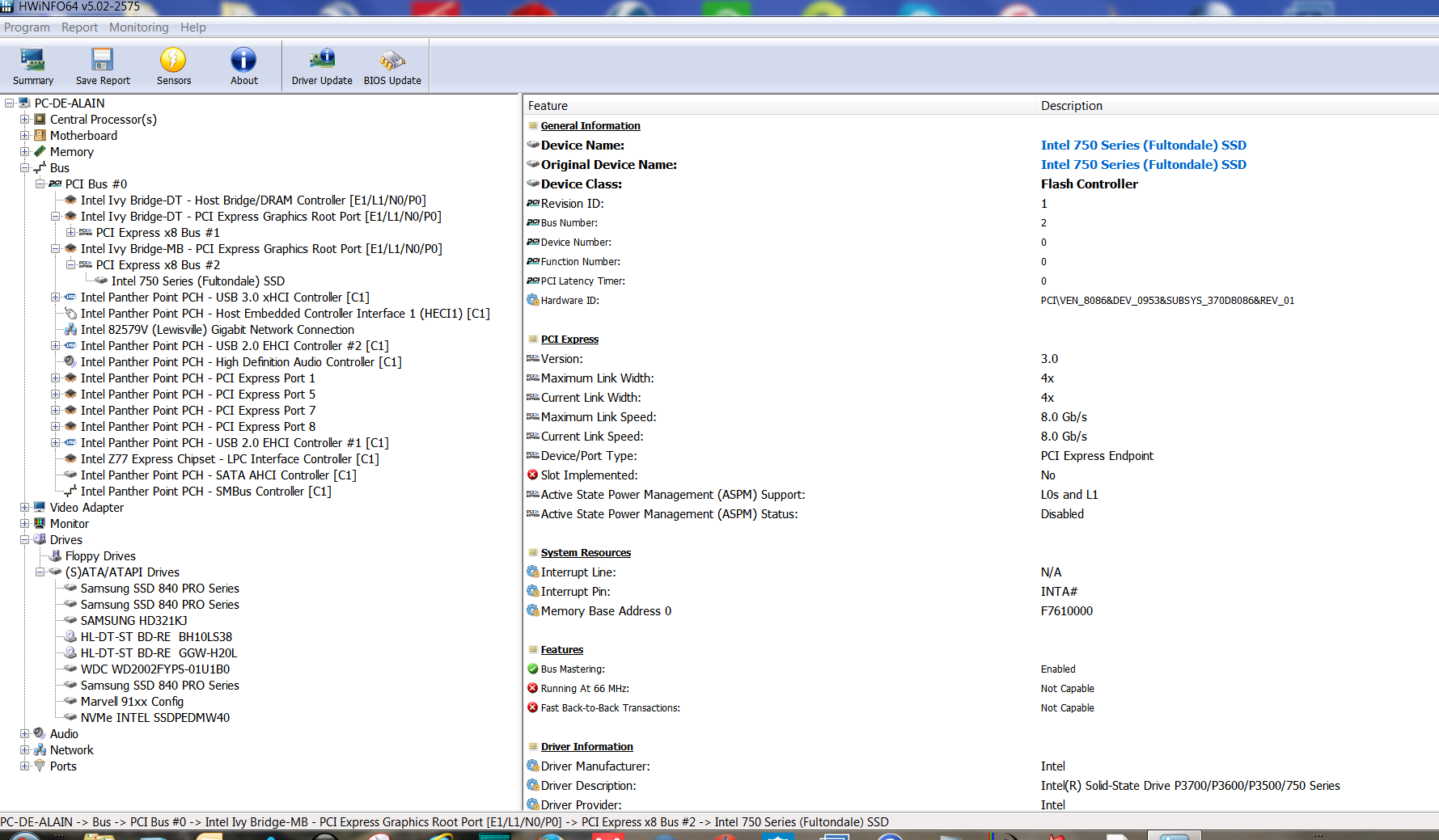 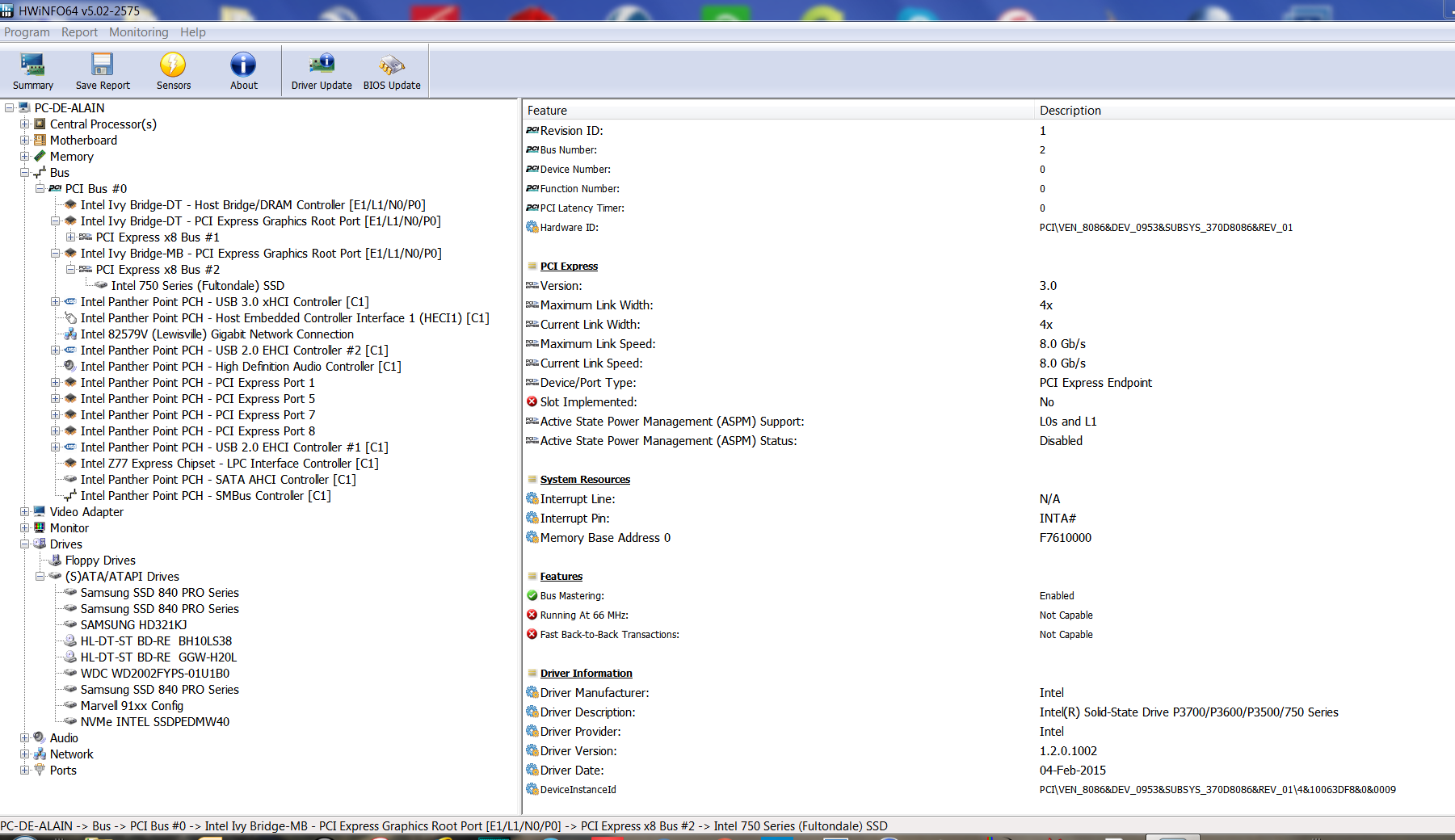 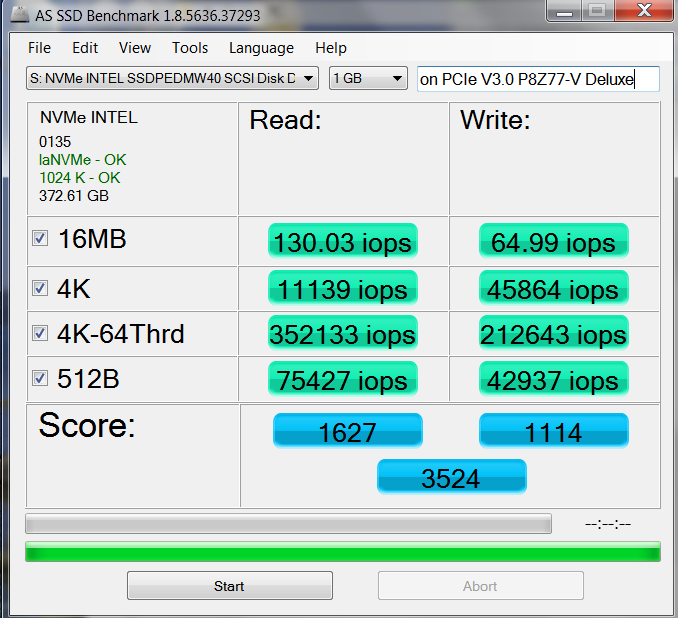 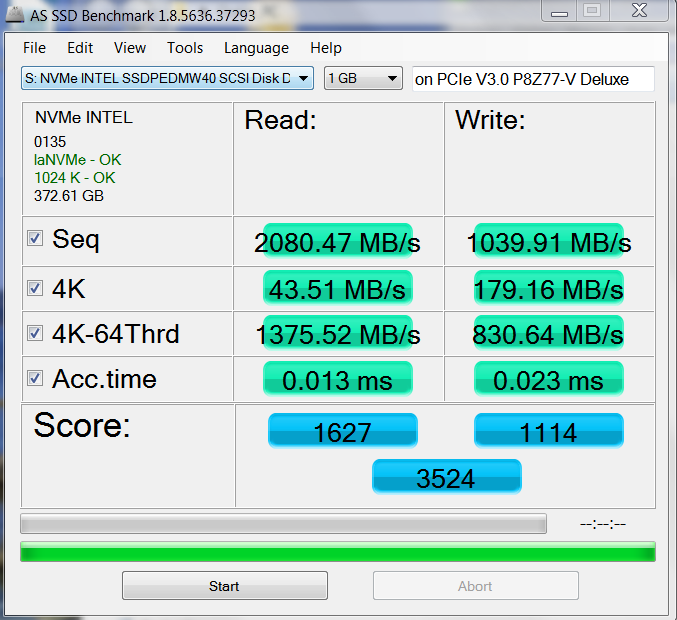 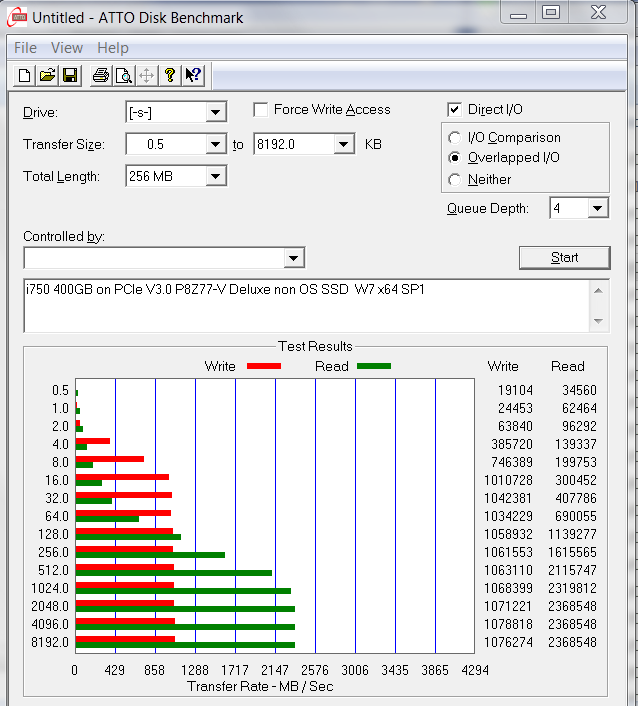 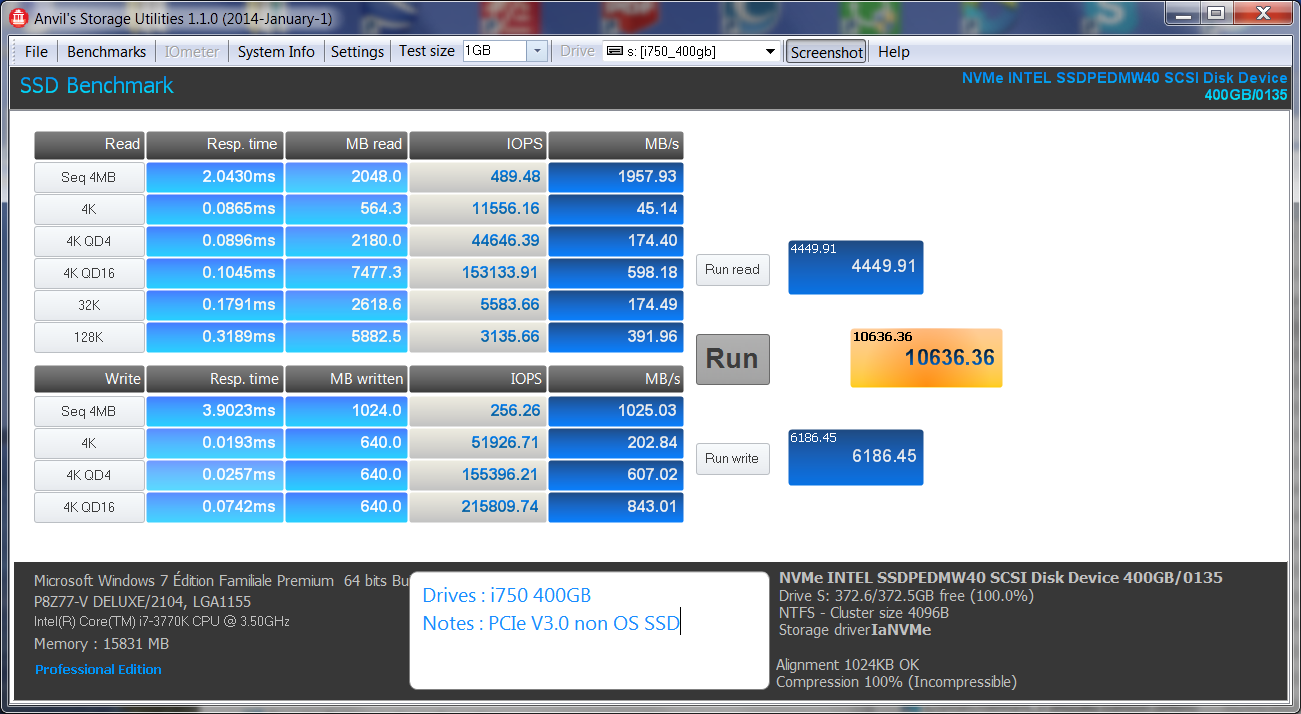 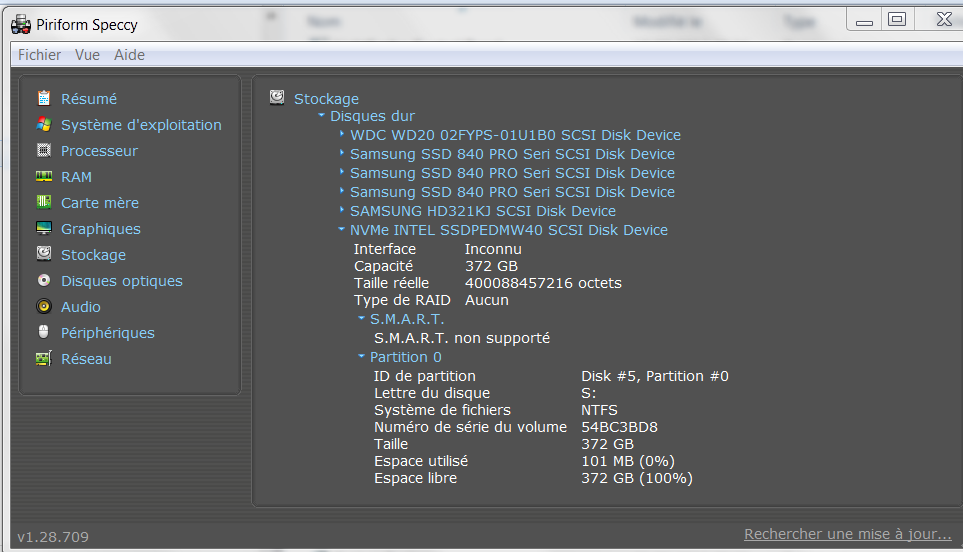 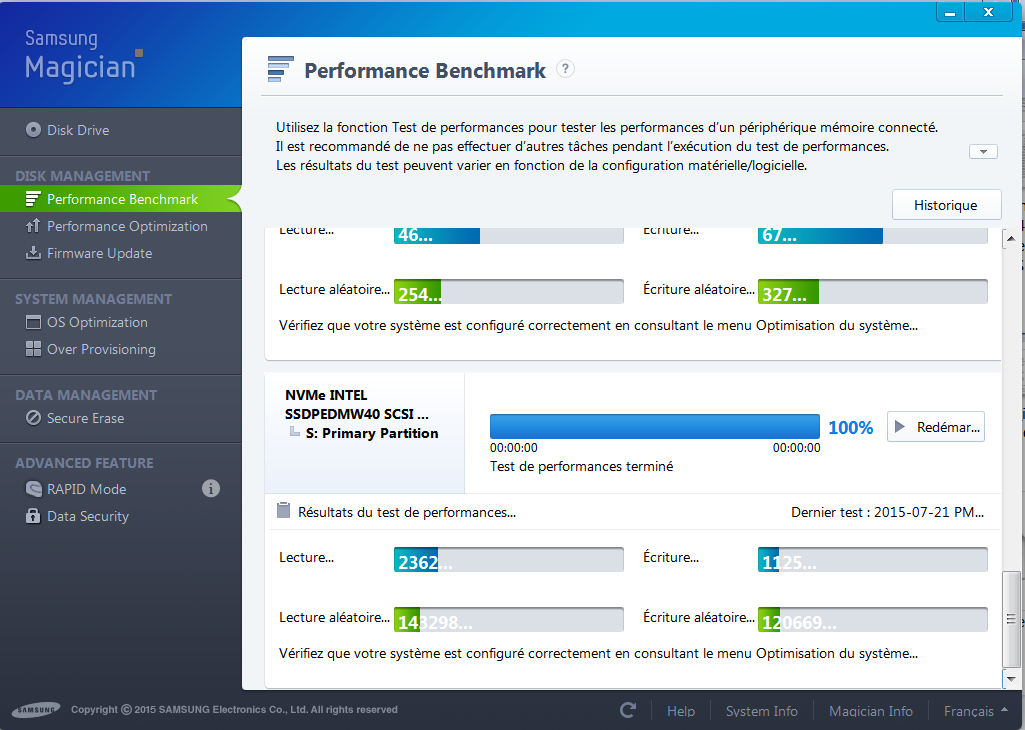 @ 100PIER:
Thanks for your report.
Your Intel 750 PCIe benchmark results are rather similar to those I got with my Z97 system.