I have an ASRock z68 extreme4 gen3 motherboard. When I was running Windows 7 I had my bios sata mode set to raid, with 2x 1tb HDDs in RAID1 cached by an old OCZ 60gb SSD. Note the 2x HDDs are not SSDs. I also had the Intel RST drivers installed. This wasn’t for my OS, just purely for games /media backup. I’m using a 250gb Samsung Evo for the OS install.

Is the setup above still possible in Windows 10? I installed windows under raid mode and fsutil reported trim was enabled on the OS drive. But, I wondered if trim needs to be enabled for the cache SSD?

Could this be achieved in AHCI mode using Windows tiered storage spaces? Or can I go the Intel rst way?

My main concerns are, I have data on those drives, and i wanted to know if trim is needed/can be enabled for the cache ssd (aswell as my OS ssd).

Many thanks in advance!

And yes,you can run Windows 10.many XP era (even WinME) setups are capable of running Win10.Unplug all other drives,only leave the main drive (an SSD and AHCI mode are recommended) connected during OS installation.Win10 will recognise SSD drives automatically

Generally speaking, at least 480gb SSD is recommended,you can use an external drive as an storage
For 4gb Ram and below 32bits windows is recommended,for 8gb and up use 64bits

And here is the updated bios for Z68 Extreme4 Gen3
Also MEAnalyzer result; 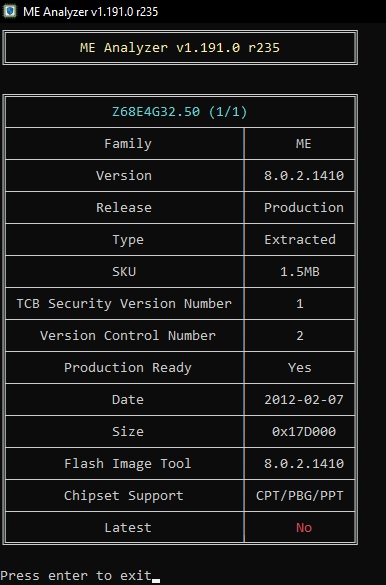 Hi. Thank you for the reply. I did think of updating the bios. I have some time free so I can play around to find something that works. I’ve read trim isn’t part of the caching process so at least I don’t need to worry about that. I’m not entirely sure I need a modded bios as I’ll only be using a single SSD on raid so I’ll swap over my sata mode and give it a try.