I have a circa 2013 Asus P9X79 motherboard, Intel i7-4930k and a GTX 1660ti card all working well with 2 Sata SSD’s and 3 HDDs. I use Primocache to cache one of the HDD to one of the SSDs for video editing and it works well. I was considering adding a PCIe expansion card like https://www.pbtech.co.nz/product/ENCOEM0010/kingshare-KS-NVX401-M-KEY-Nvme-M2-SSD-to-PCI-e-X4 to the x8 PCIe 3 slot with a Samsung Evo or Pro NVMe 500GB ssd and using this drive as my cache drive. I have done a lot of reading and still have not got an clear answer as to if this motherboard will be happy with a non-booting NVME drive available via PCIe. I do not want to mod the BIOS (4701) as I think I will be upgrading sometime next year and this is my work computer so I cannot afford the risk to have downtime or reliability issues. I can reuse the NVME SSD in my next build if i want to so a good way to improve performance without wasting any cash. Not so exciting for a BIOS modding forum but I guess you guys will know the answer to this question. Thanks.

An insertion of the NVMe module into the mainboard BIOS is not required, unless you want to boot off the NVMe SSD. So you will be able to use the NVMe SSD for the storage of data. The only precondition is the presence/installation of an appropriate NVMe driver (depending on the OS).

I am using windows 10. The requirement for the BIOS module is only for when the PC is booting and there is no OS running. Once the boot process has completed and the OS is running then there is all the required support for NVMe storage from the OS in terms of driver software and firmware on the NVMe SSD itself. Just confirming my understanding. I read that Samsung Pro NVMe drives had enhanced support on board for legacy systems such as mine - is this worth the extra spend? An Evo would be OK for my requirements in terms of TBW endurance. Thanks again.

@wantmorespeed :
Yes, the BIOS modification is only required,if you want to boot off the NVMe SSD, but exactly this is what I recommend to do. To boot Win10 in UEFI mode and to use the NVMe SSD as system drive is the best option for your X79 chipset ASUS mainboard.
The BIOS modification is very easy and the flashing procedure not much riskier than driving a car, if you follow >this< guide and let us check your modded BIOS before you are going to flash it.

OK Fernando, I will read the guide but performance not so bad at the moment, looking for easy improvements and will get adapter and EVO NVMe drive as data drive for now. When I get my new build sorted (with on board m2 and NVMe support in the bios) I will definitely convert to modded bios on the this X79 PC.

@wantmorespeed - also, if you search around, all the Asus P9X79 variants have already been modified for NVME and many unlocked for bifurcation controls too if you needed that, but as for NVME mod only, all variants have been done and already modified/tested BIOS are posted here in a few threads.

@Lost_N_BIOS - Thanks for the input. Feeling good about the idea of being able to boot to a NVMe SSD which once this PC is PC number 2 I would do to make it a superfast general purpose machine. But right now I think I will get the most benefit from having it as a drive for media cache and HDD cache using Primocache. I have to wait a good while for Premiere Pro, After Effect to load but I have plenty of memory so can keep everything open. But the transparent caching of my 4TB WD Black drive to SSD has made a big difference to editing videos - I get a 80 - 90% hit rate on the cache whilst editing. Good to know there will be a modded BIOS available for my basic P9X79 mobo as and when required.

I think other way around would be better (SSD as Cache, NVME Boot), but that’s my opinion, only you could test both ways and see which is best for your uses
Here is plain P9X79 NVME Mod thread, post #2 (it has other mods too, if you want NVME mod only let me know, I will redo for you) - [Request] Asus P9x79 BIOS with NVMe support

@Lost_N_BIOS - you may have a point in that NVMe might be overkill for video editing footage and a Sata SSD being a sweetspot. However, I have always made major changes to my computers just after Christmas here in NZ. I have the time to work on it and customers are all on holiday so no stress from them. It has worked out good that way. I have plans to move back to AMD and a 8 or 12 core Ryzen but I will keep the general setup in terms of storage as the caching is great at intelligently “moving” content to a faster drive when needed without manual file copying back and forth. Will have 2 NVMe drive then so can have boot and data sorted.

I’ll check out the post and see what changes are in there. I had to Google Bifurication to see what it was. Will post back and let you know.

@Lost_N_BIOS @Fernando - thanks for the help. The adapter card and NVMe drive went in as an extra data drive without any major problems. The new 500GB Evo drive is seen by Samsung Magician - benchmarked at the spec speed of 3500 MBps read and 3200MBps write. I would take you up on the offer of the modded BIOS. I have been using the 4701 version since it’s release and the machine has been super stable. I think I would just need the NVMe boot support module - it is all am I missing now in terms of functionality. Thanks for the amazing resource!

Unfortunately not all m2 addon card do work in different x79 systems.

I tested the Asus Hyper m2 (version 1) on the Gigabyte X79 UD3 when turned on it just goes on and off. on the other hand this asus hyper m2 card works just fine on the x79 asrock extreme 4 (on stock bios) as storage.

I got myself a cheap chinese addon card for 4$ for the Gigabyte X79 UD3.

this one, it comes without the cooler. shipping took more than 2 weeks as far as I remember.
https://www.ebay.de/itm/Computer-Expansi…872.m2749.l2649


get one with the cooler.
https://www.ebay.de/itm/NVME-M-2-zu-PCIe…rcAAOSwL1Zc72Xv

So keep this in mind.

@StormRaider - The card I bought was https://www.pbtech.co.nz/product/ENCOEM0010/kingshare-KS-NVX401-M-KEY-Nvme-M2-SSD-to-PCI-e-X4. Definitely has worked well and look and feels quality. One of the reasons I selected this card was the good reviews (especially for use with older mobos). I am going to mount a 60mm or 80mm Noctua fan to cool the NVMe drive. Where is sits is in a bit of a dead spot for air movement. Will post back once fitted and will give temps before and after to see if it made a difference. 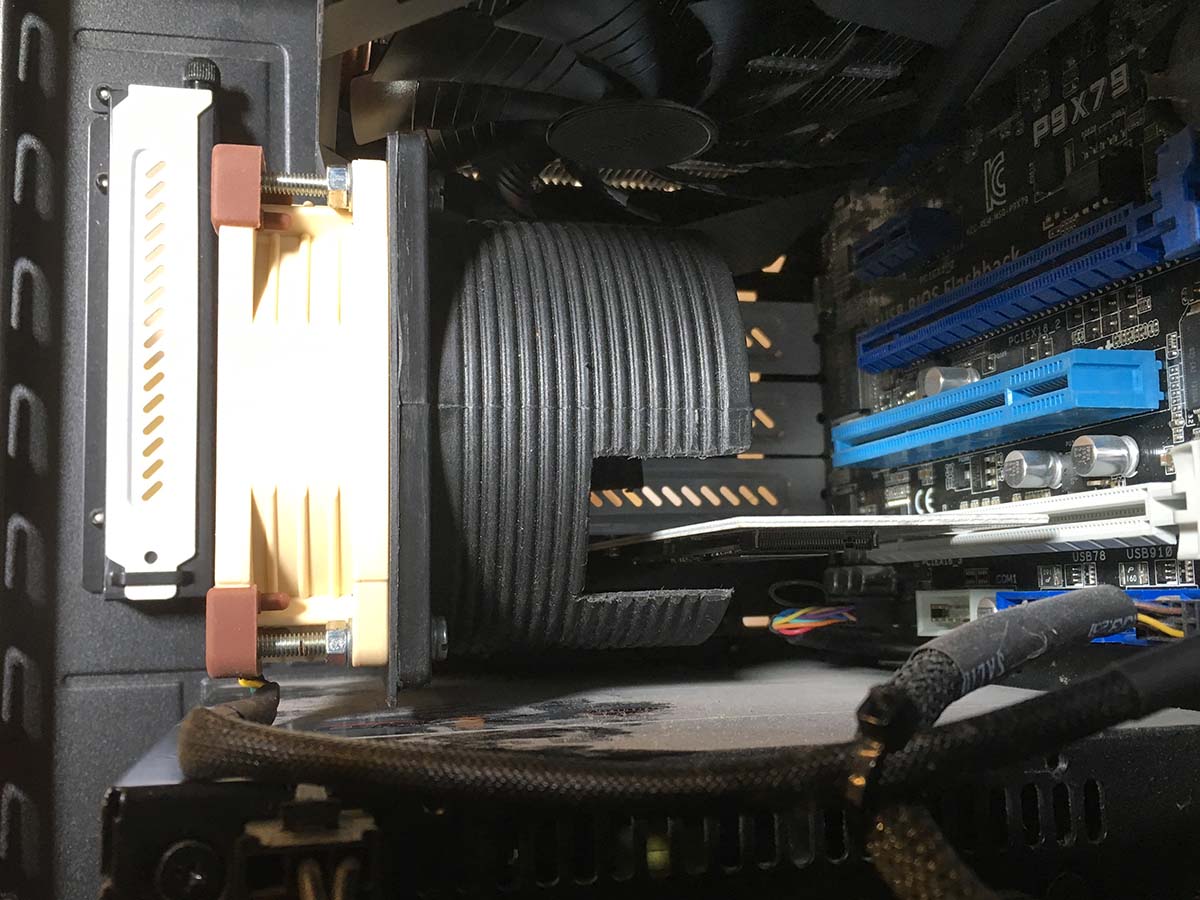 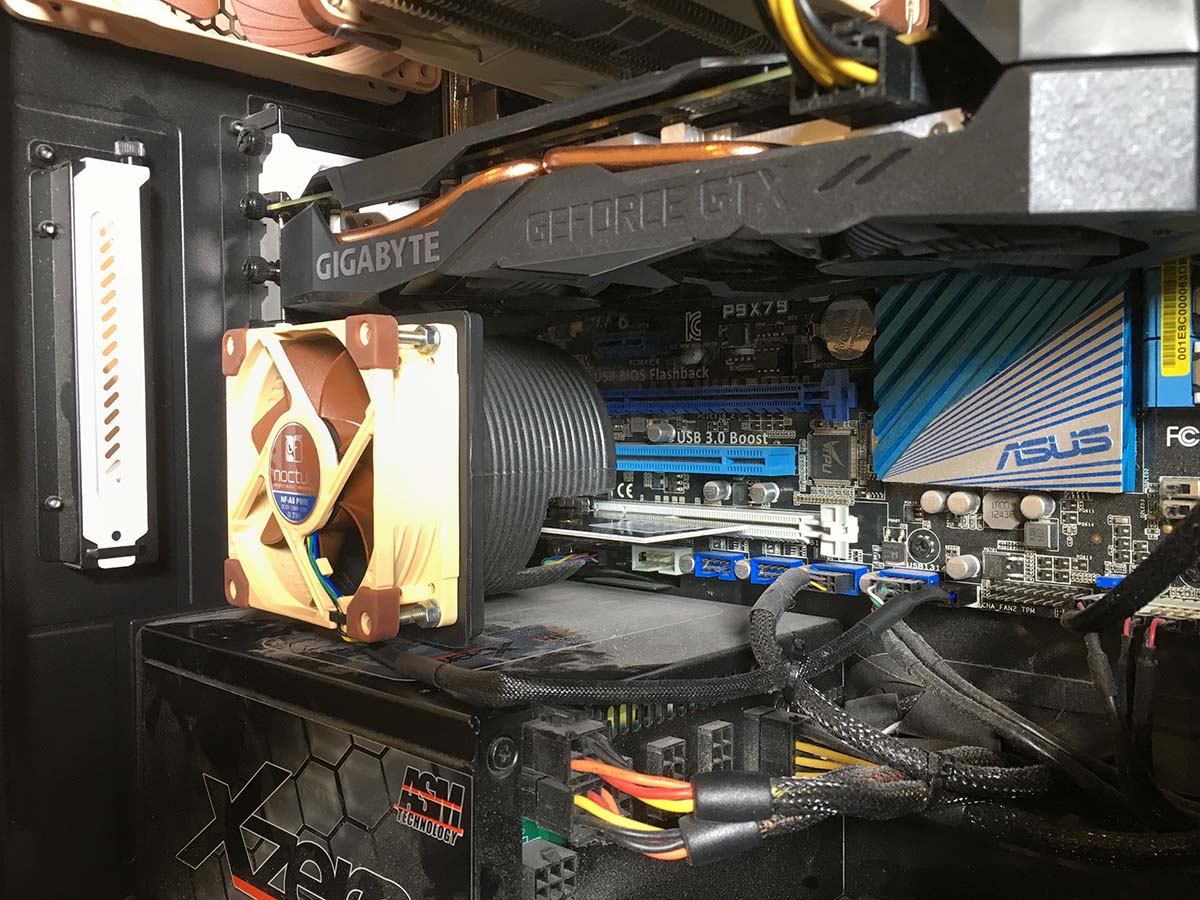