i m not an expert so i need some suggestions.

my chipset is HM65 mobile and i have a G2 socket.

So, these are my doubts:

what about ivybridge?
i really hope i can make it to work, can someone please tell me if it possible?

Do i need to update my acpi files to upgrade the cpu (cpu and intel hd code)? All these cpus have 4 cores but i suppose the states could be different, unless they are automatically generated.

When it comes to Ivy Bridge, the HM65 chipset works with Sandy Bridge only due to “hardware limitations” according to a 2011 Intel statement. In theory, HM65 can work with Ivy Bridge but only if the OEM adds low-level BIOS support for it so it is not something that you can fix by adding updated CPU microcodes, ME firmware 8 instead of 7, GPU vBIOS, RST OROMs and so on. Your only option is to stick with Sandy Bridge. From the latter, I would automatically exclude the last two Extreme processors due to the higher TDP and ridiculous price to performance ratio. From the sensible i7s, I saw that the Q4 revisions (2670, 2760, 2860) are almost the same as their closest higher tier Q1 options (2710/20, 2820, 2920) but for the same price. So I picked a Q4 processor. By looking at ebay, it looks like all 2630 - 2760 CPUs are currently being sold at the same-ish price (± 5$) and only the 2820/2860 differ by something like 20$ more. The 28xx series have two extra MB cache (8MB vs 6MB) but performance wise, the Q1 2820 is worse compared to Q4 2760 because frequency is more important for most tasks. Since you already have an i7, you won’t honestly see much of an improvement from any upgrade. But if you want to do it, I think that you should pick either an i7-2760QM or an i7-2860QM. I bought an i7-2760QM due to the lower cost but in your case you could get an i7-2860QM relatively cheap after selling your current processor.

according to the benchmarks, any recent sandy 4/8 is a big improvement compared to my 2630QM so it should at least compile faster, also they support ddr3 1600.


OT:
what do you think about liquid metal?
the new cpu will surely hit my temps, i am using artic silver 5 atm with good results, but clocks are different. (80C vs 95C under heavy load)

This is the Intel Ark list of compatible CPUs I created for my HM65 system. Indeed you need an i7-27xx+ cpu to have official 1600MHz support. There is also the limitation of 16GB RAM for 2630 only but most HM65 laptops usually had two slots so the maximum was usually 2x8 = 16GB either way.

You don’t need to update anything as your BIOS has CPU microcode support for all these SNB processors (CPUID 206A7). You can update the microcode though when a Spectre Variant 2 fix is released which has not yet occurred for SNB. The multiplier does not actually matter because all you need to look for is a faster SNB i7 overall, the rest will be taken care of by the BIOS.

As for temps, the TDP of 2630 - 2860 is always 45W so almost nothing will change. If you get good temps now with proper TIM application, you’ll see the same after the upgrade. This is more relevant to my system as my current CPU is a 35W SKU so an upgrade to 45W will be apparent. However, you also need to consider the TJunction which is 85C for my current i3-2310M but 100C for all SNB i7 SKUs. So it should be fine after the upgrade, even in my more extreme case.

As for performance, you will see an up to 27% improvement when upgrading to an i7-2860QM, which is what I would get in your case. In my case, I will see a 190% improvement from the weak i3-2310M when the new CPU arrives.

the upgrade went smooth, but something seems wrong, when i try to use all the cores the clock can t get past 0.80Mhz.
single core performances are ok, according to the benchmarks it s faster and it reaches 3.xGhz, while multi core is a disaster…

i tried to compile linux with make -j8 as always, but it s slow as hell.

OT: do you know the name of that orange thermal pad on top of the cpu? where can i buy them? (this - https://encrypted-tbn0.gstatic.com/image…JTvF9gA_S2BIivQ)

yeah, same for windows and macOS or any other linux distro

should i try a specific setting for throttleStop?

edit:
running heavyLoad utility to stress the cpu and intel power gadget and throttleStop, a big read "PROC HOT" apprears when the cpu reaches 55 C.
55 C is set as active cooling on my bios, fan at 50%, 75 C active cooling and fan 100%, 95 C passive cooling cpu throttling.
But the fan is always quiet, probably because it s locked at 800Mhz immediatly.

Could this be the cause? How or where should i change this setting?

i disabled BD PROCHOT in throttleStop and this unlocked the clock, but Package Pwr0 is 55W while the limit is 45W.
the cpu temp finally reaches 70-80 C and i can hear the fan spinning.

i m a bit concerned about the 55W, also i don t know how to adjust this setting on my bios so that i can unlock the cpu for all and a good value that does not burn my pc

anyway, according to throttlingStop prochot is set to 100C, but the cpu? ignores my current setting

This is clearly an OEM/BIOS restriction. As the description of ThrottleStop says, there are various ways for the OEM to limit the CPU to avoid issues on certain laptops, usually for thermal or TDP reasons. If you can change such settings at the BIOS then do so but also try the default settings to see what your OEM deemed appropriate for that model. In my case for example there are no locks when plugged in (can reach 3.5GHz for a few seconds when 1 core is active) but all cores are dropped to 1.2GHz while on battery. Overriding the latter via ThrottleStop can cause issues on my i7-2760QM system such as immediate power-offs, even in stock non-turbo 2.4GHz speed. So I decided to leave it at 1.2GHz while on battery. You can see the actual turbo boost configuration at AIDA64. 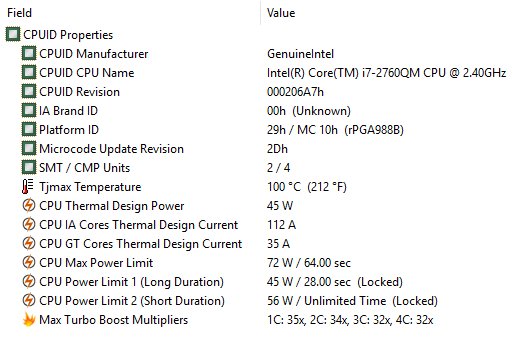 thanks, i ll check aida64
which bios options are responsible for this? i have loads of options here and i don t have any lock on battery, at least with the old cpu

anyway, what kind of restriction is this? the TDP is the same, also temps are good and i don t see why it should lock the cpu at 55C 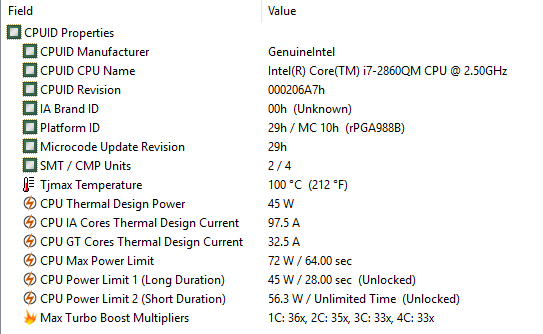 I don’t know what BIOS options can be changed for that, you’ll need to experiment on your own system. An alternative would be to make ThrottleStop autostart and adjust whatever restriction is in place by the OEM/BIOS.

my main os is linux

anyway i found bd prochot option in my bios but it seems a bad idea to disable it
i found the restriction btw, bd-proc is called when the cpu reaches exactly 3.0Ghz
this cpu can reach 3.5Ghz so that s the problem
do you know of any option that let me set the max freq or multiplier? x29 is perfect

Not by hard, these are set at the BIOS so it’s the only place to look for any permanent solutions. That x29 is a turbo boost frequency so you would need to effectively limit that. But I’m not an expert on those things. It surprises me that the laptop’s BIOS even has such options, unless it’s modded of course.

yes it s modded, and yes, my idea is to disable any turbo frequency greater than 2.9Ghz

it s really hard to find documentation about the bios options, i hope to find something useful in the acpi docs

windows 10 couldn t handle all my tests and now there s a nice bsod about the boot device Lol, damn you microsoft…

i ll open a new thread, thank you for your help

What laptop brand/model did you upgrade? I’m planning to upgrade my Asus K43SJ, same specs as yours (HM65, i3-2310M). How’s cpu temp and performance boost?

Mine is a Clevo W25xHNx which originally had an i3-2310M and I upgraded to an i7-2760QM. The upgrade was perfect, much better than the old cpu. The Turbo Boost depends on the laptop implementation but if the official specs mention support for i7, it should be good enough. Read my previous replies in this thread for all the info that I had gathered and how it worked out for my laptop.

Mine is a Clevo W25xHNx which originally had an i3-2310M and I upgraded to an i7-2760QM. The upgrade was perfect, much better than the old cpu. The Turbo Boost depends on the laptop implementation but if the official specs mention support for i7, it should be good enough. Read my previous replies in this thread for all the info that I had gathered and how it worked out for my laptop.

I’m still running 1333 but I upped it from 2x2 = 4GB to 1x2 + 1x8 = 10GB because I had another one lying around. At the time I had concluded that the added cost of transitioning to 1600 was not worth the extra cost based on performance metrics.

CPU and GPU upgrades may be possible on some laptops, but these will be harder. You’ll need to make extra sure to buy compatible components that will fit your laptop and be supported by its BIOS. Different CPUs and GPUs generate different amounts of heat, so your new components may generate too much heat for the fans and cooling solutions that came with your laptop to handle. These are all problems you’ll need to think about.