I have a very poor little 3770K that I can only do 4.5ghz stable at between 1.38 - 1.4V by using voltage Offset+ which is already too high, but I can’t go below any step on the Offset+ or windows will eventually BSOD after a while.

I wonder if CPU microcode is the problem here and want to know if someone really had bad luck just like me with an I7 3770K and got a way to improve this, because this looks way beyond just bad luck with the silicon lottery, don’t you think? 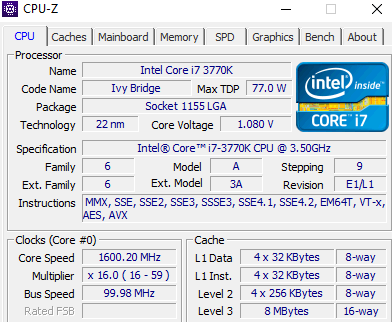 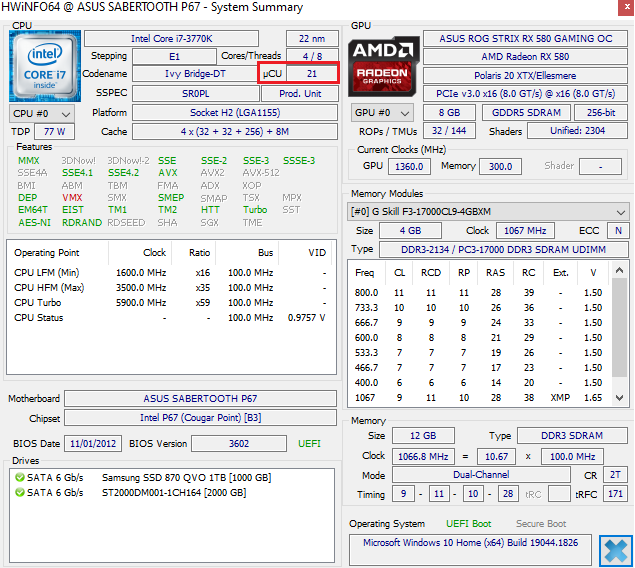 ps: I already have all the OC proper settings in the BIOS though It’s currently on a old “Asus Sabertooth P67 rev.B3” currently as I’m in the process of fixing the bios of my Sabertooth Z77, but the OC is pretty much the same between both boards so at least the updated Intel ME from the Z77 doesn’t seem to affect anything.

Its no bug, the OS will always load the OS MS mcode file on top of the hw mcode, so it must be disable.
These mcode are loaded in the file mcupdate_genuineintel.dll, rename it or delete it.

Related to performance… i only shared with you, whats is the best shared opinion around the web from IvyBridge OC mcodes, your decision on what mcode to use or the most suitable for your needs, every user should do his own tests.

Thank you for the explanation, but does that mean I should flash microcode V.19 in the BIOS and disable the windows mcode update?

Also about the very poor OC on this CPU do you think it’s really being crapped down a lot because of microcode related or that doesn’t affect that much and I simply had real bad luck with the silicon lottery?

I just did a quick test and moved that .dll from system32 to my desktop and windows wasn’t booting, went into the UEFI set the multiplier to default, windows loaded fine and now my ME is gone.

I don’t think this is any related to the bios hotswapping because I clearly turned power OFF after all the testing and shut down the PSU, put the P67 bios in and the CMOS battery and put my bigger GPU in and all was working fine at 4.5ghz.

I haven’t done a single thing more other than moving the “mcupdate_genuineintel.dll” and the ME is gone…

Do you know what could be wrong here?

now my ME is gone.

The ME doesn’t ‘leave’, normally. What makes you think that something is wrong with your ME?

Bios report ME as N/A and I haven’t touched it and now I can’t even set the ram and the last thing I did was just move the mcupdate_GenuineIntel.dll from windows system32 folder to my desktop and shutdown windows + PSU OFF.

Could the bios chip be having post hotswap side effects and now be slowly dying and self corrupting or something? (the last hotswap I did was a few hours ago and clearly shutdown PSU, but the CMOS battery back, P67 bios chip back and everything was fine until quite a bit after I just moved that file on windows and boom my ME is gone

Or could it be some kind of malware really waiting for me to boot up windows with the I7 3770K microcode 15 from the bios?

ps: when I removed the OC before windows started booting it shown a new screen with white letters saying to press something but only shown for a second couldn’t even read anything and I don’t know what it was and didn’t press anything either and didn’t setup anything in windows to do anything, very odd

The firmware isn’t completely static any longer, there are areas in ME and in bios region (NVRAM) that’s written to quite much especially in Windows. Since these regions have different addresses in a 4 MB or a 8 MB firmware, windows might’ve tried to read/write parts of NVRAM but it’s unclear what it did see when you had the larger chip put in. (Same for the ME, but normally not that amount of writing.)

I’d recommend that you backup your P67 bios with DOS fpt -d spi.bin, this way you might keep your board specific data (mostly MAC address). Post or attach the result here

Otherwise I’d quit doing things in parallel, wait until you got the Z77 board up and runing again and then you might restore the P67 firmware.
Don’t try to update the P67 bios, NVRAM and ME normally don’t get programmed. There might be switches for reprogram all areas, but those programs aren’t too reliable in what they’re doing.

And when you get the programmer- dump both chips again at least twice. Both dumps have to be a 100% identical and must have a correct structure (UEFIToolNE).

Thank you for the info however I still don’t understand why I made so many restarts and shutdowns and everything was fine until I really moved the mcupdate_GenuineIntel.dll and the next boot ME is gone, maybe just a coincidence sadly…

Anyway with the programmer “CH341A” can I read the whole 32MB of the whole bios chip and is there any app to heavily test the full memory on a infinite loop to see if any single sector gets corrupted or we can’t do such thing to this kind of memory that would like wear it down?

ps: I have a backup from a few days ago from my P67, but only the 4MB made with AfuWin64 and I made a backup just now with FPT and with hex comparing there’s quite a bit of different stuff, but sadly now without the ME it doesn’t let me flash (at least with Afuwin), will have to wait for the programmer to fix this crap

EDIT2: At least now the OC is accepting on windows 4.5ghz and the ram at 2133mhz despite the bios now showing 0mhz, if it keeps working screw the ME