Hi,
Im using this for my OS on the pcie 4x port. How it is working exactly? This is using the southbridge at any way?

thanks for helping me to understand

Im using this for my OS on the pcie 4x port.

Does it work? Are you able to boot into the OS?

This is using the southbridge at any way?

Thanks sir, i will read this asap! And yes it work perfectly

when i look at the rst report, it just showing nothing concerning the ssd pcie drive…

And yes it work perfectly

when i look at the rst report, it just showing nothing concerning the ssd pcie drive…

The Intel RST Console just manages the on-board Intel SATA ports and not the PCIe slots.

Hopefully you are still tracking this thread as I have been unable to find an answer to this question and you seem to have made this work!

I also have the P6TDeluxe V2 and want to use a PCIe M.2 drive with this board. That way I can pull the drive out and use it directly in my new build when I am in the mood to do it. I was wondering if the Plextor M6E PCIe is still working as your boot drive? Are you running windows 10 now?

Did you set anything special in the Asus bios in order to get it to work and what bios version are you on? I know the Plextor drive should “take over” at boot as it has its own ROM but just curious. I saw somewhere else that someone with a P6t Deluxe motherboard was not successful getting the Kingston Hyperx Predator to boot which since it also has it’s own ROM and that made me wonder.

Finally, installing the OS…I’ve read about some issues installing an OS on a PCIe SSD on older motherboards…did you bootup with your old boot drive and then install the OS or disconnect everything else and boot from the install USB/ISO?

Since I am not sure, if the Forum member Bomberman797 will read your post within the next days, it would be a good idea to send him a PM.

Not sure about the full tag, but Plextor M6e is bootable by default since it has the needed firmware inside. Check this link and this one. When I looked a few months ago, Super Talent PCIe DX1, Plextor M6e, RevoDrive 3 PCIe SSD, ASUS ROG RAIDR Express, RevoDrive X2, Mushkin Scorpion Deluxe, G.Skill Phoenix Blade are bootable right from the box. Haven’t checked with the newest PCIe SSD releases, but I suspect the newer ones will depend on the mainboard firmware.

Hi sir, yes the px-ag128m6e run just fine. I put on AHCI in Bios and voila. The bios actually name it "Drive 0" something. No problem at all for intalling win7 and up.

Hi sir, yes the px-ag128m6e run just fine. I put on AHCI in Bios and voila. The bios actually name it "Drive 0" something. No problem at all for intalling win7 and up.

Thanks! That is great info. And that means I’ll just be able to change boot priority and after the Plextor is recognized, change it to the boot drive. Really appreciate it.

Yes, from what I read, the Black M6E version has identical hardware as the "green" drive you have. Just different PCB color, fins, etc. Same controller and hardware so hopefully it behaves the same! 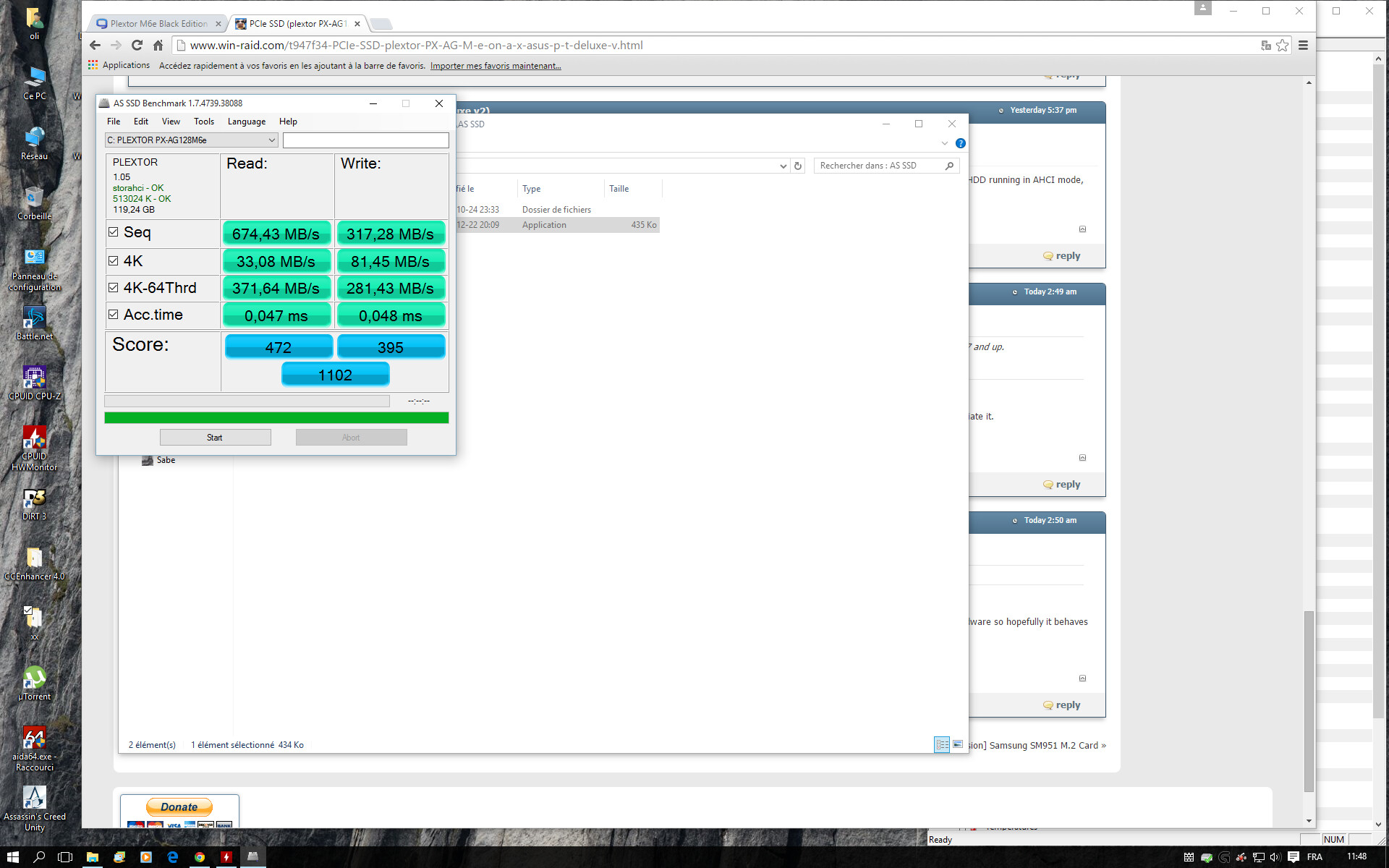 Very nice. Seems in-line with some benchmarks I have seen on reviews. Definitely going to give the black edition M6E a try!
Looks like our old Asus boards have a little life left in them.
Thanks again.

Since you are running this board and SSD with Windows 10, what Intel “Rapid Storage Technology” driver version are you using with the P6T Deluxe V2 and Plextor SSD?

I read some outstanding info on this site but still have some questions. Let me correct that, there is some absolutely incredibly awesome info on this site on the intel drivers! I read everything I could find… I have been looking and researching ICH10R and X58 RST drivers Win 10 support but want to make sure I install the right version on Win10 64 bit.

I don’t run my drives in RAID but do run AHCI. Looks like 12.9.4.1000 is the latest RST we can run but 11.7.4.1001 is listed as the recommended AHCI driver by the forum. If I am reading correctly they both are the “newer” type with the SCSI filter driver and therefore would have to have .NET updated before installing even after a clean Win10 install.

Are both good to use with Windows 10?

Also, did you have to do an “F-6” for a fresh OS install with either driver? If I recall with windows 7 and up you don’t need to…

Just found the post on the .INF updater which usually part of my new OS install process. Very interesting and I guess not necessary!

PS…sorry this almost looks like it should be a separate post, but since the question is specific to the board hopefully it is okay on this thread.

Am I correct that since I am only installing the driver (per your recommendation for non-RAID users/AHCI users) I don’t need to worry about .NET?

I also noted there is no installer and want to make sure I install the correct way. I tried to find this info on the outstanding web pages on the differences between the two but didn’t locate it. Since the drivers update so many chains I assume you can’t just right-click in device manager?

Am I correct that since I am only installing the driver (per your recommendation for non-RAID users/AHCI users) I don’t need to worry about .NET?

No .NET Framework is required, if you just install the driver from within the Device Manager.
This is the way I do it as well.

Thanks! Last question…since this updates several chains or line items in device manager, how do you determine which ones? Just the ICH10R ones and the hard drives?
BJB