Hello,
I recently purchased the 256 GB Plextor M8PE(Y), the add-in card because my motherboard doesn’t have an m.2 form factor slot. I am currently getting poor write speeds according to AnvilPro. See the attached image for reference. I was following the instructions according to the main article - [Guide] How to get full NVMe support for all Systems with an AMI UEFI BIOS. Once on step 5, I followed the directions for Asrock motherboards as specified here - [Guide] How to flash a modded ASUS/ASRock/Gigabyte AMI UEFI BIOS. I have an Asrock Z87 Killer Fatal1ty model motherboard with an i5-4670k and Nvidia GTX960 and am currently running an unmodified P1.00 BIOS version. I had created the modified P1.70 BIOS which I have sitting on my flash drive #1 ready to flash to my motherboard and a fresh Media Creation Tool Windows 10 installer on flash drive #2. I shut down my old computer and wanted to perform a fresh install, so I removed my old failing SSD and connected the following devices: Nvidia GTX 960 to PCIe slot 2, the Plextor NVMe SSD to PCIe slot 5; Flash drive #1 had the modified BIOS only (FAT32), Flash Drive #2 had my fresh Media Creation Tool Windows 10 installer, and a 1 TB HDD. When I went to choose my boot device in BIOS, it actually recognized the Plextor as a bootable drive! As a result, I was able to boot from the Windows 10 thumb drive and install to the Plextor. My system is bootable with the default P1.00 BIOS without me having to mod them. How is this possible? I thought the 8 series chipset did not have NVMe BIOS module. When I went to check my BIOS configuration after boot, it does show Windows Boot Manager as the selected primary boot device. The 1 TB HDD only has media on it; it does not have a bootable sector, so I know I am not booting from it, as the system still boots with the 1 TB hard drive disconnected Is it possible that the poor write speeds are due to the BIOS running the disk in another mode? I have already verified Write Caching is enabled on the device, see the attached image. Should I flash the modified BIOS to resolve the issue with poor write speeds? 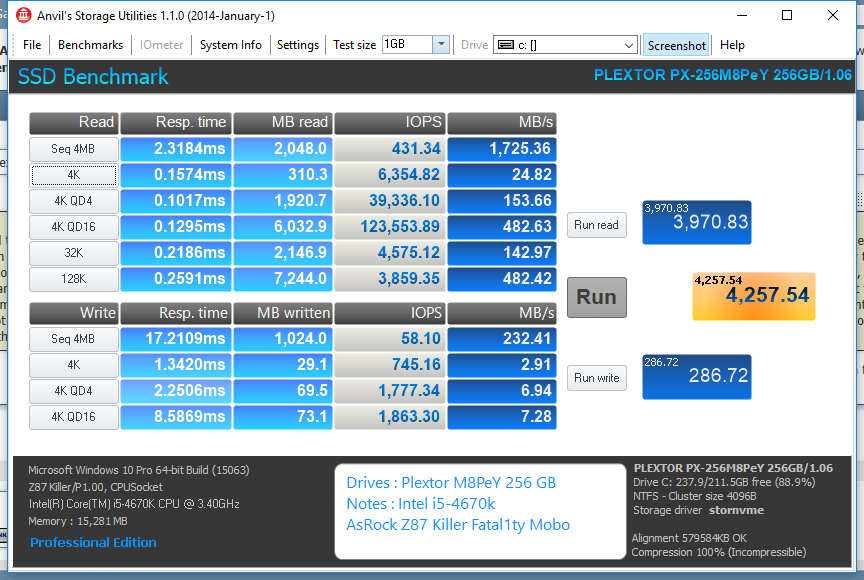 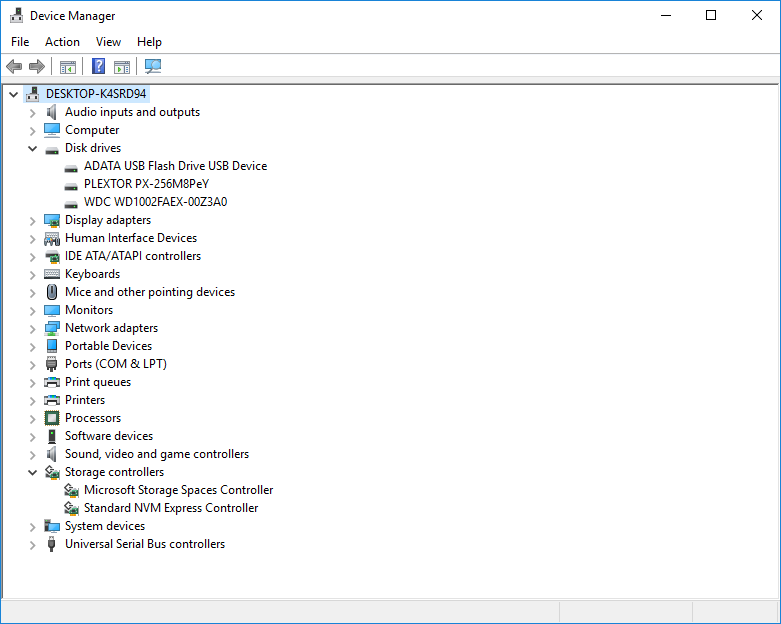 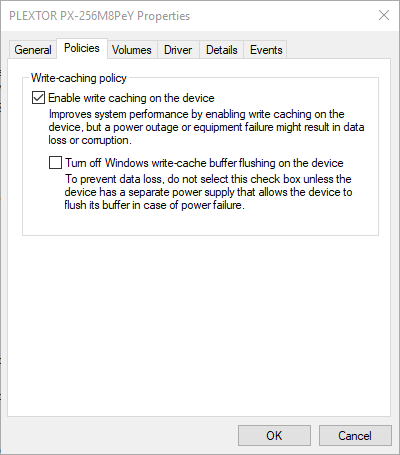 Any advice is greatly appreciated, thanks in advance.
Ace

As an update, I have ran CrystalDiskMark and the results are in line with what Plextor lists on their website. Should I be concerned with Anvil’s results? 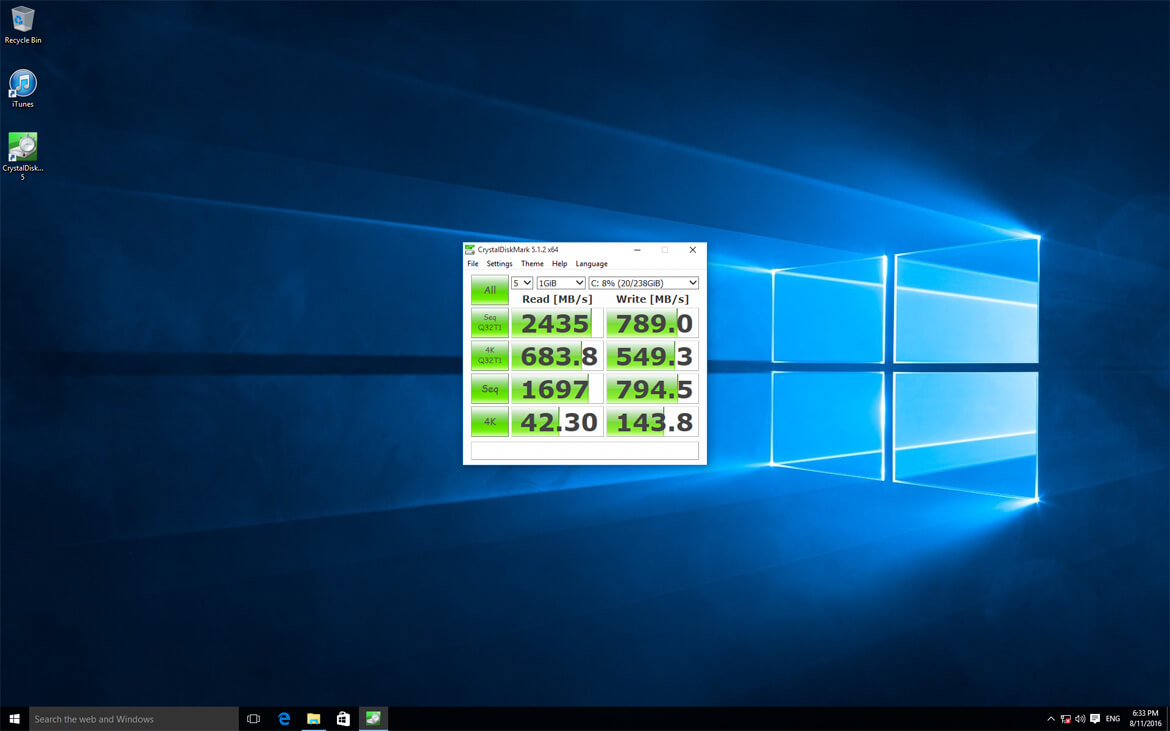 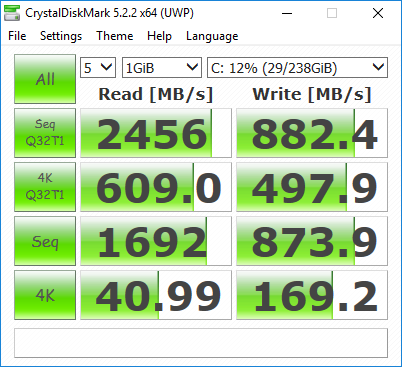 Is it possible that the poor write speeds are due to the BIOS running the disk in another mode? I have already verified Write Caching is enabled on the device, see the attached image.

You should check both Write Caching options, reboot and redo the benchmark test.
I bet, that your poor WRITE speeds are blown away.

Fernando,
Correct as always. Write speeds are now in line with your m.2 Samsung 950 pro results. Thank you! I remember reading that both should be checked earlier this morning and it slipped my mind. 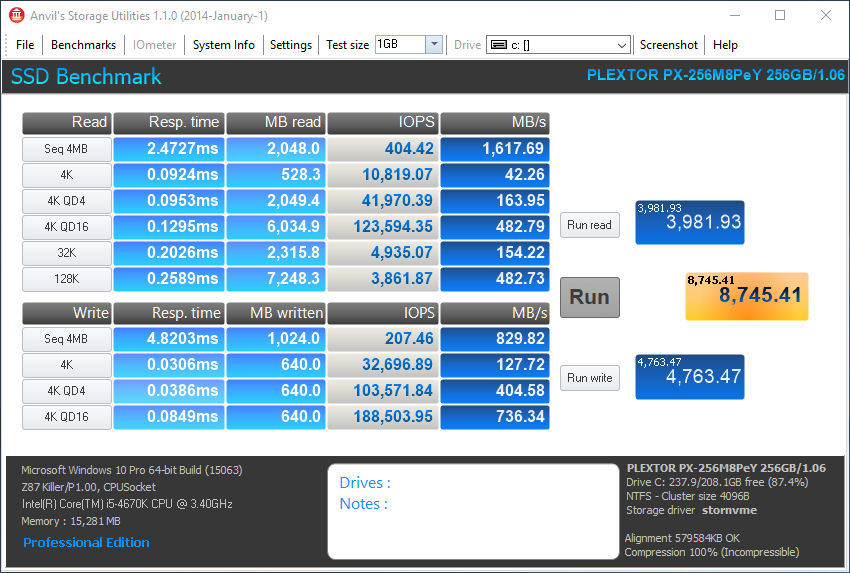 Would you be able to shed some light as to how the motherboard is booting though without me having to modify the BIOS?

Would you be able to shed some light as to how the motherboard is booting though without me having to modify the BIOS?

Fernando,
When I first installed from my Windows 10 USB, I was sure to boot in UEFI mode, and can confirm I see the EFI System Partition. I then verified the disk was initialized as GPT. 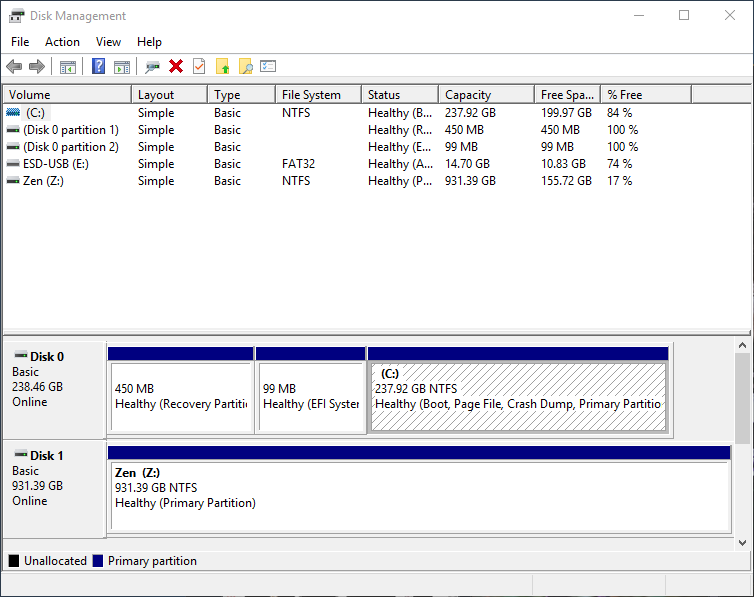 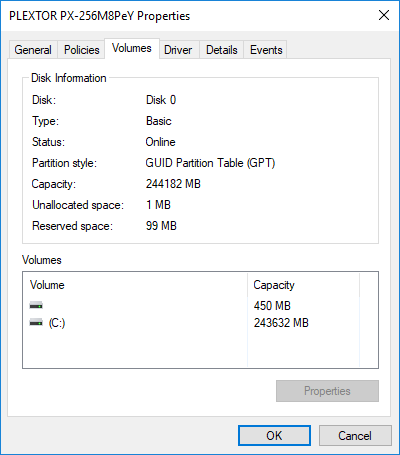 I’ll go and try and dissect the 1.00 BIOS and 1.70 BIOS to see if I can find where the NVMe module as Asrock makes no such indication as to whether NVMe is supported, nor is it anywhere on their changelogs. It should have a similar name to the ones you provided correct?

I’ll go and try and dissect the 1.00 BIOS and 1.70 BIOS to see if I can find where the NVMe module as Asrock makes no such indication as to whether NVMe is supported, nor is it anywhere on their changelogs. It should have a similar name to the ones you provided correct?

The related BIOS module will be named “Nvme”.

I have the 512gb version of that Nvme drive and the reason you can boot without modification of your bios is because the drive also has legacy rom. I can do the same on my Gigabyte Z87 system without mods. About the low write speeds I have also noticed that and was not pleased. Would make sure you update your Plextors firmware to the latest though.

@acemacbeth :
You can easily find out, whether you need to modify your in-use mainboard BIOS or not, by temporarily disabling the “Compatibility Support Module” from within the BIOS (= CSM setting within the BOOT section).
If you should still be able to boot into the OS, you don’t need to insert any additional NVMe module.

Worth noting that on my old X58 board that very same Plextor Nvme drive actually appears in the bios boot menu and a physical drive. Booting from it however was another issue.
Thats why I think it has legacy rom as the X58 board is pre-uefi…

@davidm71 :
I agree with you and suspect, that there is no EFI module within the BIOS of acemacbeth’s mainboard.
Nevertheless you cannot compare your X58 chipset system, which has absolutely no UEFI supporting BIOS, with the Intel 8-Series Chipset mainboard, which is used by acemacbeth.

I apologize for getting off track and should note that I also have a Z87 board like his with no nvme module present and have found that I could boot from the Plextor M8PeY with out issue.

Is there an advantage to booting with a native NVMe module than having to use the option ROM? I notice it does take a little longer to boot within the BIOS but once it gets to the Windows loading it instantly gets to the lock screen.