Is it at all possible to update from ME 7.1.10.1065 to ME 8.x? I would like to run an Ivey Bridge CPU with the HM67. Difficulty aside, is this 100% impossible or no? My BIOS is unlocked and has a "Me Fw RE-FLASH: enable/disable" (or something to that effect) option available if that makes a difference.

Also, is there a 64bit ME7 info tool available? I can only find a 32bit version.

Since I am not an expert regarding the Intel Management Engine, i hope, that you will get answers to your questions from somebody else.

Mobile 6-series chipsets are not compatible with MEv8 and Ivy Bridge CPUs. 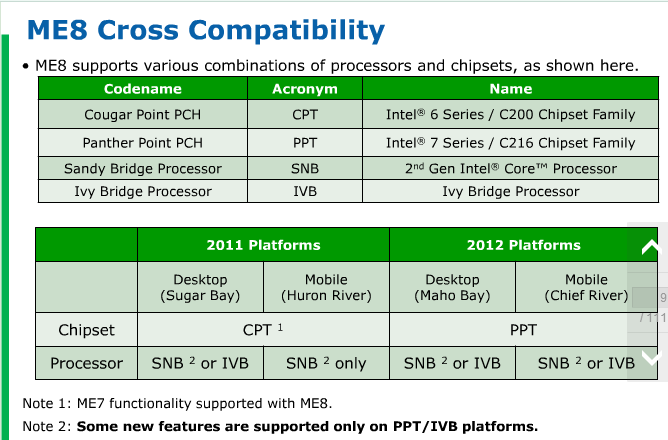 I think it’s more a business reason than an actual compatibility reason. I’ve read of someone receiving nasty emails from Intel for posting info on getting Ivy to work with overclocking on a desktop board with ME7.

We have tried it here and MEv8 simply doesn’t start on HM67.

I respect your efforts, but are you sure it was due to HM67 definite incompatibly or possibly something else?

I’m working with a HP laptop with Insyde BIOS (unlocked). I’m really a complete noob with all of this, but just messing around today this is what I did…

I’ve extracted the ME region from my BIOS and loaded it up in FITC 7.x. I then opened up the doner BIOS in FITC 8.x and changed everything in the ME region to match that of my BIOS. Some things are extra or missing since ME8 is a little different. I then built the ME8 firmware using the Intel series 6 HM67 settings. FITC output a ME region file I can now paste back into the original BIOS file.

Does any of that sound right? If I update the ME region in my BIOS with this new built ME8 along with the Ivy microcode, what are my chances of recovering if something goes wrong? IC transplant or can I still recover with normal Insyde method (HP_TOOLS recovery)?

It has been a long time since I have played with modifying ME7 to ME8 for ASUS P67. Before Ivybridge ASUS had officially stated on the Hardforum ASUS P67 BIOS thread (now strangely removed) that it was impossible to even update ME7 to a later version because of being locked by Intel but that was soon proven to be incorrect. At that time I did get a functioning change from ME7 to ME8 before Ivybridge was released for use with Sandybridge but since ASUS went on to make the modifications for ME8 and SNB/IVB shortly before IVB release there was no need to go further.

IIRC changing just the ME Firmware from 7 to 8 is not enough. The BIOS drivers used for the ME firmware need to be updated too in order for the BIOS to be able to communicate with the ME Firmware. For IVB support there would need to be a lot of modifications to other modules. Microcode itself is not so important, this is just an update to fix errata for the CPU and add or remove special features. Technically the CPU should run without any microcode update, if it halts on lack of it then it is most likely the BIOS refusing to continue rather than the CPU not being able to operate. I have run a desktop and laptop successfully before without any microcode update.

Possibly you could get it working but it will involve a hell of a lot of work and would be extremely time consuming and difficult. Use of an SPI programmer would be a must IMO unless you want to pay exorbitant fees and wait for someone else to fix your broken BIOS.

Here’s a >link< to a mobile QM67 modified from ME7 to ME8 with added IVB support but note that it was done by the manufacturer.

Unless you want to learn from this adventure it would probably be better to sell the HM67 and buy a new laptop.

oh, and I have to say I am interested on that "adventure"

I have a external programmer and installed sockets on the motherboard wich I used several times to recover the laptop from non working status and allowed to mod and unlock my BIOS a lot.

I managed to backup a me8 from another newer laptop, edit it with FITC to fit my laptop settings and flash it to my laptop.

unlikely other times, it booted instead have black screen after flashing ME8, but my laptop is unable to comunicate with the ME region like you said, it ask unknown firmware and version 0.0.0.0 on the bios ME menu.

I was wondering if you could help me to know wich modules I have to edit/update in order to make the ME8 firmware to comunicate with my BIOS.

bad thing is that I cant locate the bios to download

but, I think, this proves it is posible anyway , compatible firmware is needed.

you could probably save the installed BIOS with Intels FPT tool to a file, then make your changes and reflash it using FPT again.

yes, I know, however, for that, I would obviously need phyisical access to the hardware, and it is not the case if I do not own that motherboard, also I dont know anyone who have it, I just found it on google after some time of reserch.

the software of the website is not avalible, anyway, I do not have plans of spending more than 100$ in a whole motherboard and ship costs just to dump the firmware.

anyway, I sent an email to the website support, maybe they have a BIOS updates FTP site or somewhat.

however, if the info from that site is correct, that HM67 motherboard FW could have the key to bring ivy to all our hm67 based laptops.

ok I understand. I thought you have plans to get this board in hands… Anyway good luck and let us know how it worked.