I have a question:
For the Asus P9X79 WS Board there is a official update with the current spectre microcode patches.
https://www.asus.com/de/Commercial-Serve…/HelpDesk_BIOS/

Has somebody tried that update yet? Does this update have NVMe boot support already? It is not mentioned in the update info, but this should be standard nowadays.

@geke - thanks. Yes, people have been using 4901 BIOS (if that is one you ask about, can’t check, Asus site not loading for me now)
No, NVME is not in there, you need to add it yourself. On the thread where you got the P9X79-E WS there should also be regular P9X79 WS mod with NVME, I’ve done both here, so I know they are out there, if you need me to find let me know
No, you cannot use -E BIOS on the non-E board, if you want CPU microcode updates in a BIOS that is not there you can do that yourself too via UBU or UEFITool etc, or ask someone to update for you. I think on the NVME Mods I’ve done for all these, I probably also updated the microcodes too

I found one place I posted both with NVME mod, but sounds like I did not update microcodes
[OFFER] ASUS P9X79 WS NVMe Mod (2)

I want to ask if it would be possible to update this bios/patch with the current microcode updates? I do not think that Asus will do it.

* Edit - @geke sorry, I will move your post above to your original thread asking about this, once you reply and confirm board, I see I didn’t ever give you BIOS with microcodes, sorry about that!
[OFFER] ASUS P9X79 WS NVMe Mod (2)

Please confirm which board you have, since you original asked about P9X79 WS and now asked on P9X79-E WS thread, once you confirm I will make you new BIOS with NVME mod and updated microcodes
Or! Do you have both boards, and need NVME + Microcode update for both P9X79 WS & P9X79-E WS?

* Edit - here is both! And I will move these posts back to your other thread linked above 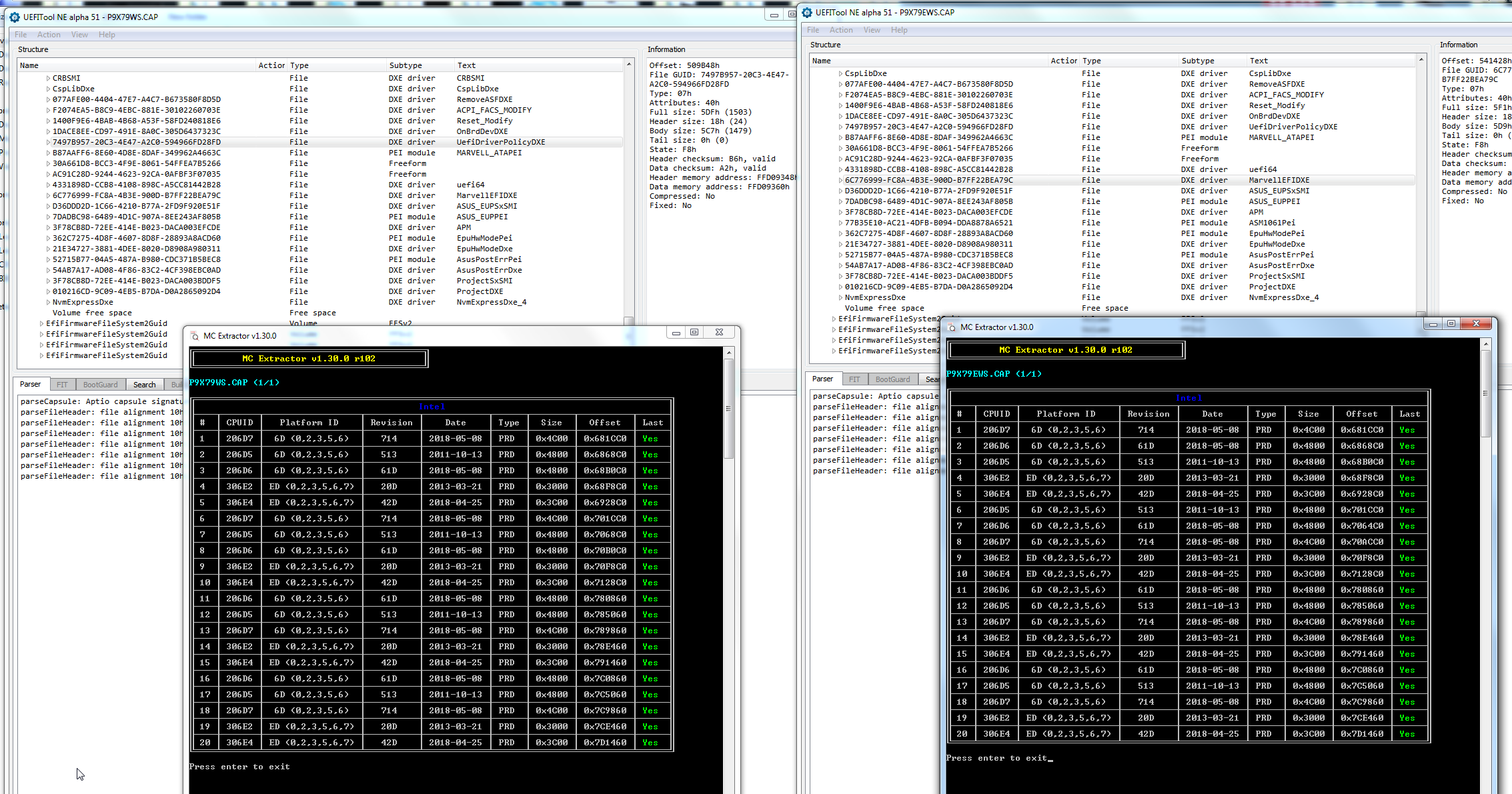 Originally I have a P9X79-E WS. With this board, I have quite some problems. So for testing, I have also a P9X79 WS here at the moment and maybe switch to this board later. If you do not mind it would be nice to have the update for both of them.

could you add any microcodes to support Engineering samples of the cpu from Sandy Bridge E?

@geke - I did both BIOS in link above

@Pr1v0 - if Sandy-E retail works in the board then yes, let me know CPU model

The CPU is an i7 2490x es (similar to i7 3960x with c1 stepping) is a really early model however I spoke to the previous owner and he informed me that the CPU should work with the default bios and the chip is probably dead, but thanks for the help, managed to add some microcode myself with the tool as well

It should work only if the old ES microcodes are in place (206D1-D3), for B0/C0//C1 etc, so probably only older BIOS or if put back into new BIOS. I would test some of the earlier BIOS releases before you consider the CPU dead.
In the above BIOS I updated, those microcodes were already removed from the stock BIOS, so it wouldn’t work with or without microcode update (Needs old one put back in) Which board do you have and I’ll make a few BIOS for you to try
If you have P9X79-WS then BIOS 1202 should work (I didn’t check others), if you have P9X79-E-WS a BIOS Mod would be required since all these have been updated and PRE/ES ucodes removed and switched over to CAP type BIOS from the start (I checked all the way back to first BIOS)

Any new/current BIOS would need the old PRE 206D1-D3 inserted back in, and then may or may not work (Depending if Asus blocked compatibility aside from just removing the ucodes)

I tested the modded bios supplied by Lost_N_BIOS and can confirm that it is applied successfully.

At least my NVMe drive is detected - more stability testing will come later (I just flashed the BIOS).

I also tested a unlocked version that was posted at another thread, and that version did not work for me. See my report there
[OFFER] ASUS P9X79 WS NVMe Mod (2)

@geke - see my reply on that thread you linked, if you are still interested in that BIOS

do you have the latest bios for p9x79ws?

@tcm.cp : Welcome to the Win-RAID Forum!
Our BIOS modding Guru Lost_N_BIOS may not reply. He hasn’t been online since January.
If you are searching for an already modded BIOS for a specific mainboard, you should better look into >this< Sub-Forum.
Good luck!
Dieter (alias Fernando)