@Lost_N_BIOS
Well, I ordered CH341A programmer and started to read “how to use it” because of other problem. My son has an Asrock Z68 Pro3 with sandy 2500K and followed the UBU guide to update the microcode. It updated all microcode and after flashing it, the mobo never booted again.
Later found >this< thread, and realized I must be very careful. I have been worked in a computer shop from 2004 to 2010 and I never made any bad bios flash, except now. So first I must wait for the tools arriving, than reflash the chip and than try to update the Z68 Pro3 latest bios with Sandy microcode only…
I kindly accept help, maybe I made something wrong…

I’ve made a BIOS with microcode updates for ASRock P67 Pro3.
I made it with HxD & UEFITool. I found special thing: microcodes (mc) has to be in a address sequenz of 800h.
If that not happens, AMIBCP v4.55 couldn’t find every mc. So sometimes I had to inserted 400h of “FF”.
You can delete 400h @ the end of mc section. There are a lot of "FF"s.

It happens sometimes, even with stock BIOS never modified. Now you will have programmer, so you can fix it all usually. Did you get the SOIC8 text clip cable?

Yes, once your programmer arrives I can update the other BIOS for you too. If you want to send me your modified BIOS that killed the board I can check for you to see if it looks bad, or maybe just bad luck that day and had a bad flash (ie not due to the modified BIOS file) 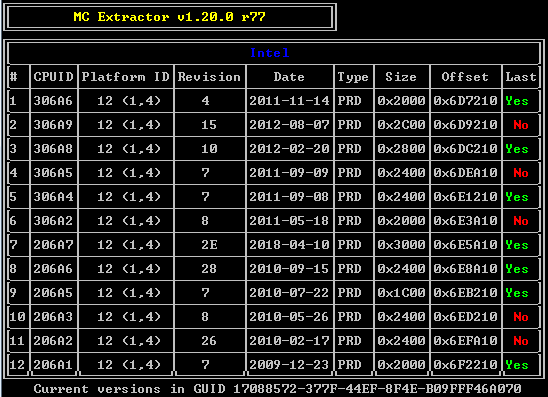 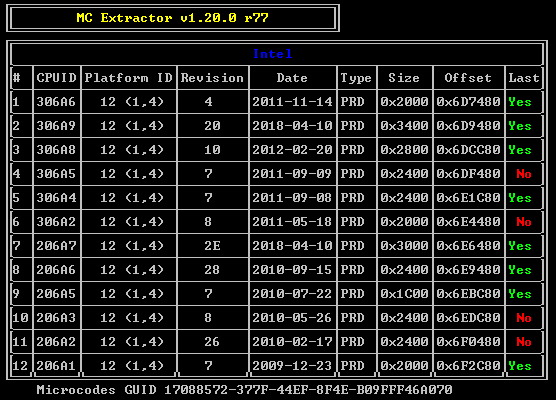 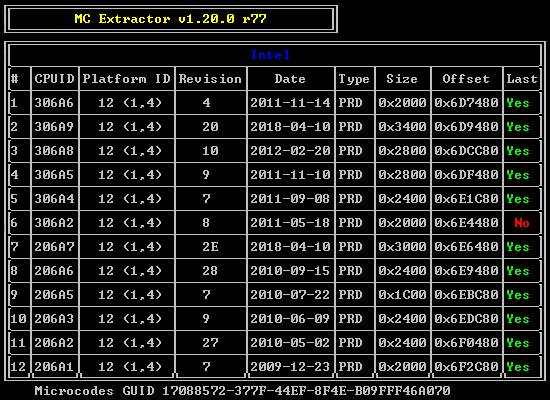 !!! I can’t give any guarantee/warranty, but i made this by best purposes & knowing. Use/Flash of own risk only !!!

@Lost_N_BIOS Being very angry I deleted all files…

@MiesMosel Thanks a lot for your efforts. The bios - that earlier bricked the mobo and made by myself- I checked twice after MCs update and looked exactly like the above pics. All MCs was green.
[URL=@Lost_N_BIOS Being very angry I deleted all files…

@MiesMosel Thanks a lot for your efforts. The bios - that bricked the mobo- I checked twice after MCs update and looked exactly like the above pics. All MCs was green. In these posts @Dogg supposes only sandy bridge MC (206A7 cpuid) should be updated in the bios file, avoiding sandy+ivy update together.

/Just fot the record, the latest Intel Microcode Guidance in the desktop line only mentions Ivy Bridge E series Cpus (306E4), others only mobile (306A9) and servers (306E4)/.

MCE cannot show correct alignment. It only shows MCs, that were found. I checked it with AMIBCP v4.55.

You can show me your BIOS file, that bricked the BIOS, then I can proof it - if you’ll find it.

P.S.
In about one week, I’ll get my BIOS programmer, too.

@Girjaman @MiesMosel @Lost_N_BIOS :
Your posts have been moved by me into this freshly created thread, because Girjaman’s problem regarding the CPU Microcode of an ASRock AMI UEFI BIOS has nothing to do with the topic of >this< thread, where they originally were posted.
I hope, that this is ok for you. Thanks to MiesMosel for his hint.

@Girjaman - probably alignment issue as @MiesMosel mentioned, or FIT maybe, you should be able to use both Ivy and Sandy, people say same for Coffee/Kaby/etc today too, and if don’t correctly you can have both or all three too when people say only two.
Some mods done break/bad if using tools like UBU, AMI Tools etc, some have to be done by hand, others by hand then rechange something with another tool like UEFITool etc. So, that user could be correct, or just could have been trying incorrect methods back then, making it seem like fail if you tried to use both.
I don’t buy that at all, and see no valid reason why only SB or Ivy would be required or safe/dangerous, I think just bad advice, method, or tools used back when he posted that.

Let me dig into my boards and see if I have one of these around now for testing, if I do I will let you know and I will test both myself.
* Checked, and I don’t have anymore, P67 one either

Once your programmer arrives it will be safe though, I can send you BIOS to test with both and if bad then you can reprogram working BIOS instead.
If you want to test that I mean, I think it would be no problem, other than maybe overall size of all microcodes included might limit things, but that’s a different issue and shouldn’t be stated as only Ivy or SB, but I doubt that would be what caused them issue or they would have said probably.
All hard to say without testing myself but it’s something I’ve never seen on any board BIOS from that era.

Yes, you need to order cheap CH341A flash programmer and SOIC8 text clip cable, so you can start programming BIOS when you want instead of waiting/trying to find way to flash which is risky if forced sometimes.

@MiesMosel
On bios programming I mean reflashing bad chip to work again. I do not know any version of CH341A Programmer, so first we have to get acquainted. Than trying to flash with modded bios. The methods are the same.

Guys, as soon as I get the tools, I come back

This programmer looks on Windows like a normal flash-tool combined with an hex-editor: 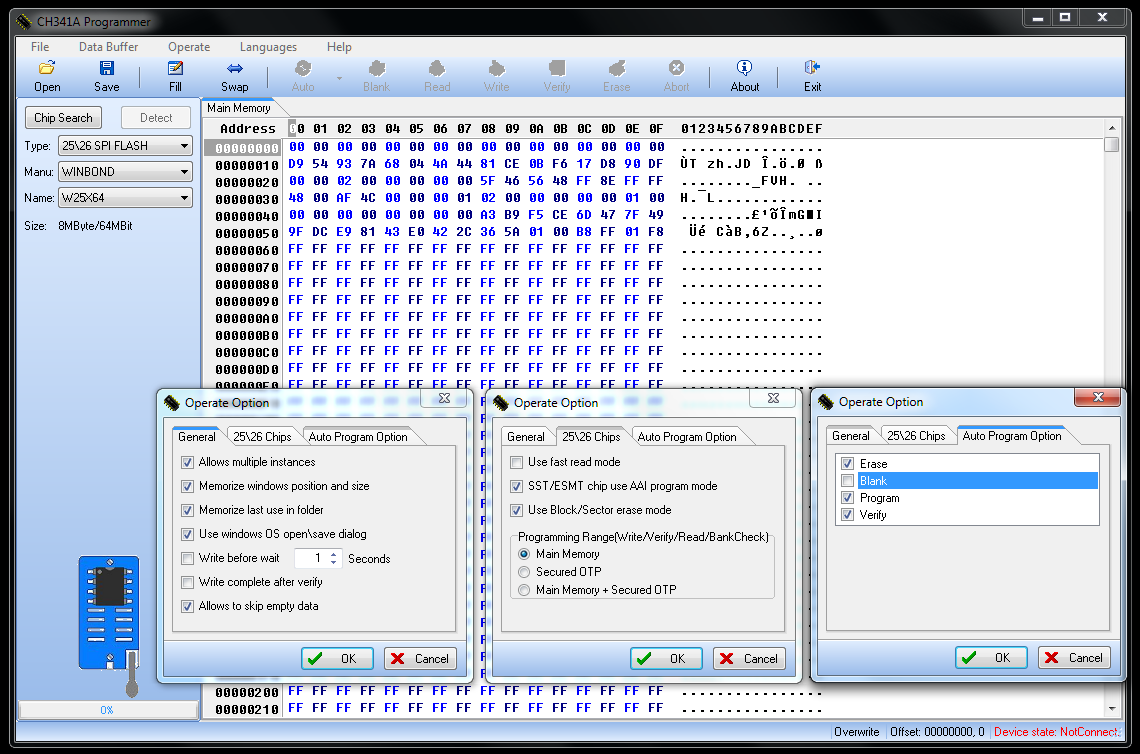 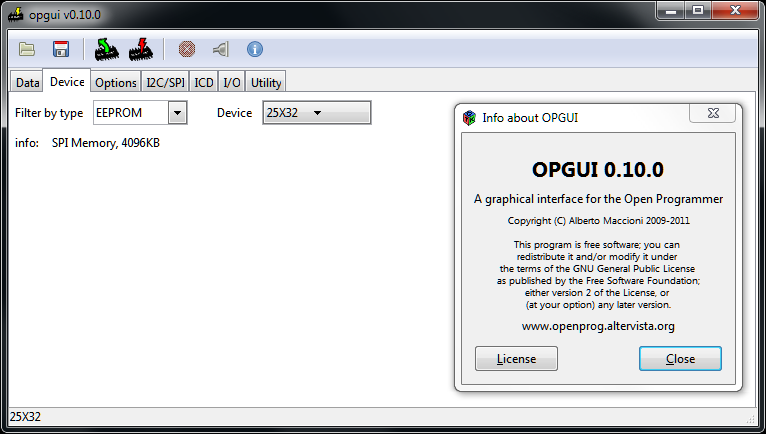 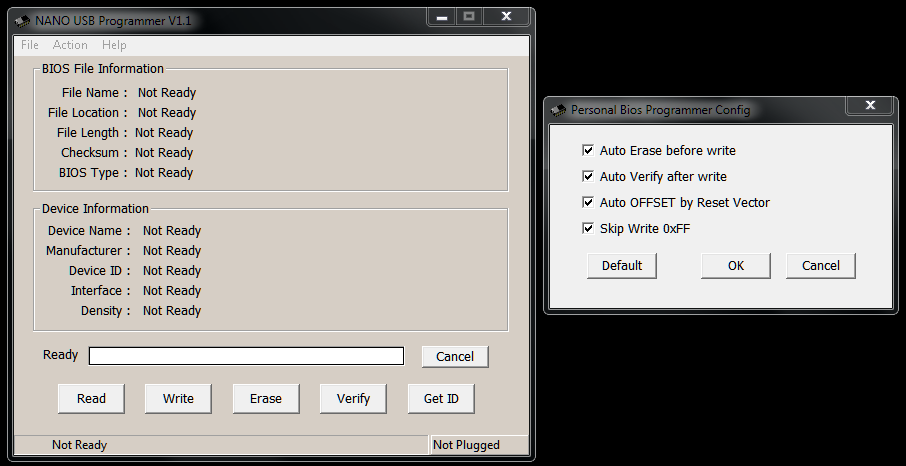 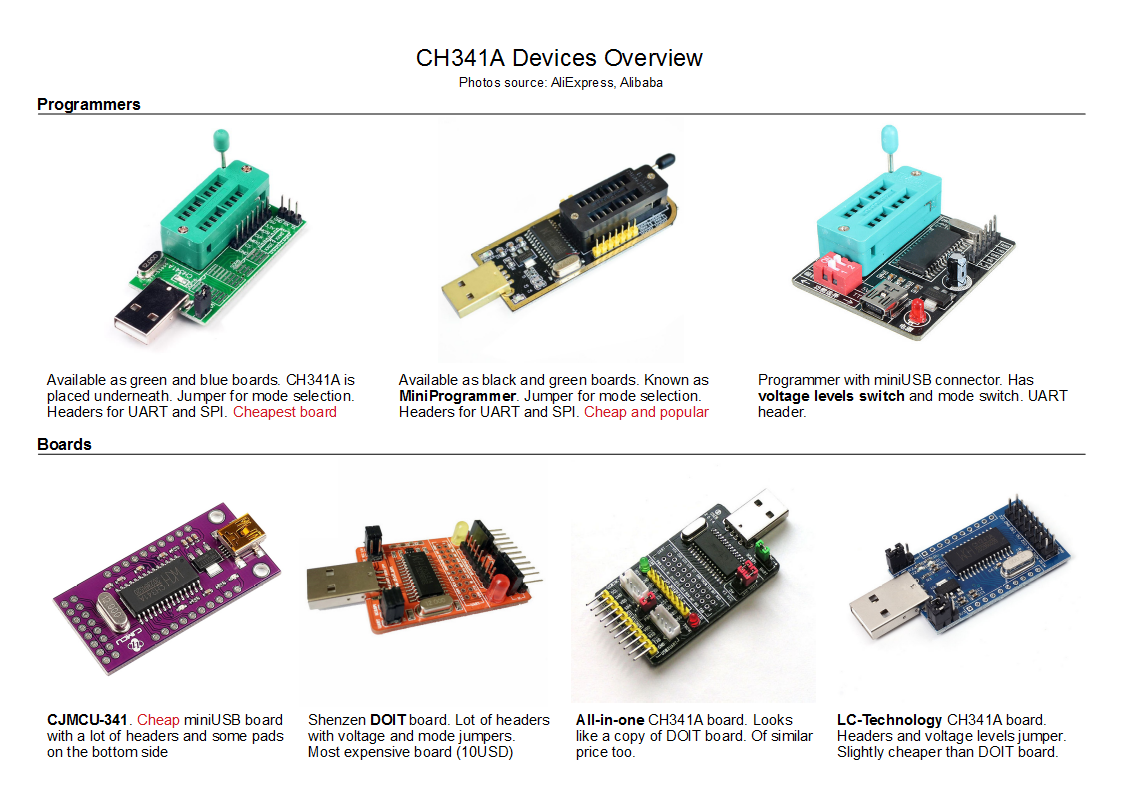 There are also some flash tools for Linux, Android or MacOS.

The only requirement is to know the Version of BIOS chip, you wanna flash.
So look first on surface of the chip. If there’s a product label with BIOS version number, then you have to carefully remove it. Don’t scratch the surface.
There should be manufacturer and model designation.
MiesMosel August 23, 2018, 11:07am #9

Looks like I will get the 2nd one (mini programmer). On Saturday I will go for a short vacation with my family and come back 30 of August, if programmer does not arrive until tomorrow, only next weekend will have time to care about it. I am very-very curious about possible result as you guys gave me so many bios versions

We’ll get you sorted out on both boards for sure once your programmer arrives and you have time to play. I hope you’ll be willing to test Ivy/SB codes at same time for me on the Z68 too once you’ve seen you can use programmer and safely fix anything

@Girjaman
I’ll get the same programmer (black version) & clip cable in the next days.

But there are a lot of questions to do it right. Maybe we should open a new thread for that in the future.
If we know the chip, then we also have to know the voltage (5V or 3.3V or ??) for that.

For our programmer there’s a voltage mod to 3.3V, if nessessary. It depends on BIOS chip version. 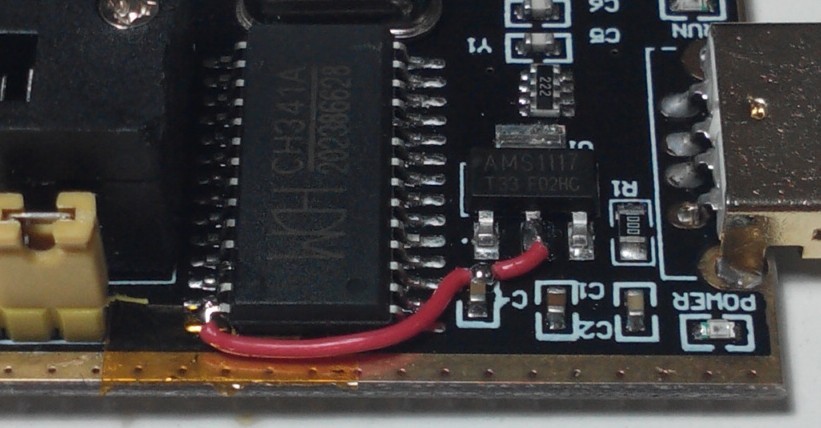 Hello!
My USB Programmer is here since some days. It seems to be having no problem with Voltage @3.3V.
Chip vendor+series was recognized, then I choosed 1 model of 3.
All versions of Mini Programmer could read the BIOS-Chip (DIP8).
Open & Nano Programmer don’t function with that black miniprogrammer.

The SOIC8-clip-cable is too thin, so I wanna buy an additional DIP8-clamp/cable.

I don’t know at the moment, which driver works on Win10.
regards

Thanks for your info @MiesMosel and driver. Why do you feel it’s best driver vs CH341SER.EXE (Serial mode/cable usage) & CH341PAR.EXE (Program chip mode) from manufacturer like these - http://www.wch.cn/products/CH341.html

Please link to new better test clip cable when you find, thank you!

Please link to new better test clip cable when you find, thank you!

CH341SER is only used when programmer is in serial mode, which you need to move jumper on programmer to serial mode first, then it would be recognized.
Link me to cable you purchased if you don’t mind, I’ll see if I can find similar on ebay, thanks!

I bought this DIP-8 IC Test Clip on AliExpress.com yesterday I with 5% discount.

Yes, I am not sure how CH341SER mode works but I think somehow it can be used with BIOS file open/read and then write to board chip via cable (without BIOS inserted into slot on programmer)
Thanks, that cable and clip does look more robust. Do you think it easily fit soldered 200mm SOP8/SOIC8 BIOS chip though, they show use on usually socketed style BIOS DIP8 300mm

When I first saw that, I put usual cheaper SOIC8 clip on DIP8 BIOS chip and it only touches inner two pins, outer two pins are not touched at all, and inner pins would be shorted out by all four pins in the clamp only touching those pins.
I guess this is opposite way around, larger instead of smaller, so maybe it would still work and only seems to me like it wouldn’t because I don’t have it in hand to check