I have sourced a MSI 980Ti Gaming X card with a Titan X (GM200-400) core, and the card has 1GB x 12 = 12GB of vram (that is to say, unlike a regular Titan X, it has 12GB of vram despite not having memory modules on the backplate). The vram chip donor in this comes from either a Quadro or Tesla 24GB (which are the only relevant Maxwell cards with 1GB vram modules). That means this card is a hybrid of 980Ti, Titan X, and Quadro M6000, and the BIOS has been a huge pain to me. If I use the stock MSI 980Ti BIOS, the card overclocks fine, but only 6GB of vram was detected since 980Ti was never meant to be coupled with 1GB memory modules. 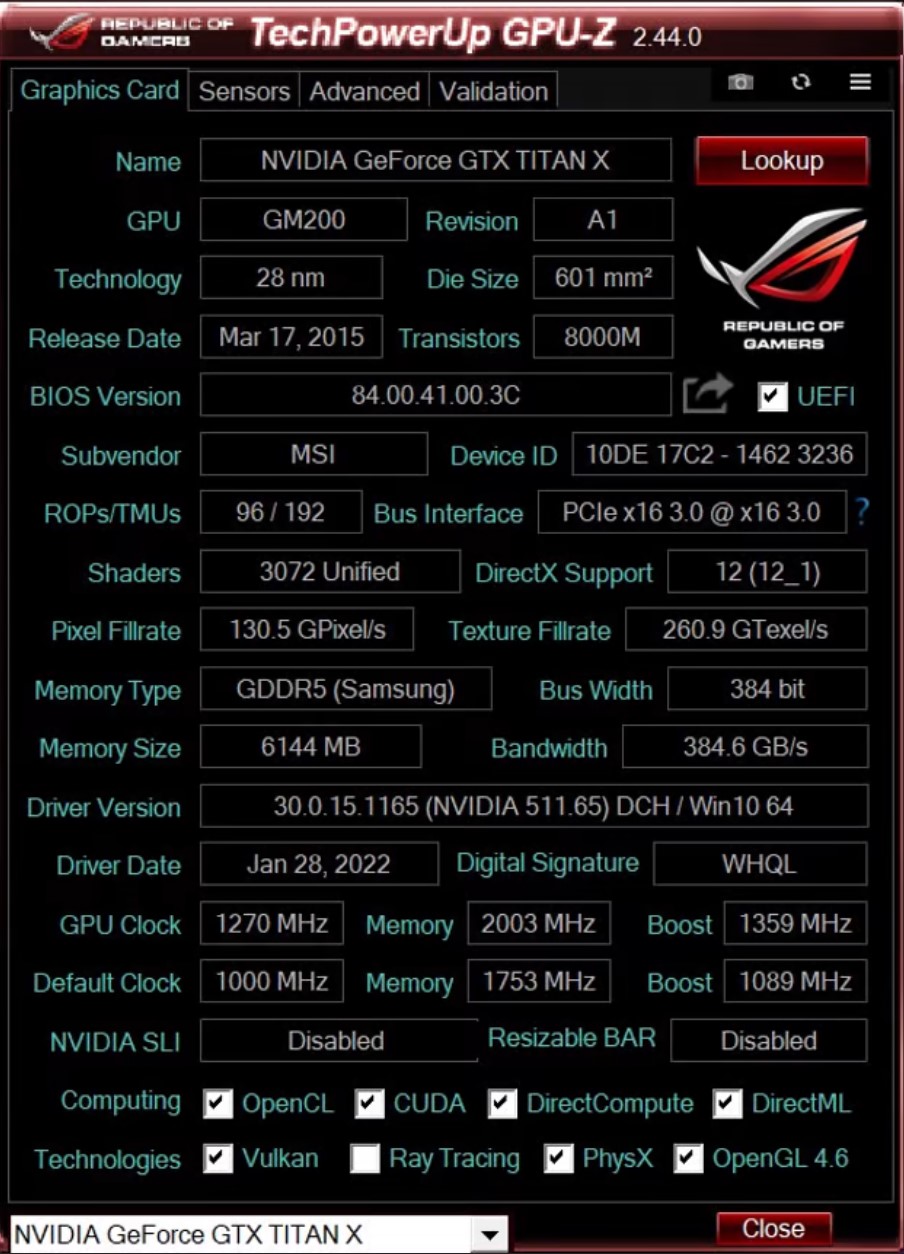 The vram could easily reach 8000mhz at this half-capacity stage. Now, if I flash a regular Titan X BIOS, it will brick the card, but interesting thing arises when I use the M6000 24GB BIOS. The card works with all 12GB of vram detected and utilizable (can be confirmed by launching far cry 6 at 4K max settings lol). 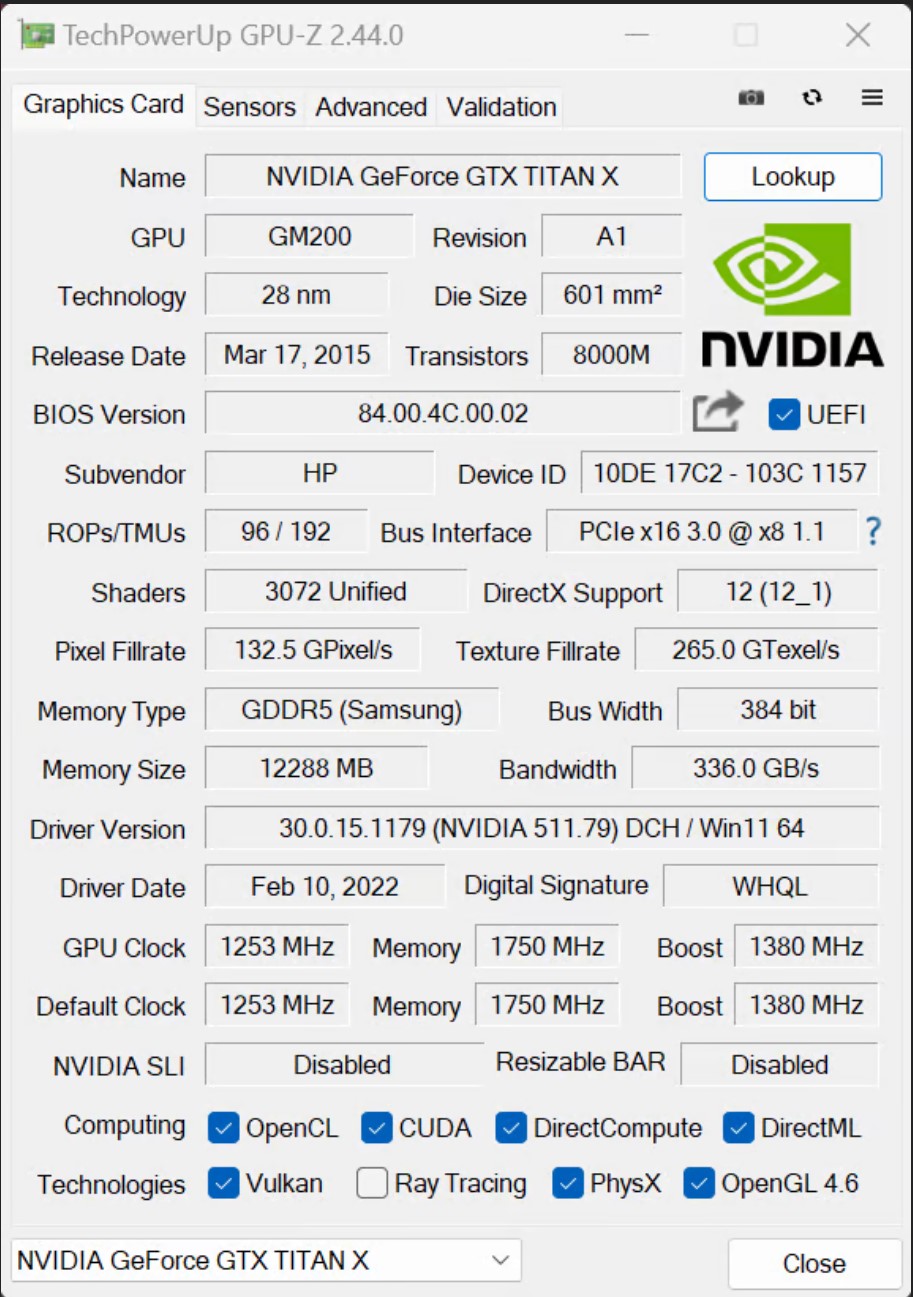 However, as we all know, quadros are heavily locked down to the extent that I cannot change the clock of either the core on vram through software means. That means I must etch the OC settings directly into the BIOS. I have been modifying based on the HP Quadro M6000 24GB available on techpowerup

The first thing I noticed is that there was a mechanism implemented in the BIOS that prevented changes to power consumption. That was easily overcome with a shunt mod. However, the voltage was a huge pain for me to set. After a million trials and errors, I realized that under the Quadro BIOS, the card would not boost above any clock that is associated with a minimum voltage higher than 1.187V. For example, if I have in the maxwell bios editor:
…
Clock 38: 1175.0mv - 1281.3mv/1468mhz
Clock 39: 1187.5mv - 1281.3mv/1481mhz
Clock 40: 1193.8mv - 1281.3mv/1493mhz
…
The card will not boost above clock 39 and will stay at 1187.5mv/1481mhz. That means we are effectively running in permanent undervolting mode. Being a GM200 big maxwell, it occasionally jumps to 1193mv without raising the frequency, but this still severely limits the potential of overclocking since I can easily do 1525mhz at 1.25V on this core in the stock 980Ti BIOS. If I raise every clock to a value above 1.187V, then the card enters some kind of self-protection mode. The voltage would stay, but the core would be stuck at clock 0, which is 324mhz.

Additionally, the vram would only run at 7000mhz, and raising that by even 10mhz causes severe flickering and artifacts. I have set the vram voltage in the BIOS editor to as much as 1.3V, and it seems to have failed to make a difference. Potential culprits are either the vram or ECC (if flashing a Quadro BIOS enables it).

I have attempted hardware-level volt mod, and the voltage controller has since fried two EVC2SXs without any progress on that. I might have done something wrong, but I am saving my last EVC for my 3090.

So here comes the question: how do I either break these stupid voltage restrictions on a Quadro BIOS, or how can I inject support of 1GB memory capacity modules onto a 980Ti BIOS? That is to say, can I add 8Gbit memory support to a 980Ti BIOS?

Attached are the original 980Ti BIOS and the Quadro BIOS. I should also note that the additional voltage sliders are not present for the quadro BIOS. I have posted similar threads on other fora.