It is with great pleasure that I can announce that I was able to successfully get a working/booting Win7 system running on 2x Samsung 256GB NVMe’s in RAID0 configuration.
Specs first: Gigabyte GA-Z170X-Gaming 5, 2x 256GB NVMe’s, 32Gb G.Skill Ripjaw DDR4-3200, Corsair h100i cooling, nVidia GTX760, 2x Samsung 850 EVO’s.
First I had to insert USB3.0 drivers (thanx for these Fernando) into boot.wim so that I can boot up and install from a UEFI USB. I tried different RST ver14 drivers but they all
gave BSOD error 7b on first boot. From past experience I knew this was due to RST/AHCI drivers. I then installed Win7 on my SSD and loaded all necessary drivers. Then I tried
different HDD cloning software. Paragon Hard Disk Manager was the only one that was able to completely clone the SSD on to the NVMe raid. I just needed to load RST drivers
into the loaded PE. It cloned the whole ssd including the uefi boot loader. After many hours booted up to my new system from 2xNVMe in RAID0. Yayyyy…
And then poured me a good shot of 10year old brandy and relaxed. Benchmarks to follow.

@ eroder:
Congratulations for having successfully created a RAID0 array with 2 NVMe supporting SSDs and thanks for your interesting report!
Here are some additional questions:
1. Which NVMe supporting SSD models did you use?
2. How did you create the RAID0 array?
3. Which NVMe driver are you using?
4. Did you modify the mainboard BIOS in any way?
5. Have you installed any Intel RST Software?
6. If yes, what does the Intel RST Console show regarding your SSD configuration? 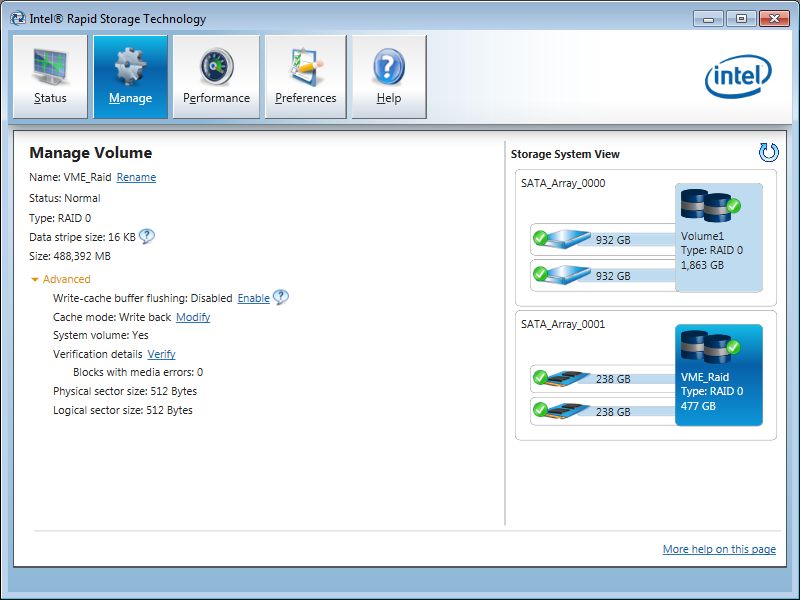 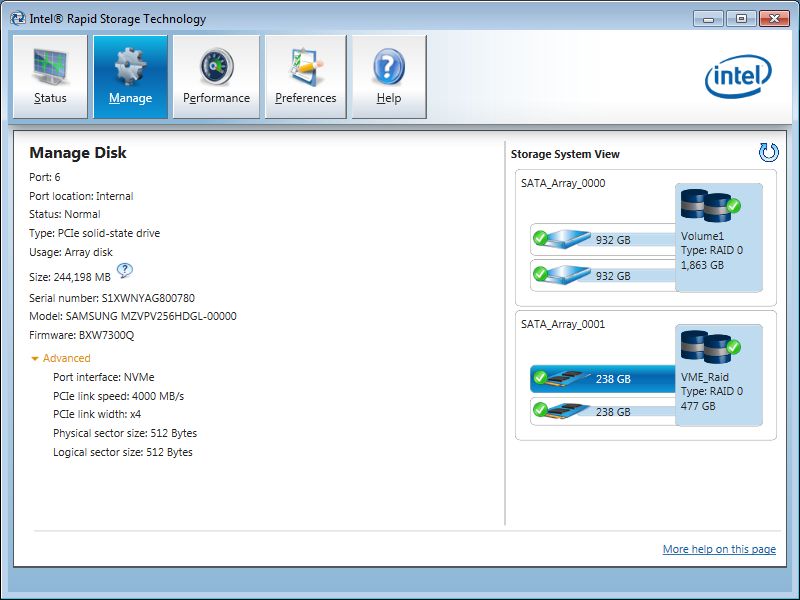 Benchmark. System not completely optimized and some background copying/tasks busy as well 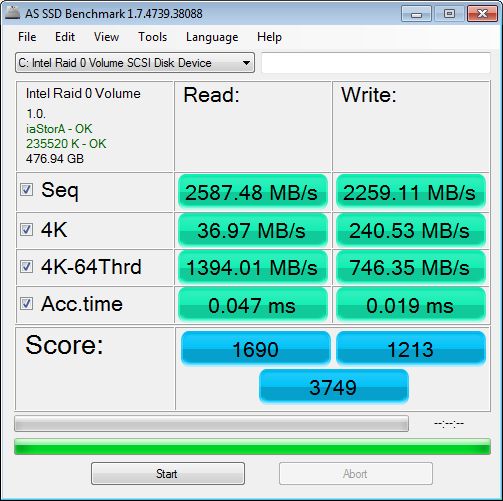 Please disable C-states in BIOS, set the power profile in Windows to high performance and do the benchmark again.
I would like to see how this affects access times.

Please disable C-states in BIOS, set the power profile in Windows to high performance and do the benchmark again.

@ eroder:
Thanks for the quick answers and the pictures, which verify, that the Intel RST Console sees the RAID0 array, where the Samsung SM951 NVMe SSDs are the members, as "NVMe RAID".
Most interesting for me was your report, that you created the "NVMe RAID" array from within the Intel EFI RAID Utility v14.6.0.1029.
Additional questions:
1. Which OS are you running on the "NVMe RAID"?
2. Which Controller names are listed within the "IDE ATA/ATAPI Controllers" and . if applicable - "Storage Controllers" section of the Device Manager?
3. Which driver is the Controller using, which manages the "NVMe RAID"?

Off topic: I have removed the not essential parts of the quoted text from your previous posts. Please stop quoting any post completely. This just blows up the volume of a thread and makes it difficult to find the really new informations.