[Request] How to boost the performance of a Gigabyte GA-Z97X Gaming 7 by BIOS modding?

Getting better now @PitKoz - now, next time all you have to do is edit your post first, instead of making a new reply and then thinking to edit after you post it

You can edit and quote, whatever you want to quote do from a new tab, and then copy paste back over to the tab you are editing. Or better yet, stop quoting stuff, it’s not necessary.
This has nothing to do with what browser you are using, you just don’t have enough tabs open, you can’t do it all at once in same tab.

Performance, across the board, is due to the Spectre/Meltdown patches in the updated CPU mcirocodes, as I mentioned several times already.
None of this has to do with BIOS modules, you wont notice any obvious difference between those modules and different versions.

About 15 series comment, that doesn’t make sense, you didn’t give your text of “I got this answer” and the link provided is a driver thread link (unrelated to BIOS modules, and not linked to any single post or comment etc)

Sorry, No, I don’t think we can proceed with anything yet. The only thing I know for sure is you want old CPU mircocodes into new F8 BIOS, rest is still huge unknown to me or I would have made you BIOS already.

This is a thread within the Sub-Forum named “Specific: Intel AHCI/RAID Drivers”, but not an answer to your question.
All Intel OROM related questions are answered within >this< thread, which belongs to the Sub-Forum named “BIOS modules (PCI ROM, EFI and others)”.
By the way: The question whether a certain BIOS module can be implemented into a certain BIOS, is absolutely irrelevant, because a successful implementation doesn’t mean, that the implemented module will properly work.

And now, the last question, I do not understand, but it is already in F8 BIOS, why after Upgrade from F6 to F8 if the firmware was not changed, the Network Card has changed Dev-id and was recognized as different Hardware.

For me, implementation means: can be written and will work in the system. this two stages, I know that anything can be written to BIOS even virus, or funny screen notes like "I love you" or "you gonna die now", so implementation suggests that it is successfully inserted/written to and response/works properly in the System. This is a question of semantic.

Why did you start a new thread?
Didn’t you promise, that you would post all your questions and comments into this thread, which has been started by yourself?

Just was curious what is happening with the corporation’s plots and how it influences the Computer industry.
And this question is completely not related to the proper setting for this MoBo.
Possibly it shall go to “offtopic”, general discussion or somewhere else,
I am now after 19 h shift… sorry for the inconvenience,
Goodnight.

Hi all,
LOST_N_BIOS
Please proceed with this kind request (if there is an error just let me know):

Thank you in advance,
Peter

[quote="PitKoz"] EDIT by Fernando: Text re-formatted (for better readability) [/quote] Thanks, Fernando, I am not sure yet about NVMe module v.code... how to read it in the system?
And how to upload file in www.win-unattended.de ? I can understand a little German, but have a problem with finding the way, is it possible at all? I have already registered myself to this forum for the purpose that LOST_N_BIOS can not access MEGA.

I am not sure yet about NVMe module v.code… how to read it in the system?

What has the NVMe BIOS module to do with the Intel RST RAID ROM v13.5.0.2164?
If you want to know the version of the currently in-use Intel RAID ROM module of your mainboard BIOS, you should hit CTRL+I while booting or enter the BIOS and click onto the point "Intel(R) Rapid Storage Technology", which may be listed within the "Storage Configuration" section.

And how to upload file in www.win-unattended.de?

You can only download files from my personal account at the Server of Win-unattended.de (by simply clicking onto the download link), but you cannot upload files into it.

@PitKoz , I will use stock BIOS, you flash with Qflash only (And FPT for ME downgrade, if necessary later). Taiwan Server 2 has nothing to do with anything here.
@BIOS should not be used for any BIOS flashes, except ones where you are forced to use it due to Qflash application update, and even in those cases I suggest you flash from DOS Instead.
There is no NVME Module in BIOS v13.5.0.2164 - only standard AMI NVME Module, but this is given, no NVME Mod needed since BIOS is NVME compatible from the start
I don’t need any files uploaded, I already have these BIOS files.

I am using RAID 1 in this config with classical SATA3 6gb hard disks, I see there is a chance to get the full Trim ability.
so do I need RSTe or RST? Will RSTe make problem with HDD? or will be fully compatible?
I know for now, that I have to disable raid for SSD to make it visible. So probably this what I have now is not compatible with RSTe.
Let’s try RSTe, but if you can send me as well the bios for return to this what I have now, or it is not needed as I can flashback to standard F8 Gigabyte without any problems?

@PitKoz :
The TRIM in RAID modded Intel RST RAID modules only support RAID0 arrays, but no Raid1 ones.

@PitKoz:
The TRIM in RAID modded Intel RST RAID modules only support RAID0 arrays, but no Raid1 ones.

Good to know, I am using RAID 1 or 5 for 20+ years, with SCSI from Adaptec, it is more/was more simple with SCSI, my Adaptec controller with 2 TB in 4 RAID 5 with old archives is still present on my former Workstation I use it as well for printing, as XP drivers for printers are superb to nowadays Microsoft limited drivers for big format printing, and speed for this "Disks" is 3.6 GB solid so sometimes quicker than contemporary machines.
15 years old, fully working PC with XP and Windows 7 32 bit pair of Xeon 4.6GHZ ;).
For my case, the security of data is the major and first priority, I can not lose my archives nor project files I am working with.

Yes, if the related storage driver supports TRIM.
These are the details regarding the Intel AHCI/RAID drivers:

in my Configuration, the question is about Marvel SATA HDD under Marvel, it has v1.2.0.1039 drivers.
IDK what OROM or firmware it has in the BIOS,

We will see how it works when the new BIOS will be there.

I am working on BIOS for you now, and noticed this >> looking at F8 microcode versions, they are not Spectre/meltdown version (Too old, all are 2015 or earlier), but still maybe causing the performance hit you noticed.
ME FW is not too much different (both 2014), and also can’t be any Spectre or Meltdown fixes in there either, it’s too old. The reason they must be blocking going back to F6 from F8 officially, is probably due to something Intel wanted them to not allow anymore (like Non-K OC or something like that)
But, it still could be the microcodes or ME alone causing what performance losses you noticed. Only a stock test with those two items alone changes between F6 and F8 would let you know if it’s this, or some changes in the actual BIOS aside from those.
This would require several tests to find out, ME change out only then test, microcode change out only then test, both changed out then test. << Do you want to do that, or do you just want to go back to F6 base BIOS and update it’s RST modules + Disable ME?

What CPU do you have anyway?

I will still send you F8 with F6 microcodes and V13/V14 RST (Two different BIOS) + ME Disabled in both, then after that you can make final decision which you want to use F6 or F8
If you want to go back to F6 it’s OK, we can update that one too. Right now, I would send you those F8 mod BIOS I just mentioned above, but waiting on a reply from Plutomaniac about disabling the ME For 9.1 FW (Aside from that BIOS are done and ready now)

Thank You guys really for your efforts!
Really appreciate this, just forgive me being a bit erratic but
I am here early morning like today, not fully awake,
or late evening after a too-long workday.

What CPU do you have anyway?

there is I7-4790K,
all is easily overclockable to 4.7Ghz and 2000 for memory
without any special increase in power consumption.
All-time I have disabled (and with drivers removed) IME,

the performance on F6 modded just to see SSD in Pci-x
was excellent, this we know, all Except! network card.

In F8 BIOS there is an error in somewhere within code: as in processor upgrade section,
the upgrade to 4.6 is present 2 times in the drop-down list.
I would have to take a photo from the BIOS screen if it helps to find out what I am talking about.

And I agree to experiment with any version you will prepare.

I got the sense that I had the right feelings about Intel, MS, and Giga conspiracy theory

All-time I have disabled (and with drivers removed) IME, the performance on F6 modded just to see SSD in Pci-x
was excellent, this we know, all Except! network card.

I will still send you F8 with F6 microcodes and V13/V14 RST (Two different BIOS) + ME Disabled in both, then after that, you can make a final decision which you want to use F6 or F8

I thought that v14 is prohibited for z97x for RST OROM, but as I said I am barely controlling now my RL and … you know always may be mistaken.

You’re welcome! Don’t feel bad or worry if you are tired, I am sleeping all the time while I am here helping

Thanks for CPU model, I only asked so I could get it’s CPUID (306C3, as I figured) and see which microcode you were using

Sorry, I don’t know what you mean about “upgrade to 4.6”? Is this some generic BIOS overclock setting you are referring to?
If yes, it maybe just cosmetic bug in the name, you shouldn’t use those anyway if this is what you mean, it would not always be same for you CPU as all others and would probably use way more voltage than necessary (Like Auto voltages, don’t use that either, when overclocking)

Not sure what you mean about this either >> Intel, MS, and Giga conspiracy theory << If you meant what I said about the reasons they would try to tell you that you can’t downgrade BIOS, this is common and affects all motherboard brands.
They found out how to overclock non-overclockable CPU’s (Non-K OC, and Non-Z OC) and Intel got mad, so they had to remove possible methods in later BIOS

Great the higher the better

Sorry, I don’t know what you mean about “upgrade to 4.6”? Is this some generic BIOS overclock setting you are referring to?

It is used to pre overclocking for later with INTEL EASY OVERCLOCK in Windows system
I will restart the system and take a photo. 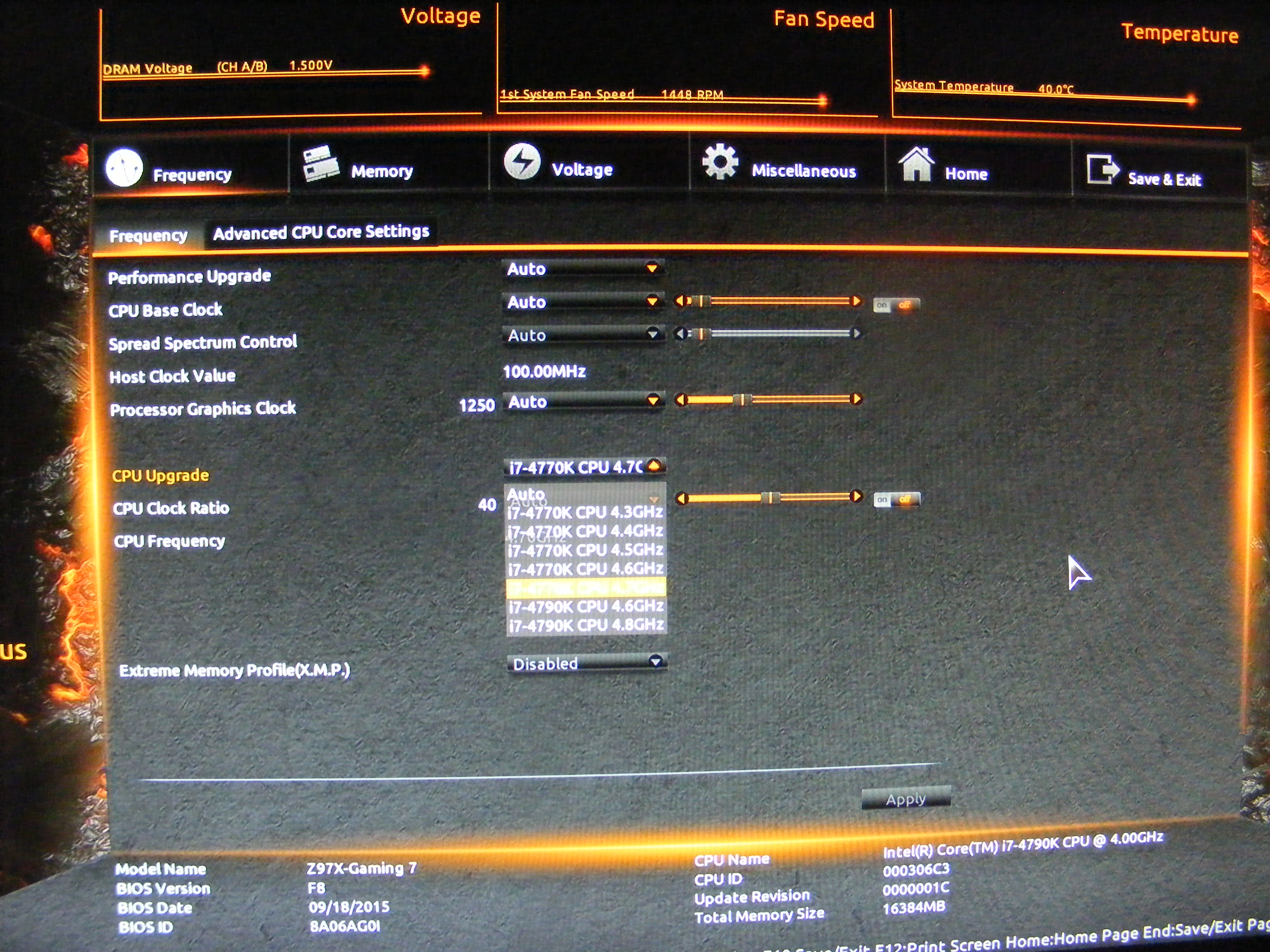 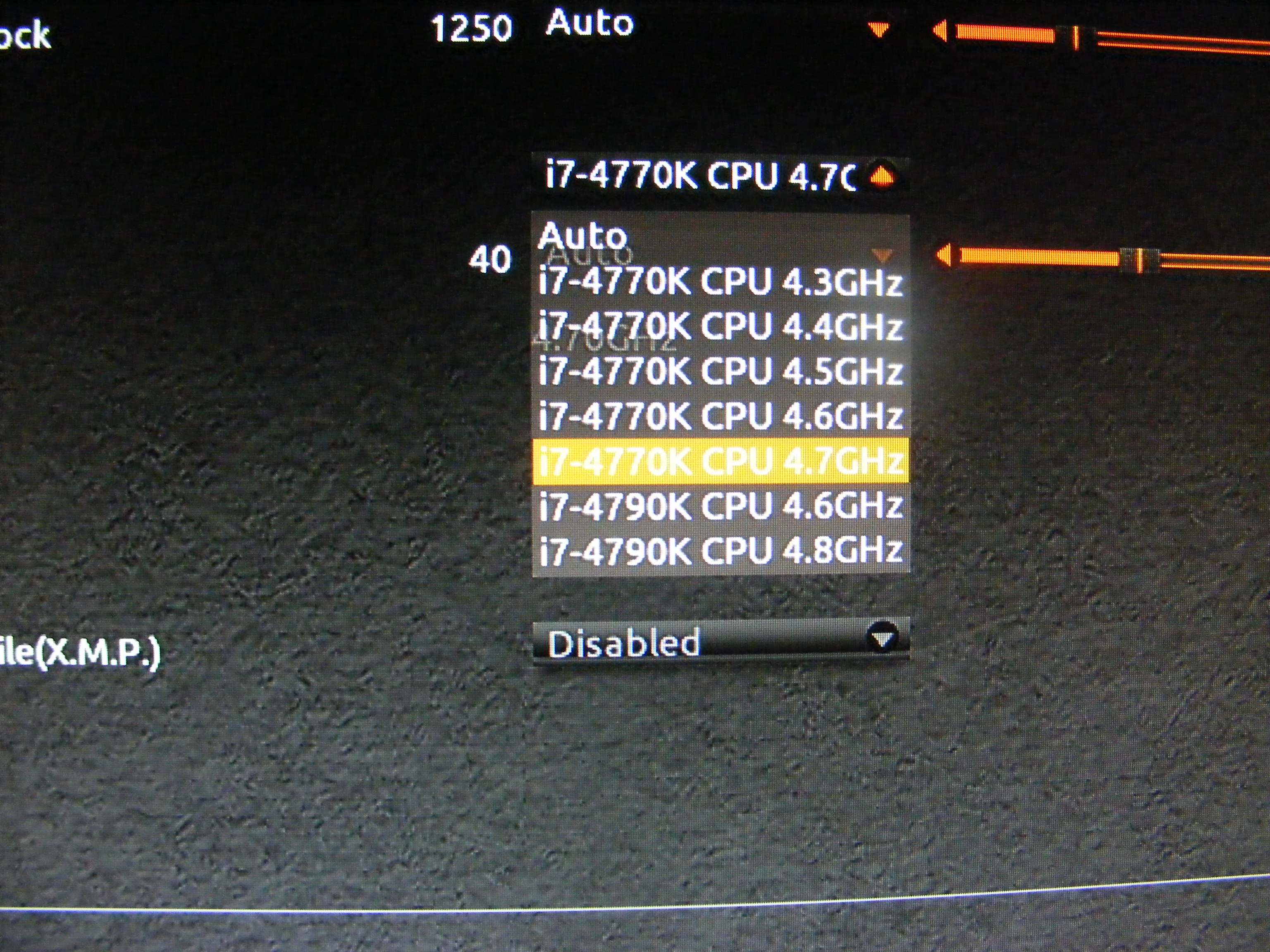 Yes, usually higher is better, but not always

Fernando does a lot of testing in that area, he’s probably compared V13 to V14 before, you’ll have to look around and see.

Thanks for the images, I thought that may be what it was. I’ll look in BIOS and see if that is just a cosmetic mistake, or if the profile is duplicated, or what’s really going on there (I’ll compare both and see)
That’s probably already corrected in some beta BIOS after F8, but I’ve never looked for newer BIOS than F8. I’ll look into that for you later today too.