I need the xeon 1680 v2 support with other xeon and the NVME for the x79 Asrock extreme 9, I am stuck on the official bios p4.0. I believe that this modded BIOS has been made before. please share the file!

after testing, I will re-host the file later for other people in need. 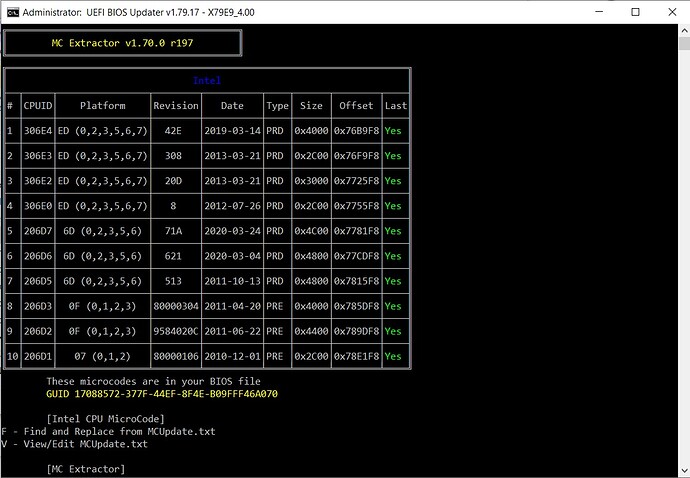 not sure if Security Flash Check has been removed…

for the NVNE support, I am lost by myself…

if my motherboard is bricked, how to rescue? 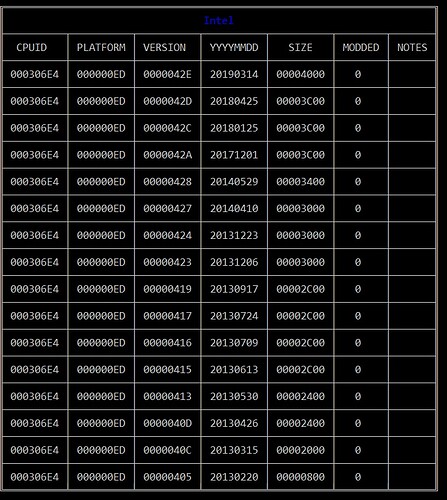 who made the microcode update???
is there a history version modification report , log to see the differences??

for the NVNE support, I am lost by myself…

Try this, it got all the mcode or LGA 2011, but wont gurantee it 1680v2 would work.
Also added NVMe support + Rebar support if gpu supports rebar. No Paddings were created or destroyed. As Always, DWYOR

thanks!!! why do you have more CPUIDs than mine??
your file works on your mobo??

thanks!!! why do you have more CPUIDs than mine??
your file works on your mobo??

Because i add all (might unecessary) lga 2011 mcode as you could see, only 1 of them were not the latest but that wont mind. you gotta test the bios file i sent on your own and see if the mcode has changed from the original (before flash, take a pict/memorize the Mcode version, and after flash, compare it).

For asrock, i did non X79 mobos, more on LGA 1155 and 1150 platform (yes i recently just modded bios for mobo replacement on office PC using B75M-GL) and it work. i wont gurantee you it would work, you would need CH341A programmer to reflash the bios directly.

did you try on a x79 asrock extreme 9?
the bios before the modification was based on the 4.00 version originally??

did you try on a x79 asrock extreme 9?
the bios before the modification was based on the 4.00 version originally??

Yes this one from pure bios 4.00 i downloaded from asrock, and i dont have the board to test it out.

You could flash this one either using intel FPT or using instant flash from asrock if you want. Im just telling you that i’ve done several asrock bios mod for nvme and others and it worked.

Please guide me for the purchase of a professional and reliable kit please.

Please guide me for the purchase of a professional and reliable kit please.

I dont understand what do you mean with guiding you, but any CH341A would be a nice to have if anything failed :>

better dump your whole bios before flashing, so that everything would do fine if bios corrupted

I mean there are so much CH341A kit on the market, can you advice me about a good one to buy?

Any of them should be fine. i personally use this kind: 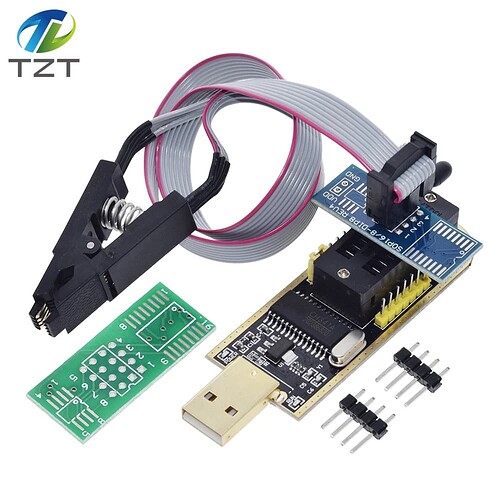 Since the asrock boards in my possesion use DIP-8 (ZIF Packaged, socketed bios chip) chips, so i could just take it off and plug it to the programmer and allign it the same as the programmer instruction for the pins.

I have the same CH341A device, so was able to backup and restore it a couple of times now, to capture my original overclock screen-shots via the BIOS… Using your new BIOS update file… It works very well, booting my Windows 7 image off NVME after converting from MBR to GPT using the tools on the web. I also recently (last week) received my 2nd hand Xeon 1680 v2 which also works flawlessly with this new BIOS. ~10% more CPU for free and enabling PCIe3.0 on my NVME and graphics card.

Job well done, thanks again. I registered here just to report that this one works properly. Not sure what rebar is though, but I’m sure if others do - it’ll also work for them. I’m very happy with what’s here.

It did work correctly? please post a screenshot of CPUZ > Mainboard Tab and send it here

Did normal latest bios could boot 1680v2? or it must use my modded bios to do so?

Also congrats in having to boot off nvme

Not sure what rebar is though, but I’m sure if others do - it’ll also work for them.

Resizable BAR is an optional PCI Express interface technology . As you move through a world in a game, GPU memory (VRAM) constantly transfers textures, shaders and geometry via many small CPU to GPU transfers.

Basically making the CPU access the vram buffer as a whole, for example i have 64GB of GDDR6W, my cpu could read/access the vram buffer fully at 64GB instead of default 256mb buffer. Without Rebar it would be defaulted at 256mb, which has been the standard for years, while resizable bar have been around 2008, PCIe 2.0 times, but it isnt even used until now. 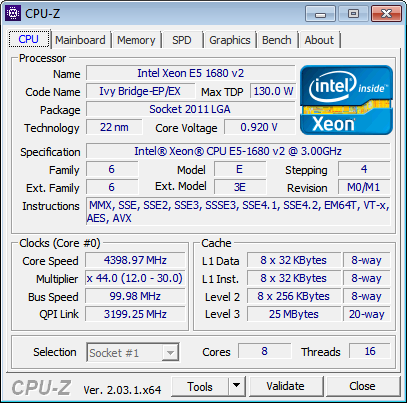 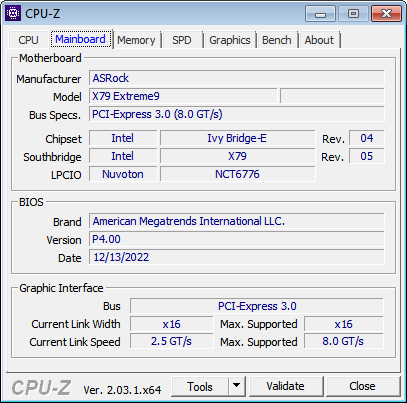 Did normal latest bios could boot 1680v2? or it must use my modded bios to do so?

Unsure, since I moved to nvme first a month ago using my old i7 3930K, I can’t go back to the old BIOS now without losing the ability to boot. I only got the upgrade CPU a few days ago, so I never had the chance to see if it was supported already.

I love to see some work done here on this forum… 12/13/2022, such piece of “ART”
I personally think that more can be done, lets say… “Koekieezz International LLC (Made in INDO)” and Version K4.01 as bios.