Today dear people we will be taking a look at a little known memory manufacturer as far as us westerners are concerned, Klevv are a manufacturer of not just memory but other components like SSD and SD cards as well they have been around for about 6 years now so long enough to know they won’t just disappear overnight. Today in this people’s review we will be looking at the 3600MHz 32GB kit of Klevv Bolt X KD4AGU880-36A180U, will the kit be as fast as a lightning bolt as Klevv claim I wonder? Let’s find out. 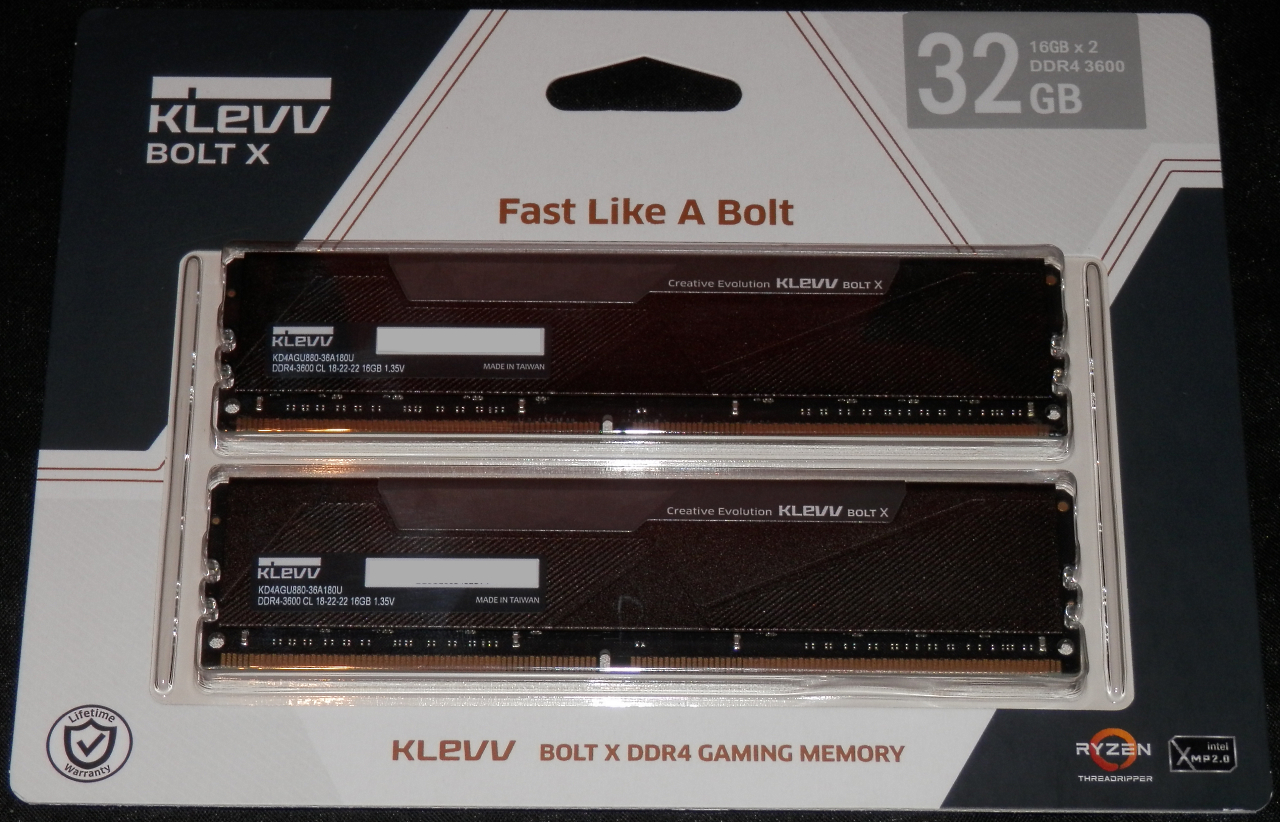 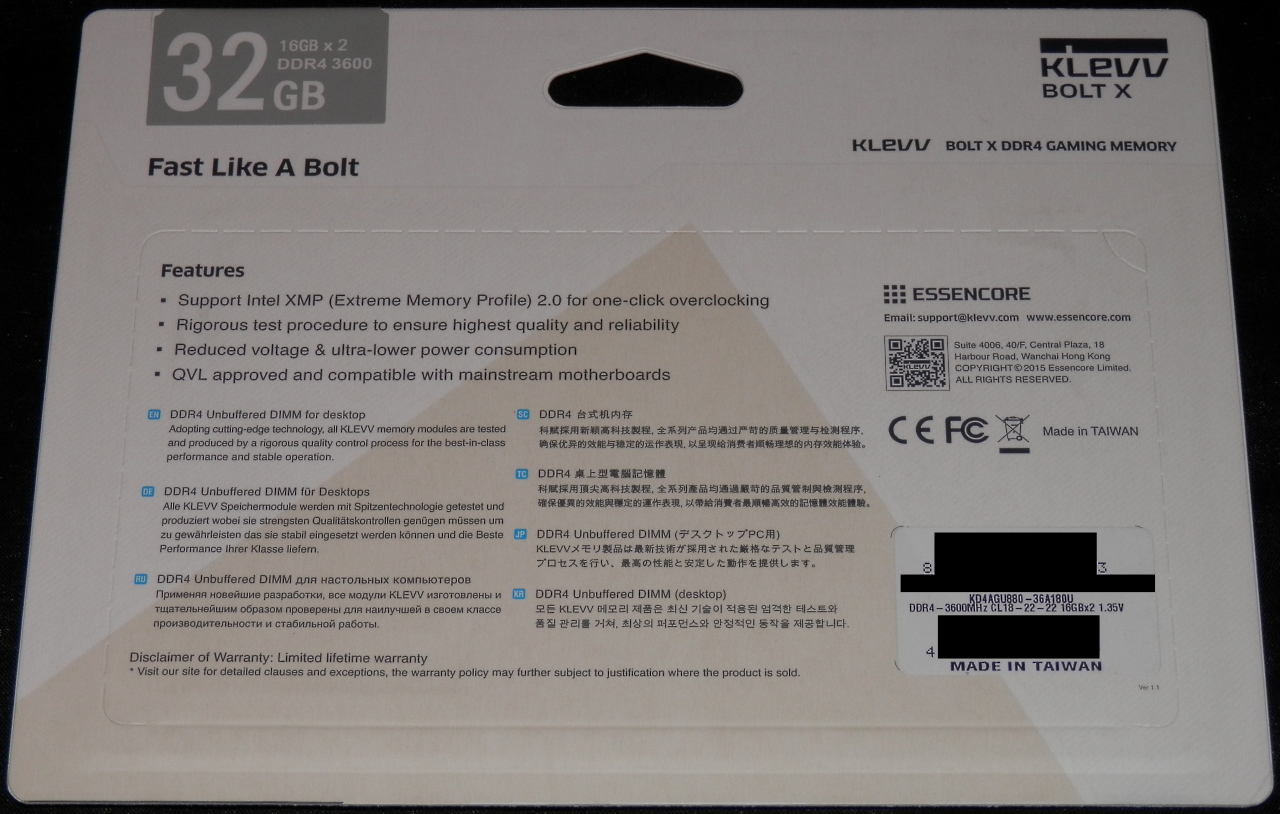 At first glance there isn’t anything that particularly stands out about the Bolt X, I’ll give it to Klevv for doing what they can here for the most part the packing feels very nice with the finish it has, there is some useful information printed at least such as letting you know the kit has been rigorously tested on a multitude of boards, is Ryzen optimised, timing information and has XMP profiles. There’s not much else Klevv could say or do here so at least they tried.

A closer look at the memory literally doesn’t reveal much the modules are very business-like in appearance, not really what you would consider gamer styling or orientated despite the claims on the packaging. The heatspreaders I did notice are a bit thicker than what most other manufacturers would give you so that’ll add a bit of robustness. Those stickers at the top of the heatspreaders isn’t something I’m in favour of though they will inevitably begin to peel over time, leave the modules blank Klevv or have a heatspreader design with your name and product line stamped on the heatsink not these nasty, nasty stickers.

With the introductions done with let’s have a look at the specs for the Klevv Bolt X. 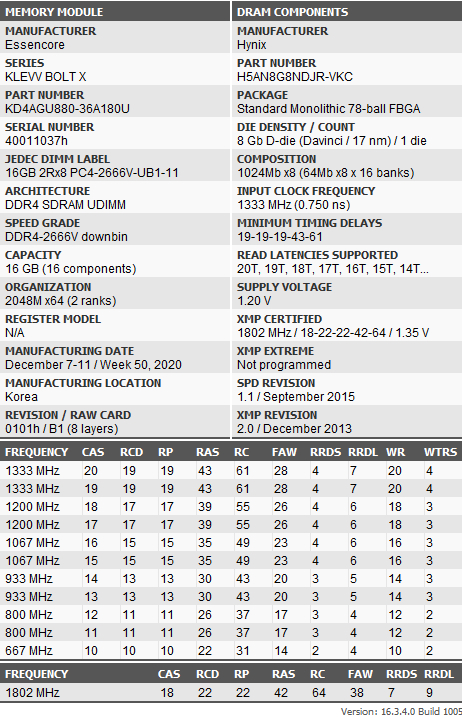 A look at Thaiphoon Burner reveals the juicy details about these modules, 18-22-22-42-64 timings at 3600MHz 1.35v isn’t particularly exciting but here is where the good news comes in, the kit costs just £127 which for a 32GB 3600MHz kit is very good indeed and on top of this the kit uses Hynix DJR. This certainly makes up for the initial a bit lacklustre timings it’s also worth considering that most memory kits with these timings or similar will set you back around £150 so there is certainly a lot of incentive for a lot of people I would think to be looking at this kit of memory from Klevv.

To keep results as accurate as possible the XMP profile for 3333MHz is loaded and memory straps adjusted manually while Gear Down is left at [Auto].

At 2666MHz and 3000MHz it is par for the course really considering the timings. I do wonder why Klevv did not program these modules with a profile for 3000MHz or 3200MHz using much better timings though the modules are certainly capable of it and it would have provided a much needed boost out of the gate, things definitely felt a bit sluggish to me at these speeds in testing due to the timings.

Things are starting to pick up at 3200MHz and particularly 3466MHz as frequency catches up to the timings and things start to balance themselves but the numbers in AIDA are still nothing to be applauding the results are meandering, plodding along. You can get better results from a 3200MHz kit simply with out of the box tighter timings than what you are seeing here at 3466MHz from the Klevv Bolt X even though at this frequency we are still on the XMP profile for 3333MHz. 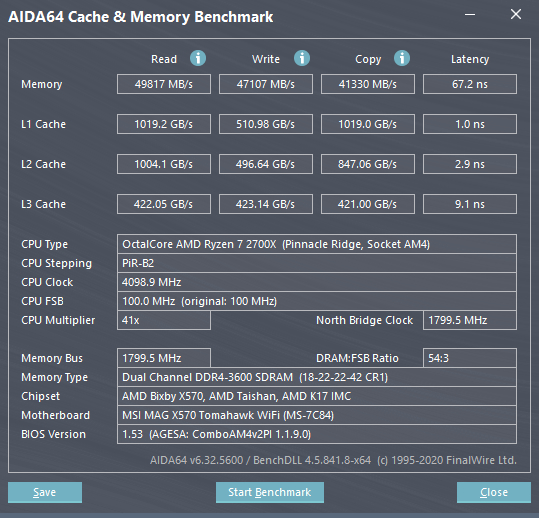 For the final AIDA test the 3600MHz XMP profile has been enabled and the results we get, while once again being nothing special also aren’t that bad as frequency has largely caught up to timings we are seeing similar synthetic performance here as to what we would see from most other memory kits at this frequency. Even the 3600MHz G.Skill Ripjaws V and the G.Skill TridentZ kits both with 16-19-19-39 timings would not be doing much better than this and both of those are about £200 compared to the humble price of the Klevv Bolt X at £127. 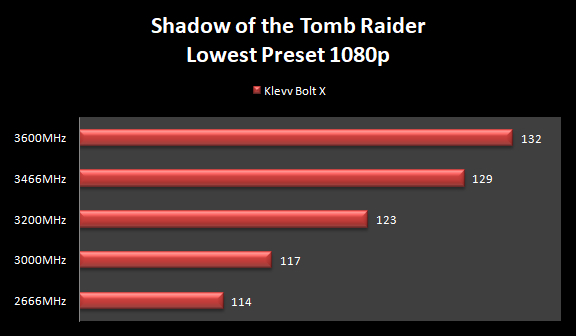 A lot of memory reviews like to include results at resolutions like 720p but you won’t see that from me I believe at 1080p the bar is set low enough already lower resolutions only serve to artificially inflate numbers and results above 1080p are equally of little use as you shift most of the work to the GPU and away from the system at 1440p or higher so this is the bar in my book system memory has to strut its stuff, fall or fly, that is the only question.

There isn’t much to analyse here the chart does all the talking plotting a clear almost completely linear upward trend, a relatively large jump is observed at 3200MHz which should really be expected by everybody there’s a reason it’s considered the baseline frequency to have with Zen. I wasn’t expecting to see quite such a jump from 3000MHz though clearly those lazy timings at lower frequencies are having an impact and verifies what the system felt like when testing at lower frequencies.

At the upper end of the table the jump in average FPS from 3200MHz to 3466MHz clearly shows how much Zen loves high memory frequencies as FPS continued to climb with each and every frequency up to 3600MHz.

Overclocking is going to be a bit different today, most of you will be aware but for those that aren’t Zen performance tends to peak at 3600MHz memory frequency the only real world benefit in a kit of memory rated higher than this on Zen is for the added luxury of being able to tighten timings, in theory, better than you could on a 3600MHz binned kit. With this in mind the aim here is going to be to see just how far memory timings can be brought down on the Klevv Bolt X while retaining some level of stability at least and keeping as high of a frequency as possible.

Here we have the final results, disabling Gear Down, making some manual timing adjustments and switching to 2T gave a significant copy and latency improvement in the AIDA results rivalling even the stock 3600MHz results at 3200MHz while 3466MHz allowed the memory to go toe to toe with the stock 3600MHz results and surpass them for copy and latency tests. 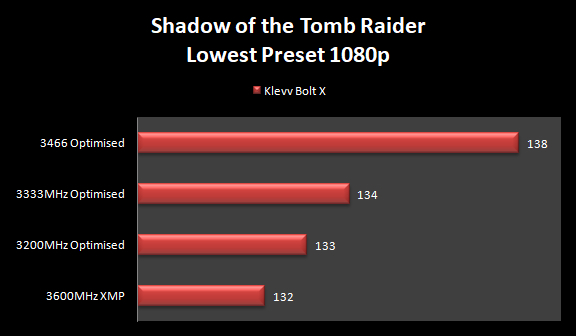 Using Tomb Raider one final time shows impressive gains for the Klevv Bolt X, my time has been limited for finding the optimal frequency to timings ratio but these results say it all outperforming the stock 3600MHz results, as average as they are, at 3200MHz and 3466MHz is still an impressive feat and I get the distinct impression this kit has room to spare still as these results have been obtained at a mere 1.37v.

It’s not often I get a nice straightforward conclusion to write in a people’s review but this one is just that with no unexpected curveballs thrown into the mix. For the price of £127 that the Bolt X is for 32GB at 3600MHz it is extremely hard to find anything negative to say about them what they might lack in visual flair and style they make up for with price and performance after some manual tuning.

I don’t think we can have any complaints here can we? The modules have the often criminally underrated Hynix DJR and some robust heatspreaders while also being low profile. It’s nit-picking but I will mention again about that sticker on the heatspreaders it’s not very nice, Klevv, do away with it.

Another easy one, out of the box performance is a bit pedestrian due to lax timings at low frequencies but as that frequency increases the modules do somewhat grow into their timings I would expect to see Klevv improve on these very relaxed timings at low frequencies in future however to allow the modules to put up a better fight and allow for a snappier system. I’ll also use this space to mention that I did examine XMP profile timings for both the pre-programmed 3333MHz and 3600MHz profiles and both used exactly the same timings which goes some way to explaining the results, no doubt this was done for compatibility but Klevv have been too cautious here if you ask me.

The Klevv Bolt X certainly aren’t much to look at but you can’t really say they are horrible to look at either and if you are specifically looking for memory that is compact but looks sleek still the Klevv Bolt X definitely meets that criteria. 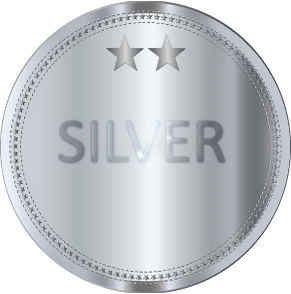 In closing Klevv has done well with the Bolt X line, cheap for a 3600MHz kit and enough about them to make you seriously consider is a more expensive kit really worth it.