Has anyone by chance found a way to install Nvidia drivers for the RTX A4000? On Windows 7 64bit? On Nvidia’s driver page they have Windows 7 drivers 473.62 for the consumer Geforce RTX 30** cards but for the workstation cards there is no Windows 7 drivers to be found. Modding the inf file should work since these cards are both based on Ampere or is there something else that needs to be done? I tried editing the inf of the drivers but Windows 7 will not accept it.

I just tried that now, but it still wouldnt accept it. I’m going to try installing Windows Server 2008R2 to see if it will accept the driver running that instead of Windows 7 Pro.

Edit: Just tried Server 2008R2 but it wouldnt accept the driver, the same behavior as Windows 7 pro. Its strange that Server 2012 R2 has official RTX A4000 drivers because its based on Windows 8 but there is no Windows 8 drivers at all for the A4000. There must be a way to get the driver working on Windows 7 though if they are somehow still supporting Server 2012 R2, not sure why it doesnt install manually on Windows 7/2008R2.

Edit 2: Wow so i just tried installing the “officially supported” Server 2012 R2 drivers on a Server 2012 R2 installation and i got the same error as with Windows 7. It seems Nvidia is offering an official driver for an operating system that actually isnt supported. 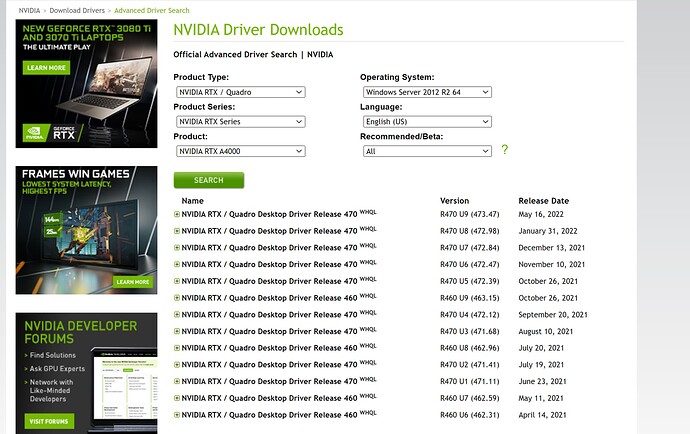