Hello.
I recently tried to make a modded Mobile Intel 4 Series GPU driver for Windows 8.1 and 10, since Intel decided to make anything above 15.16.5.64.2021 incompatible with those operating systems.

While making the modded driver though, I encountered one issue; I never managed to get Windows to load the driver successfully.
The driver installs, and then the Intel setup tells me to restart. But once I restart Windows, I get no HW acceleration.
I know it’s not the driver since Device Manager tells me that it just can’t verify the signature, but also because .2021 works fine (Albeit with some bugs because of its age).

Once I checked Device Manager after the driver install, it complained about a Code 52 error: 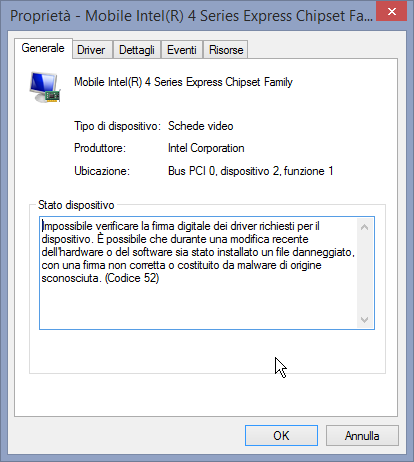 Here are the steps I followed to self-sign the drivers:

3. After that, I created a catalog file of the GPU driver using inf2cat from the WinDDK, which in the end returned “Catalog generation complete.”:
inf2cat.exe /driver:“driverdirectory” /os:7_x64 /verbose

I’m sure I didn’t miss anything important, but Windows still complains about the signature being invalid.
If there’s something I missed, is it possible to help me out with this? I really want to get my laptop up and running again with it, and I might also release it here if it works.

EDIT:
Oh and of course, I installed the certificate in both “Root” and “TrustedPublisher”!

Because I don’t want it to work with Windows 10 only, plus I’m using the Windows 7 Driver Development Kit.