I have an Intel z170 motherboard now that I have installed my old components on after a motherboard and CPU upgrade. I was running Intel RST on my old hacked bios z77 motherboard with the NVMe drive (Samsung SM951 256GB) as the OS boot drive and using a 60gb SSD to accelerate a 2TB programs drive. This ran fine with no problems with the speed of the NVMe drive (RAID mode is needed to accelerate an HDD using an SSD). Now that I have the z170 setup I tried the same drive configuration, however the NVMe performance is hit hard, switching to AHCI brings the performance up to par, but this means I cannot accelerate the 1TB programs HDD and that makes it painfully slow. I have installed the Samsung drivers for the NVMe drive, but they only load in AHCI mode, when I switch to RAID the standard Microsoft driver loads instead. Does anyone have any ideas as to how I can get full performance from my NVMe drive in RAID mode on the z170 motherboard?

Here is a benchmark: 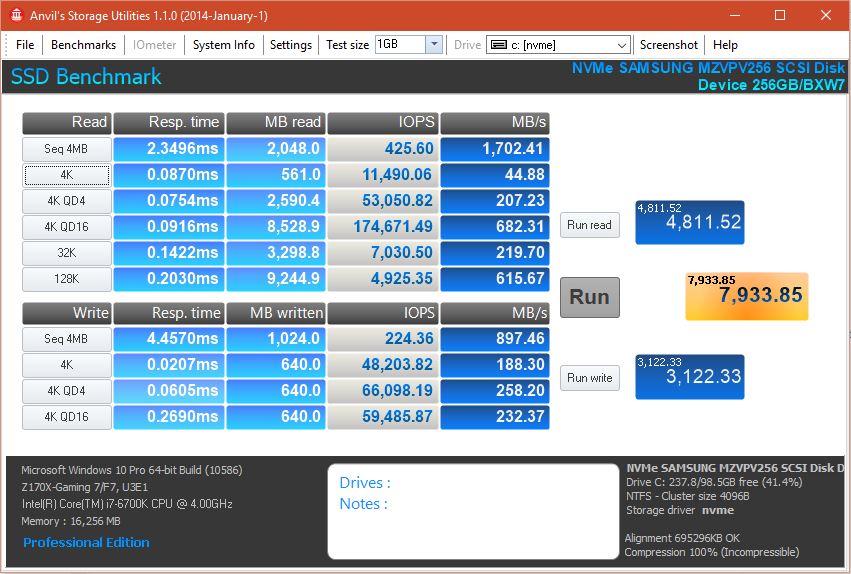 Benchmark on the old system: 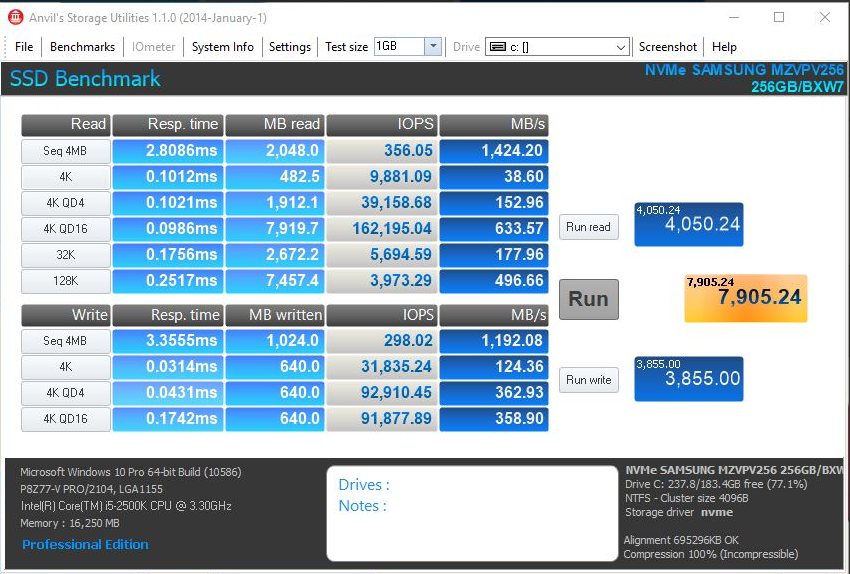 EDIT by Fernando: Screenshot with the old benchmark results replaced by an attachment (the original image did not show up)

@skank :
I am sorry, but I cannot help you. You will have to decide, whether you prefer the best possible performance of your Samsung SM951 as boot drive or the acceleration of your data HDD by using the 60 GB SSD.
The Intel(R) Smart Response Technology (using a small sized SSD as cache for a HDD) has been developed at a time, where bigger sized SSDs were very expensive. Furthermore this Technology has been designed for the acceleration of the system drive (containing the OS). It is absolutely unusual to boost by the SRT the performance of a HDD, which just contains storage data.

Hi Fernando, thanks for replying to my message. I understand what you are saying, however I have used SRT for the last 4 years with great effect on my programs drive, it accelerates the launching and level loading of the games I play off that HDD as well as making some smaller programs I launch frequently much more responsive. I don’t use this HDD for storage at all, I have another HDD for that. I have managed to increase the performance by doing a reinstall of all the drivers, the SM951 no longer show up as SCSI now. Also I noticed that the benchmark results fluctuate a lot. However the write performance is still down by about 200MB/s on sequential write over the old results, that is not such a big deal so I will keep it in RAID mode so I can use SRT. Thanks again for your attention.