I have successfully installed the drive into the M.2 slot on the mobo and transferred files over to it and the machine does boot up from that drive. So far so good. The only problem I am having is getting the Samsung driver to install-it says Microsoft 2006 when I check the details. I have tried updating it from the device mgr, etc but no luck. Do I have to change settings in the BIOS to get it to install the current Samsung driver? Thanks

The only problem I am having is getting the Samsung driver to install-it says Microsoft 2006 when I check the details. I have tried updating it from the device mgr, etc but no luck.

I bet, that you have tried to update the driver of a device, which is listed within the "Disk drives" section of the Device Manger and this was wrong. All Disk drives are managed by an in-box MS driver resp. INF file and cannot be replaced by any third party driver.
Solution: Expand the section "Storage Controllers". There you will find a device named "NVMe Controller" (or similar). Do a right click unto it, choose the options "Update driver software" > "Browse my Computer…" and navigate to the folder, which contains the Samsung NVMe driver.
I am sure, that you will succeed this way (provided, that your NVMe SSD is a Samsung one).

aha but I have treid just what you suggested and it says the driver is the best one for the Samsung 960 Pro even though I went through looking on my computer where I downloaded the version 2.1 driver to after unzipping the file from Samsung and it still will not do it???

followup-i did previously find the NVMe storage controller and it still says that the best one is installed but it is from Microsoft and dated 2007!!!

it still says that the best one is installed but it is from Microsoft and dated 2007!!!

This message is misleading.
If you want to replace the MS driver by any Samsung one, you have to force the installation by using the “Let me pick…“ > “Have Disk“ option.

okay-IT WAS DOWNLOADED AND WHEN I TRIED TO DO IT BY SEARCHING, IT WOULD NOT INSTALL SO I WILL BURN IT TO A DISC AND TRY IT THAT WAY-THANKS

@BRUNO_3
You should succeed to install the proper NVMe driver for your 960 PRO device as I have done on my X99 PC: 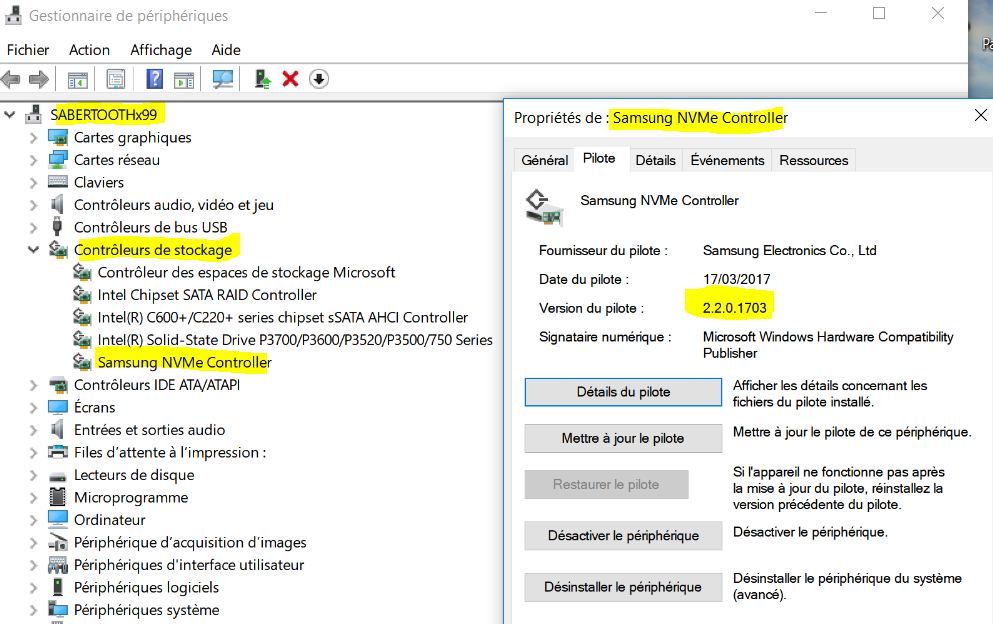 I have tried the mentioned suggestion and it still says the NVMe is not installed install the device then do the driver???But it does show up as a bot drive choice???hope this helps and also, the downloaded driver is not an inf file it is an .exe file???

Have you tried installing the drivers using their installer?
Only inf files can be installed through device manager.
The Samsung exe file is pretty complex, I failed to extract it.
Just run the exe file and it should install the drivers.

yes I have tried using the .exe installer and it still says the deivce is not installed yet it shows up as a boot drive selection???

Yesterday I got a PM from the Forum member Bruno_3, where he wrote, that he was able to solve his problem by simply disabling the Norton Antivirus program before trying to install the NVMe driver.
Since he didn’t follow my advice to publish his solution into this thread, I have done it myself.

I had difficulty getting the driver to install and it was because Norton security had to be disabled for the time it took to install the driver. Then everything went smoothly

@BRUNO_3 :
To be able to boot off the NVMe SSD you should enter the BIOS, go into the "BOOT" section, change the order of the bootable disk drives and save the new BIOS settings…