I recently bought the SanDisk Ultra Plus (http://mp3support.sandisk.com/downloads/…d-datasheet.pdf) to speed up my computer. However, I am only getting around 370MB/s (should be 530MB/s according to the data sheet) when using the benchmarking software crystaldiskmark. I get higher results when connecting the SSD to another computer that I recently built. Therefore, I do not blame the SSD’s firmware or quality but are looking for a potential bottleneck that is limiting me. My first guess is that it is the SATA 6Gb/s ASM1061 controller that is part of my motherboard. I already flashed its firmware to 0.951 (thanks again Fernando for helping me out with that one!) which got me to the 370MB/s that I have now. I also tried to update the drivers, but that caused a BOD so I am currently using the standard windows drivers. My question is whether there is any other possibility that might be holding my SSD back or if there are modified drivers that do not cause a BOD. All relevant info is summed up in the attached picture.

If you have any ideas please let me know! 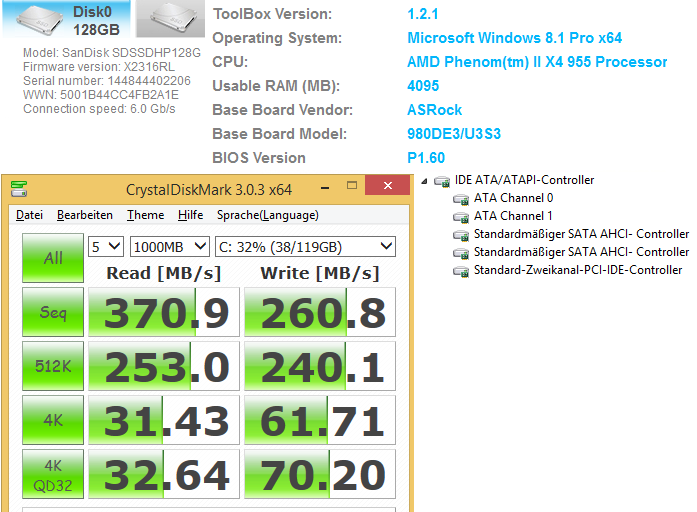 I suspect, that it is the ASMedia SATA AHCI Controller, which is responsable for the unsufficient performance of your SSD.
It is well known, that even an Intel SATA2 (3G) port of an Intel system may be faster than any ASMedia SATA3 (6G) port.

I guess there is no other way then than upgrading to a new mainboard? :S

I guess there is no other way then than upgrading to a new mainboard? :S

Have you tried to switch off to the Intel SATA port? I don’t know how old is your mobo, actually what mobo do you have. Does it support 6g/s ?
Another solution is to put two SSD into RAID-0 on the Intel port like I recently did. Mine is x58 board so only support 3g.s. This forum has good info on how to enable the TRIM for it. I think the write speed is reported high because of enabling the write cache. But overall I feel it is faster and also booting is faster once I don’t need the Marvell port. 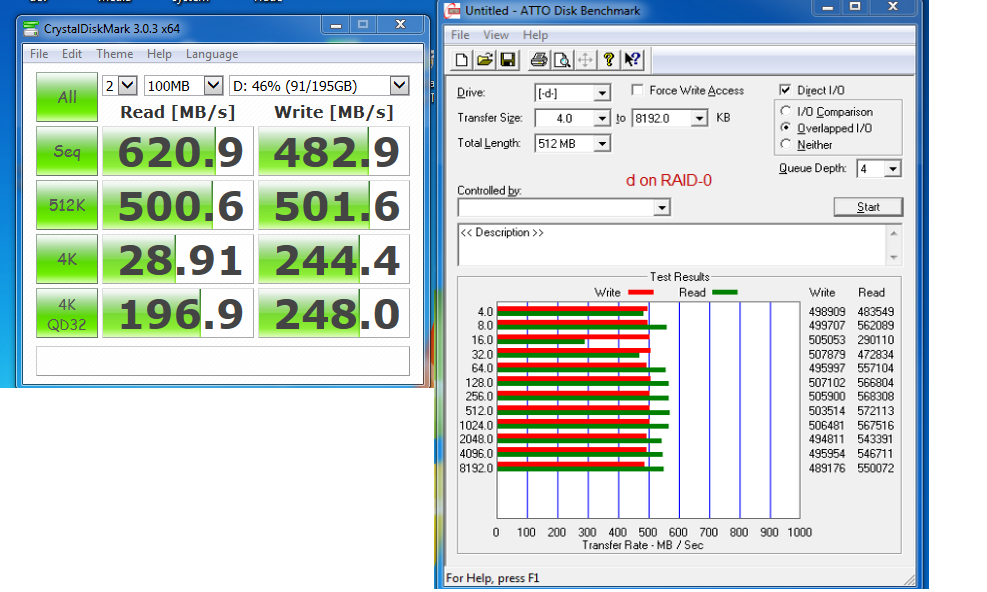 Have you tried to switch off to the Intel SATA port? I don’t know how old is your mobo, actually what mobo do you have. Does it support 6g/s ?

According to his benchmark picture he has an ASRock 980DE3/U3S3 mainboard, which is an AMD chipset one.
This mainboard has 6 AMD SATA2 ports and 2 ASMedia SATA3 ports.

Are you saying that SSD may perform better using Win7 and that my CPU as well as my ram are a potential bottleneck as well? Also I tried to use the latest drivers from asmedia but those caused a bluescreen…

Windows 8.1 x64 with 4GB RAM is just fine. There will be no difference with Windows 7 and especially by installing x86 OS and then using tricks (useless tricks) to show 4GB of RAM. Obviously, he needs x64 OS. Either way, that’s irrelevant to the problem.

may be 8.1 but i would go 7 that is having same qualities and is lighter plus more used [ like xp ]