HI, need help I have mini PC (ECS LIVA ZE) base on Apollo Lake N3350 want to installed with Windows 7 64 trough USB FlashDisk but got problem, Itallation media doesnt recognised any HDD installed but in BIOS is detected well, is ther any work around to make my HDD detected by Win 7 64 installer?

@kapoldes :
Welcome to the Win-RAID Forum!
All SATA connected HDDs should be automaticly detected by the Win7 Setup.
Questions:
1. Which OS are you running now?
2. Which HDD model is within your Mini PC?
3. How did you create the bootable USB Flash Drive, which contains the Win7 Image?
4. Which Controllers are listed within the “IDE ATA/ATAPI Controllers” and “Storage Controllers” sections of the Device Manager (I need just the exact names)?

@Fernando :
very much thanks for the answer
1. Which OS are you running now?
This device LIVA ZE Come without OS installed and doesnt mention support windows 7 but i believe it’s because Intel not allowed use Old OS on their new device, because i really need windows 7 64 I try to find ways to Install in on my mini PC
2. Which HDD model is within your Mini PC?
SSD SATA Plextor 128 GB
3. How did you create the bootable USB Flash Drive, which contains the Win7 Image?
create use apps from ASROCK to make my USB work
4. Which Controllers are listed within the “IDE ATA/ATAPI Controllers” and “Storage Controllers” sections of the Device Manager (I need just the exact names)?
This I cant give because no any OS installed on my mini PC or there another ways to check the name?

EDIT by Fernando: Unneeded fully quoted post replaced by directly addressing to the author (to save space)

@kapoldes :
The installation of Win7 onto your system may be possible, but this requires the knowledge about the details of
a) the system drive (I doubt, that it is a HDD),
b) the Controller, to which the system drive is connected and
c) the interface and protocol, which it is using.
This is what I found at the ECS Support site: 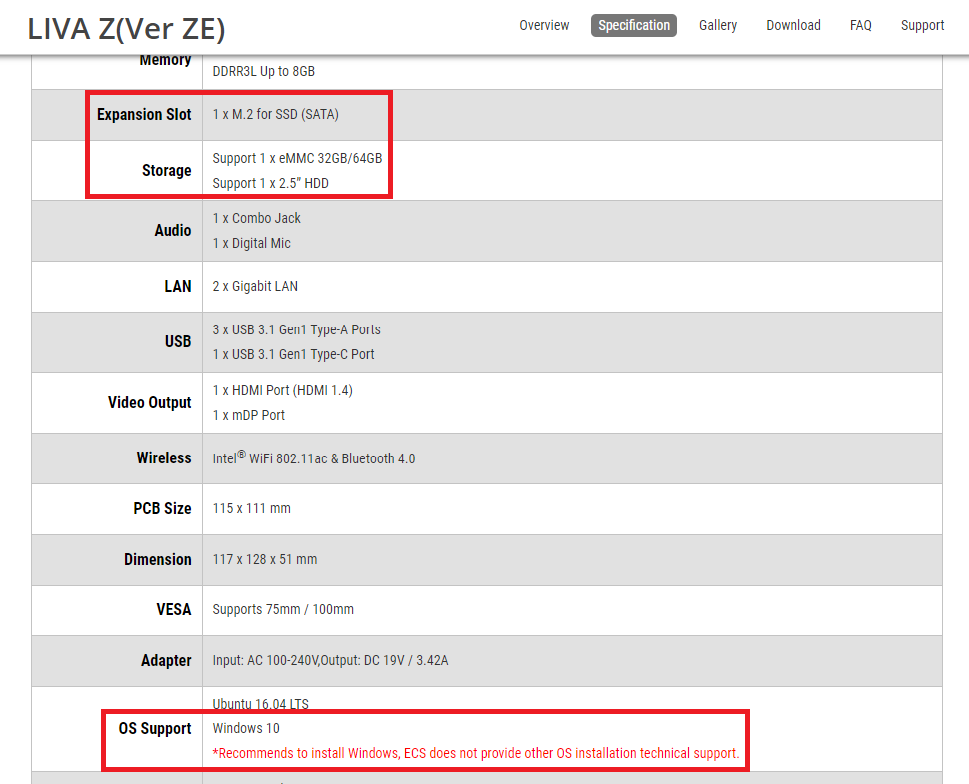 My tip: Install Win10 and post screenshots of the Disk Management and the Device Manager (with opened “IDE ATA/ATAPI Controllers” and “Storage Controllers” sections).
Then I can tell you, whether resp. how you may be able to get Win7 installed.

Got It and here the screenshot 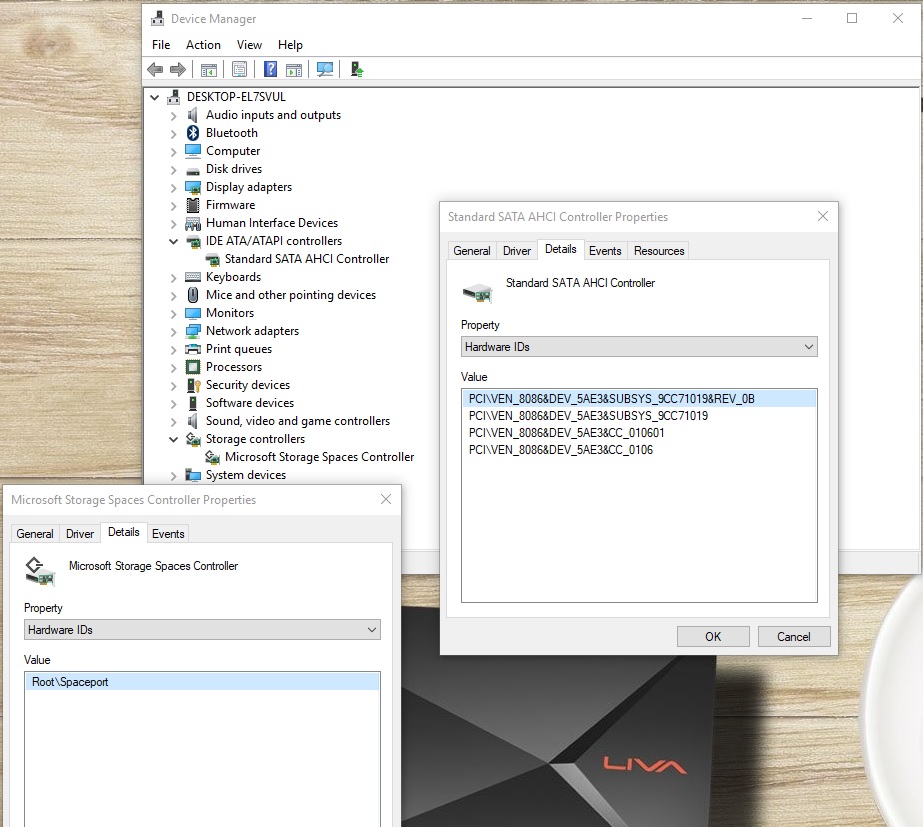 Yes I believe this mini pc can run windows 7, because before i facing USB problem and right now is fixed and stop with this problem (storage problem)

The installation of Win7 onto your system may be possible

I really glad to hear this

@kapoldes :
Thanks for the screenshot of the Device Manager, but where are the details of the Disk Management?
Your report, that the Win7 Setup was not able to detect the system drive, indicates, that the Win7 in-box AHCI driver doesn’t support your on-board Intel SATA AHCI Controller DEV_5AE3.
The problem is, that the Intel RST AHCI driver, which have been mod+signed by me, do support it, but may not be accepted by the Win7 Setup due to the missing WHQL stamp. 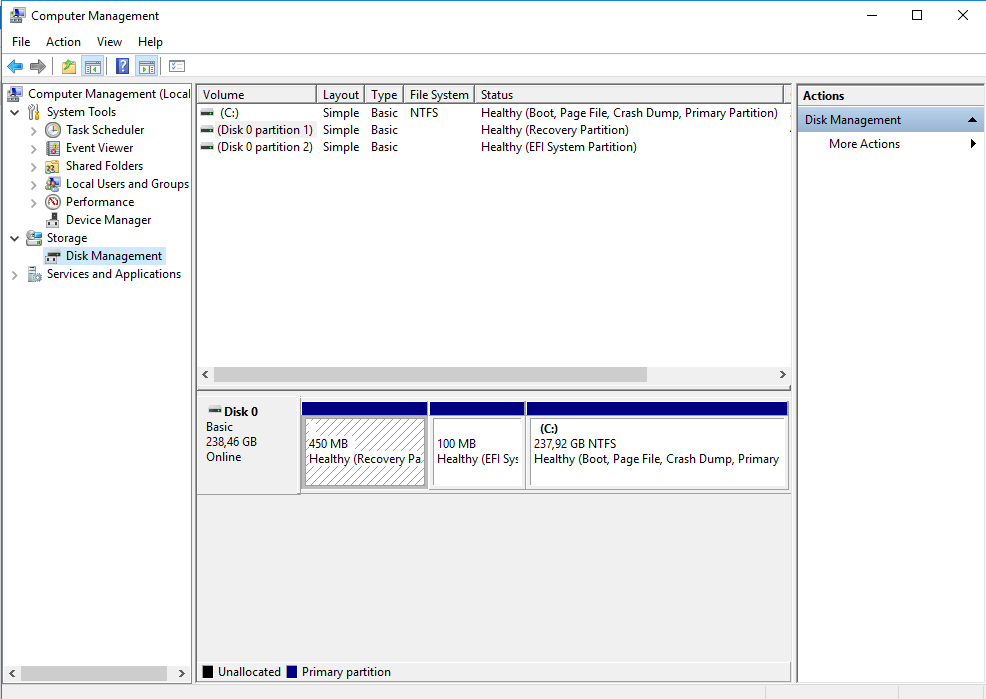 Yes the problem is how to insert WHQL onto Win 7 installer, because when i try to update the standart driver with yours is work after merge WHQL from yours to

@kapoldes :
Thanks or the screenshot of the Disk Management, which verifies, that your system contains just 1 ca. 250 GB sized Disk Drive. This is strange, because this is what you had written before:

Yes the problem is how to insert WHQL onto Win 7 installer, because when i try to update the standart driver with yours is work after merge WHQL from yours to

There was a Forum member, who reported, that he/she was able to get a mod+signed driver running from scratch after a fresh install of Win7. As far as I remember, he/she integrated the related driver into the BOOT.WIM and INSTALL.WIM of the Win7 image, booted off the USB Flash Drive containing this customized image and were able to get the OS copied to the target Disk Drive. The problem was, that the Win7 Setup couldn’t find the target Disk Drive anymore after the first reboot, but the related user solved it by rebooting off the USB Flash Drive, using the “Repair” option > “Advanced Options” and loaded the mod+signed driver again.

Thanks a lot for suggestion, finally the hardware vendor send me a BIOS to make Sata and M.2 recognized by Windows 7 installer now i can install without add storage driver. its weird but its work

I need the bios too, because i’m passing by the same problema, could you send this bios?

You may need to send @kapoldes a message, hopefully that will get him email notification of your question.

I spent all day trying to resolve this issue, but without success