I’ve been beating my head against the wall for the past two days trying to figure out what’s wrong with my system. I recently bought a new 4tb storage drive and noticed very poor performance in Windows 10. I initially thought it was the drive until I decided to test it on another system(WIN 10) and in the same system in OSX(I’m using a PC that also has an OSX bootable drive). The results I’m seeing in OSX and the other system are what the drive should be gettting, but in Windows it’s less than half the write speed, and one quarter the read speed. FYI, I’m on an X79 Asus system(Rampage IV Extreme). After noticing the issue, I realized all my mechanical drives are running slower than they should, but my SSDs all run at their rated speeds.

Here are some of the things I’ve done to try and figure out what’s going on:
- Disabled Intel Raid and just ran AHCI mode - I was running RAID because I have a RAID 0 array for video editing(not boot drive)
- Tried at least 6 different RSTe (I didn’t try RST 11.xx because I read that I would need to do a clean install of Windows)
- Tried matching in the Bios ROM to the RSTe by modifying my BIOS
- Tried every SATA connection on my motherboard, SATA III and SATA II - Even the ASMedia ports give me poor results
- Tried different cables
- Reformatted drives and Zeroed them out
- Disconnected any extra drives or peripherals
- Tried the Windows default driver in AHCI mode

I didn’t try a clean install of Windows on this system yet since I’m hoping to avoid it. My current system runs in UEFI mode, but I’ve tried using CSM for boot storage when I tested different ROM module versions. I’ve attached 2 photos to show you the different speed results I’m getting.

Edit: Here’s an HD Tune test result from my girlfriend’s computer with the same drive I used in the other tests. http://imgur.com/3c3VLav 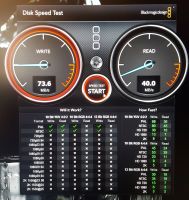 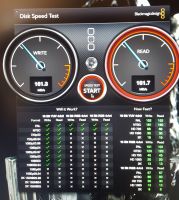 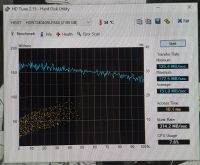 It is not easy to help you, because you obviously have a complicated system X79 chipset configuration (RSTe vs. RST mode, HDD vs. SSD and AHCI vs. RAID).
What I cannot understand is, why you decided to use a 4 TB sized HDD instead of one of your SSDs as bootable system drive.

@kundica:
What I cannot understand is, why you decided to use a 4 TB sized HDD instead of one of your SSDs as bootable system drive.

Sorry for the confusion, I’m not. I’m running the OS on a Samsung 850 Pro. It runs at correct speed as do the other SSDs in my system. The 4tb drive is only for storage but all the mechanical drives are running slower than they should and only in Windows on my system.

I’m current running the v13.1.0.1058 drivers and I also updated my bios with the similar module. It hasn’t improved the mechanical drive performance though.

At this point I’ll probably do a clean install of Windows and see if it resolves my issues. Other than that, I’m not sure what to do. If I can’t find a solution it might but time for me to update to a newer chipset or maybe switch back to running OSX as my main OS.

Thanks for the reply.

The 4tb drive is only for storage but all the mechanical drives are running slower than they should and only in Windows on my system.

Have you already tried to change the SATA port, where the HDDs are connected to?

Have you already tried to change the SATA port, where the HDDs are connected to?

Yes. I’ve tried every SATA port in the system with the same result.
Also, one of my SSDs has OSX on it(hackintosh) and all HDDs have much faster(expected) results on the same x79 hardware on all SATA ports.

All I can think of is that some part of my windows install is messed up. I initially installed Win 10 in AHCI mode and used the reboot to safe mode in order to switch to RAID mode. I’ll know for sure after doing a clean install.

Quick update. I did a clean install to another SSD and I’m getting the expected read/write rates on all mechanical drives. I used Nlite to remove the default Win 10 AHCI/RAID drivers and replaced it with v13.1.0.1058 since my BIOS is currently flashed to the same series.

The install that isn’t working correctly is rather new(Feb) so I’m not sure how it got messed up. Perhaps it’s time to install a 950 Pro as my main system drive and start over.