Something a bit different today, you all are probably used to me reviewing mainboards, graphics cards, system memory and the like so to switch things up a bit I decided it was time to do a M.2 SSD review.

Western Digital, or just WD to those of us who have been around long enough to know who people are talking about, are one of the biggest, if not the biggest, storage manufacturers on the planet. Traditionally WD has manufactured mechanical drives with their first attempt at releasing a SSD being less than stellar. With WD not having much experience in manufacturing SSDs they decided to throw their considerable coffers around and purchase some companies that they thought did, one of those companies turned out not to know more than WD, while the other certainly did; SanDisk. Today we will look at WDs first true attempt at giving people a SSD and see if that money spent on acquiring SanDisk was money well spent or not.

Off to the Pictures!

Hoho yes instead of lots of different titles I'm just going with this title and we will band everything together family style like a bucket of KFC and talk about the specifics where needed. 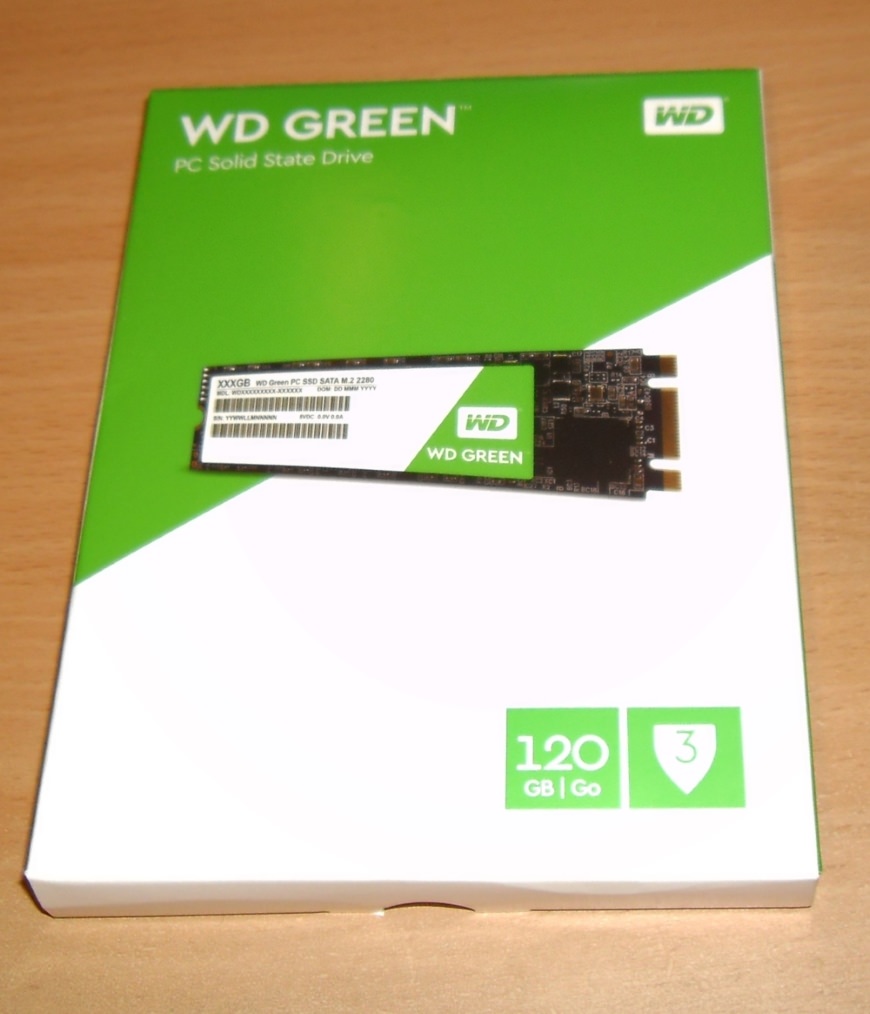 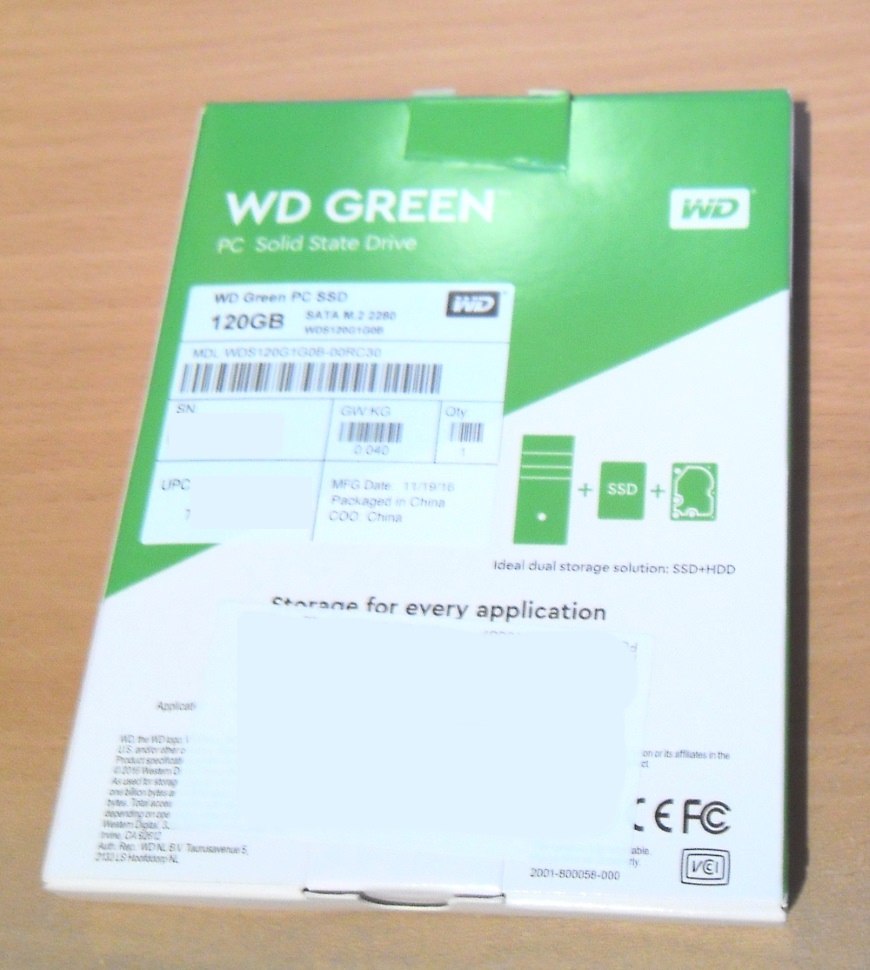 Well, there's not much to talk about here is there? Packaging is as bland as can be with nothing more than a sticker on the back with a few basic specifics and a subtle hint that you should perhaps go out and also buy a mechanical HDD from our WD overlords.

I'm not one for a lot of marketing on the product box, in fact I loathe it, but come on WD a simple small specs chart on the box or even included inside the box on a separate piece of paper would not of gone amiss. I shall look the specs up later.

While we are talking about packaging it has to be said the packaging that is meant to protect the drive I find to be wholly inadequate. On a store shelf, fine it's passable. What about the people who order from online though? These things are going to be shoved in to the packet post most of the time, these drives could be smashed or outright snapped in half oh so easily with the current packaging.

Let's not dally and move on to the last few pictures then. 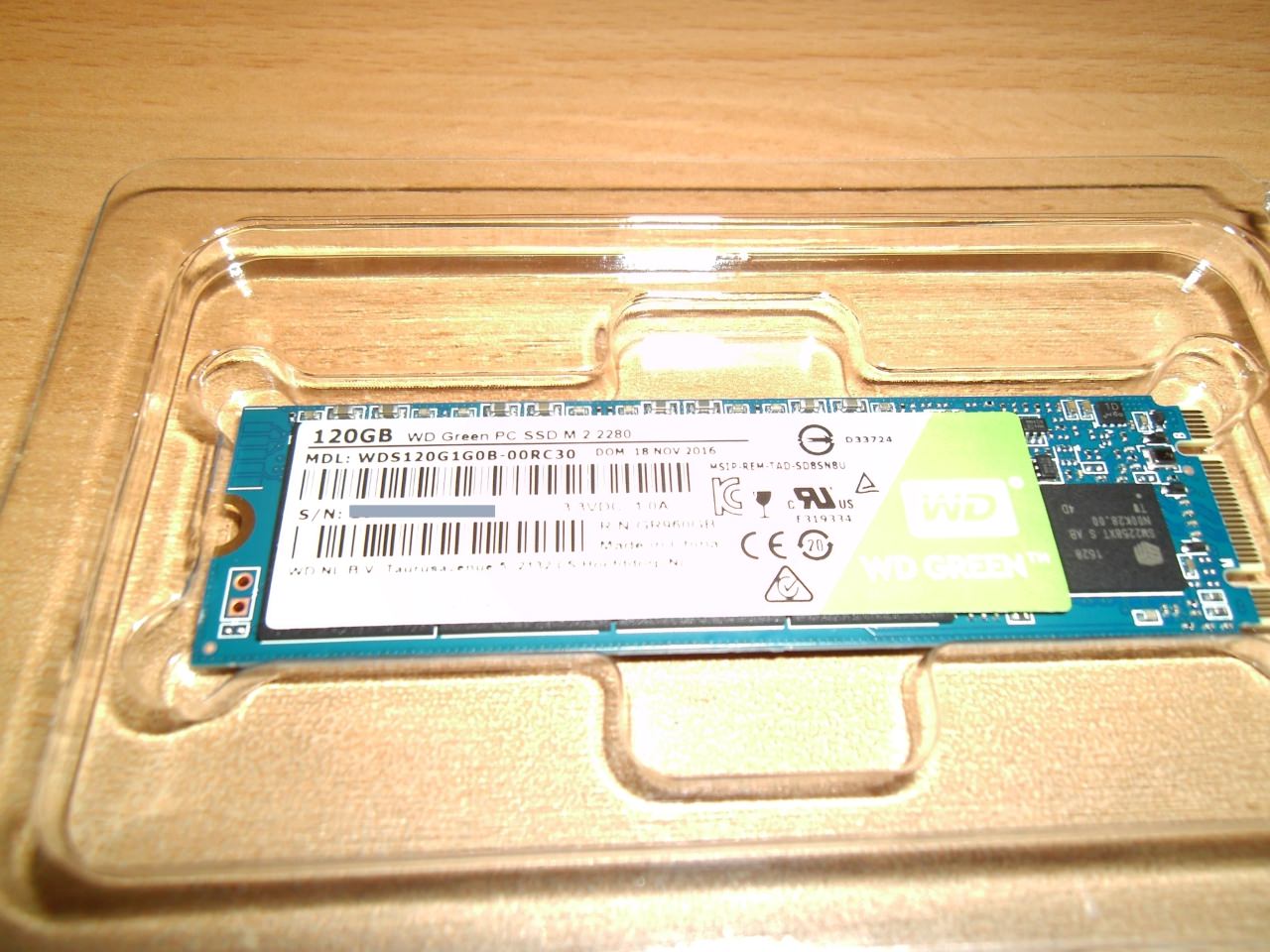 Not much to see here, a sticker on the front of the drive with very few details. At least the drive looks like it arrived in one piece and has a pretty blue PCB. 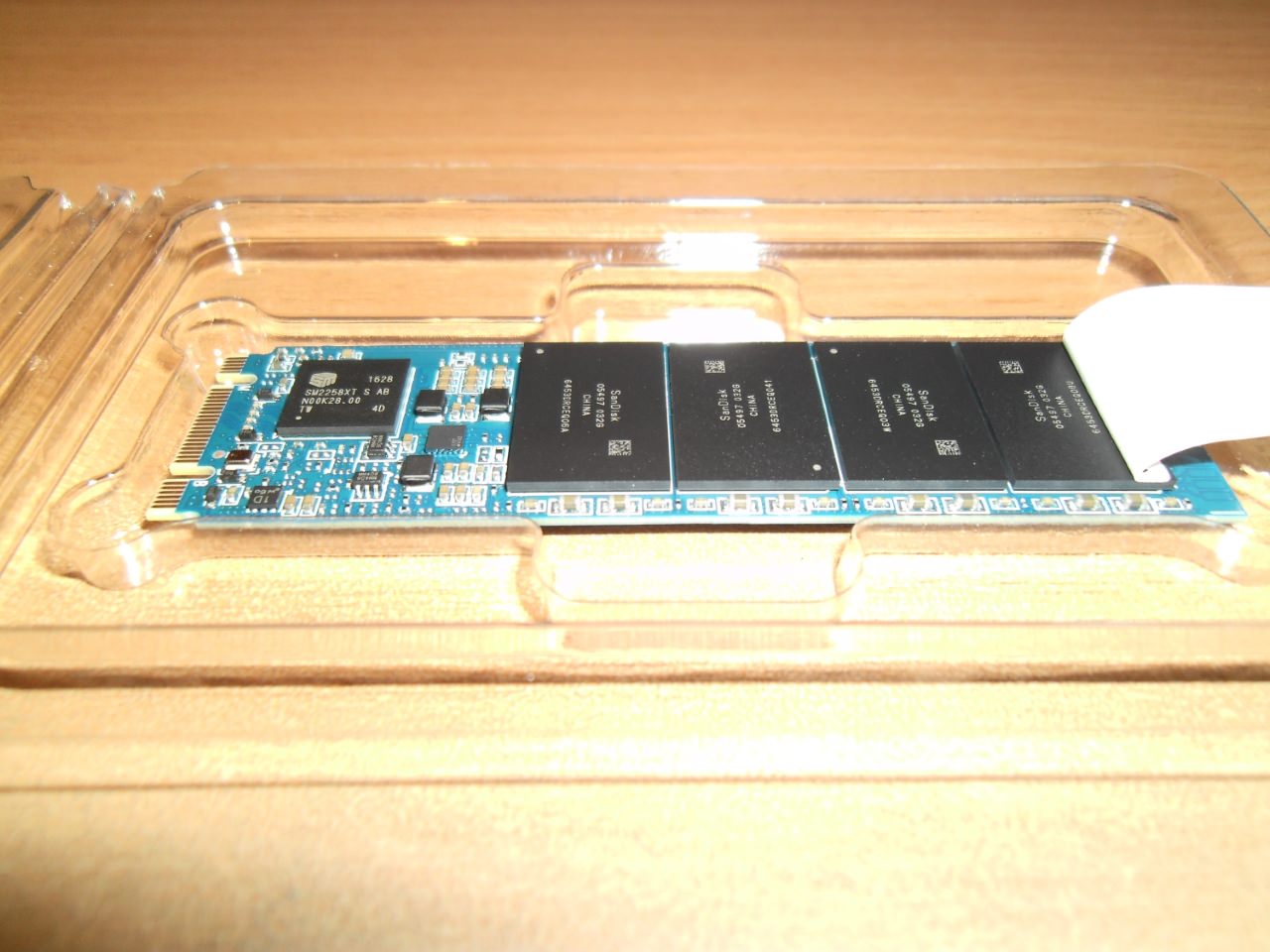 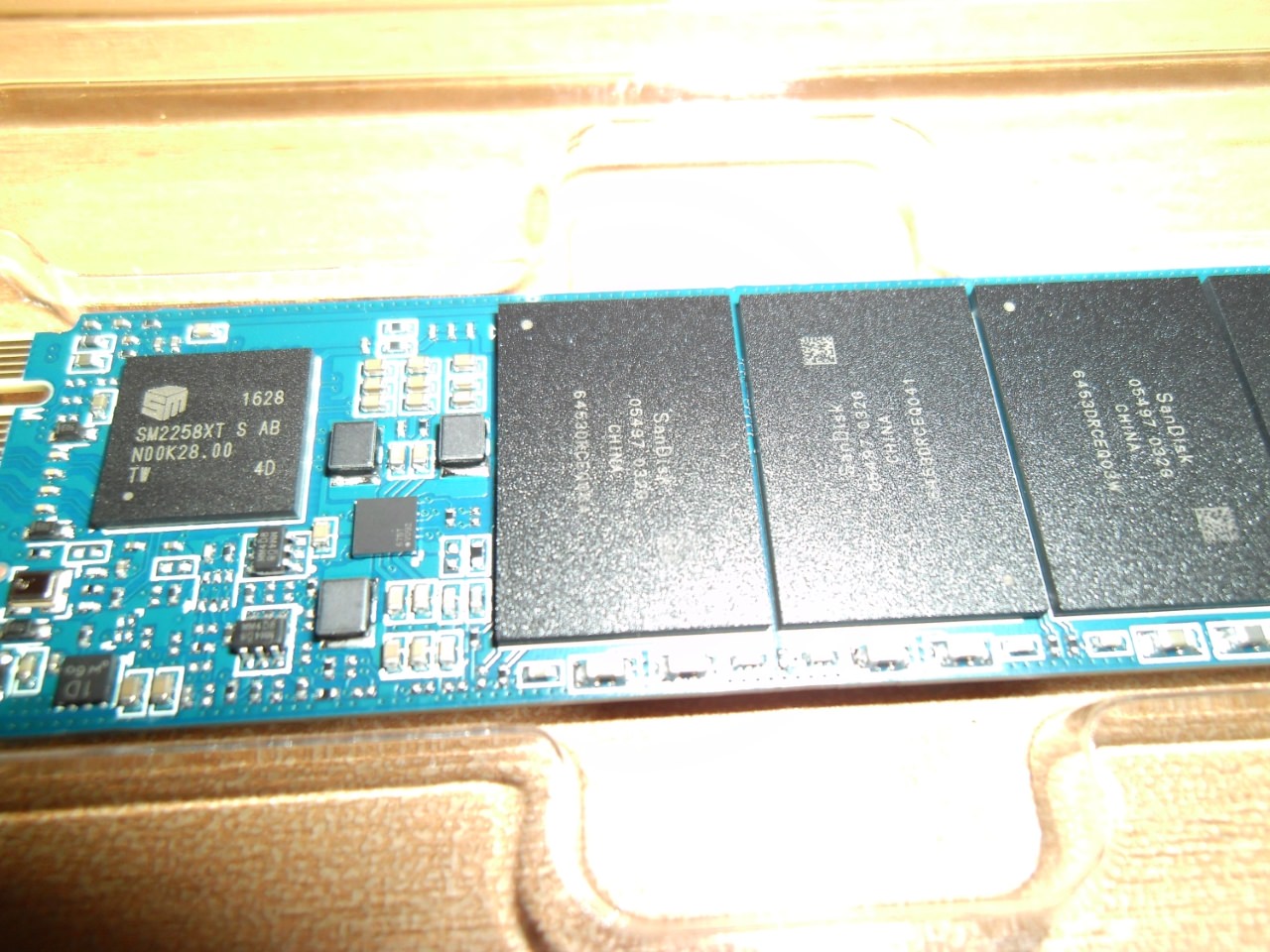 Peeling that sticker back to see what we have here if there was any doubt about the acquisition of SanDisk by WD this should put a end to that, WD boxed and branded SSD, "SanDisk" slapped for all to see on the NAND. We can also see the controller being used on this here drive, a SM2258XT, that's a Silicon Motion chip, folks.

Let's talk about that there SM2258XT for a bit. Shall we start by looking at its spec sheet? 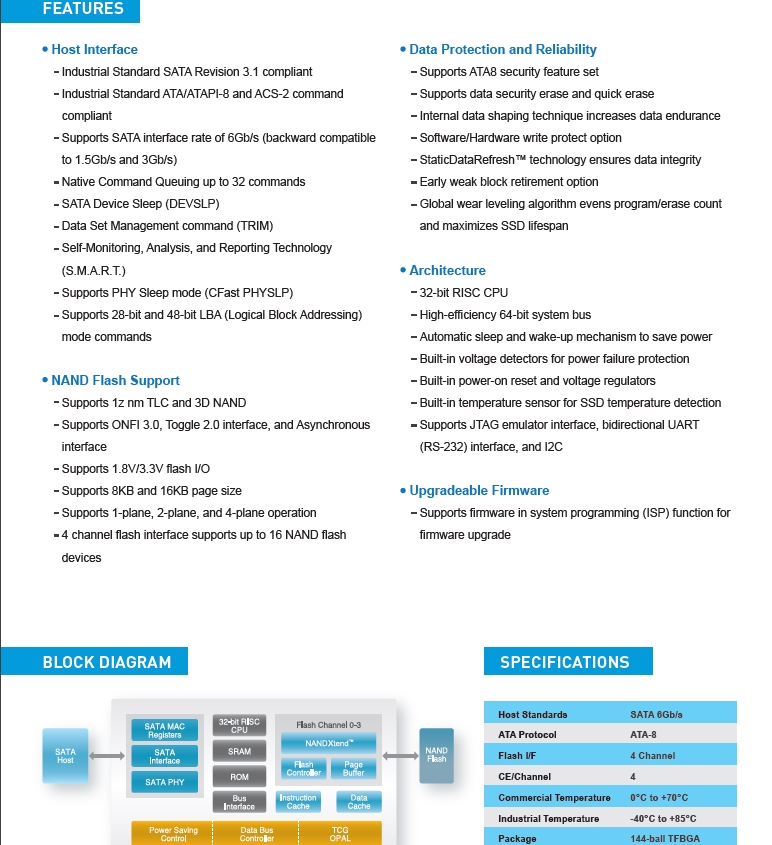 Well that's not too bad is it? A 4 channel controller with reads up to 540MB/s and writes up to 450MB/s, it also has a 40k random read IOPS and a 70k random write IOPS. As far as entry level M2 SSDs go, this SM2258XT controller is looking fairly promising. I couldn't find out just how old this controller is though.

I'm sure some of us at least will remember older M2 drives getting really rather hot yet not being provided with a heatsink. We don't want any repeats like that please WD, the last thing someone wants is their M2 drive dying where the un-sinked controller has got too hot for its liking and fried itself, nor do we want any unnecessary hot spots in the case.

Now, regarding my methods for testing a SSD, every drive I test will have something on it. You don't buy a SSD then marvel at how fast a completely empty drive is do you? Neither do I. As such every SSD I test will have either a clean install of Windows on or a selection of games, benchmark data will then be taken. This should to a very accurate degree emulate typical usage scenarios giving you a much better idea of what to expect. I'll also be using a SK Hynix SL301 for comparison today to show what a little more money spent can get you to help put everything in to perspective.

This WD M2 drive will be tested with a clean install of Windows on as somehow I suspect anyone looking at a M2 SATA based drive like this will be looking to have it as their OS boot drive. So, without further delay let's dive in and see what this drive can do.

CrystalDiskMark up first then, these numbers don?t exactly excite me but let's not forget this drive is as entry level as it comes. Baring that in mind the 120GB WD Green puts in a well balanced showing for itself demonstrating it is a competent performer that for the normal user will do whatever it is asked to lickety-split. 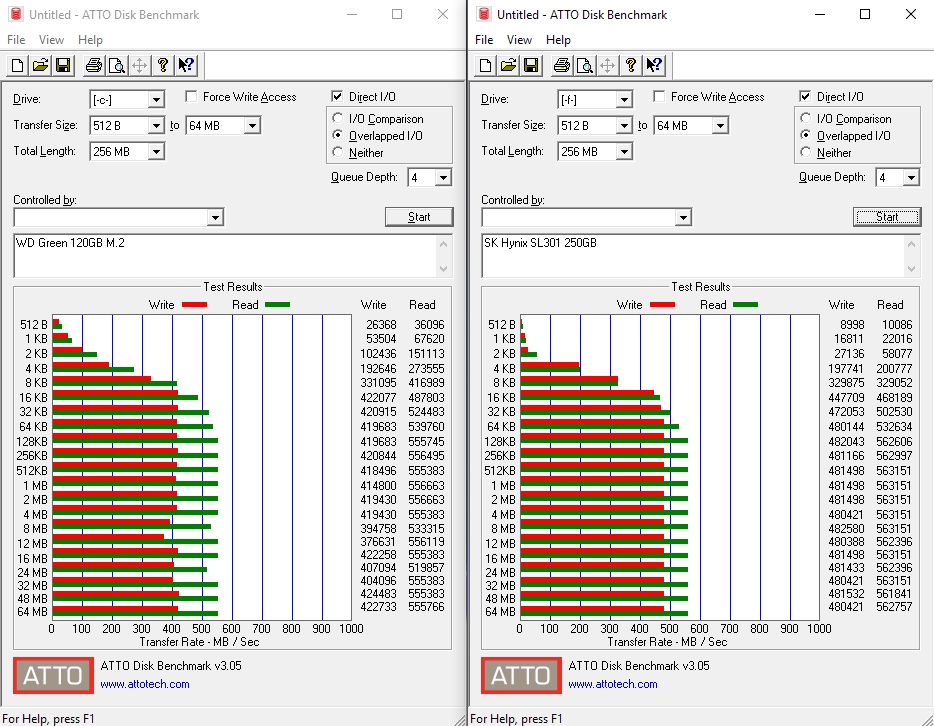 HD Tune Pro shows some interesting results, the area of the WD Green that is occupied with data shows a dramatic drop off in performance with one notable spike while the remainder of the drive that is empty while consistent plots a graph that is far from being steady, consistently unsteady I suppose you could call it. The performance is still plenty for anyone looking for a normal use SSD but it certainly doesn't look pretty. This is what entry level buys you people.

Let's have one final look at the WD Green in AS SSD. 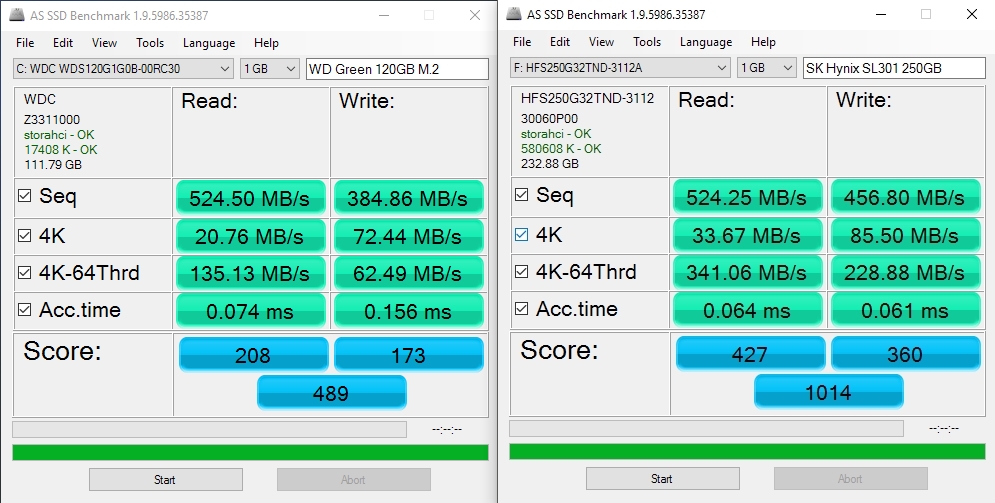 Our final look doesn't tell a story that different from most of the other tests, the drive plods along at a casual unremarkable rate which while not bad it does nothing to really get your attention.

Where to start with this drive? Well, let's consider the overall performance. The 120GB WD Green is a good all-rounder for normal use as a OS drive, it will happily deal with any day to day and OS related tasks with aplomb making it a good choice for those looking to kill the lag of a mechanical HDD but a performance SSD this WD Green obviously is not. The drive comes with a 3 year warranty and dashboard software to monitor such things as health, temperature, SMART stats and more but you wouldn't know the latter of those in particular unless you happen to visit WDs site. In terms of looks the drive is nice enough being on a blue PCB but the lack of a heatsink is one cheap step too far and I just can't get over how little protection the drive has with the current packaging.

The WD Green retails for around 54 pounds, which while certainly not going to break the piggybank roughly 16 pounds more will buy you a 250GB model from most manufacturers. Overall the WD Green is a solid start from WD (lame pun intended!) and I hope to see a increased capacity M2 SATA based SSD from WD for the same price as this 120GB model in the near future.

So with all that said, it comes down to the final score, I must score against the lack of even a cheap heatsink and the price being really on the high side in respect to the storage capacity the drive offers. Everything else checks out quite well though the performance is decent, if unremarkable, and the warranty and software is decent enough but the WD Green is no PNY CS1311 which while not a M.2 SSD variant will handily outperform this drive for the same money.