@isameking12 :
Thanks for the HardwareIDs.
If you are not satisfied with the Win10 in-box MS NVMe driver, I recommend to install the Samsung NVMe driver v3.0.0.1802 WHQL for Win10. It will support the NVMe Controller of your NVMe SSD.
You can find the download link >here<.

Many thanks Fernando, I have managed to install the latest driver through the steps you gave me. I really appreciate the help and keep up the good work!

What does that mean? Which driver did you try to replace? What exactly have you done and what exactly happened?

this is the driver: 64bit OFA NVMe Driver v1.5.0.0 for Win10 x64 mod+signed by me
I have installed with device manager and a manual research.
After i am unable to load windows, block at circle points

@pipes80 :
Thanks for having answered my questions.
I agree with you - the OFA NVMe diver itself (the *.SYS file) has not been well compiled by the OFA team. The problems you got would have been solved by using the Advanced Boot options and by hitting F7 while booting.

but that way is not used to disable the driver signature?
I’ve already disabled it with the command line

but that way is not used to disable the driver signature?

No, this is not required, if you import the Win-RAID CA Certificate before going to install any of my mod+signed drivers.

I have try to install the certificated but i take same problem.
I have install without advanced boot, u think to try with advanced boot?

Nothing to do, always block at same point.
I am really happy to try a driver then make a boost at my disk.
Thank u for all @Fernando

I have try to install the certificated but i take same problem.

Does that mean, that the Certificate couldn’t be successfully imported?

What do you mean with “advanced boot”?

yes, the certificated is installed with succesufully
signature driver disabled

@pipes80 :
Thanks for your reply.
Were you not able to boot or not able to shutdown the PC?
By the way- I had the same problems with the OFA drivers.

I am not able to load windows, when charge circle points I take a block

Do you have any idea why the Microsoft controller is faster than both Intel and Samsung’s very own for their EVO 970?

Also, sorry for the noob question, but how does one ‘switch’ the controller if I already have installed the Samsung NVMe Controller? Thank you in advance.

Do you have any idea why the Microsoft controller is faster than both Intel and Samsung’s very own for their EVO 970?

Usually the latest specific driver, which has been delivered by the manufacturer of the related Controller, is better regarding the stability and performance of the system, but there are exceptions. According to my own experiences the performance differences between the generic MS NVMe driver and the Samsung NVMe driver v3.0.0.1802 depend on the environment (e.g. the system’s chipset).
Here you can see, that the 250 GB Samsung 970 EVO runs faster with the Samsung NVMe driver (right picture) than with the MS one (left picture), when the mainboard has an Intel 9-Series chipset: 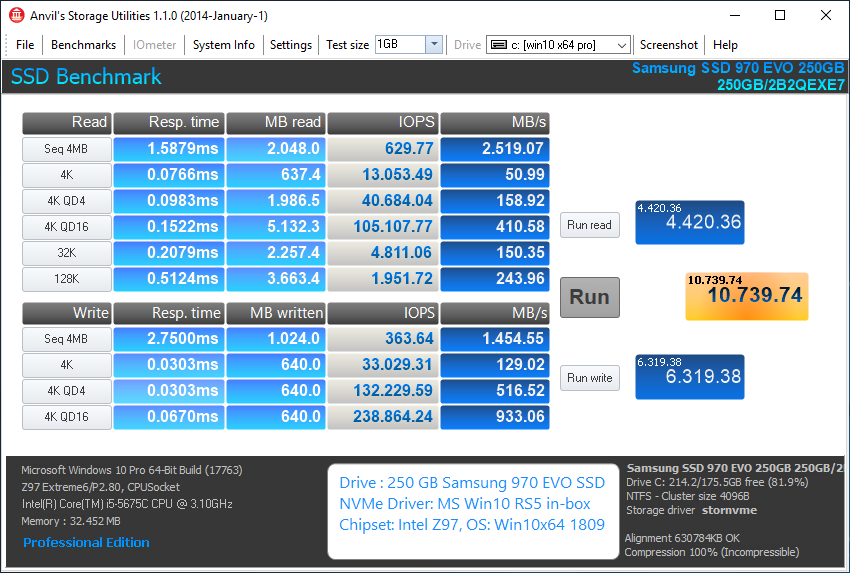 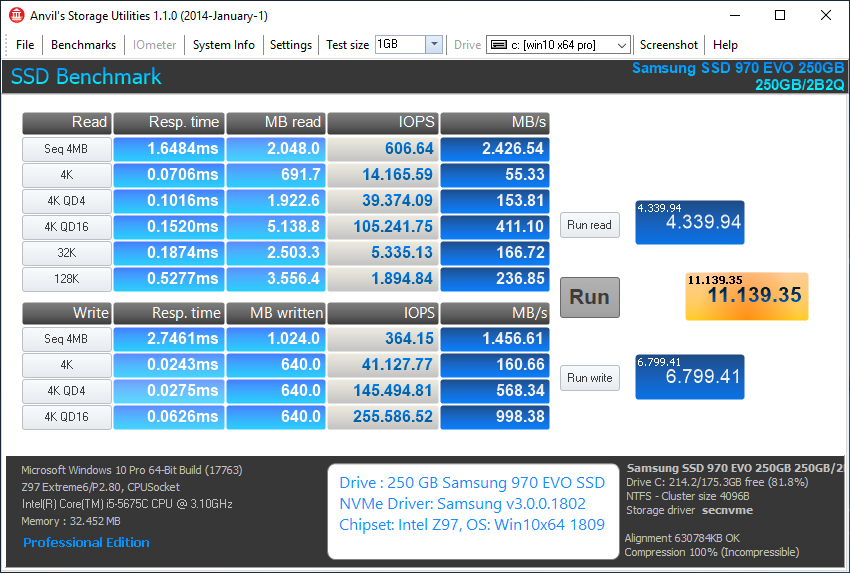 how does one ‘switch’ the controller if I already have installed the Samsung NVMe Controller?

The Controller will only be renamed by a driver switch, but never replaced by another one.
This is the way how to replace the in-use NVMe driver by a desired other one:
1. Run the Device Manager and expand the “Storage Controllers” section.
2. Right-click onto the listed NVMe Controller (however it is named) and choose the options “Update driver” > "Browse my computer…"
3. Hit the “Browse” button, navigate to the folder, which contains the desired driver files, and hit “OK”.
After having gotten the message, that the desired driver has been successfully installed, you have to reboot. After the next reboot the freshly installed driver will be the in-use one.

The search of NVMe driver brought me happily to here

I’ve bought my very first NVMe SSD (should arrive tomorrow) and I know that Windows 7 doesn’t have native support for NVMe devices. So I installed the KB2990941 (not available anymore by MS; found another source).
I’m a little bit confused what this KB is. Some say, you only need it if you want to install Windows 7 on a booting NVMe SSD, some say it’s a driver in general to make use of NVMe support in Windows 7.
Is this KB2990941 a native driver for Windows 7 (not even to integrate into a custom boot medium for installing Windows 7 on a NVMe device) or do I need this KB2990941 in all cases to get a NVMe device to run in Windiws 7 (e.g. as a second disk)?
The last of my questions would be: do I have to uninstall this KB2990941 if I want to install another third party driver (OFA)?

Thank you very much

I tested three drivers. The default windows one that it installed with the OS. The Samsung one listed on the “Recommended AHCI/RAID and NVMe Drivers” thread in the generic board. And the OFA drivers from the first post in this thread (the ones signed by Fernando).

The OFA gave me the best preformance, but it wasn’t that much better then the Samsung ones. Maybe 100 MB/s or so better. So I left them on.

Then I was reading about the reboot/shutdown/startup issues with that driver so I tested. Sure enough, I couldn’t shutdown. Windows would popup the Shutdown screen, but then bump me back to the desktop (with all applications closed). I then forced the shutdown by clicking shutdown and then while it was in between the shutdown screen and windows reappearing, I hit my power button. That seemed to do the trick.

When restarting the system, I was kicked into the Automatic Repair (which failed) and then I was stuck. Nothing I tried seemed to work. I even tried the advance boot options, and then F7 to disable the driver signature check. That didn’t work. It started to boot, but on the loading screen I blue screened with an error that said “NO STORAGE CONTROLLER” or something to that effect. Since I’m an idiot and didn’t have a restore point, I ended up having to boot safe mode. From there, the old driver was back. I then rebooted normally and Windows was back to how it was with the default driver.

I’ve now reinstalled the Samsung one that doesn’t have the shutdown/start-up problems.

@Fernando hello i put this driver >64bit OFA NVMe Driver v1.5.0.0 for Win10 x64 mod+signed by me< and my problem is installed works but restart dont boot the system!!no problem because i have restore point!!!how to works this driver mod?thanks

@panosxidis :
Due to the reboot resp. shutdown problems I do not recommend to install any of the currently available OFA drivers. My modification of the INF file doesn’t solve the issues of the driver itself (= *sys file).
Which other NVMe drivers did you test?