Important Drivers Specific: NVMe Drivers
Fernando September 19, 2018, 4:39pm #1
Introduction:
NVMe is the currently latest and best performing data transfer protocol. That is why users, who want to run their system with the highest possible speed, should buy an NVMe SSD (or more than 1 of them combined as RAID0 array) and install the OS onto it.

On the other hand all NVMe SSD users should keep in mind, that the effective/real performance of such system depends on
a) the size and the model of the NVMe SSD(s),
b) the installed OS,
c) the age/quality of the used mainboard and its PCIe/M.2 connections,
d) the size and quality of the in-use Memory (RAM) modules,
e) the individual BIOS and OS settings (look >here<) and
f) the specific NVMe driver, which is managing the NVMe Controller of the SSD.

Conclusion: Since each system is different, there is no NVMe driver available, which is the best for everyone.


Own Benchmark Comparison Tests:
(completely updated on 01/31/2022)
Recently I had access to 2 PCs with completely different chipsets (Intel Z170 resp. AMD X570) and additionally to 2 x 1 TB Samsung 980 Pro SSDs.
This gave me the opportunity to do some NVMe driver benchmark comparison tests with both Intel/AMD systems running the same OS version on the same NVMe SSD model by using different NVMe drivers.
Notes:

These were the drivers I have tested until now:
Here are the benchmark results I got: 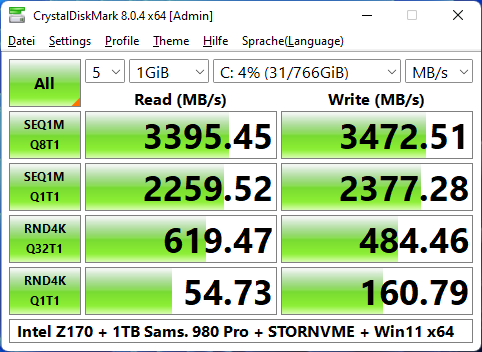 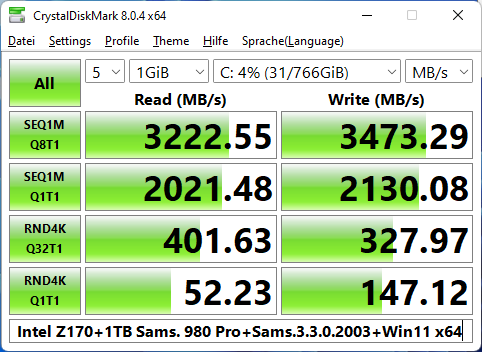 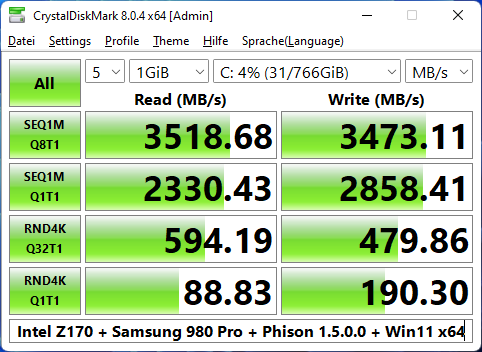 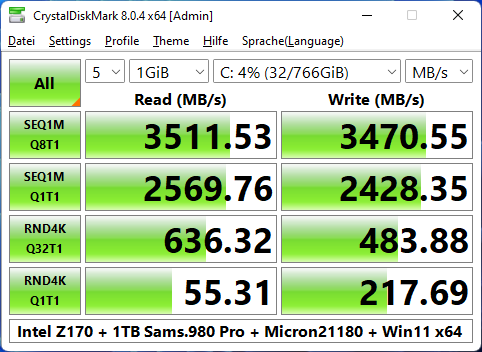 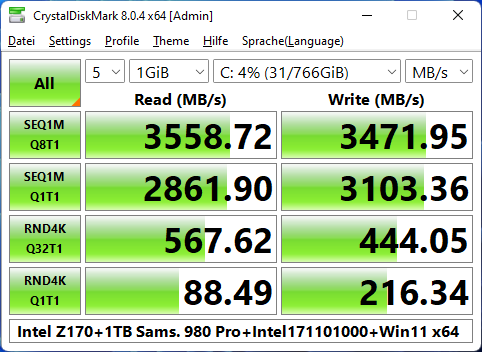 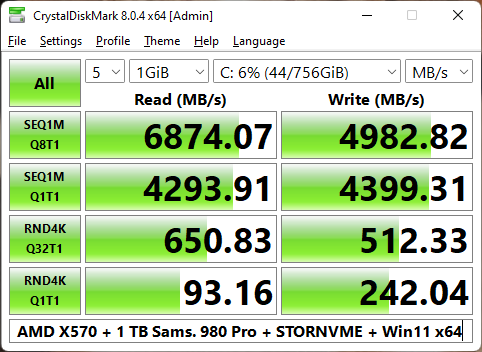 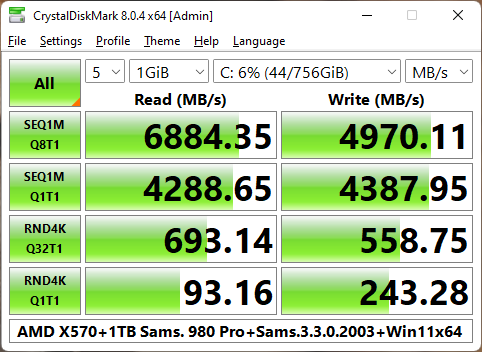 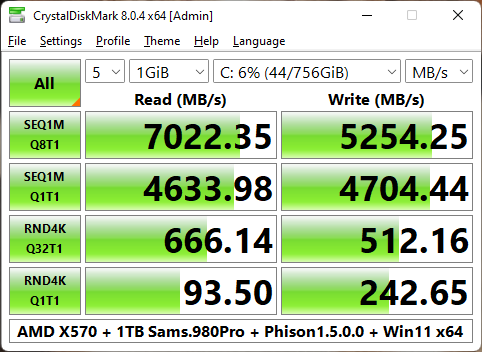 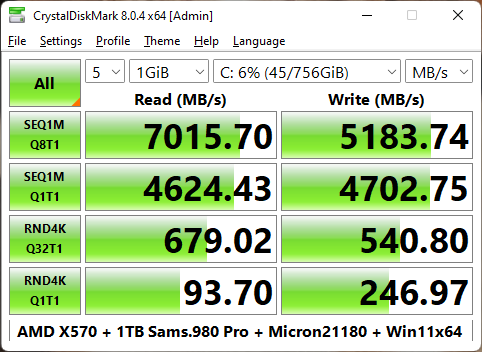 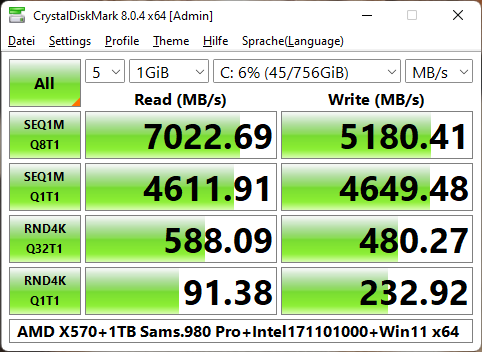 Evaluation of my test results:

If you want to get any other NVMe driver tested, please let me know it within the next days (as long as the test systems are usable).

So, best performace is with OFA drivers, but they don’t support TRIM command (just in raid?).
I can’t find the link for your modded OFA drivers, anyway…

@gpvecchi :
Please have a look into the just updated start post.
Here is my comment to your statement:
1. The 32/64bit OFA NVMe drivers v1.5.0.0, which have been mod+signed by me, definitively do support TRIM, but I don’t know, whether the TRIM command passes through the NVMe Controller of a RAID array.
2. You cannot find yet the download links to the winner of my benchmark comparison test, because I don’t want to recommend a driver, which prevents the normal shut-down of the computer.

Thanks for your testing and comparison here Fernando! Driver causing unable to shut down via start menu power button? That is new one! Did you reproduce that issue on another motherboard/BIOS/OS install, to rule out some quirk in that specific setup?

@Lost_N_BIOS :
Yes, that is an interesting behaviour of the OFA driver while running Win10 v1809.
Today I followed your advice and tested the same NVMe drivers with my Xiaomi Notebook, which uses a 256 GB Samsung PM961 as system drive. These tests were done before (running Win10 v1803) and after a clean install of Win10 v1809 (Build 17763.1). The installation of the mod+signed OFA driver v1.5.0.0 went flawlessly with both Win10 versions, but the behaviour thereafter was different:

By the way: I got interesting benchmark results with my notebook, which I will publish this evening.
Lost_N_BIOS September 20, 2018, 8:39pm #6

That is very unusual for a driver to be able to cause that, I wonder why/how it’s doing that? Especially since you said the “OFA team didn’t do much more than to change a little bit the code of the MS NVMe driver”, how is this causing issue, and how is this small change giving much better performance results too?
Maybe you will eventually figure out the issue? What if you don’t mod+sign the driver, does the shut down issue happen?

Any feedback is welcome!


@Lost_N_BIOS :
Yes, it s hard to believe what I found out regarding the impact of the mod+signed OFA NVMe drivers v1.5.0.0 on the Windows reboot and shut-down procedure.
Most interesting is the fact, that Win10 v1803 obviously responds to that driver completely else than the upcoming Win10 v1809.

Maybe you will eventually figure out the issue? What if you don’t mod+sign the driver, does the shut down issue happen?

You can be sure, that I will continue my tests trying to find out the exact reason for this extraordinary reaction of the Windows OS.

Sometimes my Samsung drivers have same behaviour: PC doesn’t turn off. This usually happens when rebooting, not when turning off. IDK if this can help, but after force the stop, I am prompted to enter bios, like a failed overclock.

What if you don’t mod+sign the driver, does the shut down issue happen?

This is what I just have tested:
I took the original OFA driver v1.5.0.0 for Win10 x64 dated 04/07/2017, just removed the associated (not valid) *.cat file without touching the other files and gave them a correct digital signature (to be able to get it properly installed).
Result: I was not able to shut-down my PC from within Windows.
Conclusion: It is neither my modification of the *.inf file nor the renaming of the original driver files, which causes the shut-down problem.
I suspect, that it is an issue of the Win10 Build 17763.1.

So a general incompatibility with the Win10 build and the OFA driver no matter how it’s used. I guess that means both MS and OFA will have to be notified to look into that one.

@Lost_N_BIOS :
I will do that after having more information about the exact reason for my reported issues while using the OFA NVMe driver.

@all Win10 x64 users with an NVMe SSD as system drive:
You are all invited to help by testing the OFA driver variants and give us your feedback thereafter.
The download links to the original 64bit OFA NVMe driver v1.5.0.0 for Win10 x64 and to the variant, which has been mod+signed by me, are now available within the start post.

Good luck and thanks in advance!

i have samsung pm981… better with OFA NVME driver???

i have samsung pm981… better with OFA NVME driver???

It depends on the environment of your computer/notebook (e.g. the chipset and the OS.
Why don’t you do a benchmark comparison test yourself and report here about your results?

I have a PM961 and want to give the Intel ones ago (am on a HM175 mobo) and trying to install through the INF / Device Manager method, I get a few options, after choosing istorAC.inf , it does two, Intel RST and Intel NVME driver, when I select the NVME driver it shows a popup stating Windows can’t verify it’s compatibility blabla and that it could cause malfunction, that’s expected to popup right?

when I select the NVME driver it shows a popup stating Windows can’t verify it’s compatibility blabla and that it could cause malfunction, that’s expected to popup right?

Yes, I got this popup as well. Just ignore it and continue the installation. It will work.
To prevent any problem, I recommend to set a restore point before starting the driver installation.

Hi there fernando hope you are doing well mate! I have an oem samsung mzvlw128hegr-00l2 nvme ssd. My system is a lenovo y520 laptop and O currently have microsoft drivers from 2006 installed for the drive. I have searched for hour trying to find the right driver and have tried a few but i get the prompt that the best drivers are already installed when trying to do it through device manager. FYI im running win 10 64bit OS. Much appreciated and look forward to hearing from you

Many thanks for the quick reply i appreciate the time you take to help. Thanks for clearing that up for me, now that I know how to install correctly would you be able to direct me to the correct driver?

would you be able to direct me to the correct driver?

Yes, if you post the HardwareIDs of your SSD’s NVMe Controller (right-click onto it > “Properties” > “Details” > “Property” > “HardwareIDs”). 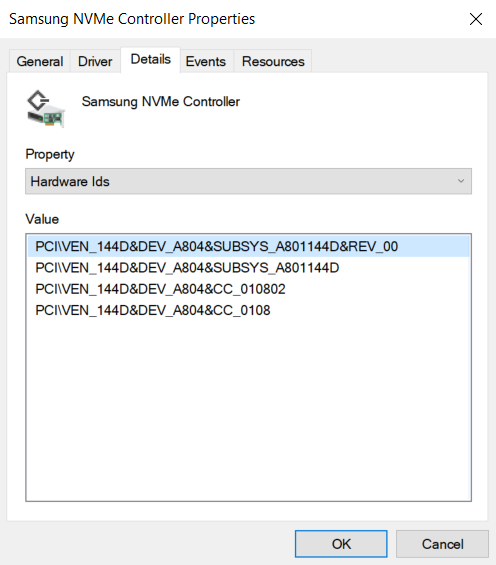