Hello everyone, thanks for giving me the opportunity to bring this subject into conversation.

In short, as you all should know, NMVe is a standard defined by a couple of companies. In their website, Open Fabrics, they mention some drivers like the inbox Win 10 and an open source one. They are listed here:
http://www.nvmexpress.org/windows-driver-microsoft-inbox/

What bothers me is that they’re saying that the Inbox driver only supports NMVe 1.0e spec, and the open source one 1.2e. Since the SSD I have is an Intel 600p 256GB, just released, I believe it came already with this new spec, released in Dec 2014.

So, have any of you tried? Unfortunately I couldn’t install here, it game me an error, but I didn’t spend too much time on it though…

Sorry, just found this post from an Intel employee asking for people to test it… I couldn’t find where to get the most recent…

@hmaqueda :
Welcome at Win-RAID Forum and thank you very much for your interesting contributions and links.

Unfortunately I could not yet find a download link to the most recent NVMe driver, which has been developed by the related group.
Can you give me a direct link?

Thanks in advance!
Dieter (alias Fernando)

Sure, I found it here
https://svn.openfabrics.org/svnrepo/nvmewin/releases/revision_1.4/installations/64-bit/

Thanks for the link.
After having downloaded the related NVMe driver files I realized, that the related 64bit NVMe driver v1.4.0 is dated 12/08/2014 and not digitally signed.
These are the informations about the digital signature of the driver: 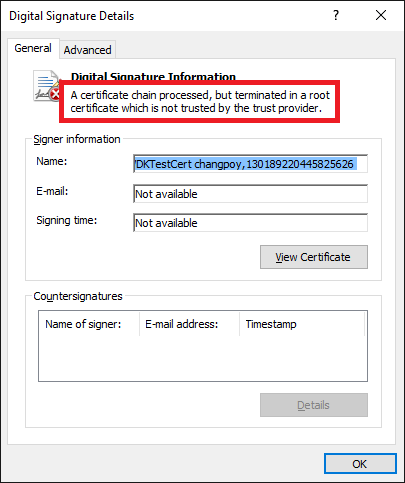 My comment:
Due to the fact, that the available NVMe drivers are nearly 2 years old and not correctly digitally signed, I will not try to get them installed.
Thanks nevertheless for your infos and the links!

Just to follow-up on this one, I’m still talking to them on their list. It turned out that, in order to get the recent driver, you have to compile it yourself from the source. Since I’m not good at it, they will release a binary 1.5 version soon… Also, I’ve confirmed that the Intel 600p is NVMe 1.2 compliant using AIDA64. Which means that, if the device/driver NVMe version matches, you’ll get much better performance than the inbox driver.

Hey guys, just updating this thread here… They’ve just released the driver binary, it supports Win10 now and so on. I’m going to paste Ray’s email down here for reference:

Thanks a lot for feedbacks and tests. Anyone interested join their discussion.

I am pleased to announce the 1.5 release of the open source OFA NVMe Windows driver. This release is the result of excellent collaboration and contribution within the NVMe and OFA communities.

With the above feature and bug fix additions, the OFA reference driver now contains:

Please refer to the readme.txt file for details.

The 1.5 release package may be downloaded from - https://svn.openfabrics.org/svnrepo/nvme…es/revision_1.5

Thanks to HGST, Samsung, PMC-Sierra , Google, Intel, Ulink and all others who contributed to the successful 1.5 release.

@hmaqueda
I just tried to get the WDKTestCert NVMe driver v1.5 installed onto my Z170 system running the Samsung 950 Pro SSD as system drive.
Result:
The installation failed. This is what I got: 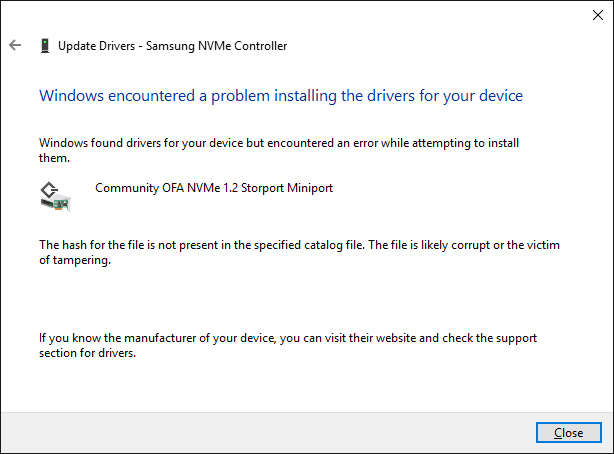 I just wanted to tell you all I installed the OF ver 1.5 driver on my system and I didn’t notice any difference in speeds. Could be because I’m not running at full pci-e 3.0 link speeds and being bottlenecked by my motherboard.

If anyone else wants to try go to:
https://svn.openfabrics.org/svnrepo/nvmewin/releases/revision_1.5/installations/ and turn off driver signing. To do that you can try:

And either press shift while clicking restart, and select ‘Disable driver enforcement’ at the troubleshooting page.
After that you right click the nvme setup file and click install. From there go into device manager and right click the microsoft nvme driver and select update and browse for it manually where you should see
the open source one. Note you might have to install a svn checkout utility to download those driver files. I used turtoiseSVN and right clicked the svn server path of the driver into that utility to download.

Was able to fix the bottleneck issue after placing the card in the 2nd PCIE-X16 Slot as opposed to the X8 slot.

Did a couple of benchmarks with CrystalDiskMark:

With the Standard Microsoft Driver:

With the Open Fabrics Ver 1.5 Driver:

Anyone else interested in posting your benchmark results? Got to be some other curious minds out there?

As soon as I have the required time, I will install the brandnew v1703 of Win10 x64 onto different NVMe SSDs and do some benchmark tests using different NVMe drivers.
If I should be satisfied with the stability and performance of the OpenFabrics NVMe drivers v1.5.0.0, I will give them the Win-RAID CA digital signature. 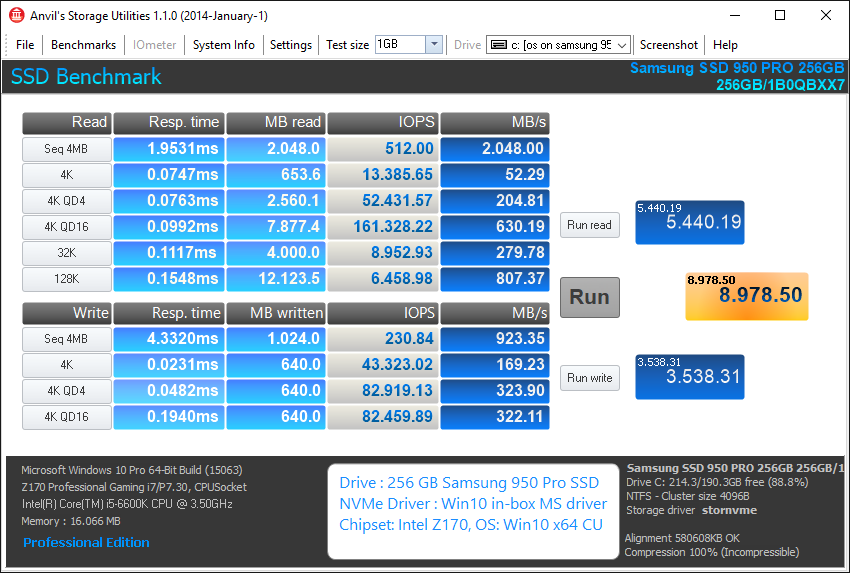 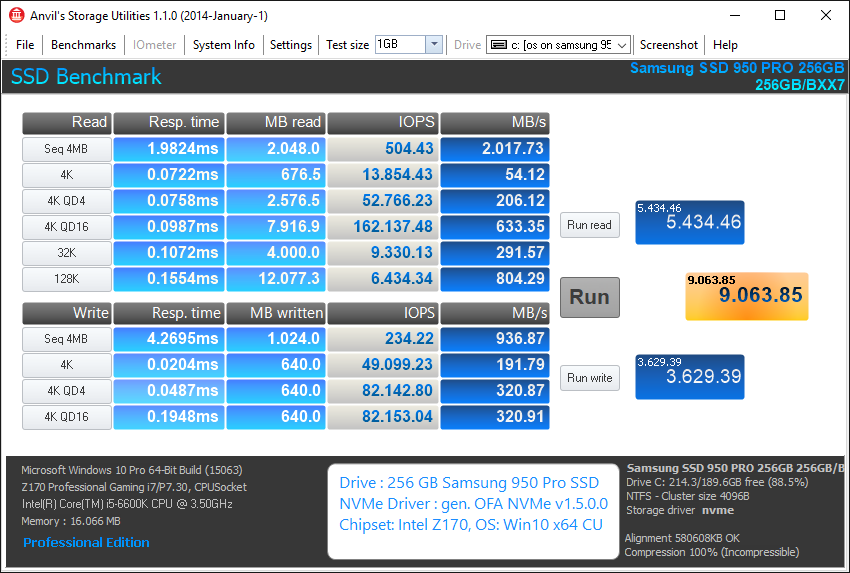 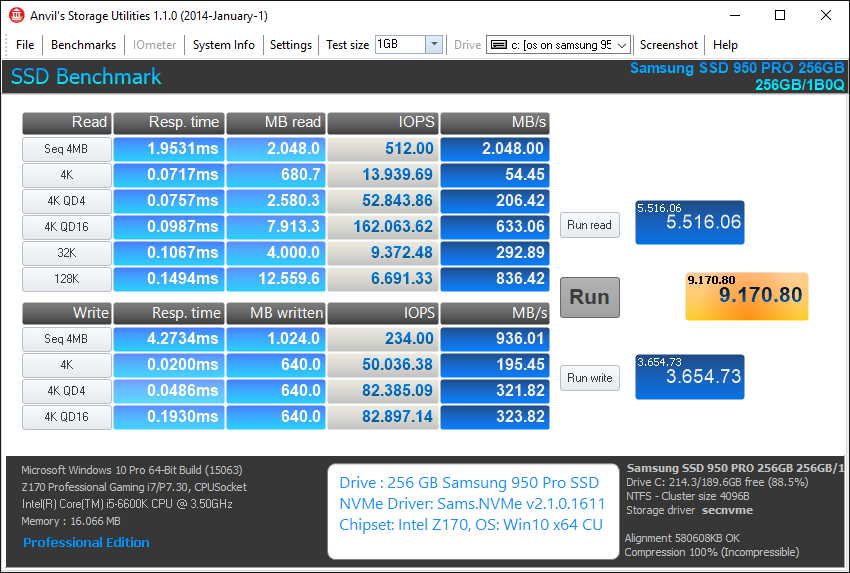 My conclusion:
As long as we don’t have properly working Samsung resp. digitally signed OpenFabrics NVMe drivers, I recommend to use the MS own generic Win10 in-box NMe driver.
MT1 March 26, 2017, 10:59pm #14

So I was first pretty shocked about the performance, but it ended up being a faulty bios setting and clean Win7 install which initially had bad performance.
I still wasn’t extremely pleased with the performance but i was ofcourse looking at ‘theoretical’ speeds.

Anyway, I’ve tried this driver and apparently it seems to work a bit faster for me. It’s actually quite a bigger jump than expected!

Anyone know how to startup without having to press F8 all the time? I’m getting A CI.dll error or something otherwise. Im too lazy to find out myself xD

@MT1 :
Welcome at Win-RAID Forum and thanks for your contribution!

Anyone know how to startup without having to press F8 all the time?

The OpenFabrics driver has yet not been correctly digitally signed.

Ah gotcha. Thought it was.

Unfortunately now I keep getting the CI.DLL 0xc000428 "0xc0000428 Windows cannot verify the digital signature of …"
error unless i use F8 to disable driver enforcement.

Already deleted the two values with Bcdedit.exe and replaced the driver back to MS Native. Also Windows seemed to have lost its ‘activation’ status.

Thank you for running your benchmarks comparing the OpenFabrics Driver vs Microsoft and even vs Samsung driver. It was very interesting and deserves more study. You have always done an amazing job and I do appreciate the effort you have put into these benchmarks and the work you have done in the past.

PS: About running the OF driver and disabling driver enforcement I guess that is a personal choice the user would have to make. On my overclocked test machine I really don’t mind as I am pushing its limits in anycase. Thank you.

About running the OF driver and disabling driver enforcement I guess that is a personal choice the user would have to make.

You mean it could be dangerous and unsafe? If so I guess you have a point. Thank you.

You mean it could be dangerous and unsafe?

Yes. As you can read >here<, I have not even been able to reboot into my OS after the successful installation of the OpenFabrics driver.