I am having an issue with my 580. I bought this gpu from ebay few months ago and when I installed it, it didn’t boot. I thought it was my older system that didn’t support it.
Now I got a new system, ryzen 3700x with gigabyte x570 motherboard, the gpu wouldn’t work, so I searched techpowerup for a compatible bios which I did find one. I backup the bios that was in the gpu and then I flashed it with the new, and the gpu works now.
So I used the GOP updater from this forum and everything was working well. Now my issue is when I am trying to do a full/native uefi boot, my motherboard bios won’t allowed it. In my bios, the option is CSM Enabled, when I disabled it, it keeps coming back to enabled.
The issue is mostly with the displayport connection. Using a certified cable. The only way I was able to uefi boot was setting up the secure boot when I was able to boot in uefi mode (which would rarely happens).
I contacted gigabyte email tech support and they mentioned that the Uefi structure in my video card is bad. Now I am trying to figure out if my vbios gop structure or checksum is bad. If someone can point me to the right direction, I would be very grateful.
I think this card was from a miner which he most likely modded the bios. I will attach the original bios from the card and the one I found from techpowerup with the latest gop update from the updater.

Can you disable CSM with another card? I’m wondering if some other setting is enabled/disabled set incorrectly etc, stopping Secure Boot /UEFI mode from being possible, thus enabling CSM when you disable it.
Or some enabled/in-use module does not have a UEFI/EFI module in the BIOS, thus stopping Secure Boot from being possible. This needs to be confirmed with some other card before you think the card or current vBIOS is to blame, as it may be a BIOS issue or some other setting causing this.

So, what, gigabyte “Checked” your mod BIOS for you? I doubt they did this, you probably got a canned reply from them, they wouldn’t look into something like that, and if they did take the time to do that then they’d probably just send you a fixed or proper original UEFI BIOS.

Why did you have to search for a “Compatible BIOS”, instead of searching for the original BIOS for this card?
Actually, after comparing, I guess this is what you did, looks like all exact same BIOS to me except for your updates (There is no special “mining” changes, all speed, timings, voltages, fan profile, everything = exact same/same in both files) 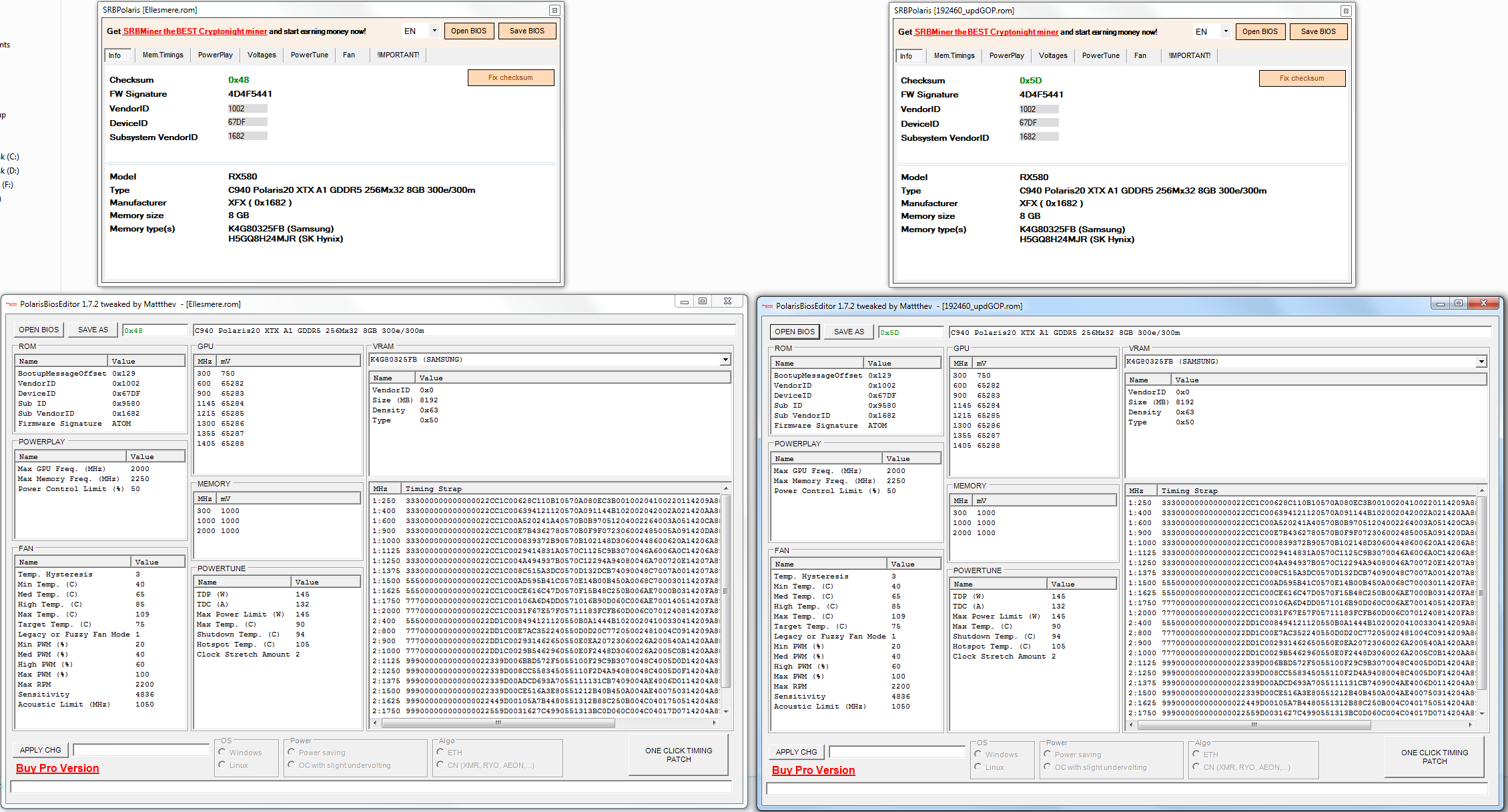 The only thing I see different between the two BIOS, aside from your update, is in the legacy orom image, circled here 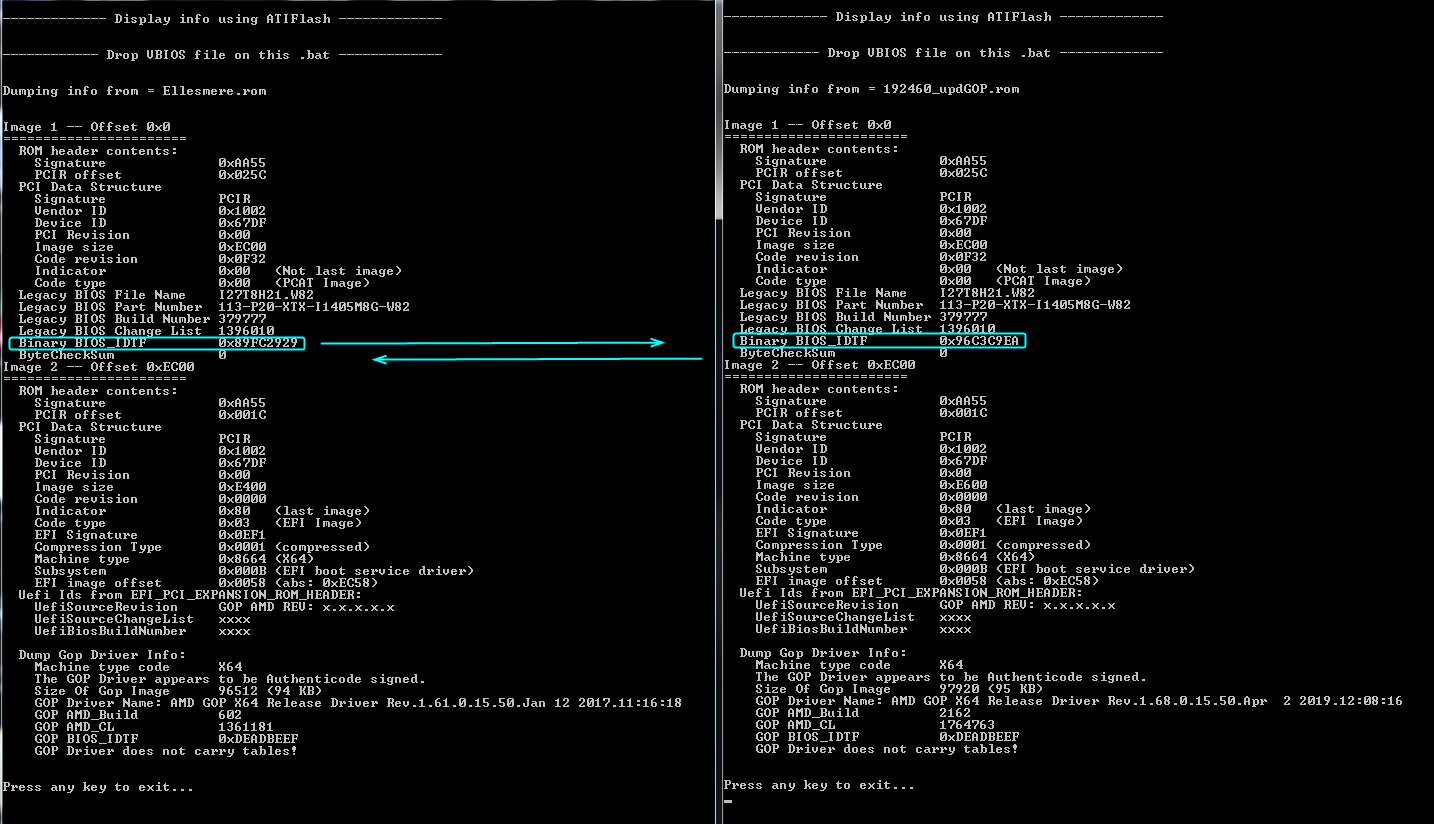 Did you ever test the original vBIOS, with updated GOP? That may work fine, the original BIOS opens in all tools and looks correct/fine to me, no checksum issues etc.
Due to this, and what I mentioned directly above about this being same BIOS, I think my initial paragraph is what’s going on with your BIOS settings.

Yes I have tested with a Sapphire rx 480 and a 280 video cards and this still happens in all the cards I currently have available.

The issue is having native uefi without secure boot. I am able to run native boot with secure boot, if during a bios/uefi reboot and csm is able to stay disabled, then I can enable secure boot.

Yeah gigabyte did not ask for any bios and they just kept saying that the gpu’s uefi structure is the issue and they probably didn’t ask since the video card is from xfx. I kept mentioning that I have tested with several cards I have but I would get similar response stating that the video card is the problem.

The bios I got from techpowerup should be the same as the one from my video card, it is just not verified. The original bios did not work with any of my computers. When I power up the pc, the system will power up and the gpu leds(above the pcie power connectors) will light up blue, the computer will get stuck in post/boot, the monitor will never display anything and the gpu fans would stop spinning. So that’s the reason I had to flash the bios with a new one from techpowerup.

The original bios does not boot up at all, I can update the gop but it will still not be able to boot.

I found out some settings from my monitor has some effect of the csm option. When I turn off Auto Source (auto select input), csm will always be enabled either cold boot or warm boot. If this option is on, csm will stay enabled in a warm boot.

Yeah I do not know what to change with the polaris editor lol but my initial thought was that the previous owner had modified the bios which would have caused the gop driver to stop working and not be able to boot.

Currently I installed again my rx 480 and still has the same issue. This issue is problematic with displayport. I have tried hdmi and dvi and they actually work which csm stays disabled with secure boot on or off.

Thanks again, I’m gonna keep searching and testing to see if I can find a solution. The only “workaround” I found was enabling secure boot when I get the chance to turn it on.

So, this is a motherboard BIOS issue then, not the card itself or it’s vBIOS (The CSM / Secure Boot stuff I mean)

The BIOS you are using now is the same as the original BIOS, that is what I meant, but, you it doesn’t have now (and maybe didn’t when you downloaded either) the same updated GOP.
I’ve seen many cards not work on a system at all, until GOP was updated. So I was thinking maybe if you update the GOP same on your original dump as you did the one you downloaded, then that original may work too.
But, you now say you tried that, so yes, I guess something else is wrong or too old etc. Maybe something to do with what I circled?

Monitor settings shouldn’t affect CSM. Do you have GPU inside your CPU? If yes, do you have it disabled? If not, try with it disabled, this may have something to do with all this.

Sounds like you say then, some displayport issue. I’m not familiar with any of this, and had no clue a monitor setting or what type of cable you use would or could affect the BIOS in any way.
You’re going to have to ask about this kind of thing at a AMD graphic specific forum, I’m sure someone in those kind of forums would know a lot more about this. Somewhere here may know, but I’m not sure who to call in for help

This is the "ellesmere" bios file with same binary IDTF of the original dump and latest gop uefi table.

Thanks @Sylar76 - What is IDTF, and, do you think that is why the original dump wasn’t working?

IDTF is a specific BIOS identifier (like a checksum) but I don’t know if it could be related to the specific issue reported above.

I think his UEFI/CSM issue is BIOS settings related, or something else, since other cards also do the same thing.

He could try to post whole bios settings or try to update his own motherboard bios to the latest version.

I tried the bios that was upload but it seems the bios was corrupted originally. I was never able to boot with the original bios. I tried in my older system and it would not boot and get stuck in post like it did previously. I have updated to the most recent motherboard bios but still have same problem. I have contacted gigabyte (motherboard) and they keep saying that there is something wrong with by uefi gop structure. I mentioned that I tested with two other video cards and have same issue. It seems I am not getting anywhere with them. That was one of the reasons I posted here, thinking that my gpu vbios was altered and that it cause the gop driver to stop working.

Just want to thank you guys for responding and helping me. If I find anything new regarding this situation, I will keep you guys updated.

Please link me to your motherboard BIOS, or give me the model name, and I will check the BIOS.
Some BIOS may not have UEFI/EFI modules for all components, so you may not be able to boot Full Secure Boot / UEFI mode if there is only legacy rom for something.
Or there is both and you are choosing legacy rom version/type (RST I’m thinking here) and not knowing it, thus auto-enabling CSM because there is only legacy rom.

The bios from this post did not work since it was the one from the original dump from video card with latest gop driver but that bios never worked on any of my systems. So i flash with my previous one that I downloaded and it is back in working condition.

This is my current motherboard page, https://www.gigabyte.com/us/Motherboard/…support-dl-bios

This is my old motherboard page, https://www.msi.com/Motherboard/support/Z68AGD80_G3

I have installed Windows 10 using rufus with uefi option and my ssd is formatted as gpt.

The option in the gigabyte bios is CSM Support Enabled/Disabled option.
My old system has uefi but is very limited and does not have any csm options which works like legacy bios with GUI.

Here is X570 Aorus Pro WiFi modded bios with latest GOP Uefi table if you wish to try it.

I tried flashing the bios but it said invalid bios so I was not able to do it.

Maybe you could try using Intel Flash Tool (FPT or FPTW if you are under Windows OS). If you’re lucky and the flash descriptors are unlocked you can easily flash your eeprom with the provided bios above.