Will the Z370 chipset support/recognise a v14 RST package?
I CAN inject the RST package extracted from an asus.com Z270 (RST v14) or Z370 (RST v15 through v17) BIOS image, v15 through v17 package DOES appear in UEFI settings after flash & reboot.
Any inserted/replaced package earlier than RST v15 does NOT appear in UEFI settings after flash & reboot.
I CANNOT inject any of the earlier RST v14 orom.bin packages from this site.
Am I missing something?

Never saw users injected RAID OROMs from Intel 8 Series (RSTv14) or older (7 RSTv13/6 RSTv12) in Intel 300 Series… there were not designed for working with such modern chipsets, can say no surprise here.
Currently and last UBU version will open the bioses from your motherboard.
The AMI tools “leaked” around the web are not up to date with modern releases of AMI V Core bioses, use UEFItools, IFRextract and other tools to deal with it. 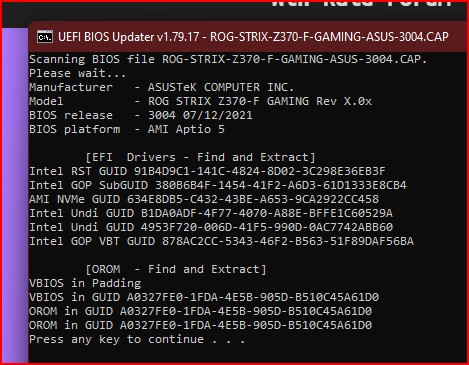 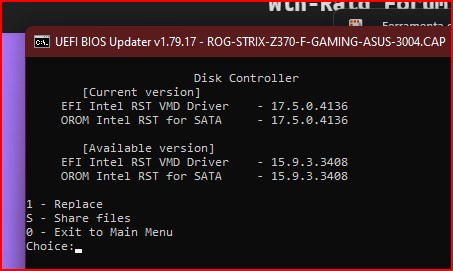 EDIT: Yeah…must be it, good luck.

Hi MeatWar.
Not an expert on BIOS, assumed that the RST driver package would be pretty much platform agnostic.
And would have worked on a later chipset, big assumption on my part.
But I’ll try IFRextract, to see if I can get any further.
The MMTool FFS error implied perhaps a checksum issue.
This is why I tried UBU, but the script is looking for the CSMCORE module name, and the Asus Z370 BIOS images only have three sections that are named.
DummyMSOA, RaidDriver, ACPIPlatformFeatures.
Had to find CSMCORE from its GUID, although it’s the RaidDriver section I’m apparently interested in.
Thanks again.

The UBU v1.79 images in your post opened some doors.
It loaded the BIOS, but advised required files were missing from the RST folder.
The readme.txt pointed toward the SATA .efi driver, inside an FFS wrapper.
I put these and the orom.bin into the files folder, and the original 3004 bios into the root.

The tools are working fine, the BIOS images and the SATA/RST drivers are good.
Perhaps one of the following?

Finally figured it out, thanks to a throwaway comment on another forum.
Seems the Kingston 240GB SATA3 SSD was formatted out of the box, so all space was already allocated.
RST couldn’t find an unallocated SSD volume, so it didn’t bother to display the acceleration tab.
Would have been nice if the tab had still been there.
At least I’d have known it was supported.
And it would have pointed me in the direction of the SSD status.
Extracted RST/SATA drivers v15.8 from the older BIOS, and replaced the v17.5 modules in the latest BIOS, seeing as RST stopped supporting SSD cache after v15.9.8.
Rebooted, then installed the RST GUI v15.9, and lo-and-behold, the acceleration tab appeared.
It’s not a perfect solution, but chucking in an unused SSD improves access times a bit, at least until the cache fills up.
And this was an affront to my techie abilities, so I was determined to make it work, regardless of whether it was worth it or not.
Thanks for the assistance guys.